Why I Stopped Being Gluten-Free

Since moving to Chicago (and shortly before), I have loosened up on my stringent gluten-free lifestyle.  I have plastered these posts with pictures of sandwiches, pizza, and  donuts.  If you have been reading for awhile you know that I did an elimination diet some months ago to see if gluten was the culprit behind my randomly distended stomach issues.  After 4 weeks, I didn’t notice a huge difference, but stuck with it just to be safe.  When I reintroduced it to see how I reacted, I came to the conclusion that gluten didn’t have a huge effect on me, but when I didn’t have it I also was free from a puffy stomach.

Briefly, gluten is a protein that is found in wheat, barley, rye, and triticale (a newer grain).  It acts as a binder that helps foods maintain their shape and elasticity.  Before jumping into the why of my decision to devour gluten in all its forms, I want to clarify the difference between celiac disease and gluten sensitivity. The following table also illustrates some facts about wheat allergy, which is even less prevalent. 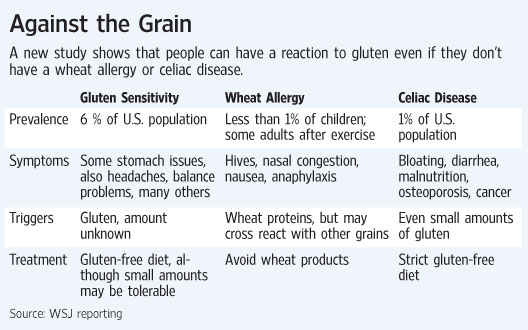 I do not have celiac disease, or my decision to eat gluten again would prove idiotic, but I did suspect that I had some type of gluten sensitivity.  I had had this stomach issue for years and I couldn’t pin point what was causing it.  There never seemed to be a common denominator between when I would eat something and when it would look like I was a few months pregnant.  I had seen pictures of people who were sensitive to gluten and after eating it, they looked like me.  I think I wanted gluten to be the culprit so I found ways to convince myself that it was.  I didn’t experience any of the other symptoms of gluten sensitivity such as balance issues, brain fogginess, or headaches.

I felt that the less I ate gluten, the less puffy I felt, but what I now attribute that to is finally eating the way that my body wanted me to.  I ate a lot of quinoa, salads, fish, eggs, and very little carbs such as bread and pasta.  After eating gluten-free for a few months, I realized that my body simply performed better without so many carbohydrates.  It wasn’t particularly about the gluten in them.  If I wanted to have some pizza, I would have pizza.  If I had an occasional sandwich, I was fine.  After awhile it seemed like too much work when I didn’t medically need to avoid it.

Since being here I have had my fair share of bread products in all their delicious forms and my stomach has not revolted.  The only thing that I know to cause it is milk, especially raw milk, and I have the pictures to prove it.  So my game plan is just to limit the amount of carbs I have in general.  No, I’m not going all Atkins crazy, just shifting my proportions.  Fueling during race training was interesting, but I made it through with a lot of baked potatoes and rice.  Maybe this time around I can grab some more pizza at Blaze.

Thanks for reading!  I’m also linking up with Amanda for Thursday’s Thinking Out Loud.

Update: I raised all of the money I needed for my personal training certification in 2 days! I will be signing up soon and barraging you with all sorts of information during the process 🙂

18 comments on “Why I Stopped Being Gluten-Free”