I am back from my whirlwind trip to Chicago this weekend and it is safe to say that I am looking forward to our move (sigh of relief). It would have been really inconvenient if I visited Chicago only to realize that I hated it.  Nothing could be further from the truth.  The city is great and I love all of the history and architecture.  Obviously I haven’t explored everything there is to do, but I know that there will be plenty for me to do and see once we get settled there. Anyone with any recommendations, please feel free to pass them along!

After I wrote my post on Friday at Neil’s current office, we made a trip to his new office which was a HUGE improvement.  The building is beautiful and there are lots of things to do in the vicinity.  I already know I will like visiting him at work since the doorman called me shorty right off the break.  Ballin.

After the quick stop at the new office, we headed to Hotel Lincoln to check in.  Apparently this hotel used to be a Days Inn that was eventually condemned, but the building was bought and transformed into this awesome hotel. 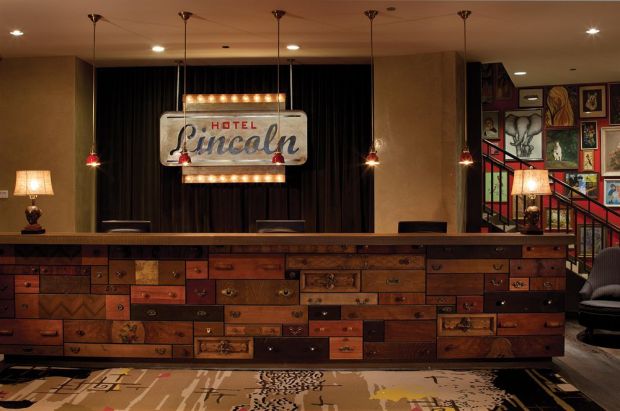 They have an attached coffee shop and restaurant, as well as a rooftop bar.  We went to the coffee shop, but didn’t end up eating at the restaurant even though it looked pretty amazing.  We headed up to the roof to see about grabbing a snack, but the wind was freezing, so I just snapped some pictures and ran away. 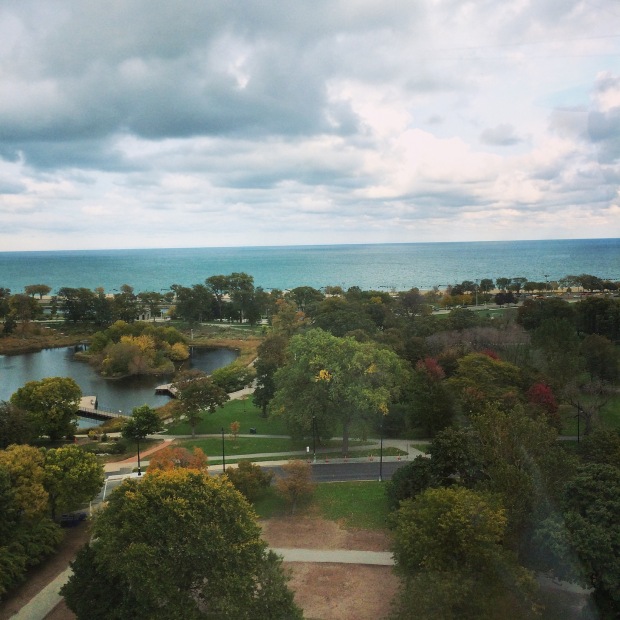 Once we were settled in, we decided to walk north to the Lincoln Park neighborhood.  The purpose of this trip was to narrow down which neighborhood we want to live in and Neil originally thought Lincoln Park would be a good choice.  Once we walked around it, however, we realized it wasn’t the best fit.  Since we won’t be driving nearly as much, we want things to be in a much closer proximity than they are in Lincoln Park.  There were also a lot of bars around which lends to a lot of late night noise and not my preference recovery-wise.

On our walk, I saw a Panera, but the sign read “Panera Cares.” I had never seen this before, but apparently some Panera branches offer food to the homeless and they are able to come in and get a hot meal with no judgment.  Way to go Panera!  You can read more about their mission here. 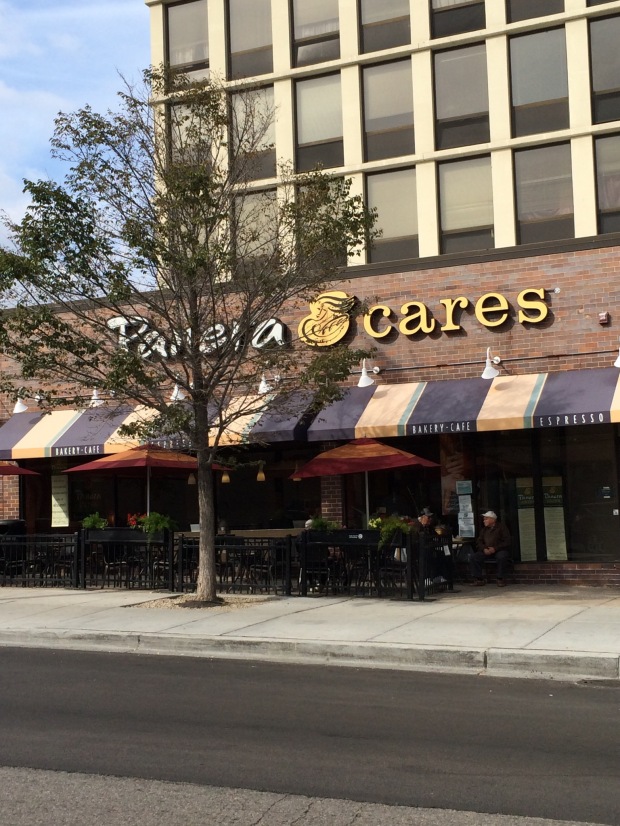 We headed back to the hotel and spent some more time on Zillow to try and find other neighborhoods that we might like.  We had tentative plans to meet with a realtor on Saturday, so we wanted to get her more updated information to help the search.  We found some more places near the West Loop just outside the city, so we sent those along and got ready for dinner.

We met Neil’s boss and his wife for dinner at a restaurant called Summer House.  It had a great ambiance and I got some pretty delicious food which I will be sure to recap on Wednesday.  We also got some more insider info from them about the city and things to do. 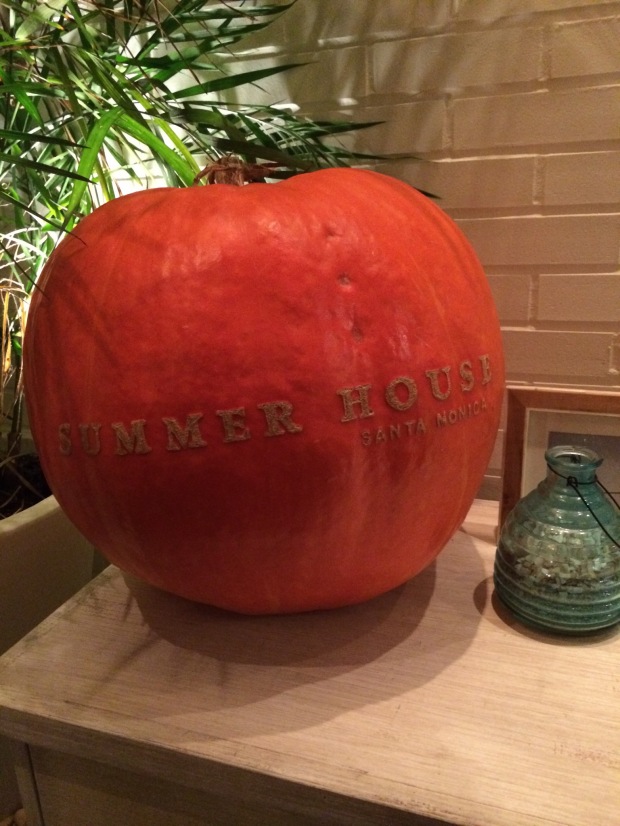 After dinner we headed back to the hotel and rested up for some more exploring in the morning.

There is an amazing farmer’s market on Wednesdays and Saturdays in Lincoln Park (conveniently right across the street from our hotel). If you are ever in the city and looking for some awesome foods, check out Green City Market.  What is great about this market is that it is year round and when it gets too cold it simply moves inside.  I’m really looking forward to that!

We got up early and headed over before our meeting with the realtor.  This market blew the VA ones out of the water.  It was much larger and they had a number of booths that made food so that we would be able to grab breakfast or a snack if we wanted.  We already had plans to try out a local breakfast place, but I’ll definitely be back there to sample all the awesome foods they had.  There was an abundance of produce since a lot of local chefs come to pick some up for various restaurants. 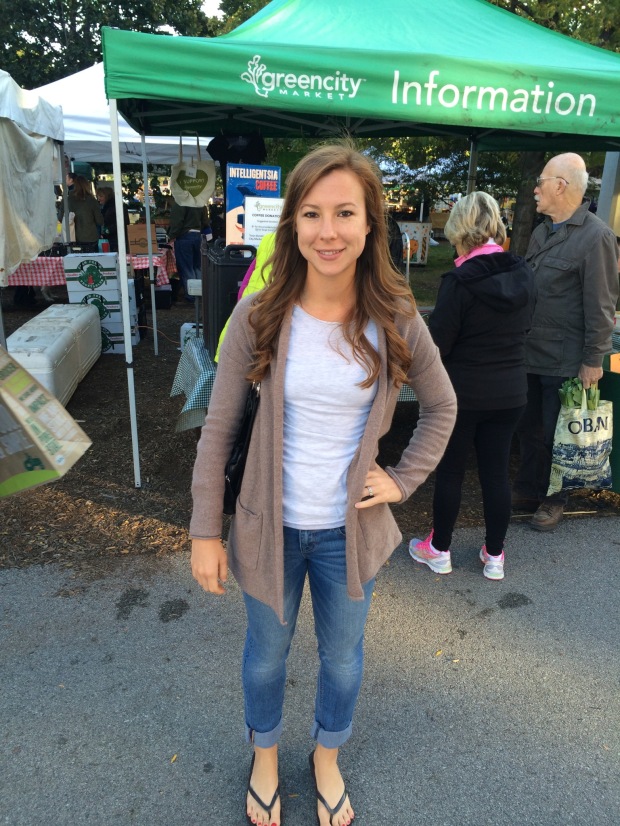 There were more varieties of apples than I have ever seen in my life.  Also an apple where the inside is pink! Whaaaaa? 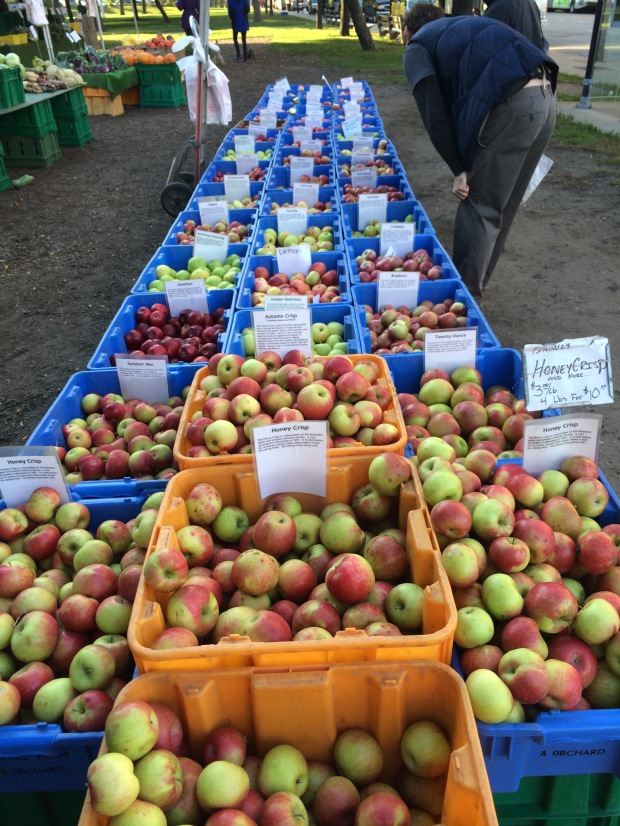 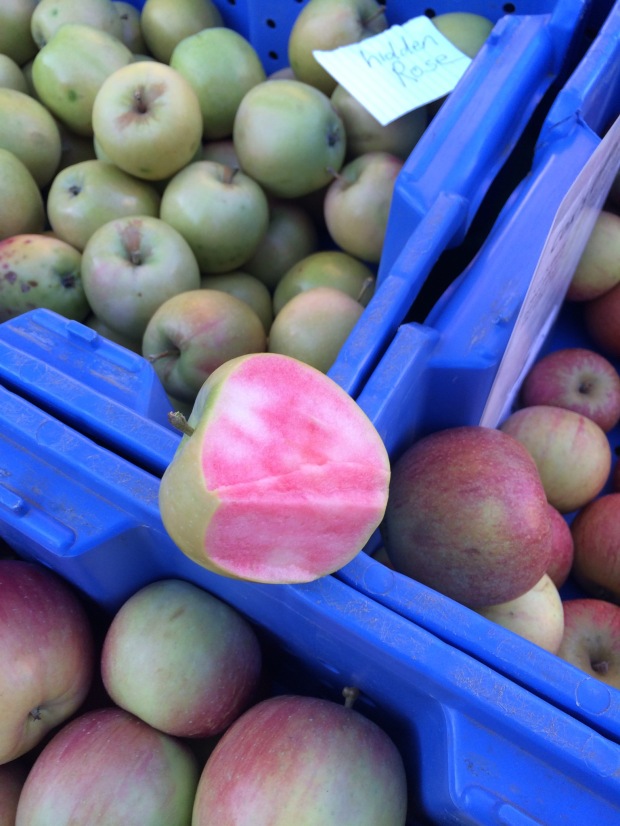 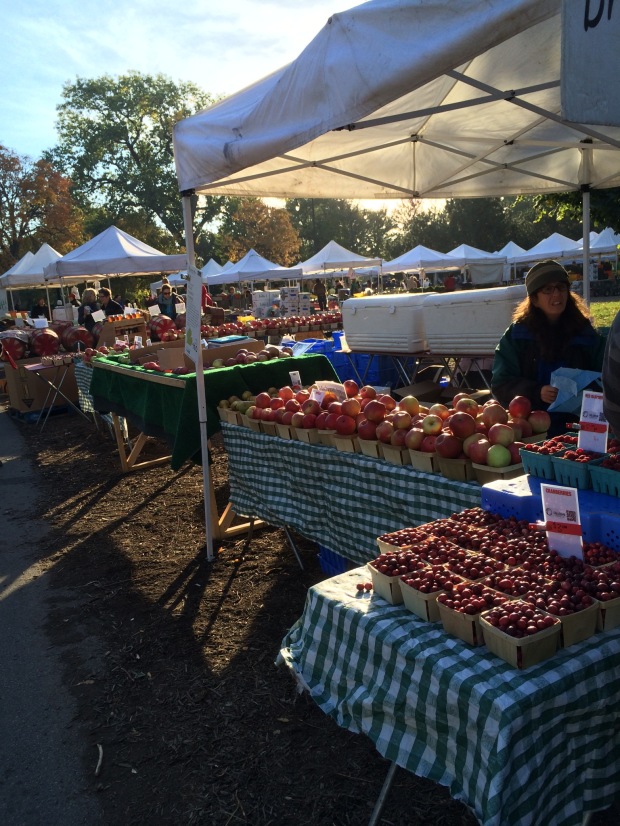 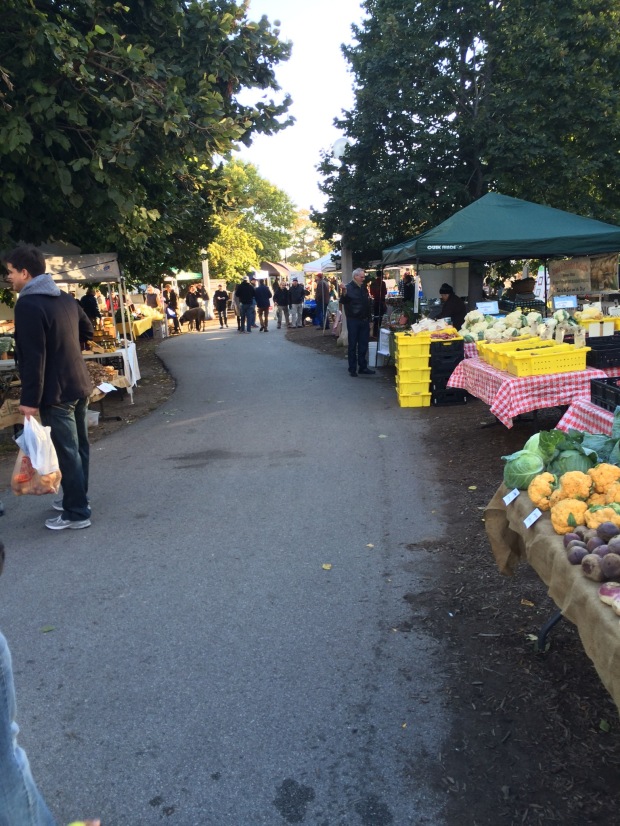 After our quick trip through the market, we headed to a place called Nookies for breakfast.  It was mediocre, but the omelet I had definitely kept me full until the afternoon. 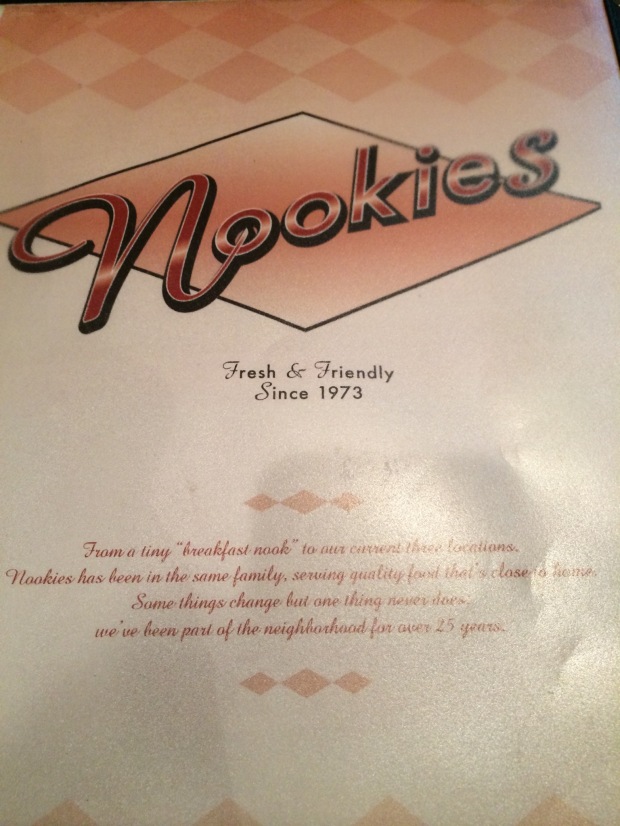 We walked south from our hotel to meet with our realtor at a Starbucks that was closer to the city.  We went through a few properties that she had brought and then hopped in her car to drive by the ones we liked.  It turns out that the one we liked the most was just north of the Loop, a neighborhood called River North.  We ultimately concluded that if we are going to live in a city, we should actually live in the city.

In any one of the high rises that are in that area, we can simply walk out and find the things that we want and need in a neighborhood.  My biggest thing was a gym and grocery store in the vicinity and this location offers plenty of them.  We are in short walking distance from food, shops, theaters, etc.  Now we know the neighborhood we want and I will spend time looking at places when we head there for our 30 days of temporary housing.

That night we went to a comedy show at the Laugh Factory.  It was an awesome time, but next time we want to go to smaller, less commercialized venues to check out local comics.  I’m glad that we got to experience it though since it is a landmark in a number of cities across the country. 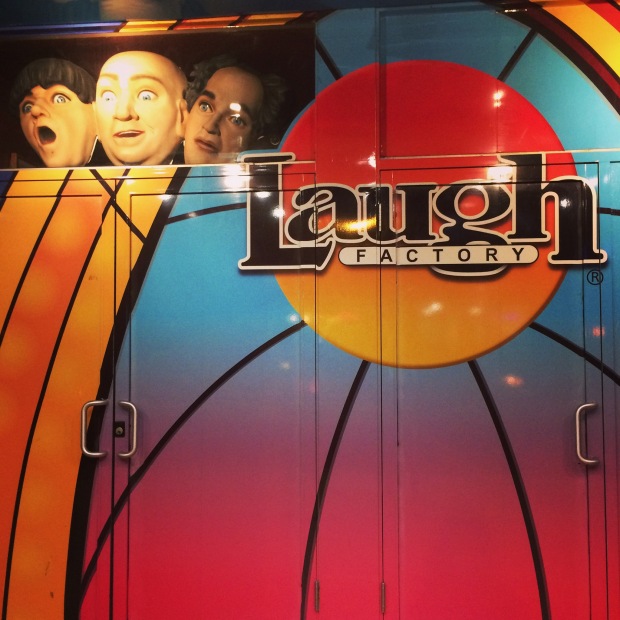 Sunday was the Chicago Marathon (congrats all of you who ran!!) and the streets outside our hotel were blocked.  We decided to walk down to a breakfast place that Neil had had before and recommended.  We did a LOT of walking this weekend which was great because I didn’t get to run at all.  There was so much energy around the marathon and I loved being right next to all the action.  It actually made me consider running it next year when we live there (who am I), but if I don’t do the full I will definitely be doing the half!

I grabbed a pumpkin BUTTER latte from the coffee shop at our hotel because I had seen this in a couple coffee places and thought it was fancier than a pumpkin spice latte.  I got it because they offered an almond milk option, but unfortunately they were out. I got it with soy milk because I HAD to have it, but I’m not the biggest fan of soy.  It was a good drink, but there were bits of pumpkin butter that I encountered and it was weird in my mouth (twss). 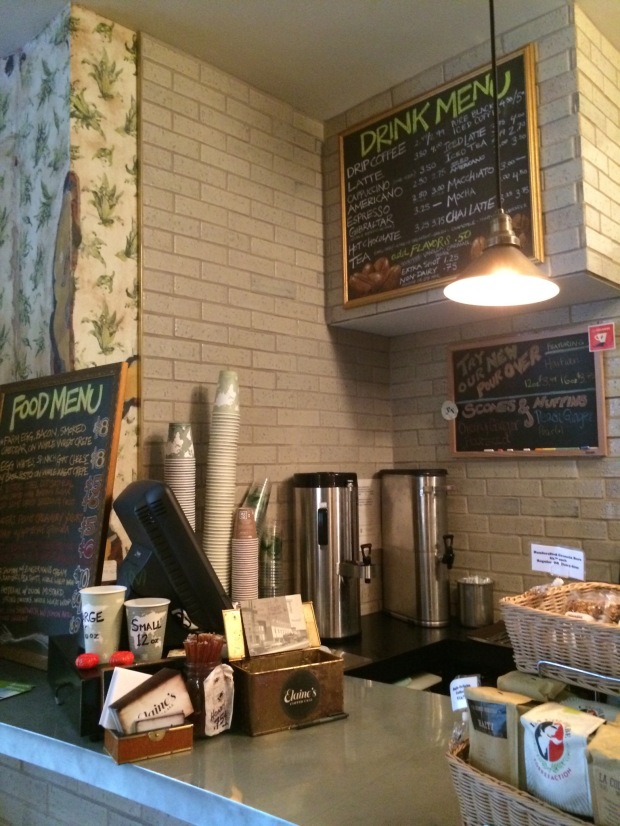 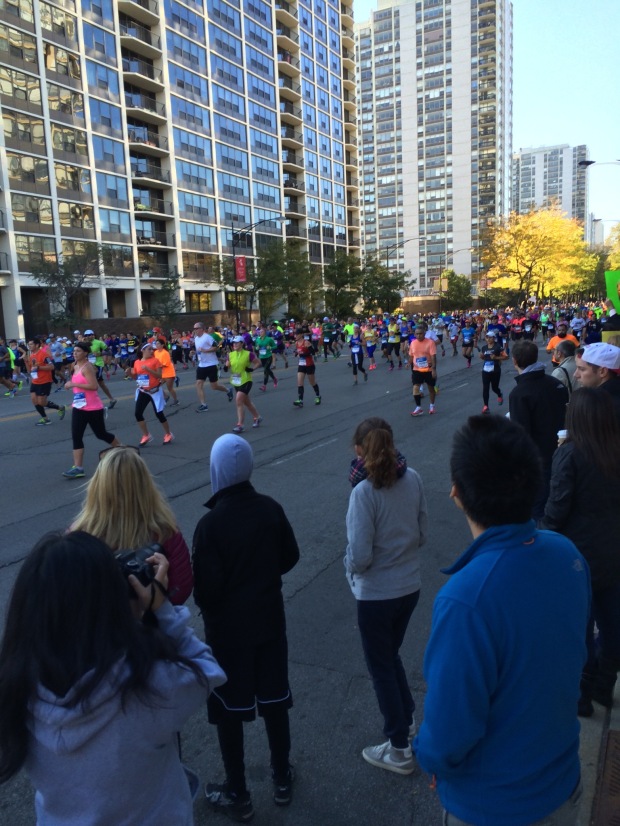 This is the city when a marathon is going on.  I am searching for pancakes while everyone else is running a marathon around me.  Priorities. 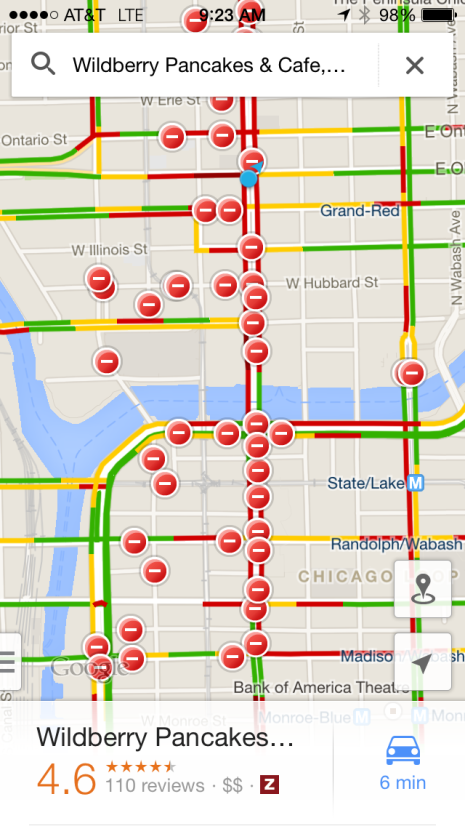 So as you can see, we ate breakfast at Wildberry, where there was a 45 minute wait.  This was my view from breakfast. Not too shabby. 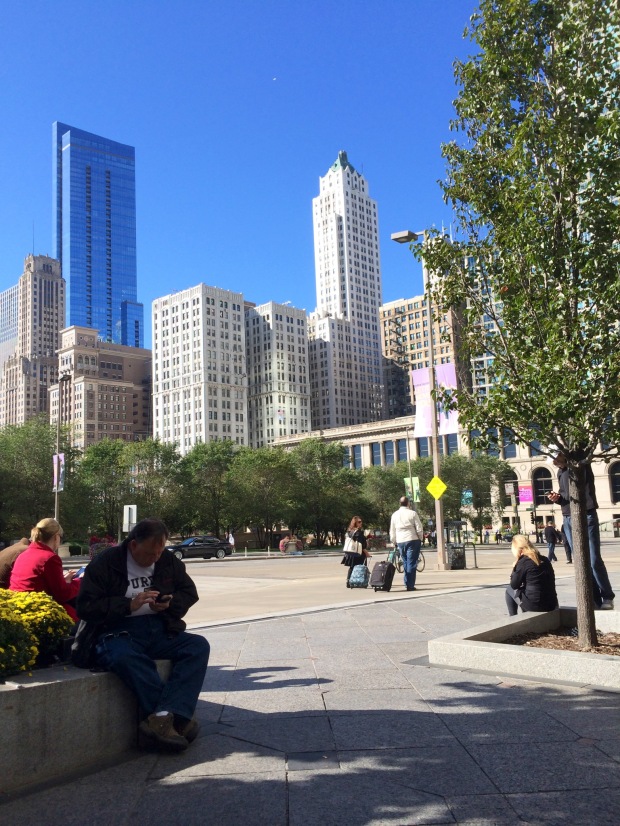 After breakfast, we hopped on the train and headed to the airport.  After finally getting to Chicago and narrowing down a neighborhood in person, I am feeling better about the upcoming move.  Still no firm date yet, but we have movers coming this week to give us estimates and then we will go from there.

My last day of work is this Thursday and then I will work on packing up the house/downgrading all the things we don’t need to take with us.  Thanks for following along on this journey and any moving suggestions are welcome!

Question of the day: What kind of coat do I get for Chicago?? Boots? Earmuffs? Heat trapping blanket?  Ahhhhh!