Chicago Museum of Science and Industry

Hello and welcome to part two of my weekend! I am trying to check off my list of things for new city dwellers to do before the cold gets too prohibitive.  It’s getting there–today it is 16 degrees with a wind chill of -2 degrees, so it is time to bundle up.

As I shared yesterday, I spent Saturday on a running tour of the city.  After talking some more with my tour guide, he offered to take Neil and I to the Museum of Science and Industry with his membership.  Note to anyone visiting the city: either grab a City Pass which gives you 50% off of the top 5 attractions in the city or make friends with a local who has a membership!

We arrived about 15 minutes before the museum opened and were able to buy tickets to the Treasures of the Walt Disney Archives.  Besides lunch, this was the only thing that we had to spend money on.  You aren’t obligated to purchase tickets to shows, but we thought this one would be fun since there is a tutorial on drawing a Disney character at the end.

During the holidays there are numerous Christmas trees decorating the great hall and each is decorated for a specific country.  Of course my favorite was the giant one in the center. 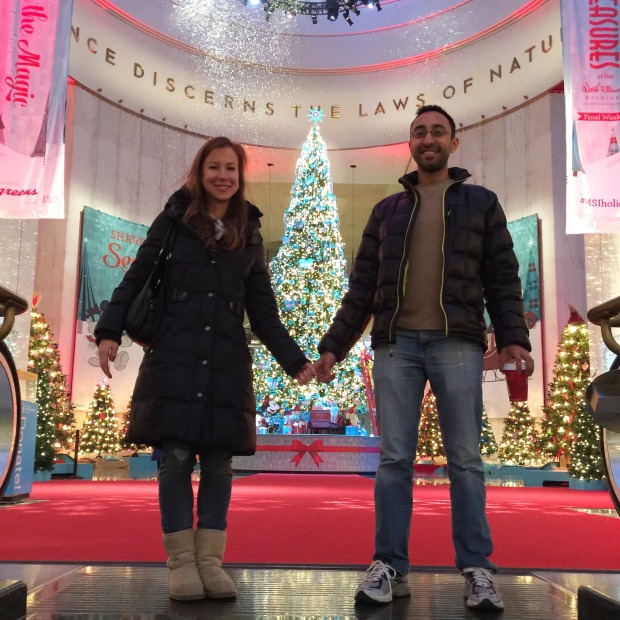 This museum is huge. We spent 5 hours here and could still go back to check things out in more detail.  We saw everything from the science of weather to antiquated bikes.  We had a few minutes before our Disney show, so we experimented with weather and Neil became a wizard. 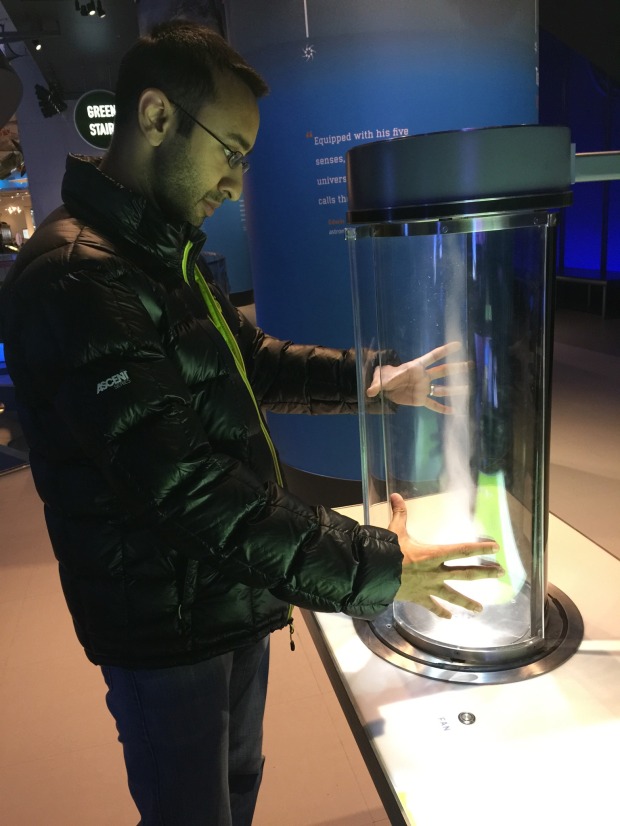 We headed to our Disney show which started at 10 am and walked through an exhibit of Walt Disney’s life and career. Check out this awesome Lego castle: 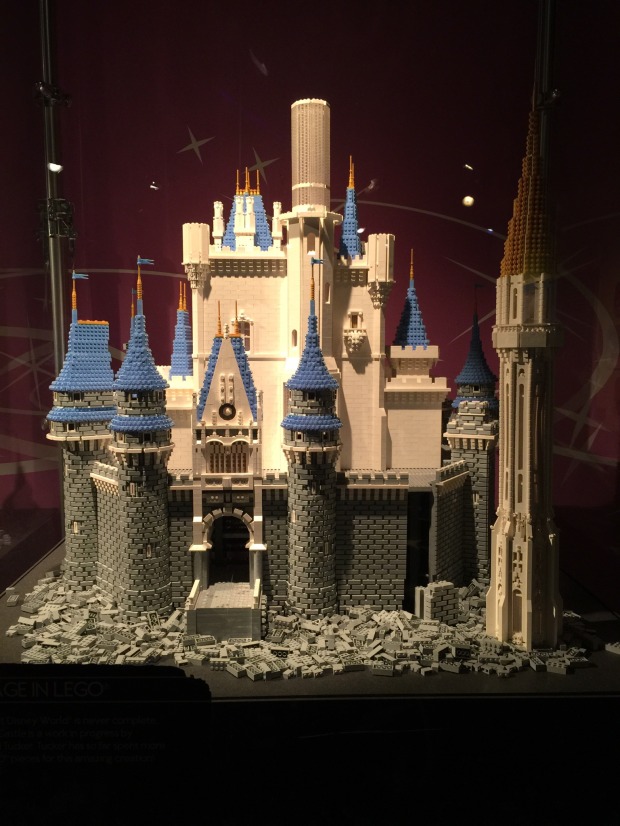 At the end of the exhibit there was a step by step tutorial on drawing Minnie Mouse.  Mine was passable, but Neil is clearly the better artist. 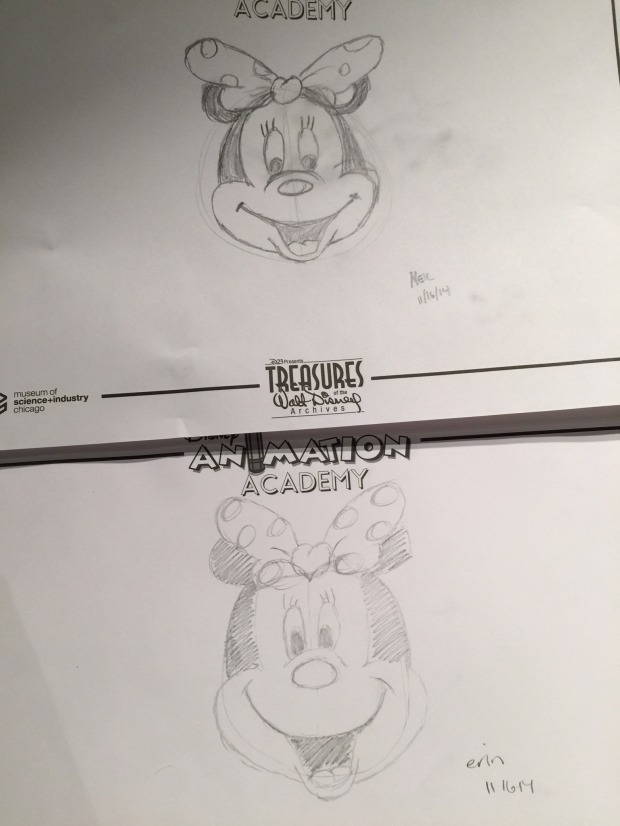 We checked out some more exhibits before heading to a very important show: Poop Happens. As we were informed by the attendants outside, Poop Happens is a 20 minute *childrens* show about digestion.  We were a little concerned when we were the only ones there, but thankfully a couple more families showed up right on time.  It was pretty cute and informative and all the kids (and us) had a great time.  Here is Neil graciously volunteering to be the rectum: 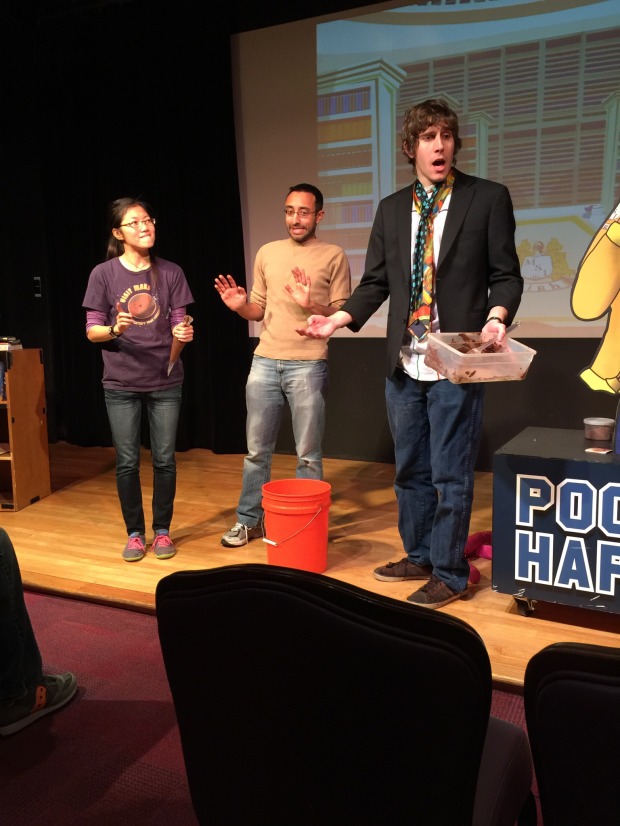 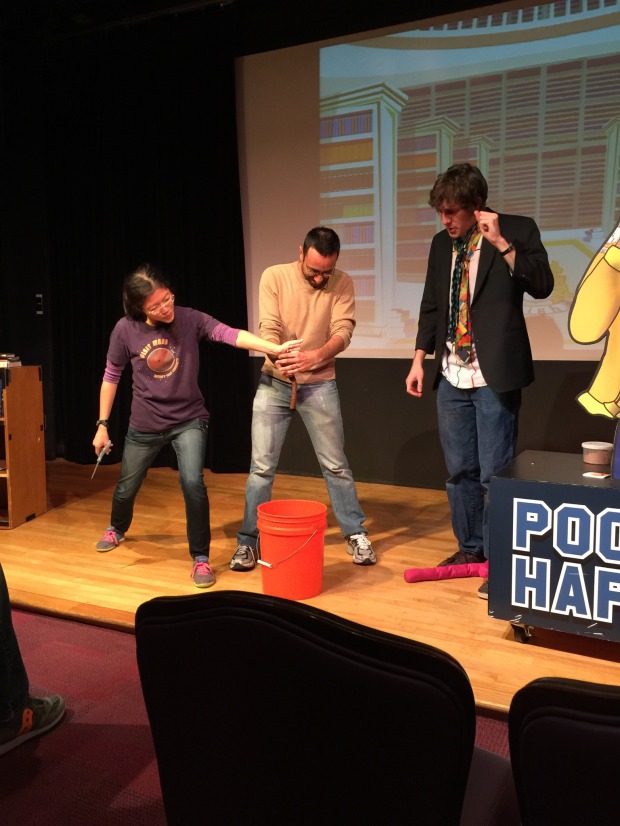 There is also an amazing model train set that takes up the better part of a room. I couldn’t get pictures to do it justice, but here’s a bridge: 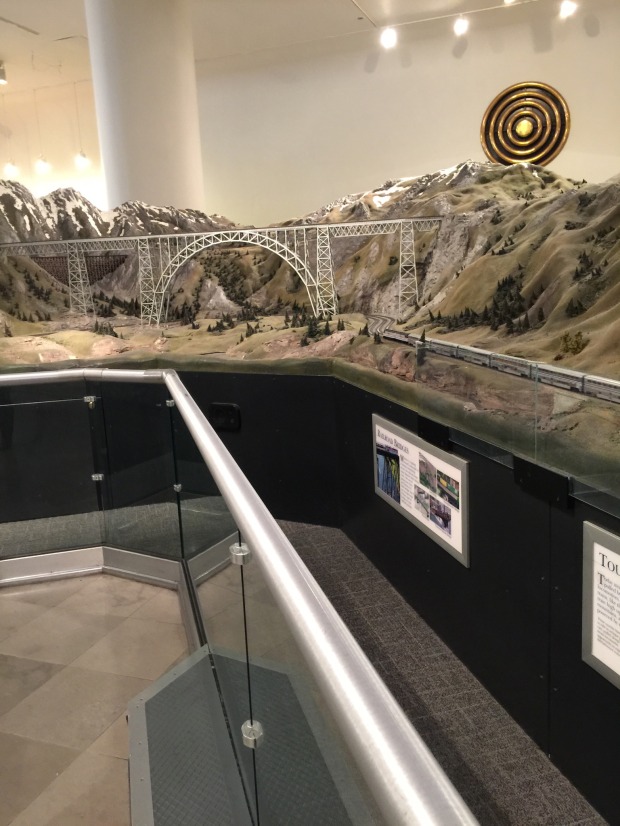 There was an exhibit on progressive and futuristic technology, including a vertical indoor farming model that would decrease the waste of land space and supplies (water, fertilizer, etc). 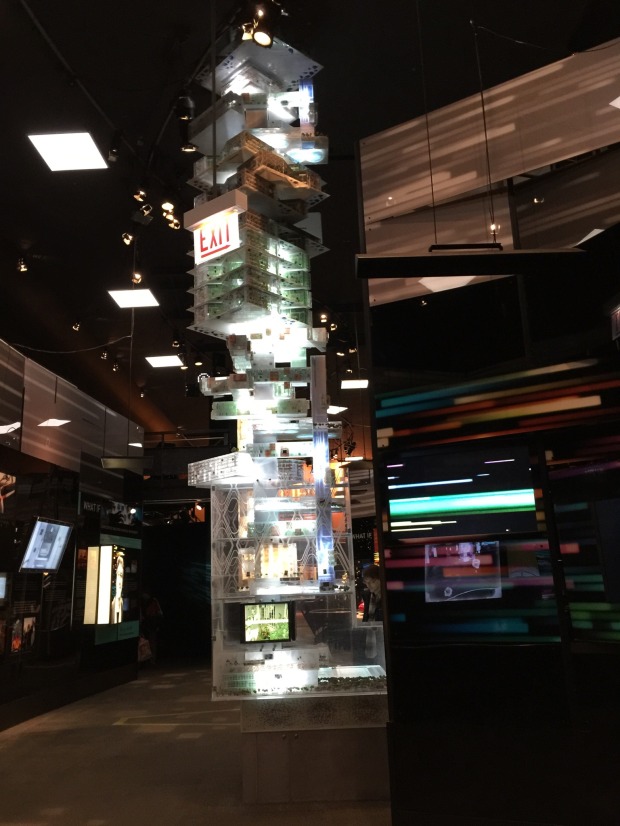 There was an exhibit all about farming so I sat on a cow. That child also wanted to get on the cow. 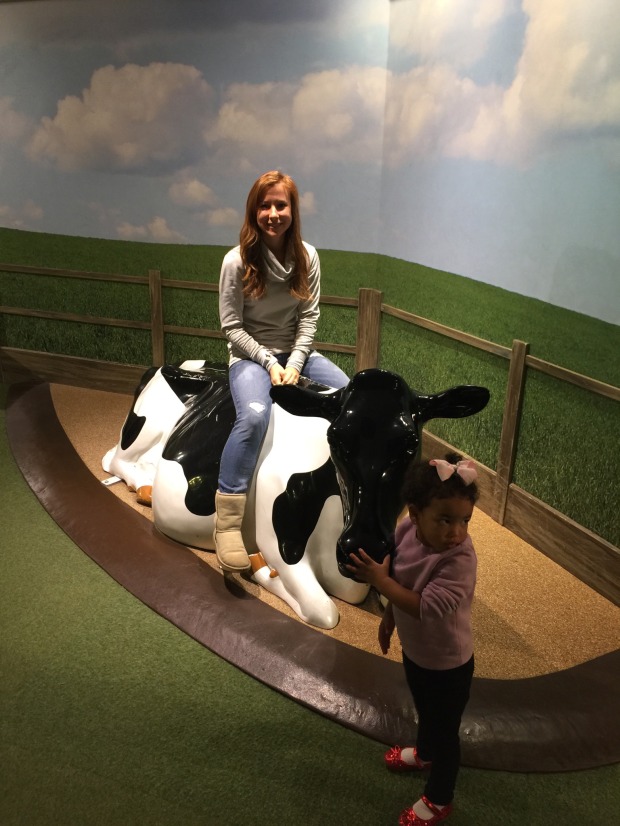 In the exhibit on DNA there are daily chick hatchings that you can view if you have the patience to sit and watch it. 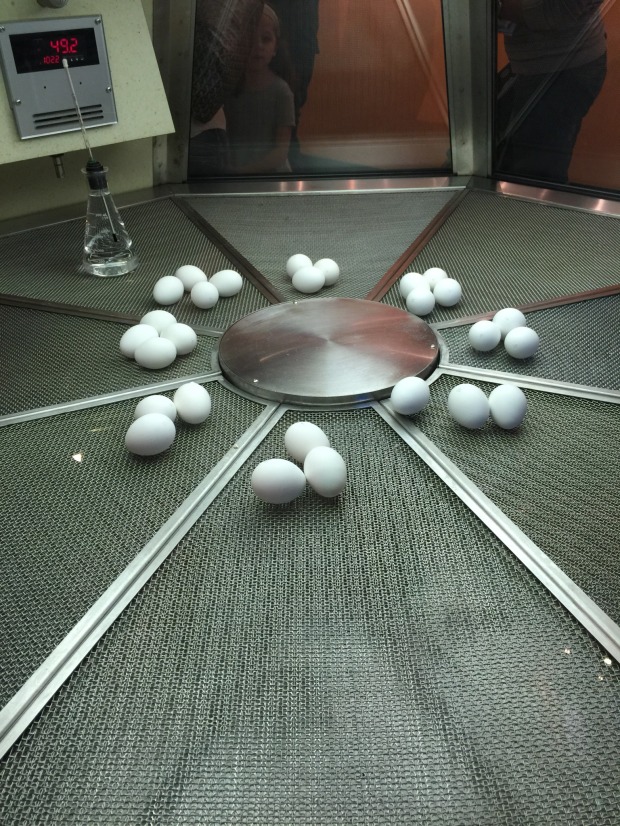 We got lunch at the  museum and I was impressed by their selections.  I opted for a kale salad with roasted root vegetables and a side of turkey chili. 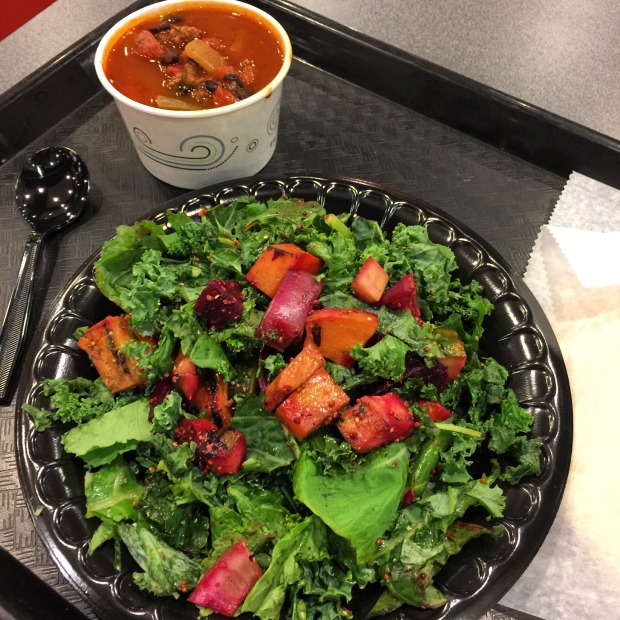 After lunch we wandered around some more and then called it a day.  I would definitely recommend this museum to anyone visiting or living in Chicago.  I have many more on my list, so let’s hope I can see some before it’s time to hibernate!

I am off to run some errands before the sun sets at 4:30 pm.  I went to the gym this morning for another LEG DAY and want to leave you with this reminder: a plank a day keeps the doctor away! 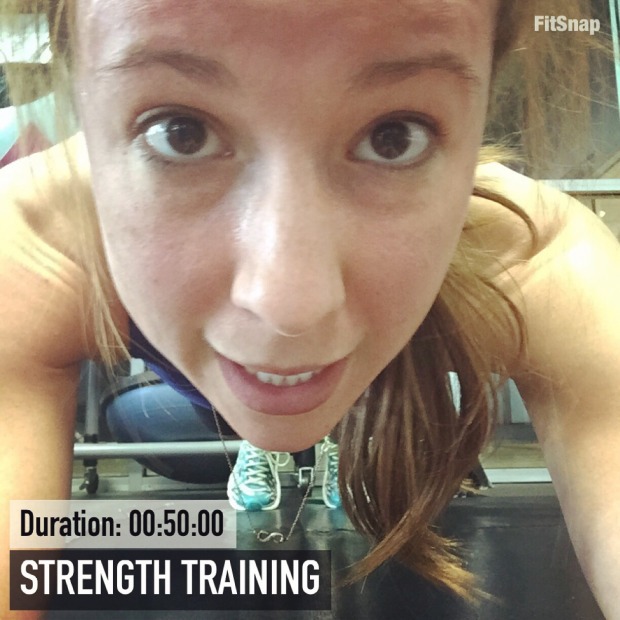 Question of the day: What are some of your favorite museums?

2 comments on “Chicago Museum of Science and Industry”