Hey guys! It’s snowing! Not that crisp, pristine snow that I can watch from my window while I sip hot chocolate, but the kind of snow that started as rain and is now some kind of mix between the two.  It is still fun to watch, but I know I have to go outside to acquire sustenance, Starbucks, and a stamp, so I should probably get that out of the way so I can get to some hot chocolate.

This morning has been a crazy time of trying to cross things off my to do list and dealing with all the things that need to be changed since we have moved.  I need to get my car registered in Illinios this week, so what better time to do it than before Thanksgiving? I have the best timing.  I plan to head into the office tomorrow equipped with every piece of documentation imaginable so as to avoid having to make a return trip.  Fingers crossed.

This weekend was probably the last glimpse of warmth that we will have going forward.  I feel like all of these paragraphs are starting off negatively, but I’m really not complaining.  It’s a lot of things to get done, but they are getting done so I am thankful for that.  I definitely enjoyed this weekend and hope that you all did as well! I went for another running tour on Sunday, but I need to wait for the pictures in order to share it with you.  Until then, here’s some of the weekend:

Friday night we headed to the west part of the city to have dinner at Sushi Dokku, a highly rated restaurant that we found on Yelp.  Since it was nice outside, we walked all around the city to get there and enjoyed seeing some new parts.  There were a lot of restaurants all in the vicinity of Sushi Dokku, so we may come back to try some of the other ones. 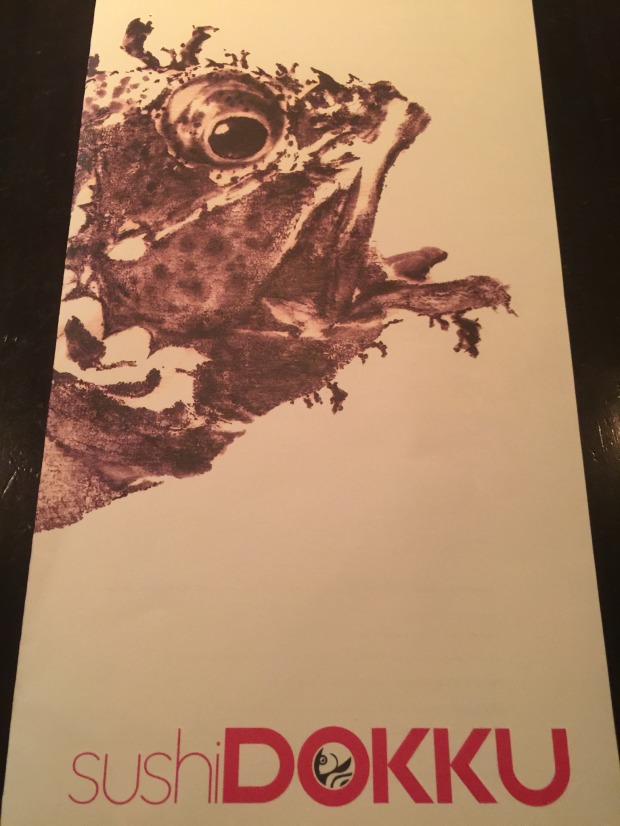 We got three maki rolls:

All three were delicious and different from the types of rolls we would find in VA.  While sushi in VA was good, all the rolls seemed to be the same or slight variations of a similar idea.  These rolls were new to us, especially the Tuna Microgreens and Ecuador which delivered a fresh crunch of greens. 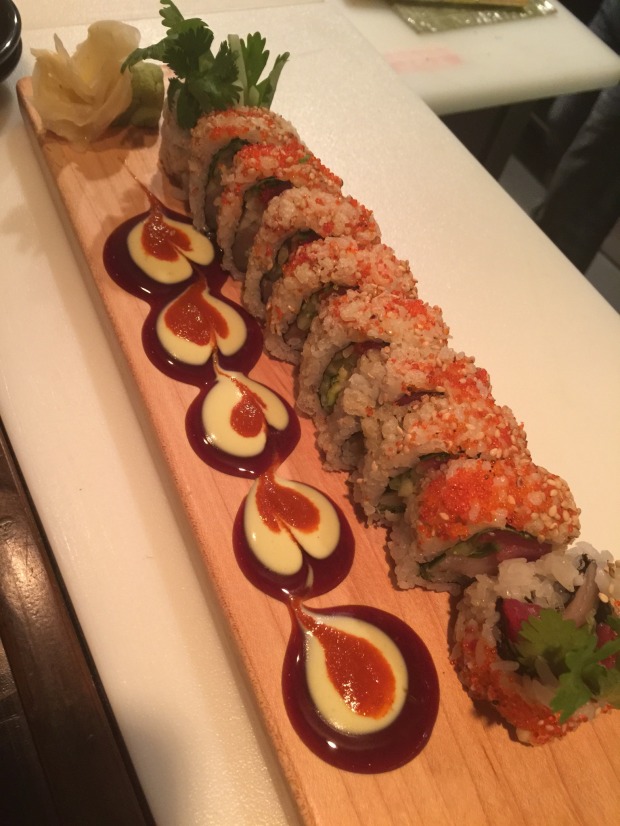 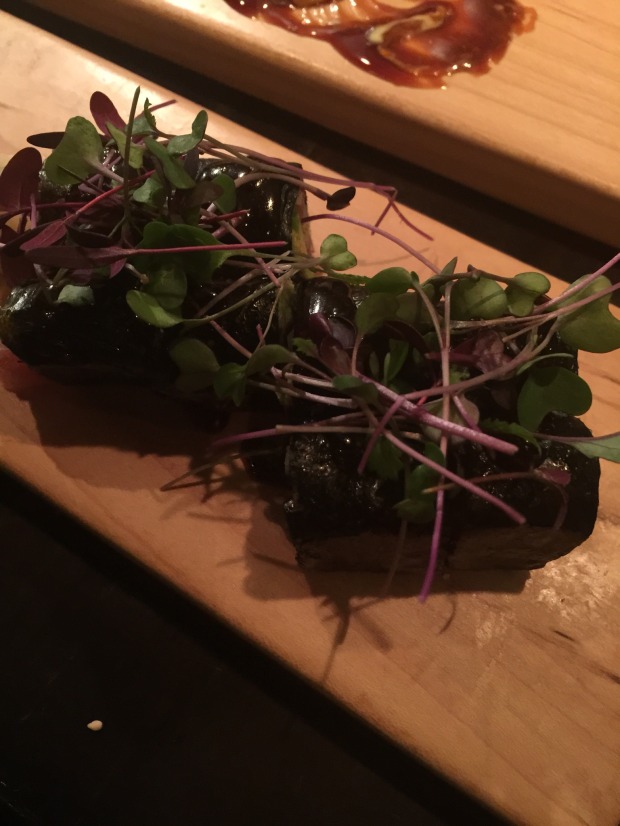 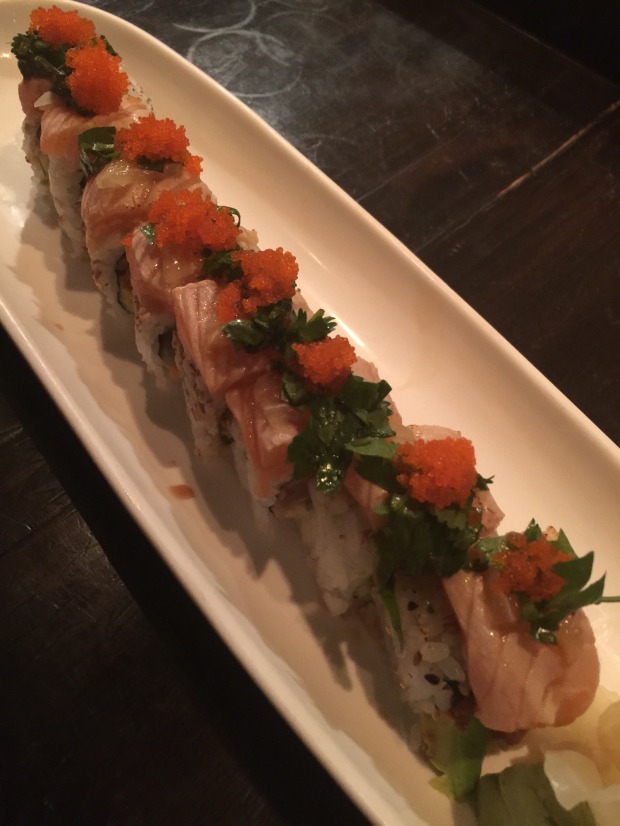 I returned my coat to North Face.  I guess all my research didn’t help me that much, because once I bought and wore the coat a few times, I realized that the winter coat I already had was basically the same and that the North Face one wasn’t so superior as to justify the price.

We knew that the Magnificent Mile Lights Festival was Saturday night, but we forgot about the parade.  We wanted to get pizza again at Blaze, which I wrote about before because it’s amazing and cheap and fresh.  The only problem was that we needed to cross Michigan Avenue where the parade was happening.  The only way we could get to the other side was to walk north to where the parade started, cross the street, and walk all the way back down.  It was a nice night and the mood was really festive and Christmas-y (yessssss), so we didn’t mind that it took us 3 hours to get back home. 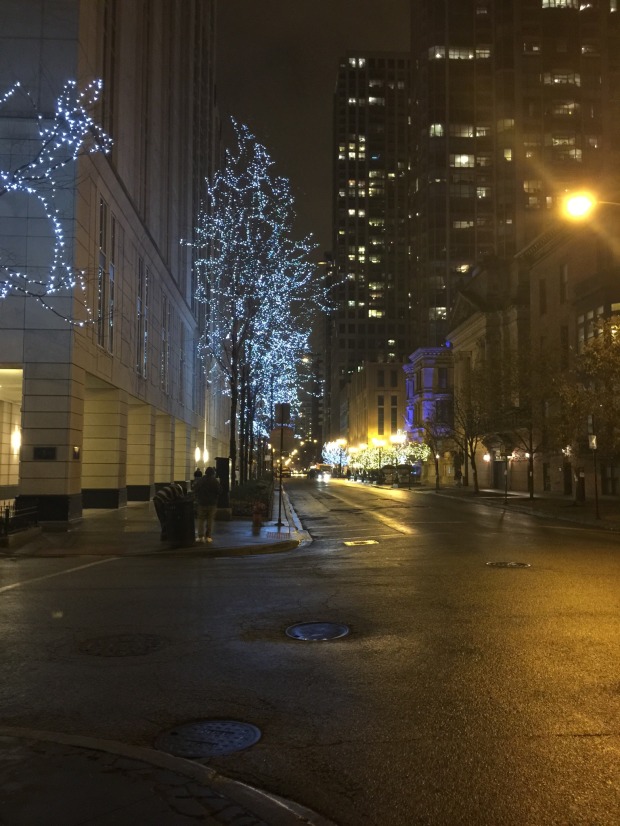 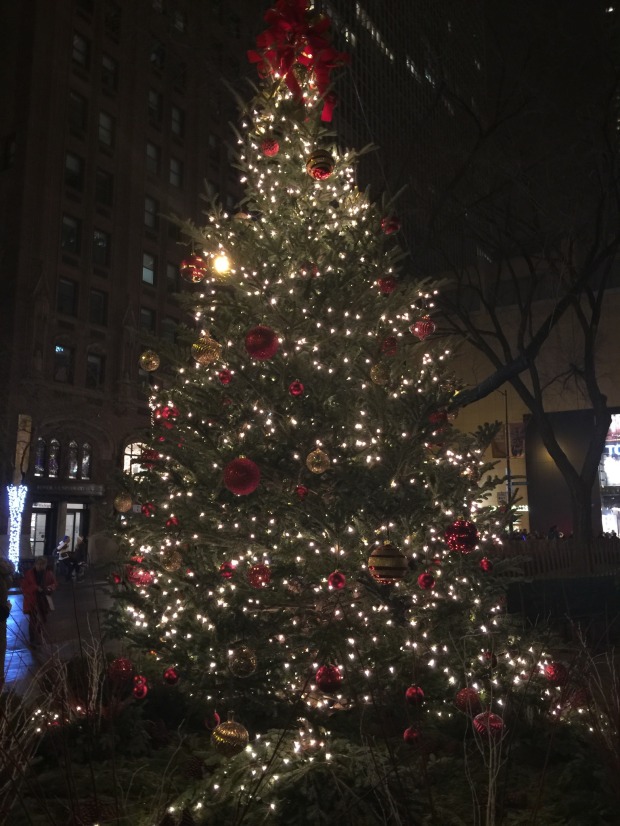 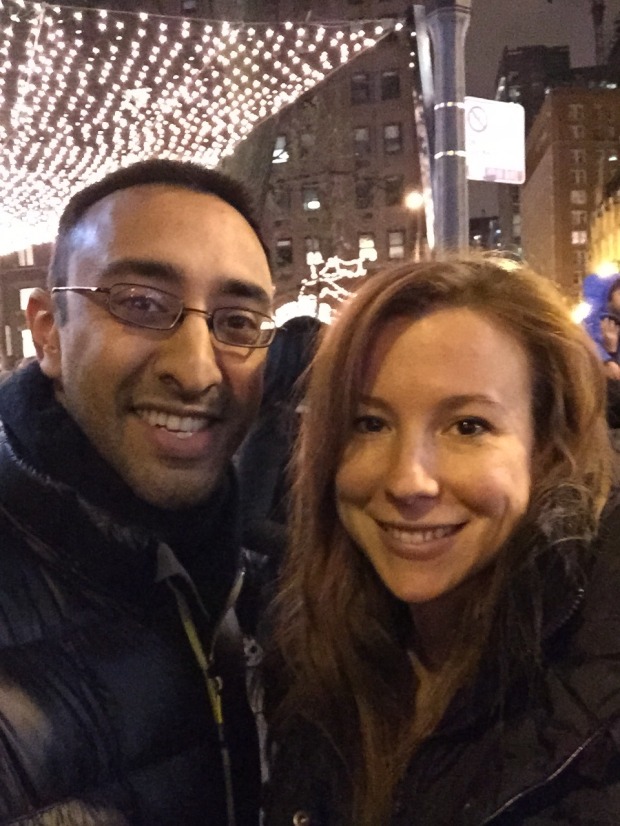 On our way to pizza, I found a new grocery store and had to explore. It was extra fancy fancy. 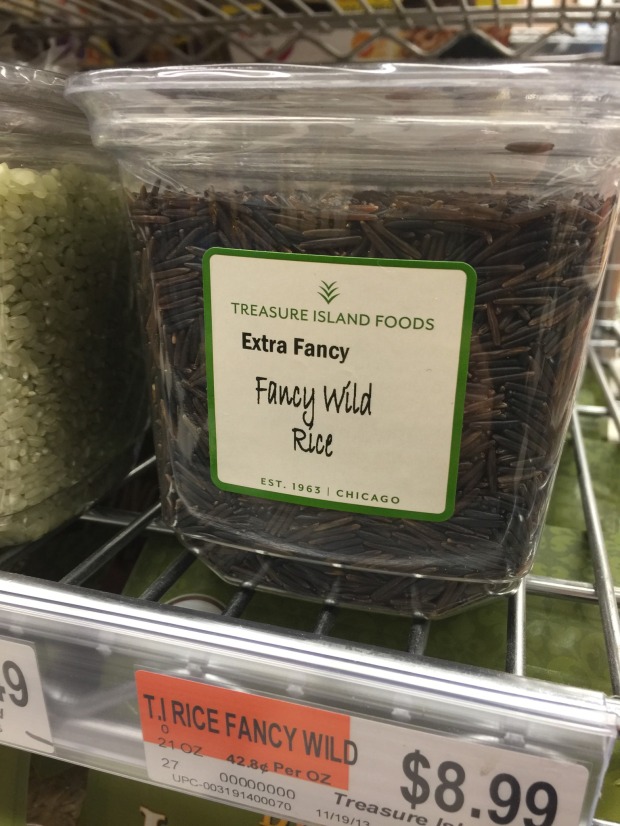 This grapefruit, chamomile, and cardamom drink was the bomb. 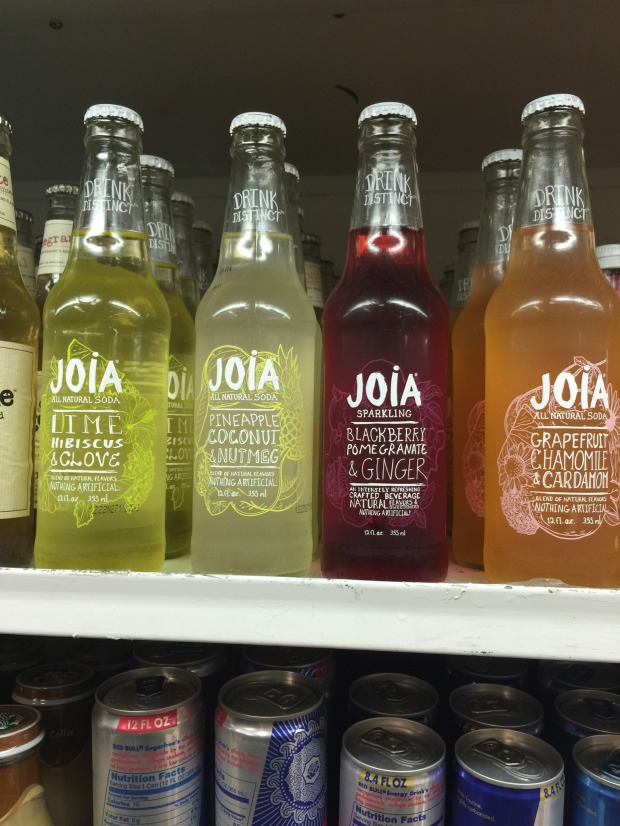 Butter and chocolate? Why yes, I think I will. 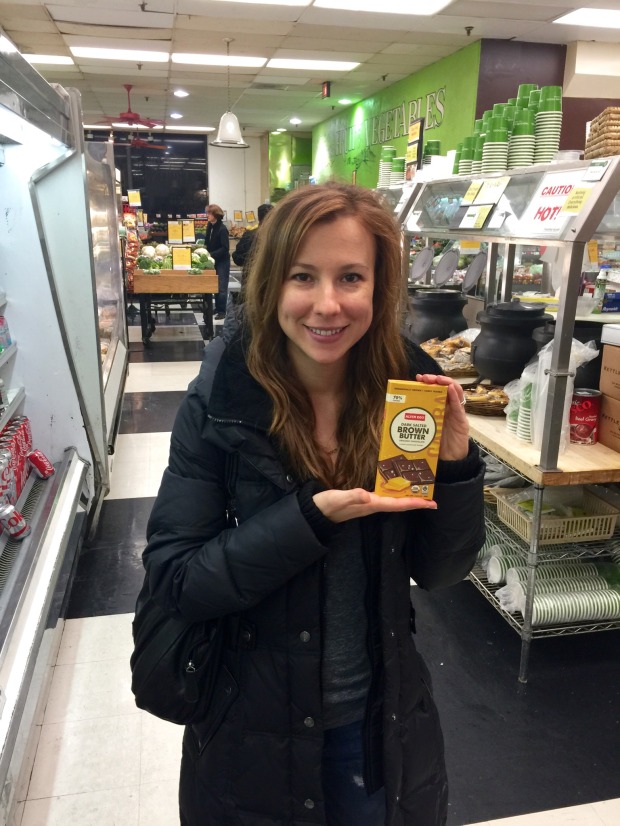 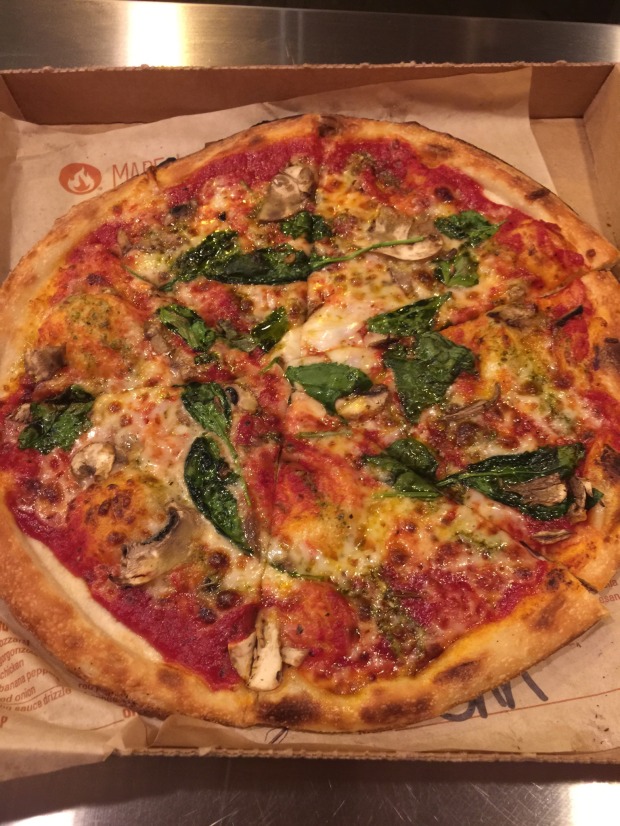 I went on another running tour (more to follow on that) and then we pretty much hung out at home.  Sunday is football day and after my run, we grabbed brunch and took the car to Costco for our biweekly trip. Realistically I would need to go every week because of the amount of greens that we go through, but we have taken to buying two weeks worth and freezing half of them.  Since we use them for smoothies, it doesn’t really matter that they are frozen, but I still think I prefer fresh, unfrozen greens in my smoothies.  Now that I live in a city, however, I am becoming too lazy to take my car out of the garage.

We lounged around until we decided to check out Portillo’s Hot Dogs.  I haven’t had a hot dog in quite awhile, but I was in the mood so I ordered one with everything on it (minus the pickle…gross).  After inhaling the hot dog, I checked out the stimulus overload that was the decoration. 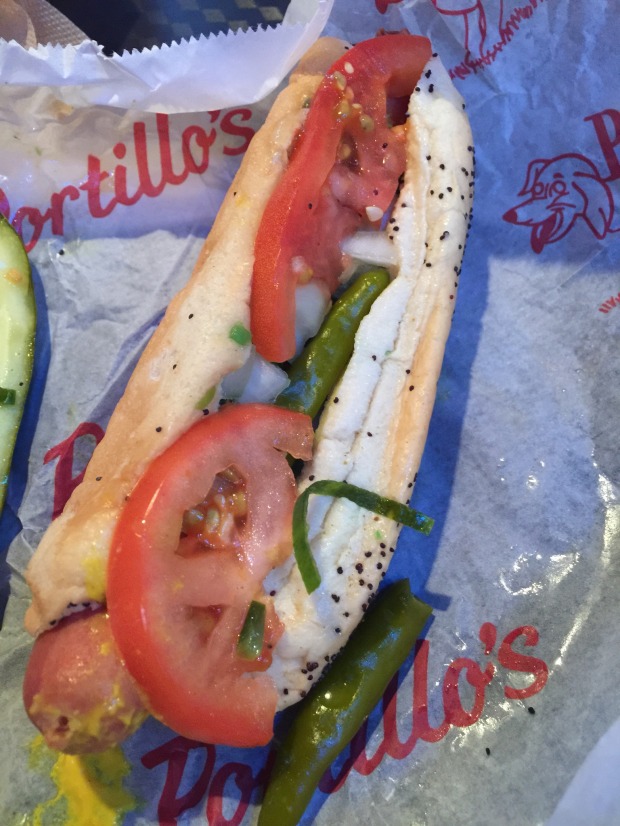 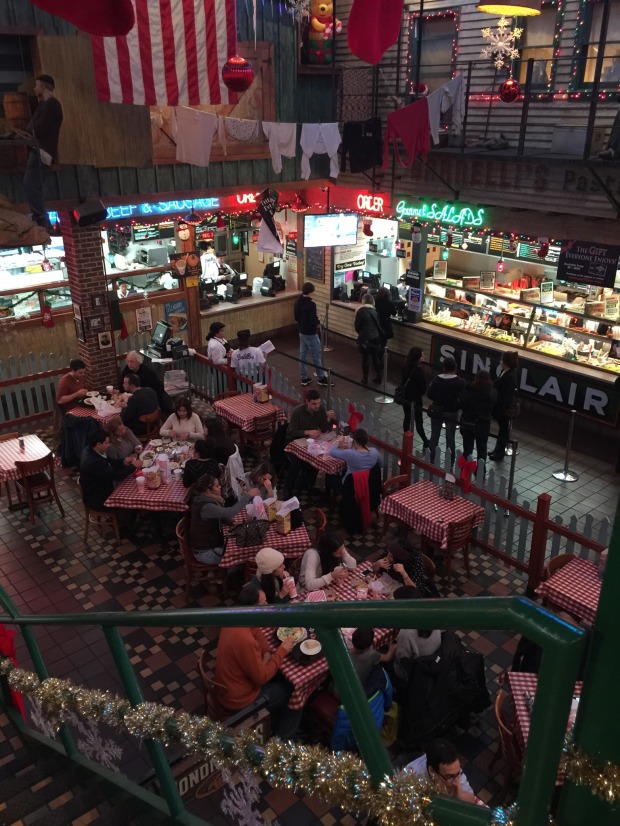 Then there was football.  For now, I am off to grab some lunch and make some more phone calls. Hope you had a great weekend!

Question of the day: What did you do this weekend?