Weekend of Warmth and Workouts - Erin's Inside Job Skip to content

Weekend of Warmth and Workouts

I hope your weekend was as nice as mine. Even though I had to work both days, I still managed to fit in some relaxation, workouts, and some naps.

Saturday morning I taught a free class at Athleta in Gold Coast. The studio where I teach was selected as their December studio of the month, so if you are looking for a free total body workout that will kick your butt, we are there the next two Saturdays at 8:30 am! 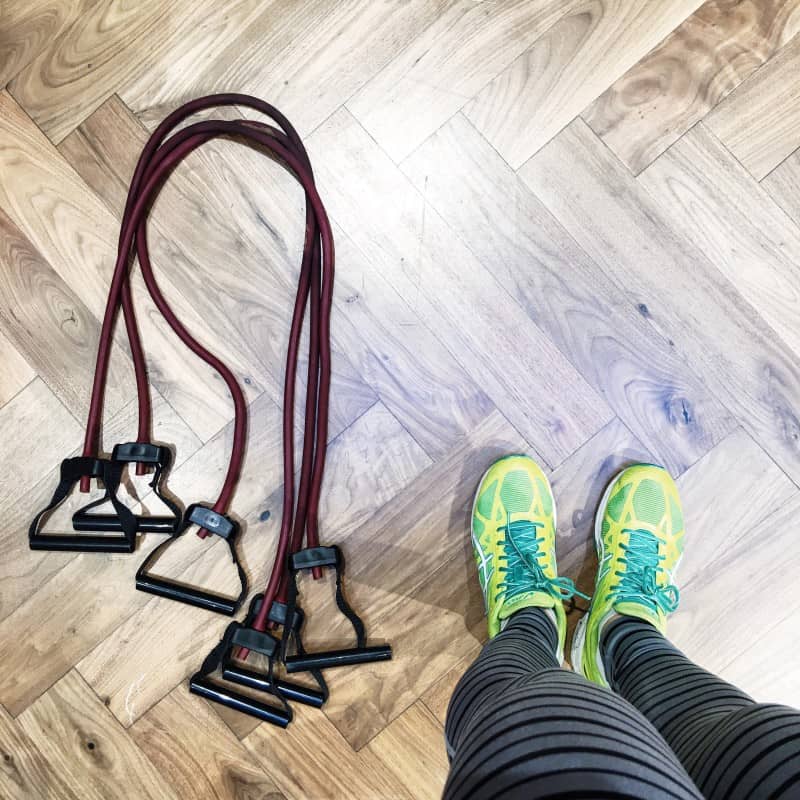 It was a little cold, but after walking for awhile it was manageable, so I headed north to Lincoln Park to wander around. I was attending a kickboxing class and had some time to kill, so I wandered around the park and snapped some shots. I miss all the trees and leaves, but it’s still nice to be around a park and water whenever I want. 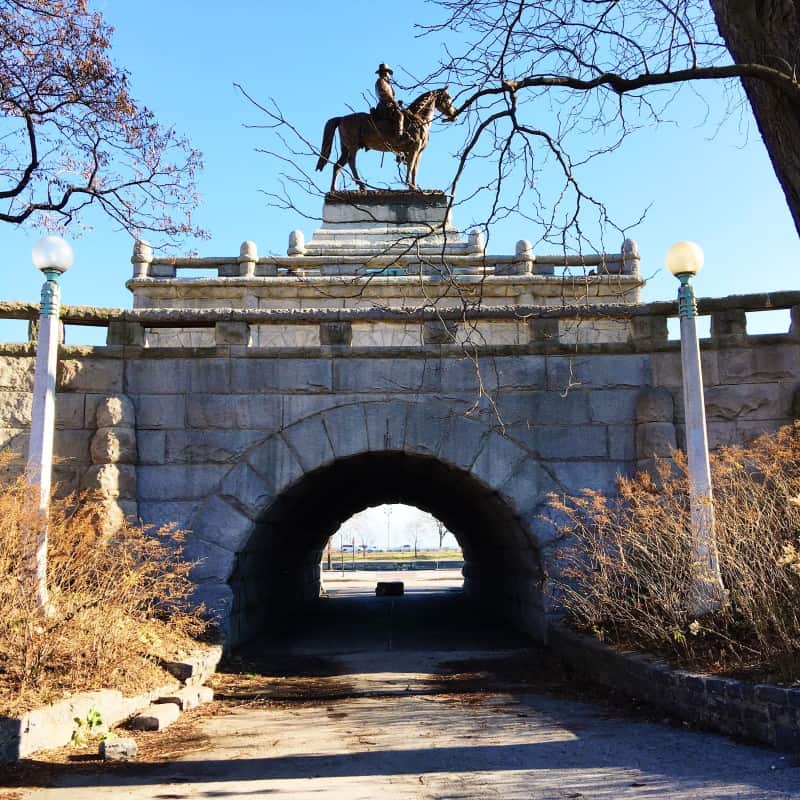 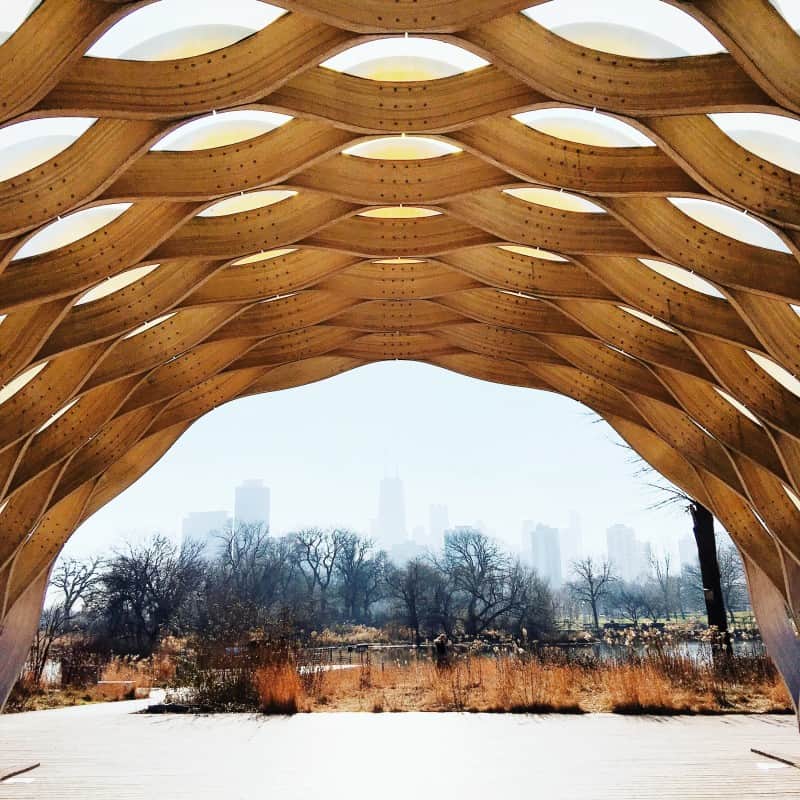 I didn’t grab any pictures of kickboxing, but I will say that I am struggling today since it’s a workout I don’t usually do. My arms and back are so incredibly sore which could make teaching an arms + core workout difficult today.

After the workout I made a stop into Elaine’s Coffee Call, a small coffee shop located in Hotel Lincoln. Neil and I stayed there when we came on our first house hunting trip last year and I had one of their amazing pumpkin butter lattes with real pumpkin butter in it. So good. This time I got a decaf almond milk mocha and it was magical. 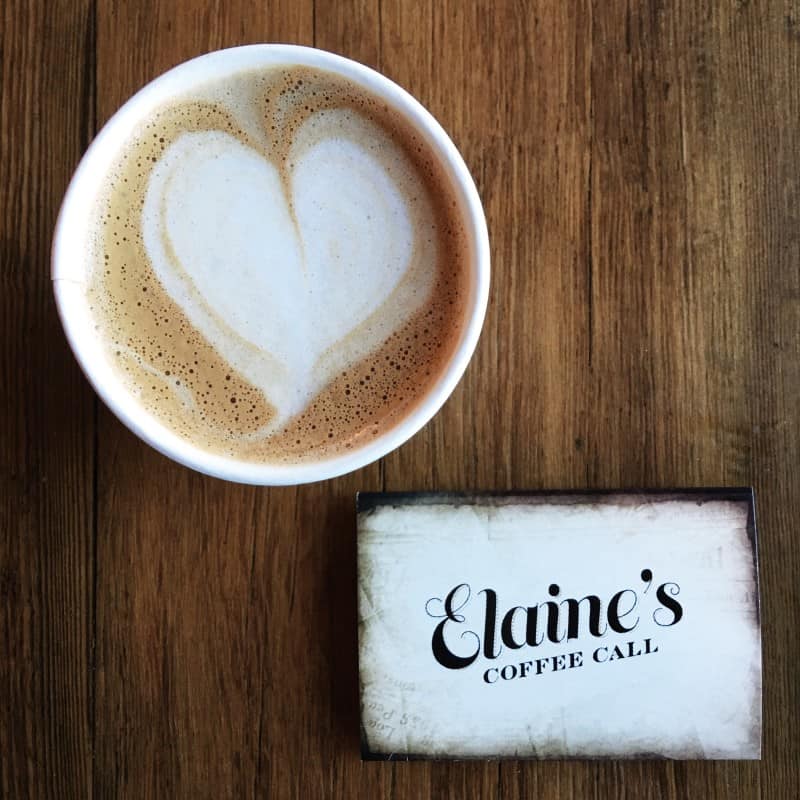 Even though I just went a couple days ago, Bath and Body Works had a one-day sale of their 3-wick candles for $8.50 a piece. I also just said that the large candles are too strong for our little space, but of course I couldn’t resist a deal and bought a handful anyway. The store was packed as well as the rest of Michigan Avenue and I had to scurry down side streets to take a less congested way home. Erin and crowds don’t do well together. 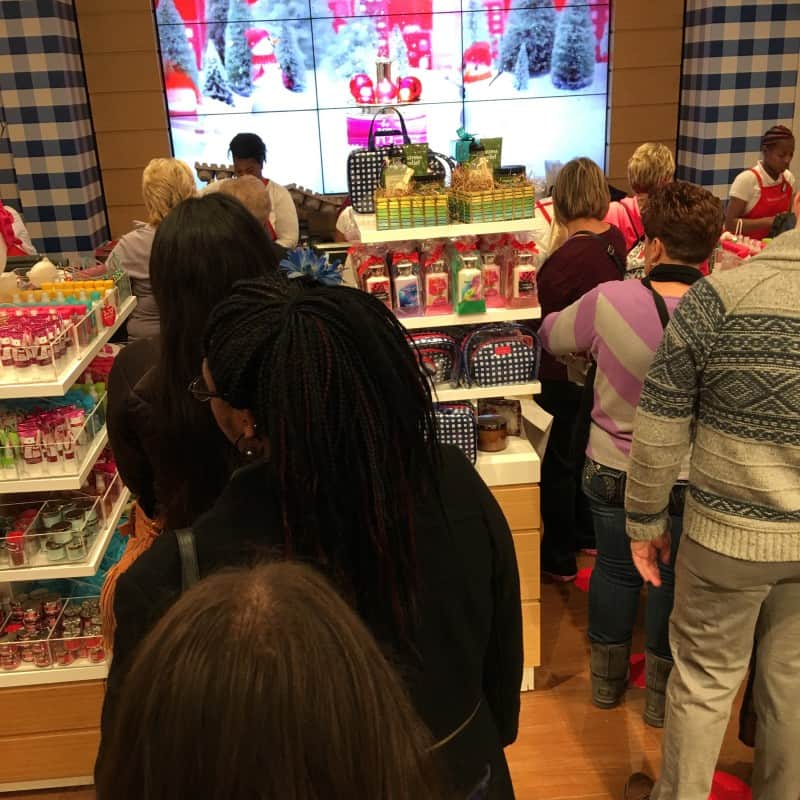 Saturday night I headed out to surprise Neil at the airport and ran into the holiday train. Every holiday season there is different train car fully decked out in Christmas lights along with a snow machine and Santa on each different day. This train was the last one of the night and I think Santa was getting tired. 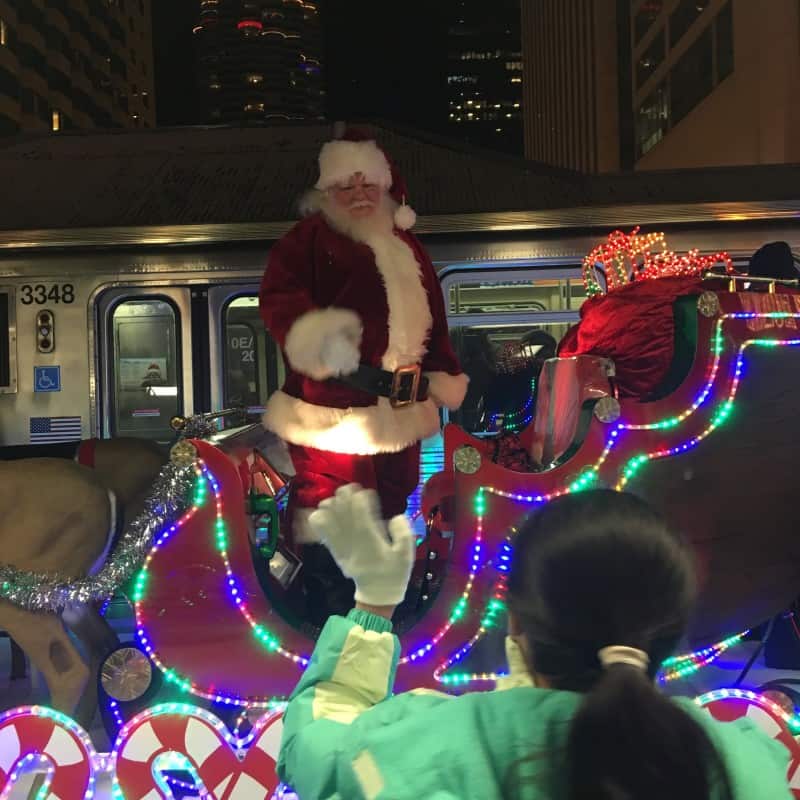 Sunday I trained two clients in the morning, then headed out for my weekly trip to Dimo’s. To be fair, this time it was for a legitimate reason. They recently changed the recipe for their mac ‘n cheese pizza and I had to taste test. They expanded their variety of cheeses and added some green onions. It was still one of the best pizzas I’ve ever had, but I’m not sure how I feel about the onions. Maybe it’ll just take some getting used to. That or I can just pick them off. 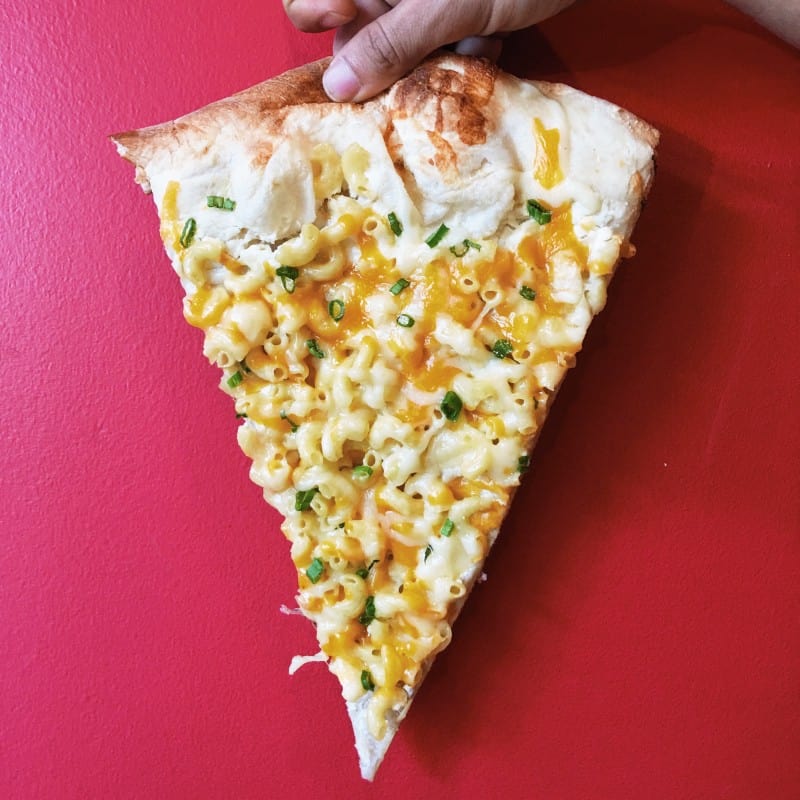 I went on the pizza adventure with Neil and our friend Matt and while I inhaled two pieces of delicious pizza, they only grabbed one a piece so that they could save room for a burger later on. We went to Umami Burger which was good, but not the best. Trying their regular burger may allow for a better review. 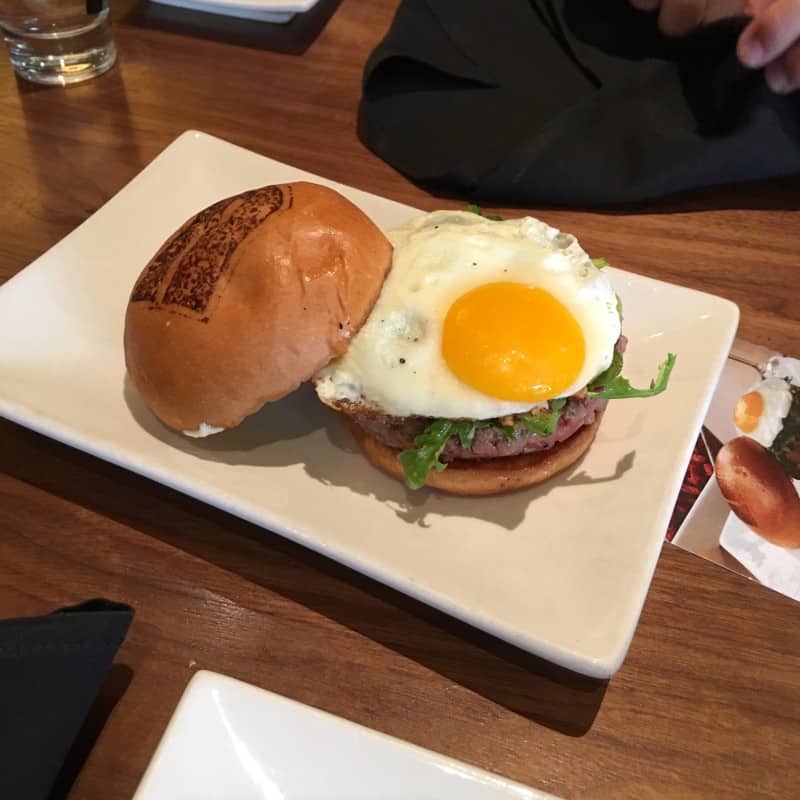 We also made a stop in Mindy’s Hot Chocolate to sample one of their delicious varieties. Neil and I ended up splitting a half and half which is half espresso and half dark chocolate. Each cup also comes with two homemade marshmallows which were amazing.

Here is my warning for this place—split one of these with two, maybe three people. It was the richest drink I had ever had and was literally like they had melted a chocolate bar in a cup. Delicious yes, but definitely not manageable by myself. Mindy’s also carries a whole menu of breakfast, brunch, and dinner options in case you want to head in for a whole meal. 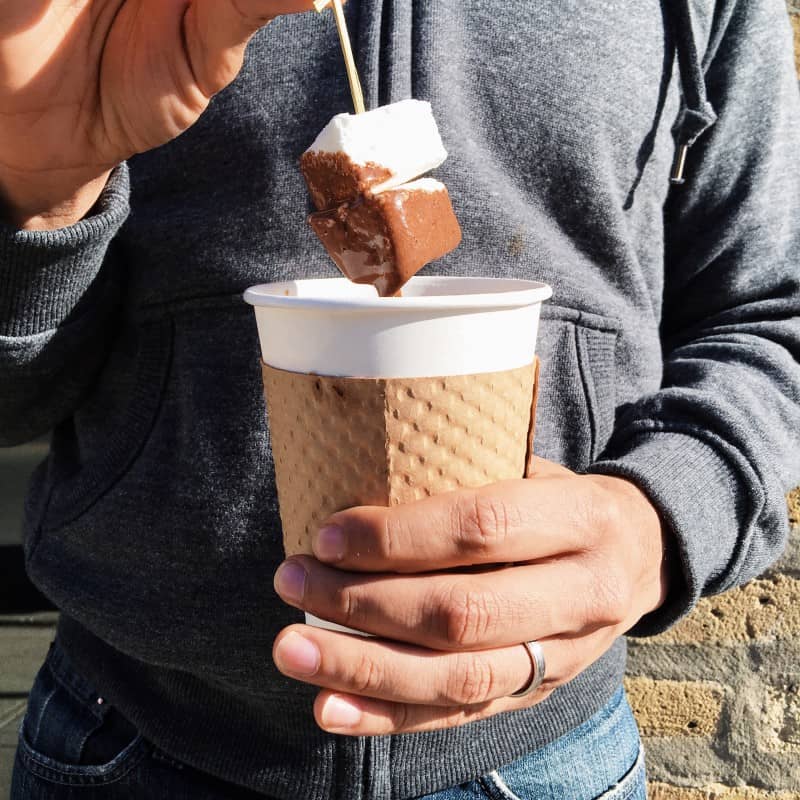 We headed back and crashed from all the sugar while watching football and The Wire. For dinner we went to Eataly to grab fresh pasta and ravioli, steak, and monkfish, but ate everything before I was able to take a decent picture.

I also finalized plans for my blogging conferences next year and have all my registrations complete. I am PUMPED because I am going to both Fitbloggin‘ and Blogfest next year! They are only a week apart, but I can never get enough of my blog friends and new information. I’m especially excited to head back to Fitbloggin’ since I wasn’t able to attend last year. Hopefully I will see some of you there!

For those of you who entered the Swanson gift card giveaway, congrats to the winner–Sarah N!

9 comments on “Weekend of Warmth and Workouts”