I’ve had this post idea sitting in my drafts since July, but never got around to writing it. At that time I was following a girl on Instagram who admittedly suffered with an eating disorder for many years of her life, but was apparently doing better. She never posted pictures of herself on her stories until one day she did and the image took my breath away. What I saw was not someone who was “doing better,” in fact, all I could concentrate on was the fact that I could count the number of visible bones she had because she was so thin.

I’m not sure what made me fixate so much on this girl — whether it was the fact that I could empathize with an obviously broken person or the fact that she didn’t see a problem — but I became obsessively concerned with her well being, wanting to help her, and REALLY wanting her not to die.

I suppose this is how it feels on the other side of these types of things (addiction, eating disorders, etc.) — unable to help someone unless they want to help themselves. Knowing that there’s a better way, but only if they’re able to see it. Understanding that you can scream and insist on things as much as you want, but that you have absolutely no control over another person.

I struggled with whether it was my place to say anything. I had only talked with her over DM a handful of times and we certainly didn’t have a close relationship where this type of conversation would be entirely appropriate. I went back and forth and also brought it up with my therapist because I often need a rational, third-party opinion. In the end, I never said anything, which still bothered me, and had to unfollow her on Instagram because it was not my responsibility and was taking up a lot of my mental energy. It may sound harsh, but we basically had no relationship and it wasn’t my job to fix her. Right before I did that I saw that she entered a treatment program.

That being said, there ARE appropriate times to reach out to loved ones, friends, coworkers, etc. if you suspect they may have a problem. There are varying levels of what’s appropriate based on your relationship with that person, and I wanted to share some tips of how to approach the situation in case you ever find yourself there. 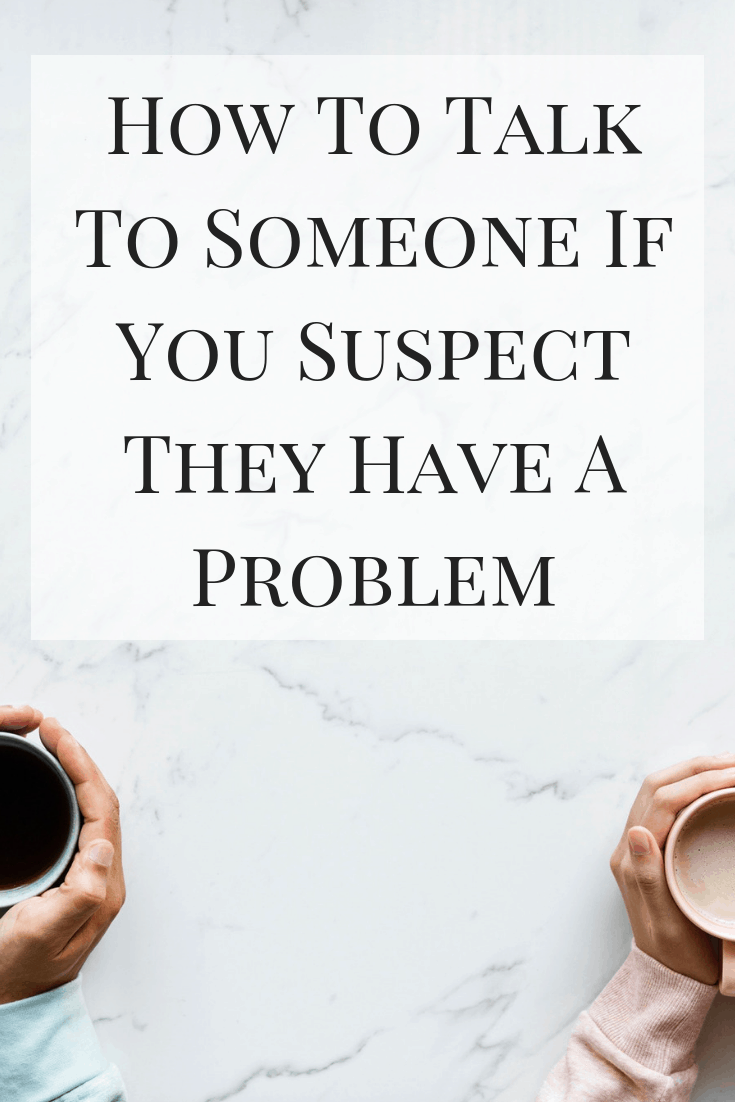 First of all, make sure to talk to the person one on one. Confronting them in a group (unless you’re working with trained professionals in the form of an intervention) can go horribly wrong and will almost undoubtedly result in defensiveness. Make sure they are free of any substances and operating with a clear head. This will make them more receptive to what you have to say and more likely to remember it.

Express your concern by letting them know you care about them, but that you’ve noticed that their behavior has been off. “I want you know that I’m concerned about how you’ve been acting recently. It doesn’t seem like you.”

Make sure to use “I” statements that reflect how their behavior makes you feel rather than scolding them with statements like “you are really ruining your life.” Instead, phrase it as “I’m worried that you may be making decisions that might have a negative impact on your life.”

Talk about how you feel, but be open and receptive to whatever the other person may have to say. Listen. Some people may be receptive and have been waiting to get help without knowing how to bring it up. They may be thankful for you taking notice and bringing it up with them. Obviously this is an idea situation. Those who are not ready to make changes will likely respond defensively or not at all.

I had a handful of people try and talk to me when I was battling my own addiction. I was unwilling to change my behavior, so I went on the defensive and cut most people out, but I still remember every one of those conversations. This isn’t to dissuade you from trying, but to let you know that you are still heard even if change doesn’t happen immediately (if at all). If the other person doesn’t want your help or doesn’t acknowledge the problem, just reaffirm to them that you are there no matter what if they change their mind. It’s important for people suffering through these things to know that if they time comes when they’re ready to change, they’re not alone.

Here are some of the top things to remember when talking with someone who may have a problem:

It’s hard to know when it is and isn’t your place to say something to someone. I’ve started to follow this rule: if it’s someone that I have an actual relationship with, then I think it’s appropriate. It can get blurry with so many internet connections to know what constitutes an actual relationship (do we have to have met or talked on the phone?), but I can tell you pretty confidently who I would feel comfortable bringing up a conversation with based on the frequency and subject matter of our messages (even if we’ve never met).

Still, the main people that I would reach out to are those who I frequently interact with in person: mostly friends and family. Think about your relationship with a person and if it’s appropriate for you to bring it up. It’s ultimately your decision, but make sure to make that decision wisely.

(Obviously I’m well versed in this arena, so if you ever have any questions, don’t hesitate to reach out!)