A Long Weekend in Arizona - Erin's Inside Job Skip to content

A Long Weekend in Arizona

I’m still in Arizona until tonight, but I know that today won’t consist of much more than lying by the pool, eating, and then heading to the airport, so we’re probably good to recap the last couple days here.

This is how I spent my mornings. Tea and cool air. 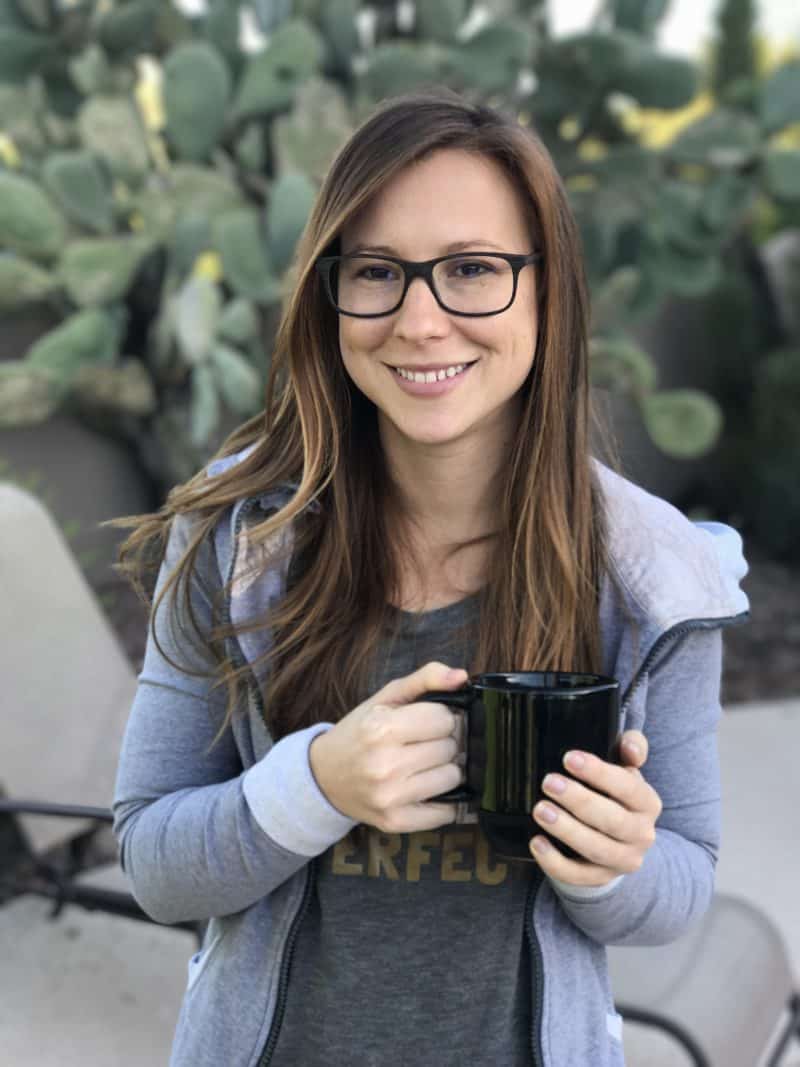 We planned this trip to Arizona as a way for everyone to get together to celebrate Neil’s parent’s 50th wedding anniversary. It was Neil and I, his parents, and Neil’s brother’s family. None of us had ever been to Arizona and it seemed like the perfect place to go to escape the rain and cold that Chicago has been gracing us with lately. 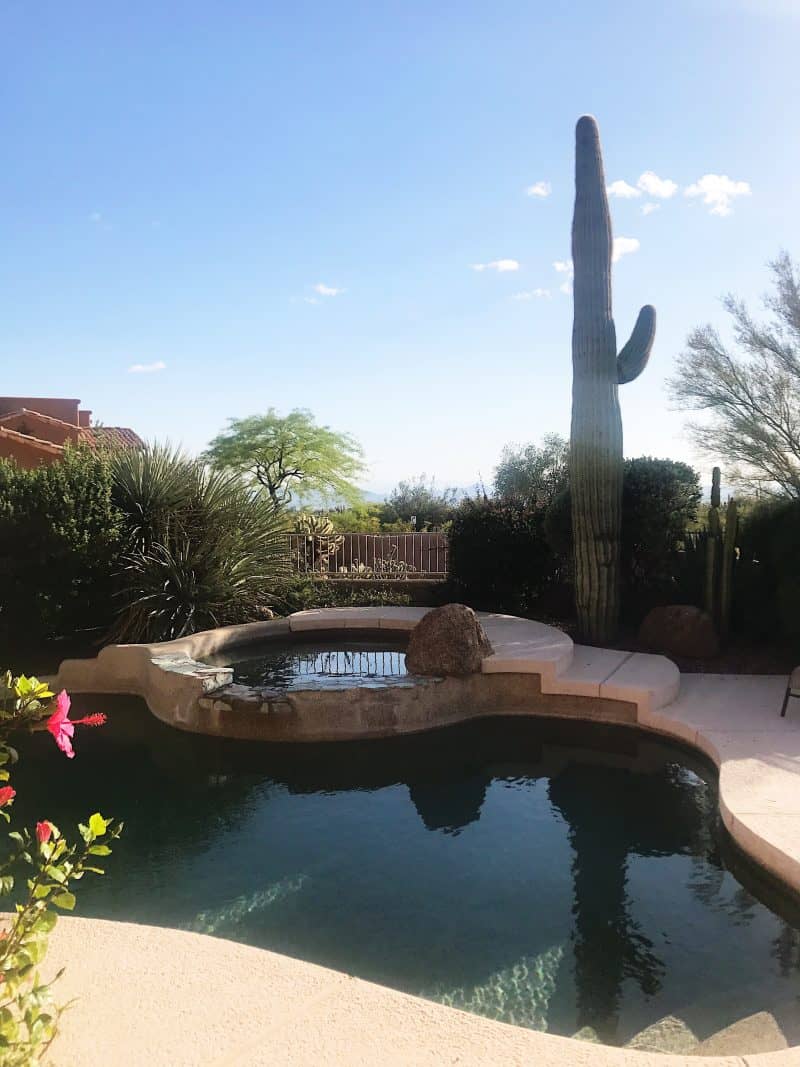 We rented an Airbnb in Scottsdale, which is where we spent a majority of our time. Everyone got in on Saturday, we stocked up on food, and settled in for the next few days. 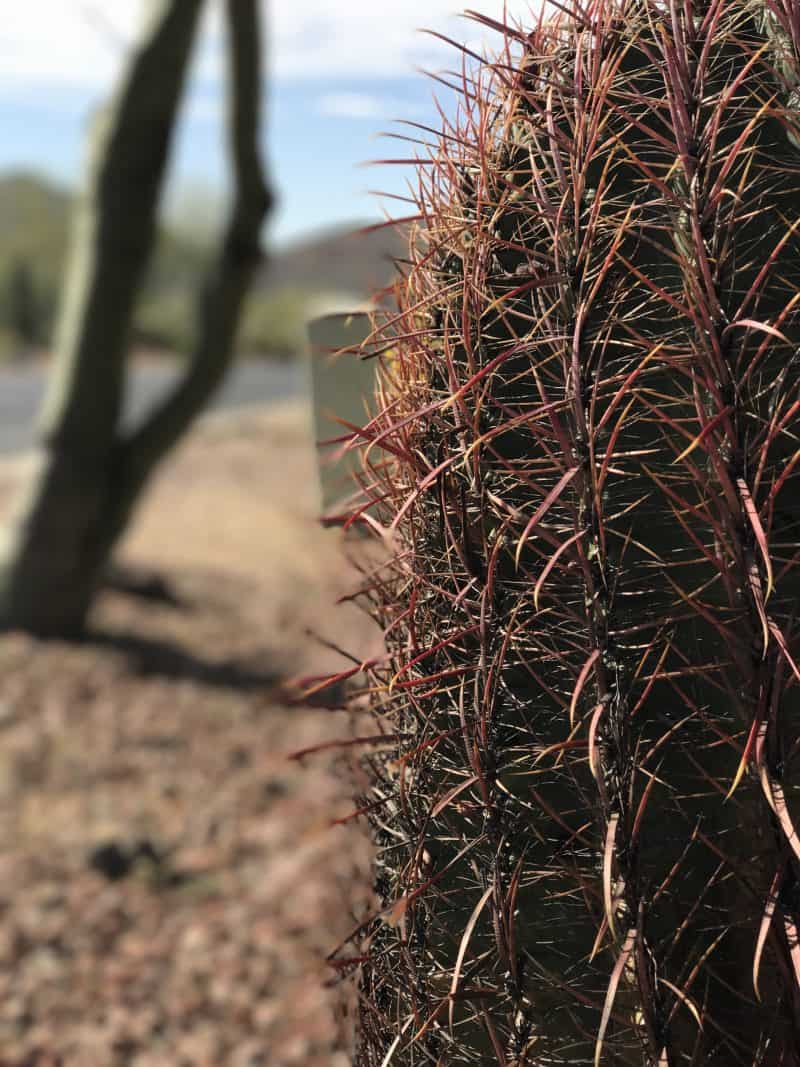 Sunday morning we headed to Pinnacle Peak Park which was only about a mile from where we were staying. Since the whole family was there, we chose a relatively low grade hike that we could finish in about an hour or two. 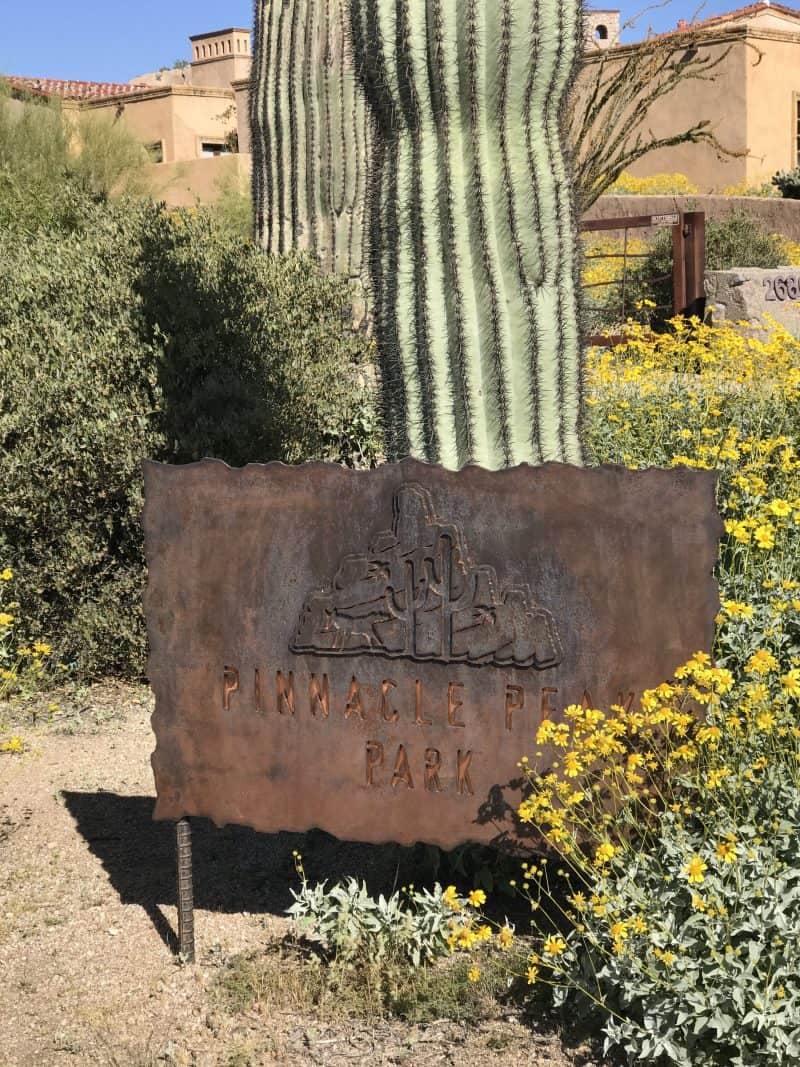 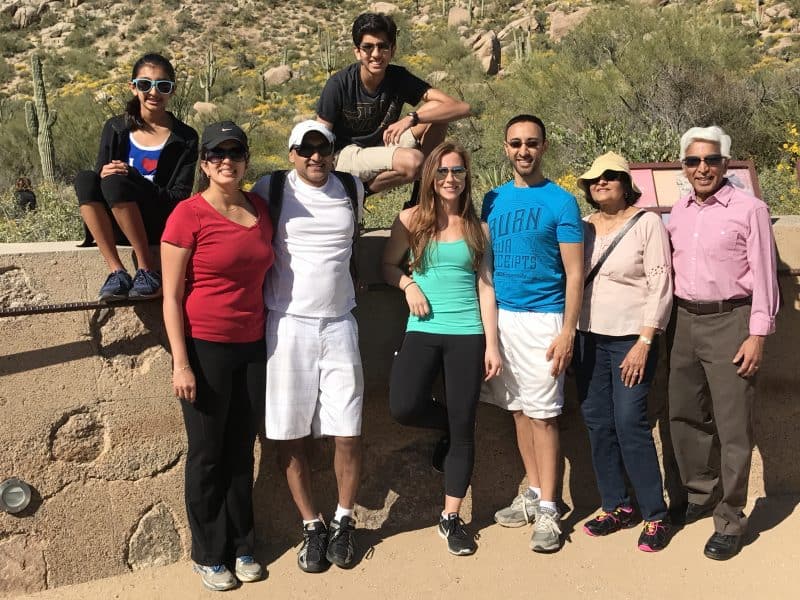 Being in the desert is different from any other place I’ve been. For one, I’ve never been somewhere with no humidity. It’s GLORIOUS. My hair has never looked better (insert laughing emoji). It’s literally so nice.

For another, I haven’t been around so many mountains. The land is flat and expansive until you turn and there’s a giant mountain protruding from the Earth. 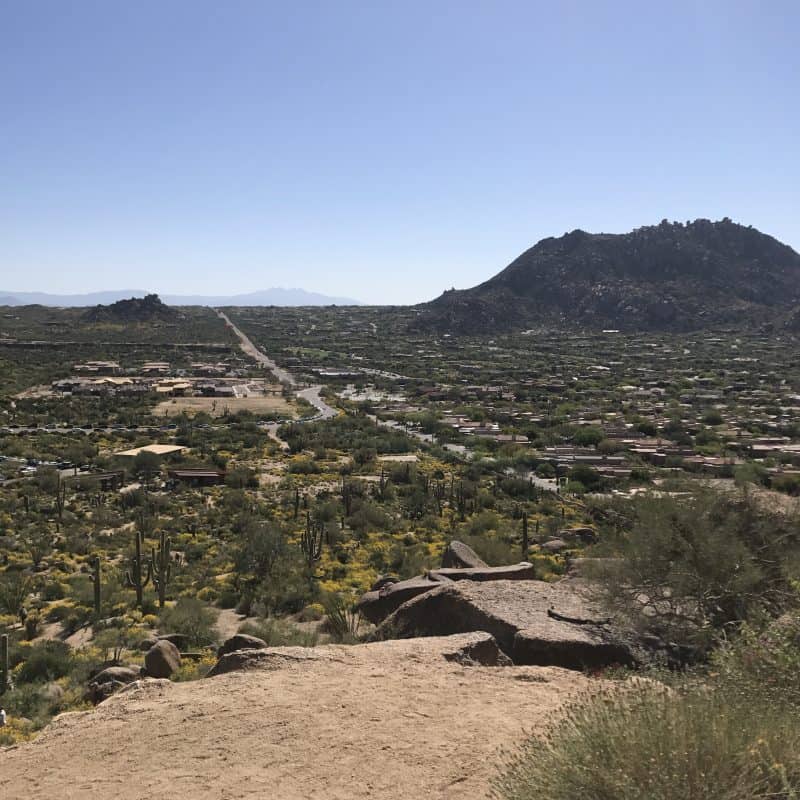 I also love how it’s dry and sunny during the day and cool at night. We opened the windows since cold sleeping is the best. Love it. 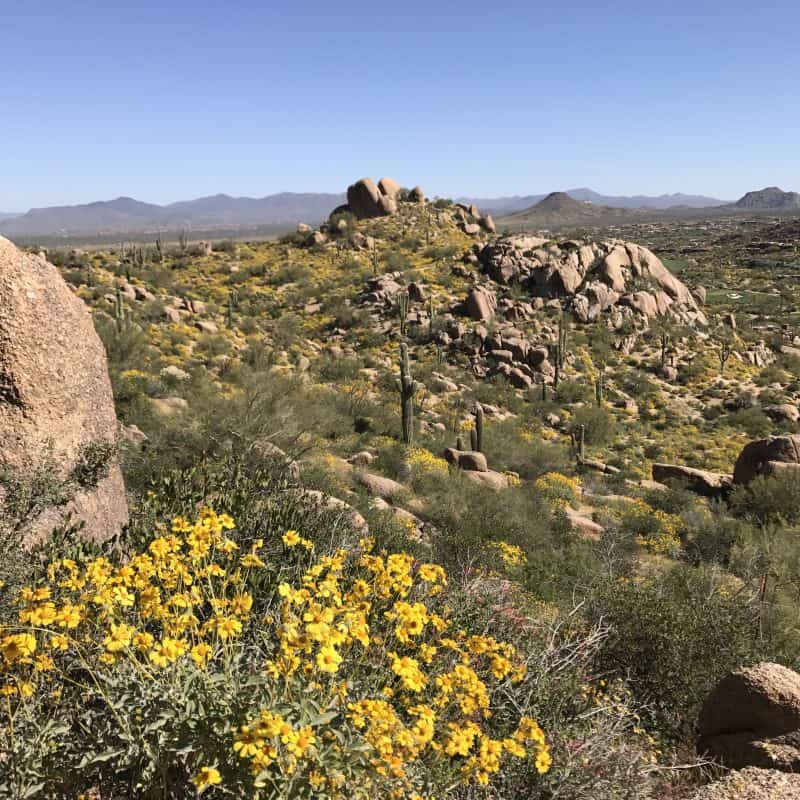 There were a couple points designated for viewing, so of course I decided I wanted to take a handstand picture and look like a cactus. This is life.

You may have seen the final product, but there were also several times we had to wait for the people to thin out. Thankfully Neil kept snapping pictures and captured this great one while we waited. 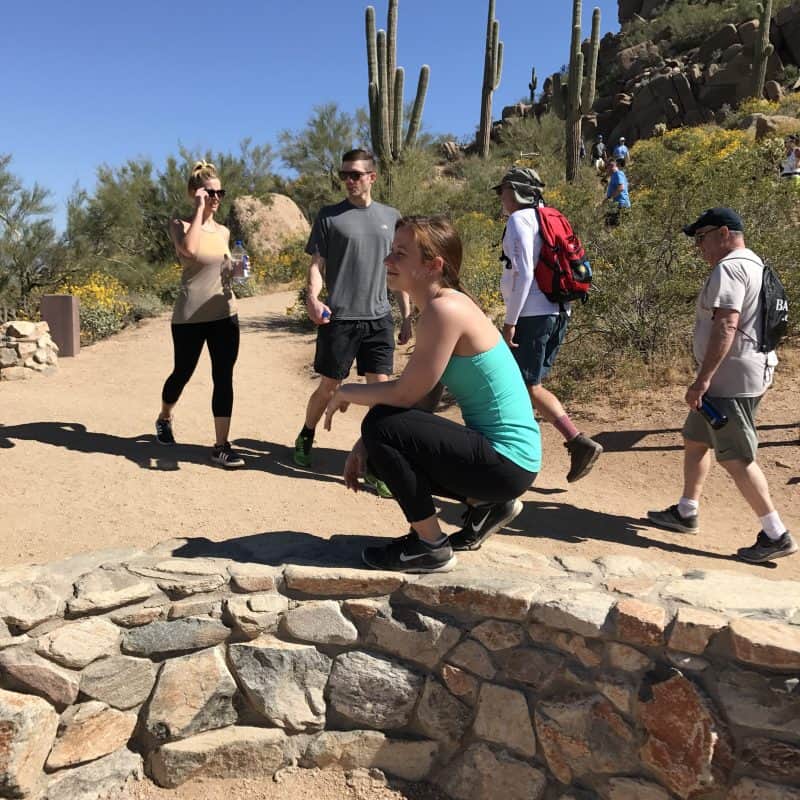 We only hiked for about an hour and a half and then started to make our way to Tempe where they were holding a weekly market and Arts Fest.

On the way I forced a detour to The Local Donut — a place I had found on Yelp that had great reviews and promising donuts. Let me tell you they did not disappoint.

The Local Donut can be easily missed as it blends into a strip mall, but if you’re ever in Scottsdale, definitely make a trip. We all devoured these donuts in minutes. 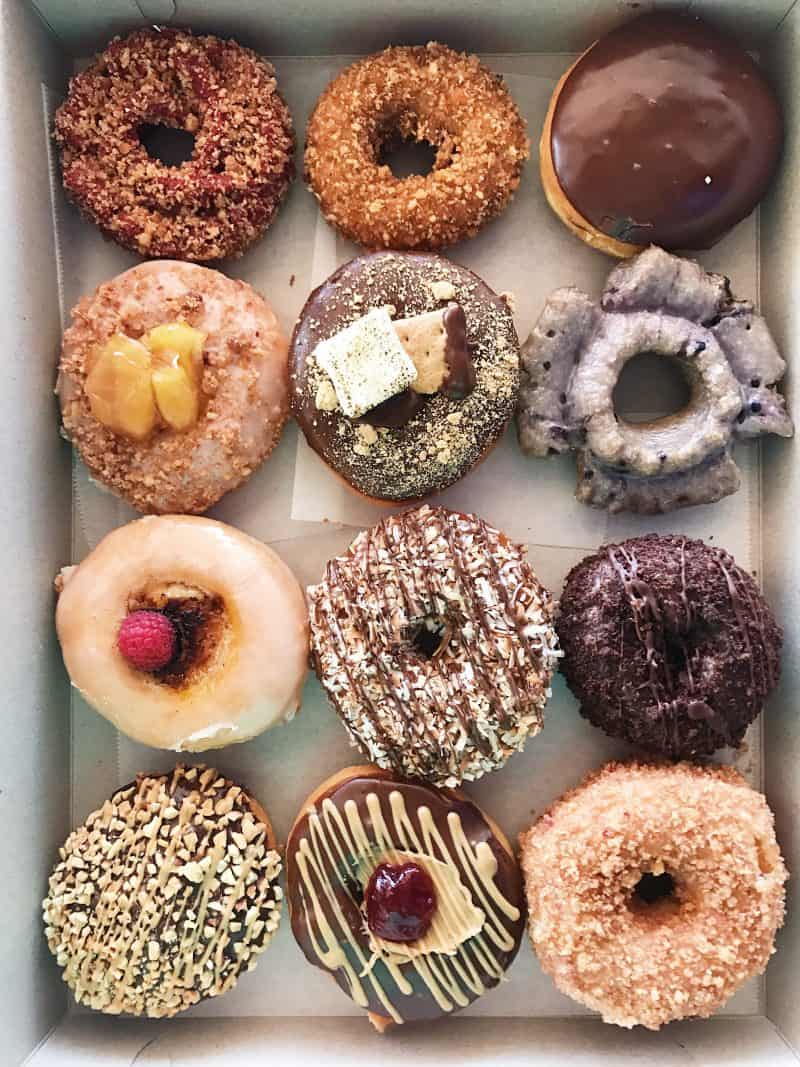 Once we made it to Tempe, we were surprised at how expansive the festival was. It spanned roughly ten blocks and had vendors ranging from food to arts to homemade products. 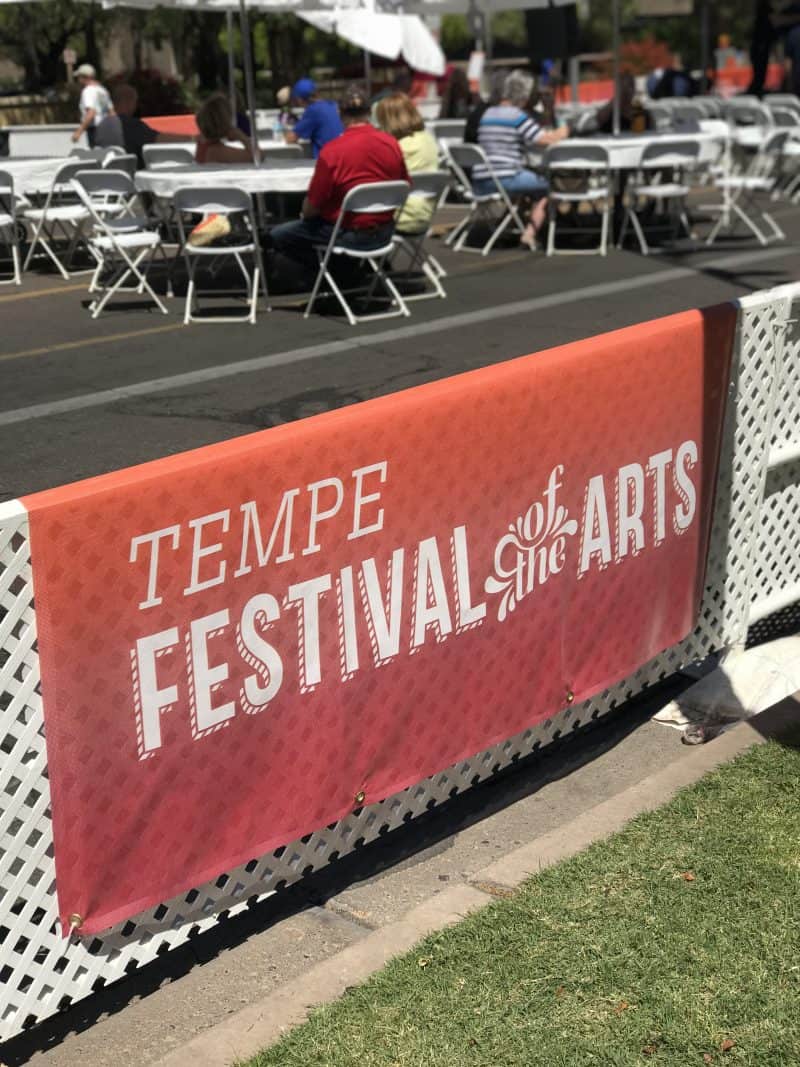 I loved all the cute decor and live music. If we hadn’t been there at the hottest point of the day, I might have stayed and wandered a little bit more. 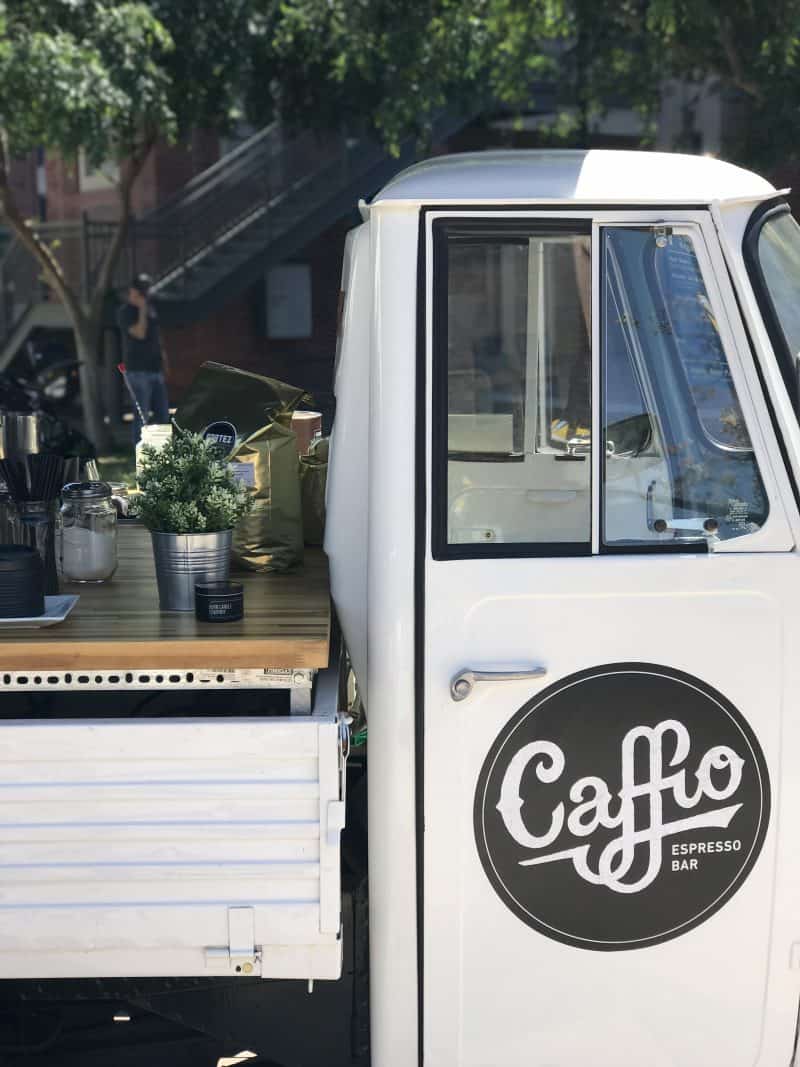 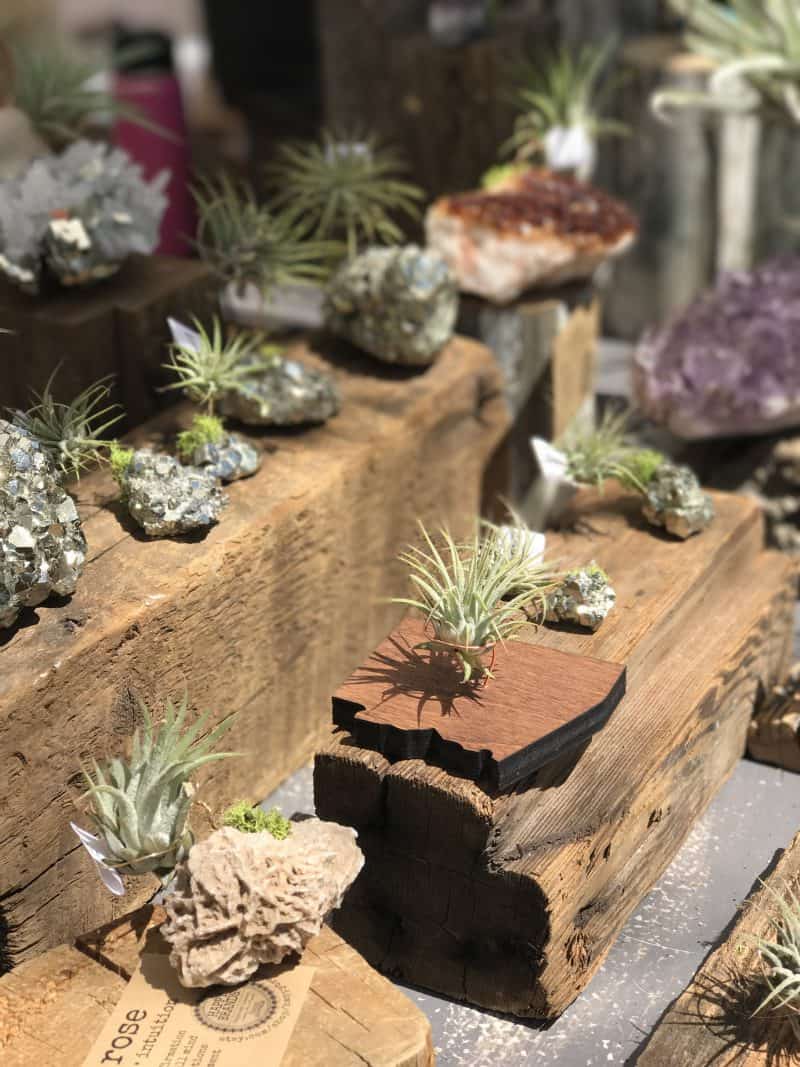 We got back to Scottsdale around three and my friend Megan came over about an hour later. I hadn’t seen her since the NOW Foods event last year, so I’m glad she could make the trip out.

I even put her to work making breakfast for dinner while I pretended to help and shoved bread in my mouth. 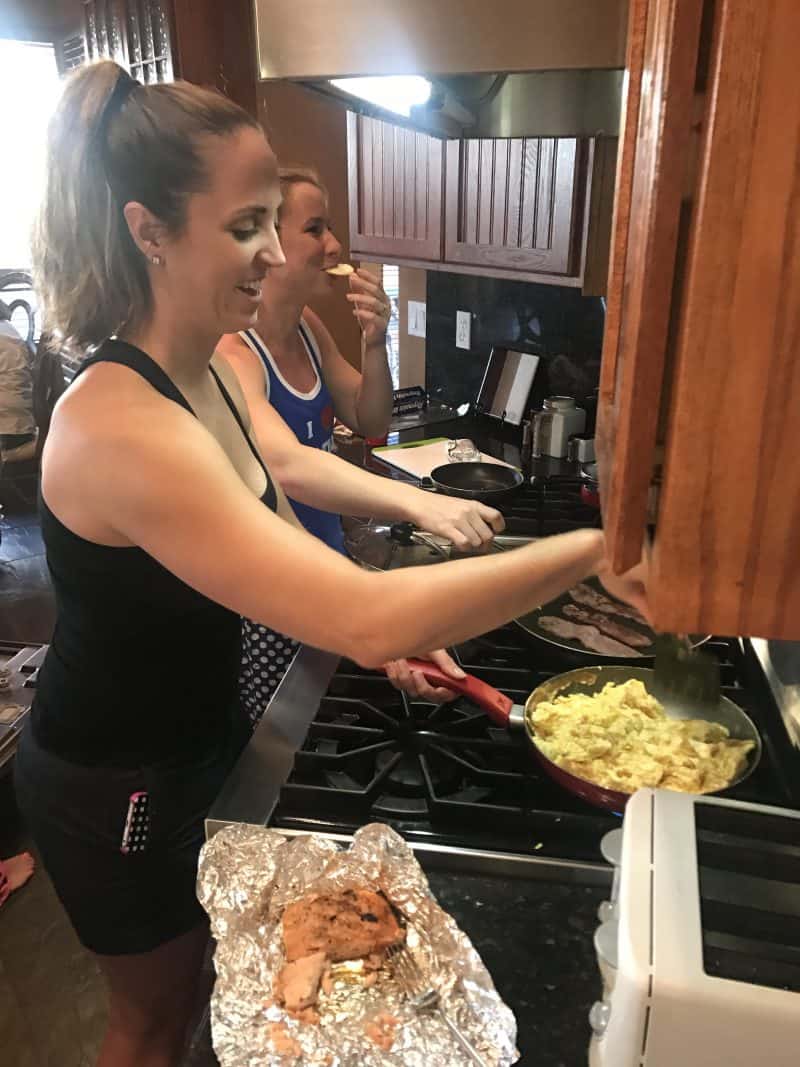 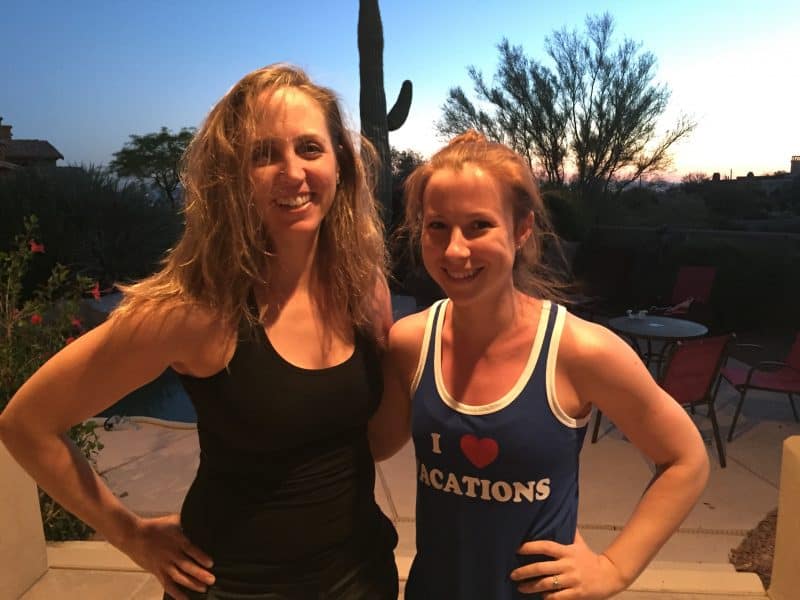 After dinner we sat down and played Texas Hold ‘Em for a couple hours, although I was the first one to lose all my money.

Monday morning was spent mostly at the house. After a quick breakfast, a couple of us snuck out of the house to pick up some surprise cakes from Nothing Bundt Cakes.

Neil and his brother are 20 years apart with birthdays a couple weeks from each other, so since we were all together we wanted to surprise them (and his dad whose birthday is the day before Neil’s).

Let me tell you these cakes are no joke. I don’t think I’ve had as much sugar as I did on this trip in months. I don’t hate it. 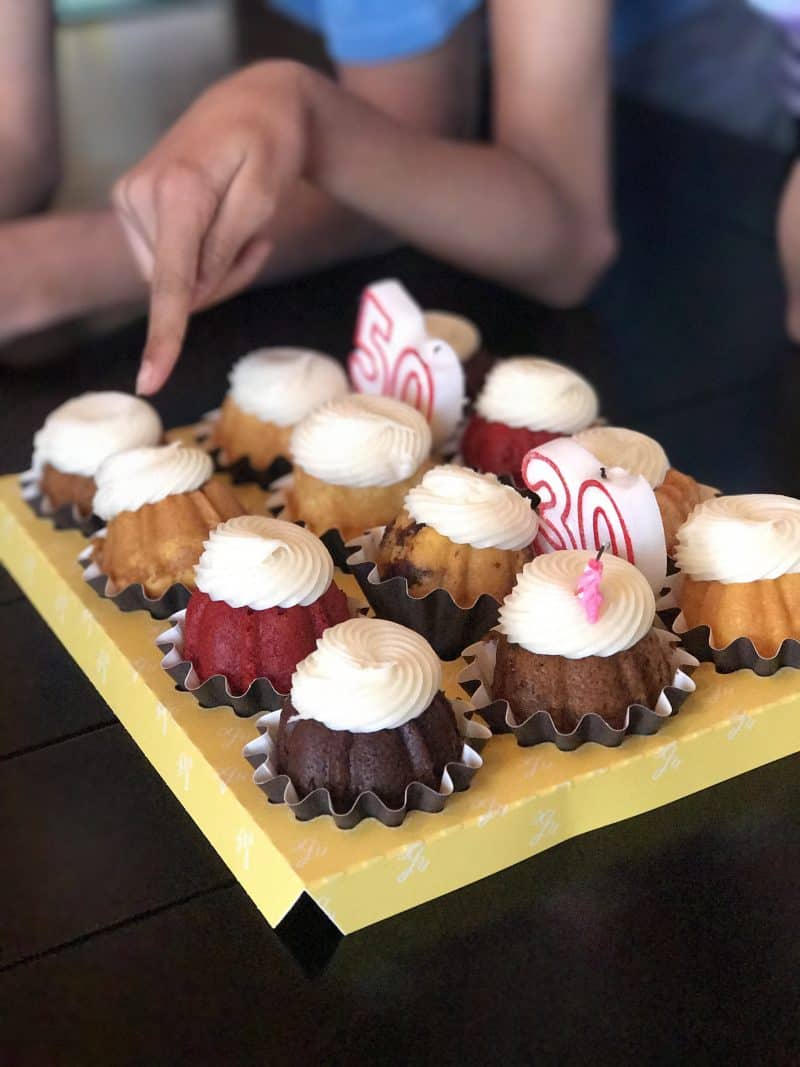 After pool time, lunch, and cake, we drove to a local theater to watch Boss Baby which was pretty funny. Then it was time for pizza.

Nearby was a place called 1000 Degrees where you can make your own pizza and it’s wood fired for two minutes until it’s done. The owner was super nice and accommodating and I had to assure him there was nothing wrong when I put the pizza on the floor to take pictures of it. Maybe that’s not a thing in AZ. 🙂 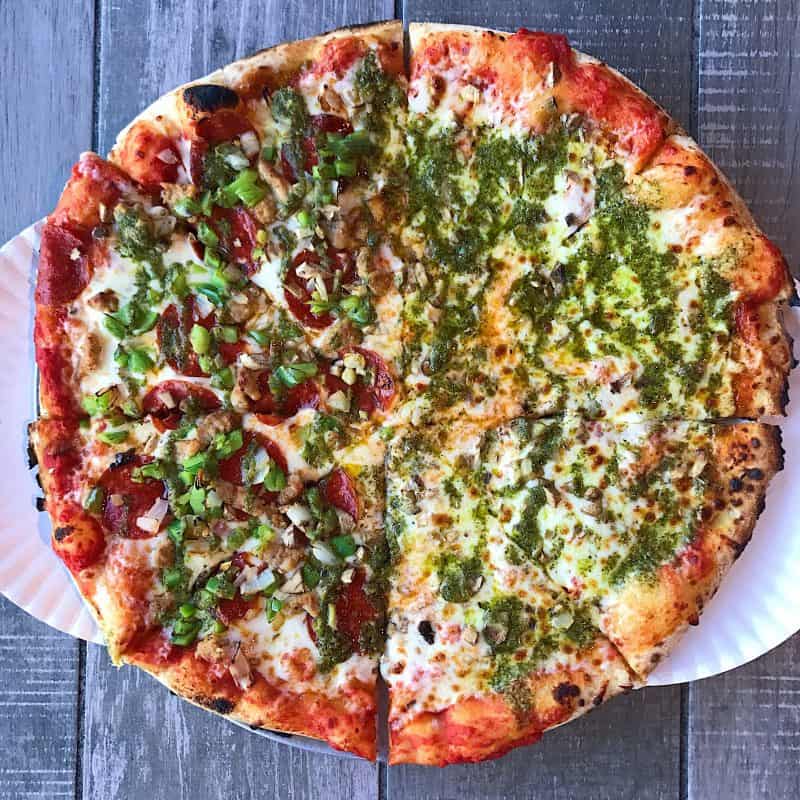 After dinner we had more games at the house and are spending the rest of today packing up, hanging out, and flying back in the evening. They always seem to go so quickly, but I definitely know I love vacations. 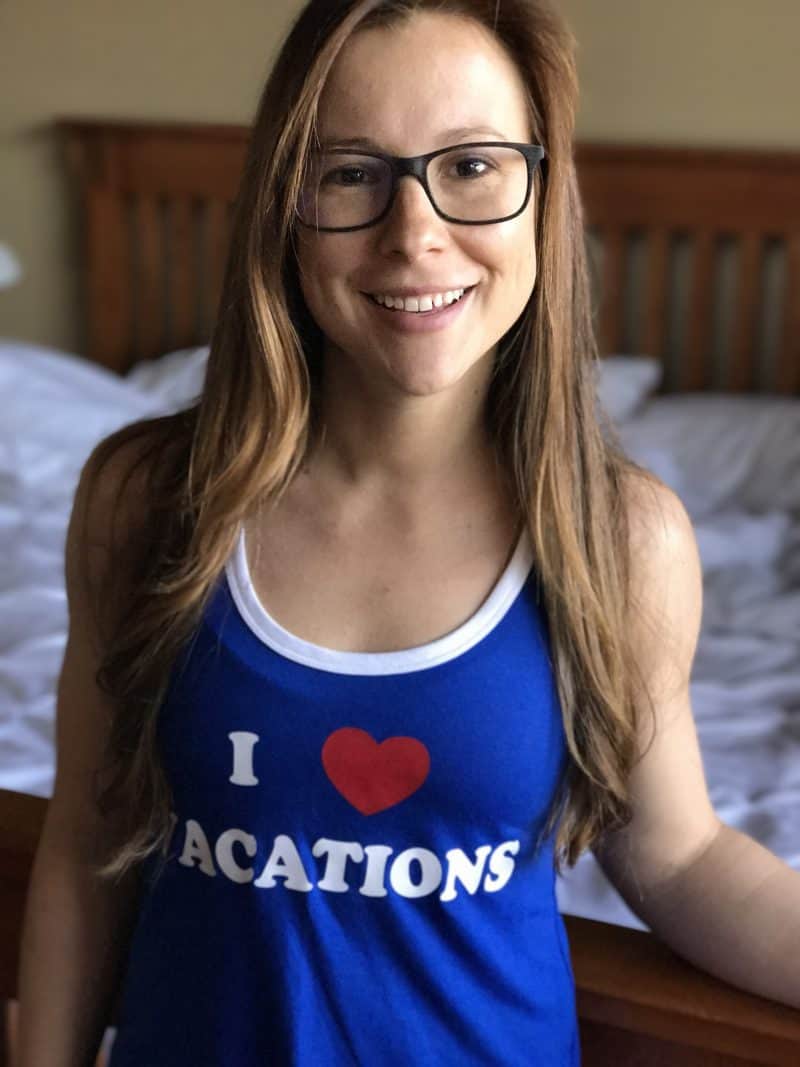 Arizona was absolutely beautiful and the weather was to die for. If you’ve never been, I’d add it to your list. Now if only I could bring the dry air back home with me…

27 comments on “A Long Weekend in Arizona”