Hey guys! Don’t forget about the giveaway that ends on Friday!

I swear, one of these days I will learn. As you know, I ran the Magnificent Mile Women’s Half Marathon on Sunday. I won my entry (thanks Luna Bar!!) and since I am apparently also a glutton for punishment, I decided to run it. I did get a little more running mojo than I did before the Rock ‘N’ Roll half in July, but by the time the race came around I had only run a max of 5 miles.

I was enjoying running again by listing to the running feature on Spotify, but then my shin started to bother me and I decided I would lay off running some and hope for the best (sounds familiar). I continued my workouts at Sweat, but struggled to get any dedicated running in.

The forecast was less than desirable and it was already in the 70s when it was time to head to the start line at 6:15 am. 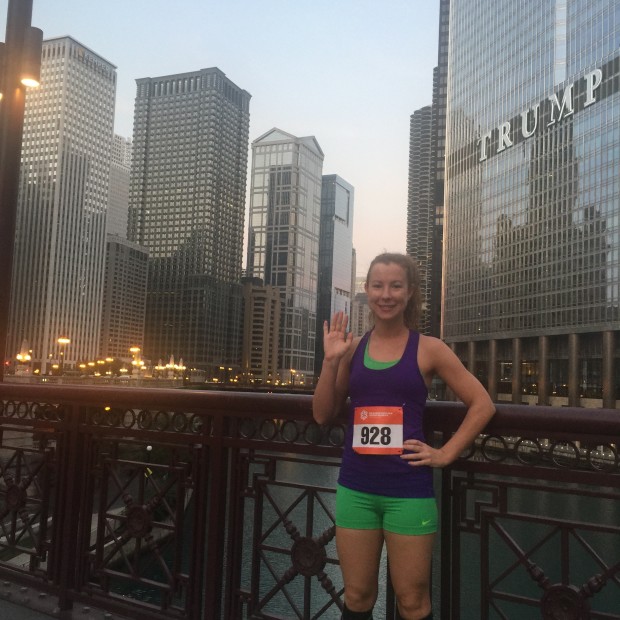 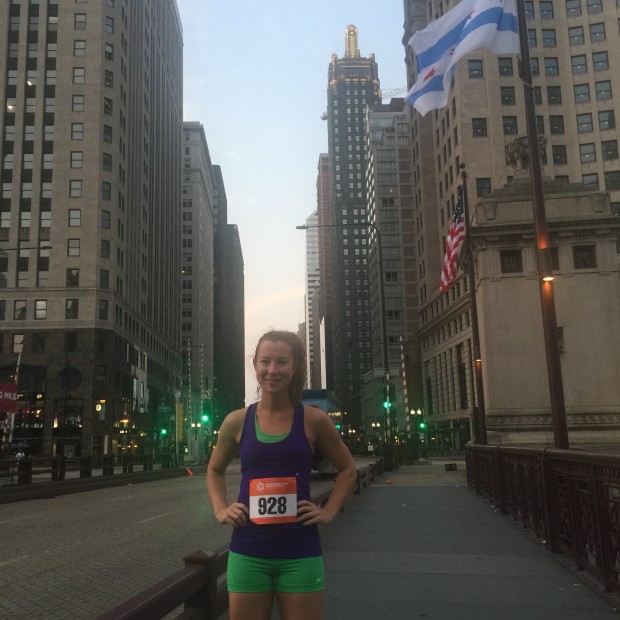 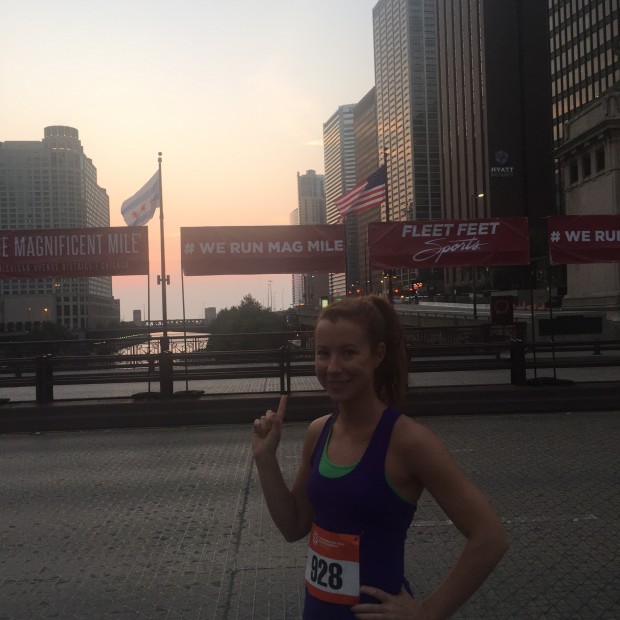 I met up with Susie who was actually the reason I won my entry because without her drawing my attention to it, I never would have entered. So it’s kind of her fault, but she gave me a crown to wear so that made up for it. 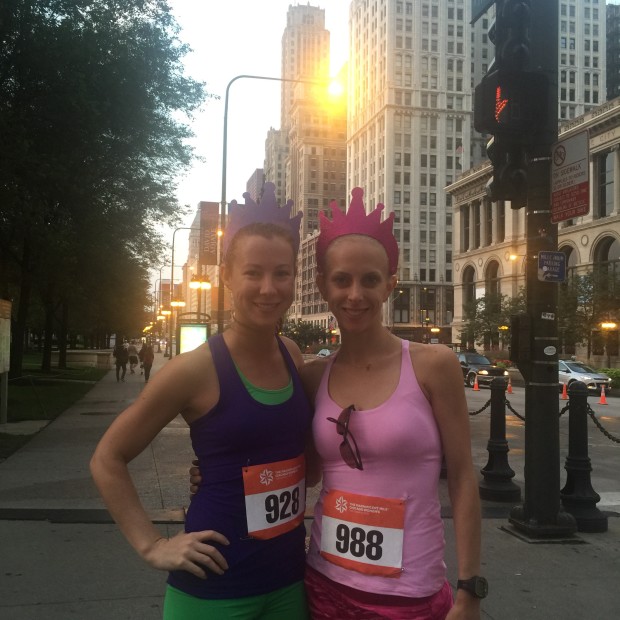 The race started out by Buckingham Fountain. I should have known by this ominous sun picture that I was doomed. 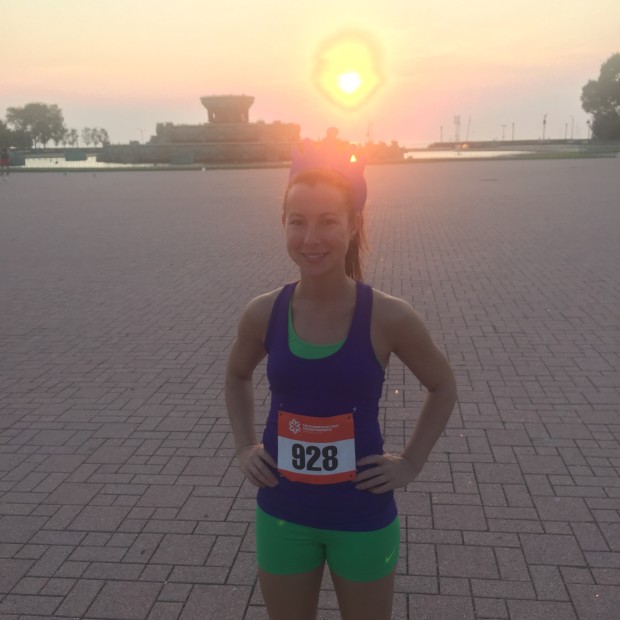 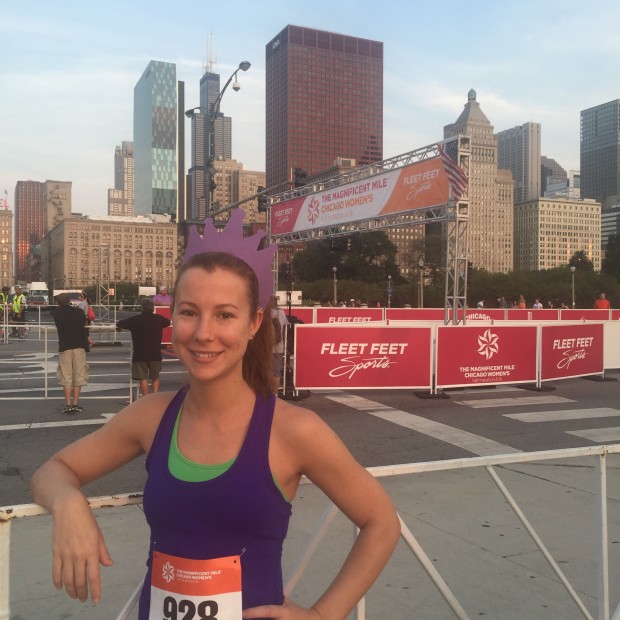 I took a parting picture with Neil in case the race won and I never saw him again. 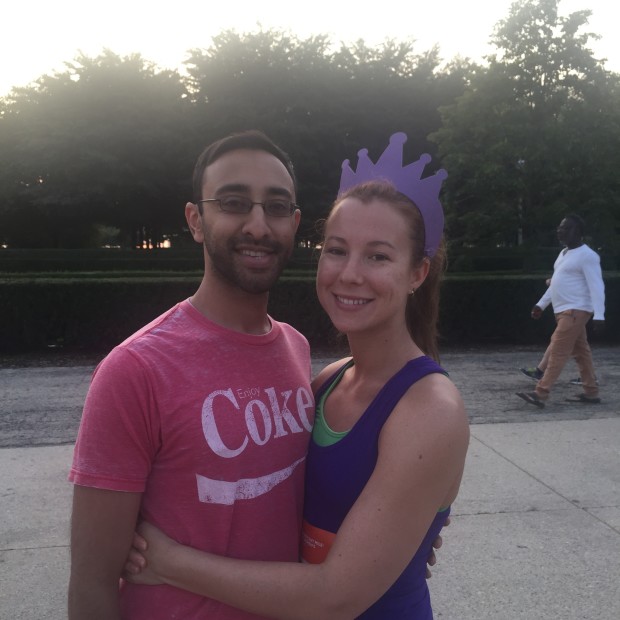 I have no pictures from the actual course because I had trouble getting my phone out of my belt. Here is the course: 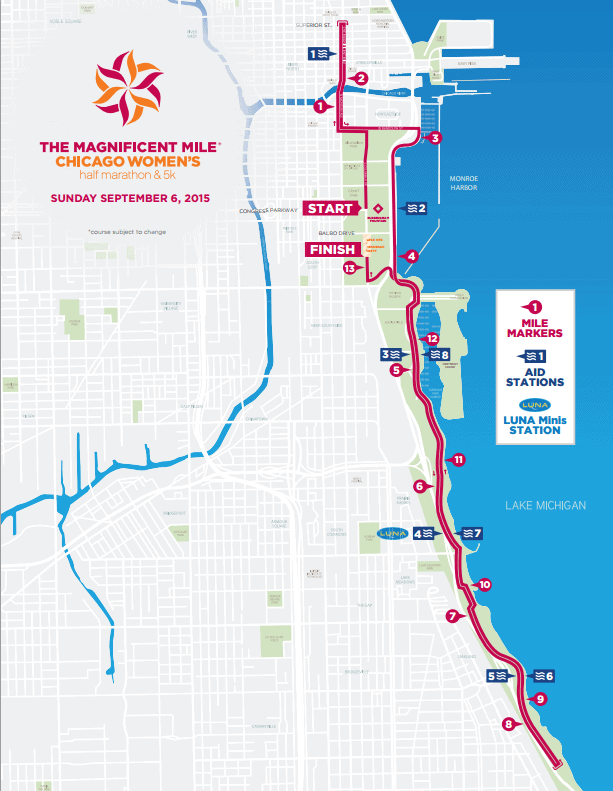 I knew from the start that this was not going to be a good race. Even though I had a friend to talk to which always helps to pass the time, I felt off even 5 minutes into the run. Susie asked if I wanted to switch to the 5K instead which I actually considered but knew I wouldn’t do. The fact that I considered it though made me nervous.

We were only about 3-4 miles in when we (I) decided to try out the walk/run method. We ran for 4 minutes and then walked for 2. We kept pace with the 2:10 pace group, but after my two bathroom stops we ended up hovering around the 2:20 group. At this point, as long as I beat my time from July I was happy.

I was glad Susie took one for the team and hung out with me as I cursed myself for doing these crazy things. Towards the end of the race, they started handing out ice cold towels which were the most amazing things I have ever felt. They even smelled like hose water which sounds gross, but they were cold and smelled like my childhood. At one point I wanted ice water so badly that I told Susie I wanted to eat my towel. I may have been delirious.

We FINALLY finished after I spent some time defiantly walking up a hill at the end. Susie was great about wearing her marathon coaching hat as she talked me through the insanity, but I am also stubborn and was trying to avoid death.

I finished in 2:29:40 which was about 9 minutes faster than July. It was about 20 MINUTES slower than my time in May, but I think that’s to be expected. I may have assaulted people to grab an ice cold can of water and then chugged it down like it was the first time I had ever had water in my life. It was AMAZING. Then I snagged some Luna protein bars and another ice cold towel. I’m telling you, those towels were the most amazing things I have ever felt.

I hobbled home and followed Susie’s advice by putting my legs up against my bookcase for awhile. It was helpful, but I also just enjoyed lying on the floor. 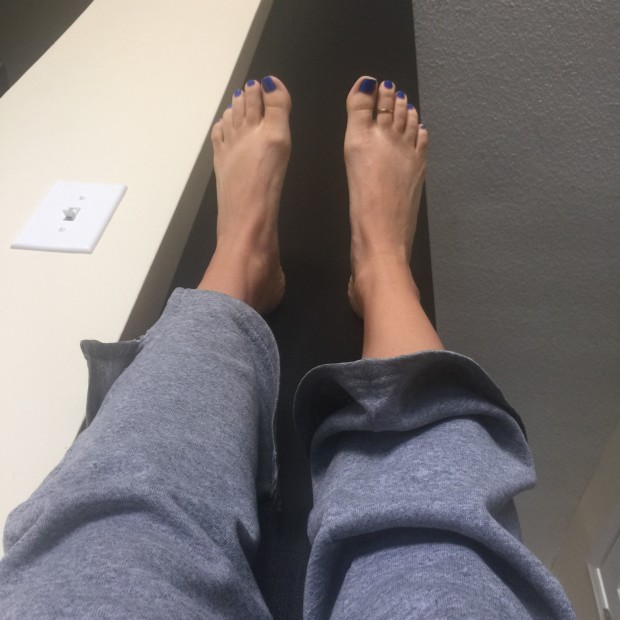 If anything, I thought a lot about how I had plenty of great material to write about for training vs. not training for races. Unless I win another entry this year, I’m not going to voluntarily sign up for any more races, although that doesn’t mean I won’t ever do one again. I think for right now I need to pick up heavy weights and play around with sprints instead of distance.

Again, big thanks to Luna for the entry and for my legs for not collapsing on me!