Weekend in Austin - Erin's Inside Job Skip to content

I know we’re already halfway through the week, but after getting back on Monday night and into the swing of things, I finally have my Austin recap for you.

To start, let’s talk about this adorable tiny house we rented on Airbnb. It’s a 250 sq foot house in the backyard of a super friendly family (with a dog!). 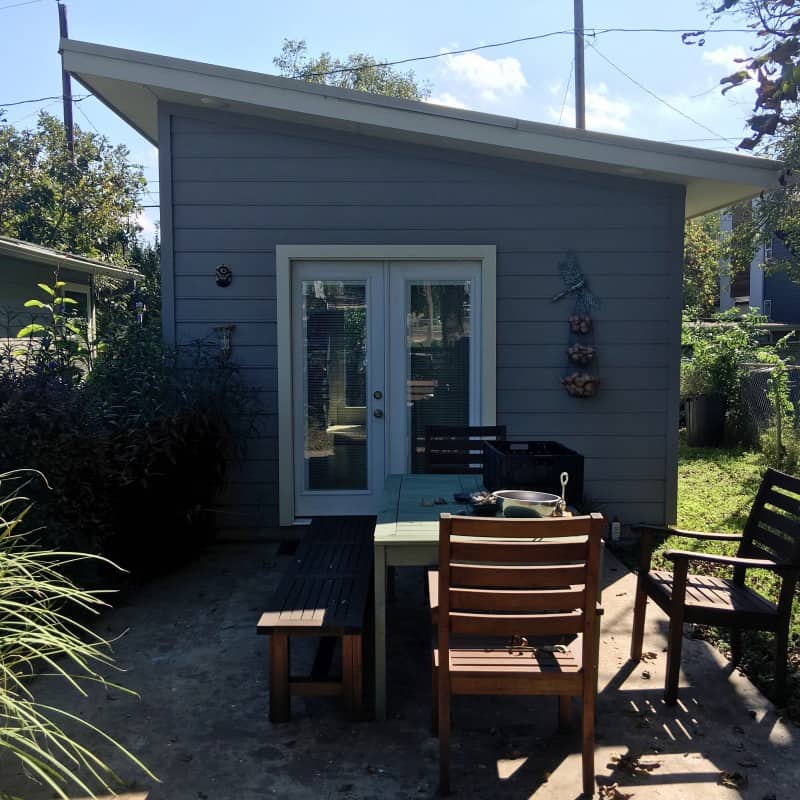 It was cheaper than a hotel room and so cute. They had thought of everything — there were spices, coffee, tea, etc. There was a fully operational kitchen and even a washing machine in case I spilled BBQ sauce all over my clothes (thankfully I didn’t). 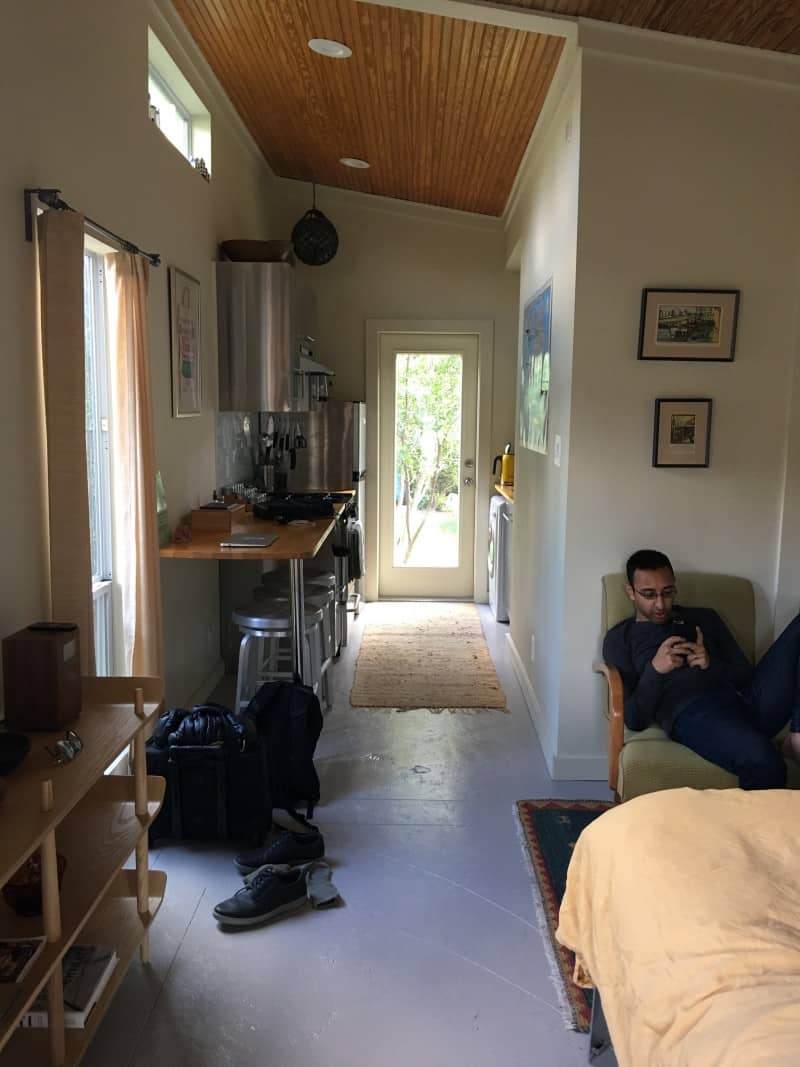 I loved everything about this little house. Everything we needed was there, including high-speed internet for the times when I get sucked into my phone. 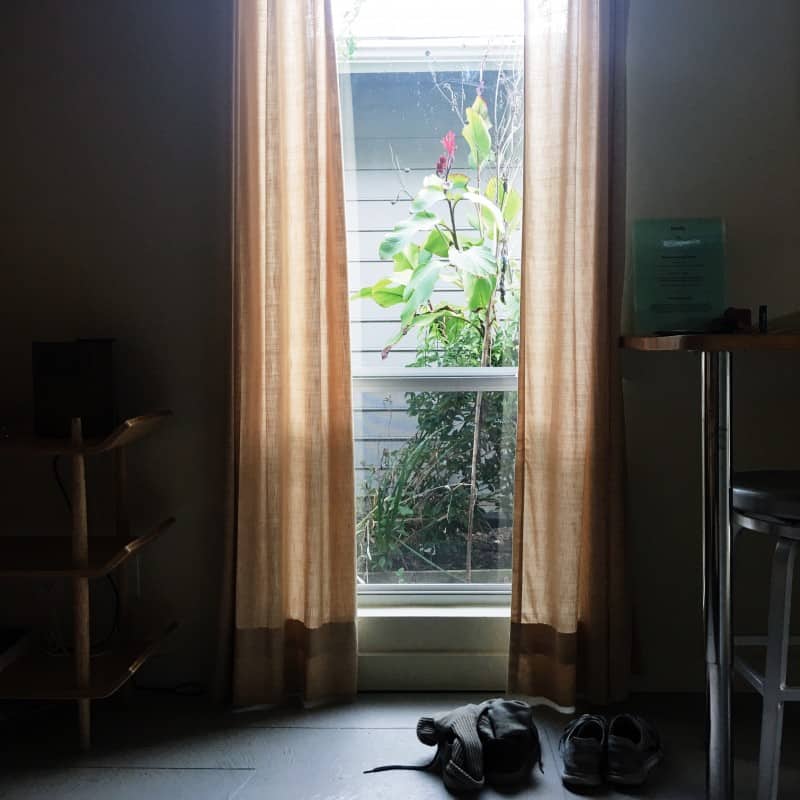 There was enough privacy from the curtains and also these amazing plants that lined the outside. 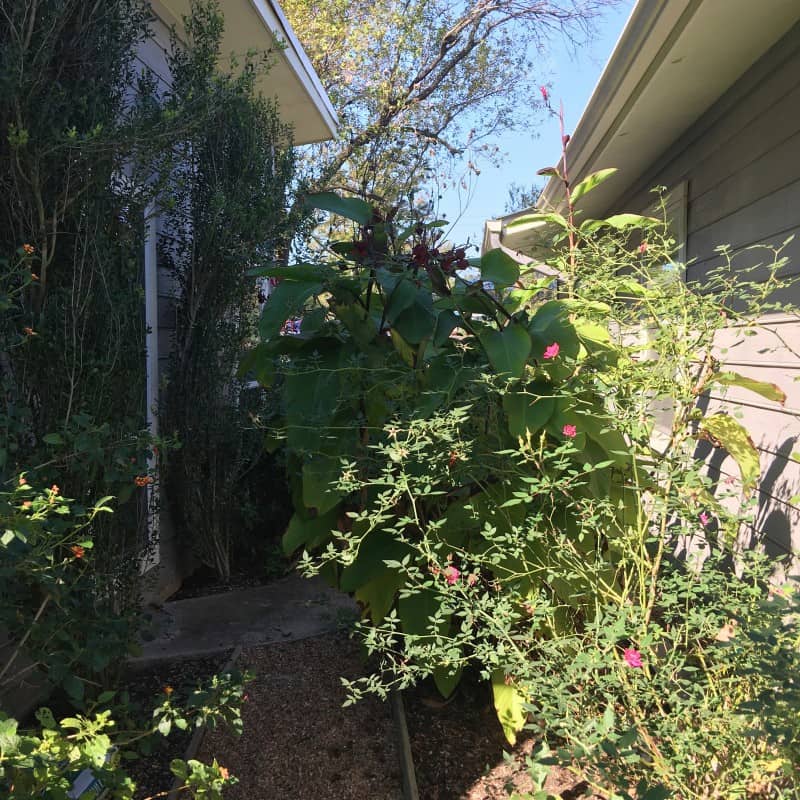 That was our home for three days and two nights. When we first arrived, it was a little early to check in, so we headed to the flagship Whole Foods and grabbed lunch. After lunch came DESSERT and we made our way to Cow Tipping Creamery, one of the many places on my list.

I got this vanilla and sweet potato pie swirled ice cream topped with brownie and cookie dough bits, crushed cookies, and hot fudge. Thankfully they had kiddie sizes so I didn’t fill up immediately on ice cream. 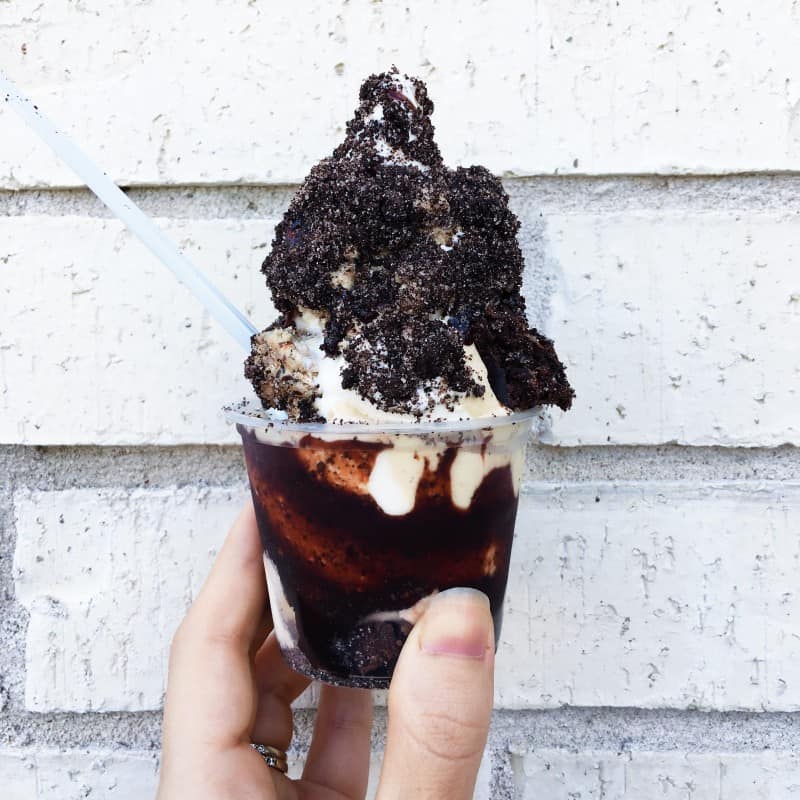 Right next door was a cute coffee shop where we spent some time enjoying each other’s company and the amazing weather. I am so used to humidity wherever I go that to experience dry heat was miraculous. It stayed in the 70s while we were there which made it even better. 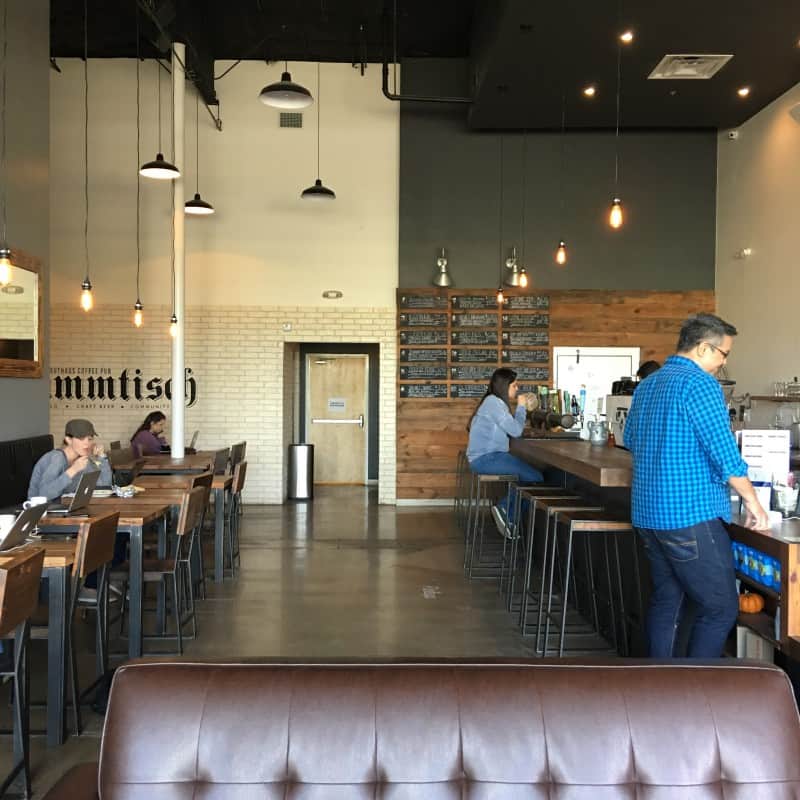 After coffee, we checked into our house and took a nap before meeting one of Neil’s college friends for dinner at Torchy’s Tacos. I wish I had gotten a picture in the daylight so I could show you how beautiful they were. Torchy’s is a chain and you can find them in many places around Austin. The portions are huge and they taste great! 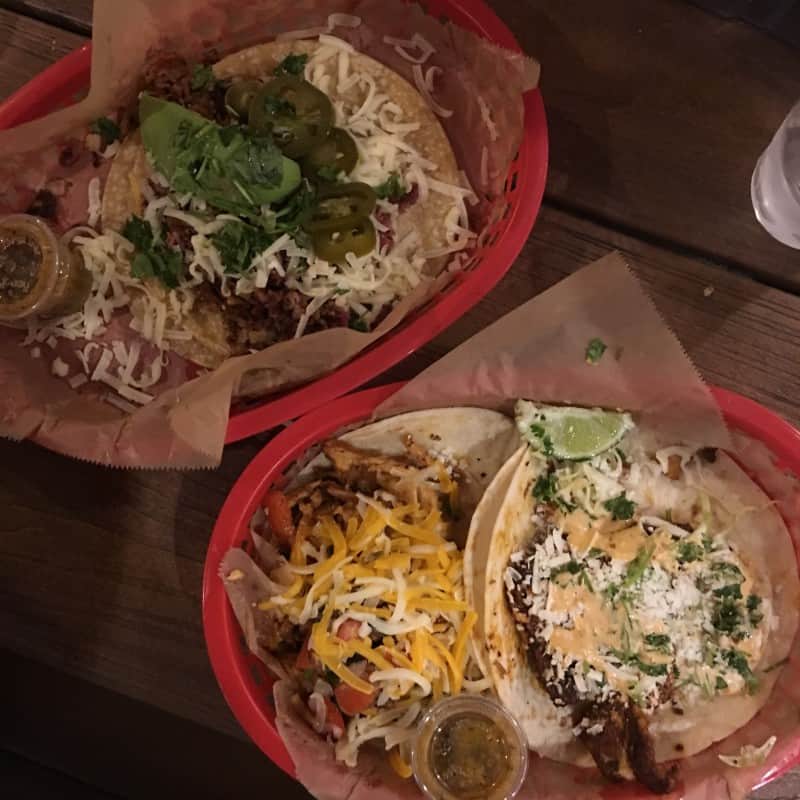 We called it a night around 9 pm and headed back to our house. The next morning, Sunday, we took another recommendation we had gotten and grabbed breakfast at Forthright. Neil got the croque monsieur and I got a waffle with salted caramel butter, maple syrup, and fruit. The ambiance was cute and the food was good, except that my waffle was already cold when it came out. I think the butter saved the day. 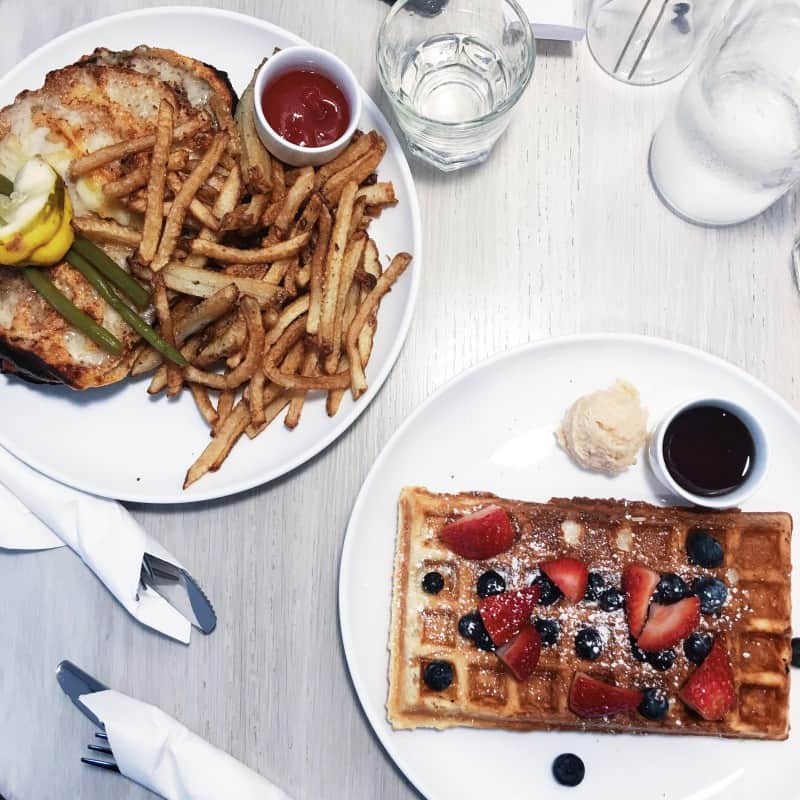 After breakfast we wandered around the city for a bit. We snapped this picture in front of the state capital. 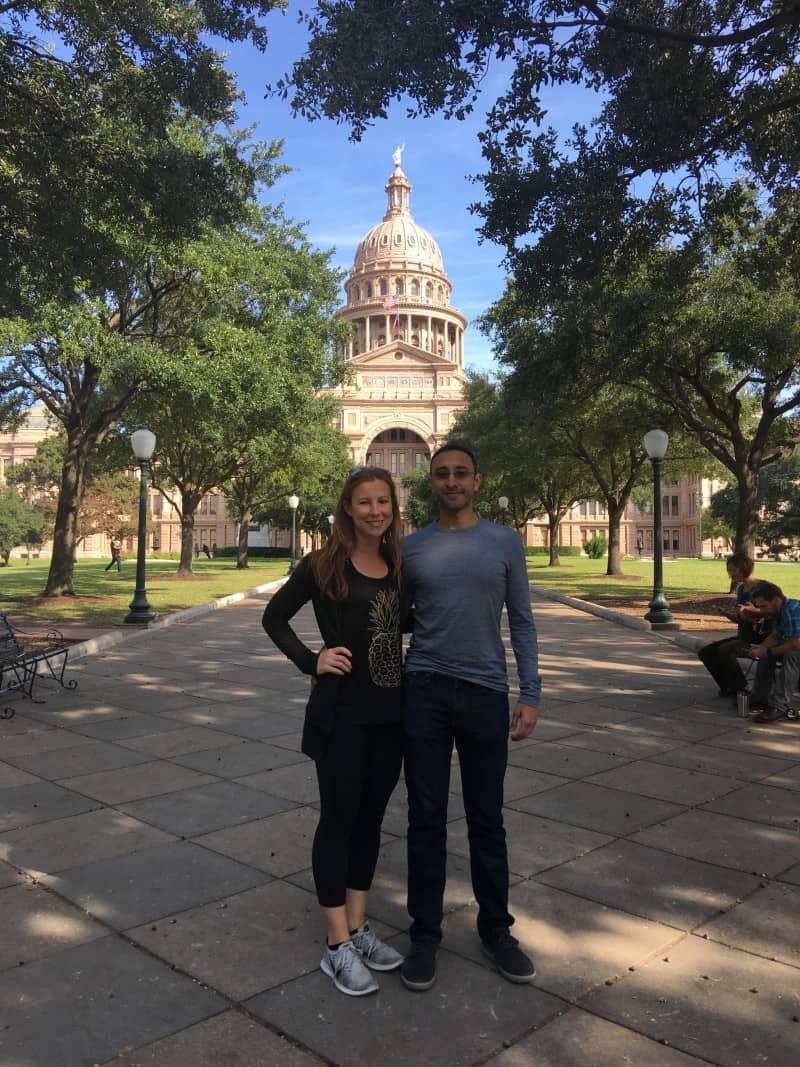 THEN we got donuts. Duh. We tried out Voodoo Doughnuts, which is originally based in Portland. I got this Capn’ Crunch and Crunch Berries flavor, but was still a little full from my waffle and not able to eat it all. Allllmost. 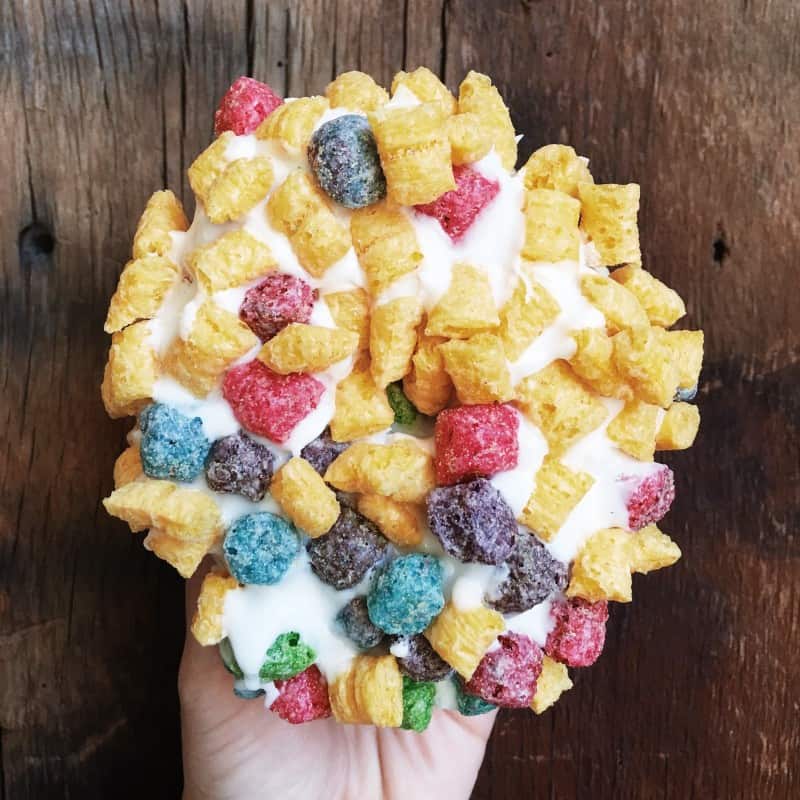 After donuts, we hung out in a coffee shop for a bit until we realized there were protesters heading up the same street we were parked on. We sprinted out to get in front of them so that we weren’t blocked in. Then we drove to Zilker Metropolitan Park and I grabbed this picture from under the bridge (that’s downtown Austin in the distance). 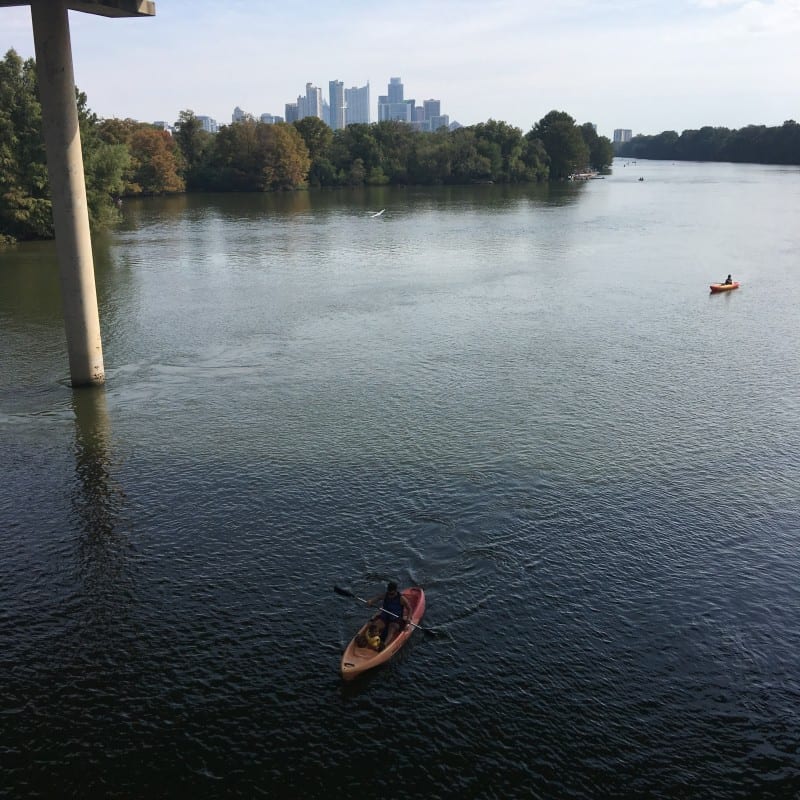 One thing to note is that Uber and Lyft no longer exist in Austin if you are planning to visit. There are a couple other options, but we just rented a car to make it easier. Just a heads up!

After exploring some in nature, we drove about 20 min out of the city to a place called Salt Lick BBQ. It was amazing. The parking lot is HUGE and we were afraid we were going to have to wait forever, as you sometimes do for BBQ in Austin.

We were seated immediately and realized that some of the wait was for live music that they have outside as well as the winery next door. I got this pulled pork sandwich on the softest bread ever made. 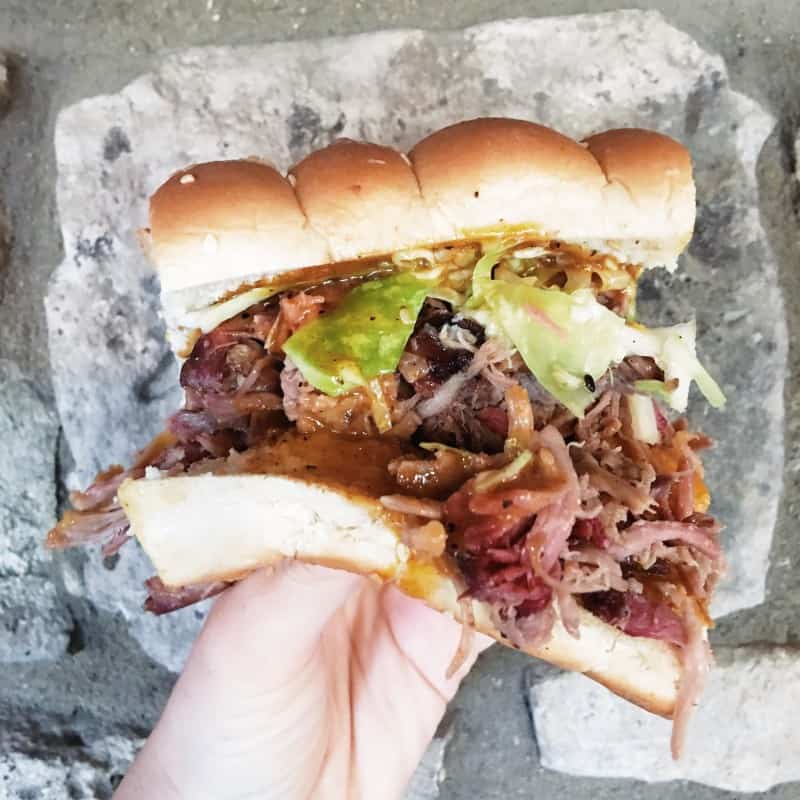 After BBQ, we stopped at some open houses since it’s something we like to do from time to time. Then we headed back to get ready for the real reason we were in Austin — holding onto alpacas for dear life! 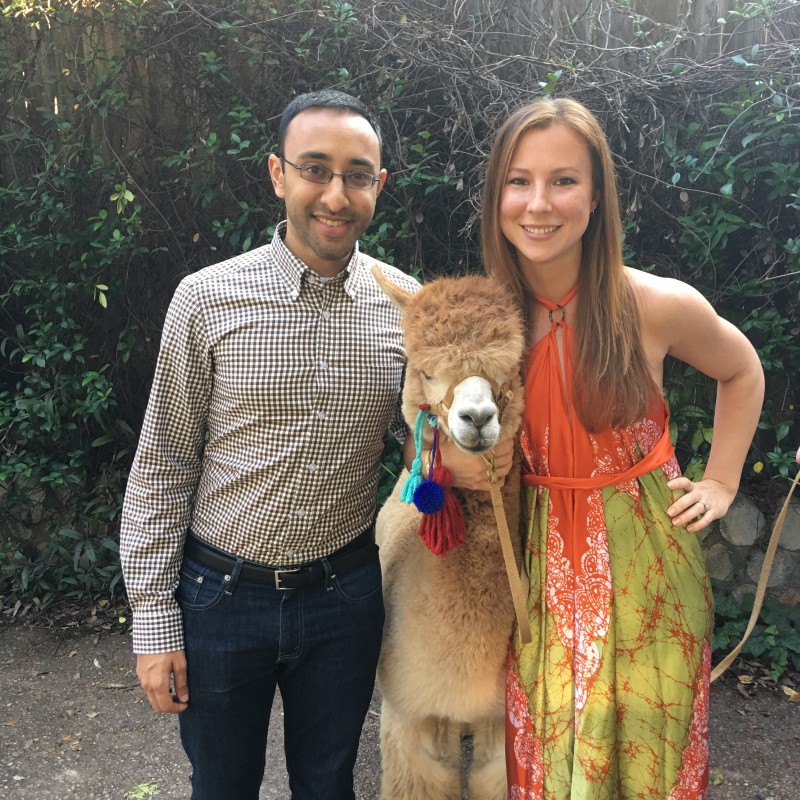 Just kidding. We attended a wedding reception for one of my friends at a beautiful yoga studio called The Sanctuary. There were tacos and cake pops galore! 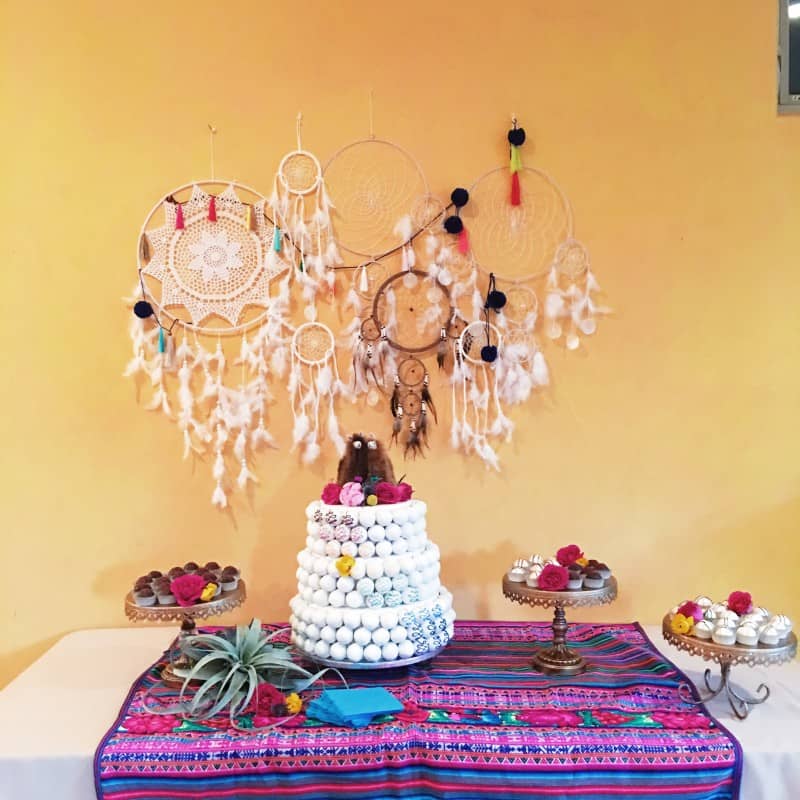 Originally, this was supposed to be a reception for the elopement that they took a couple weeks earlier. What we found out, however, was that they had staged the elopement and actually had a surprise ceremony with everyone present. It was so magical. 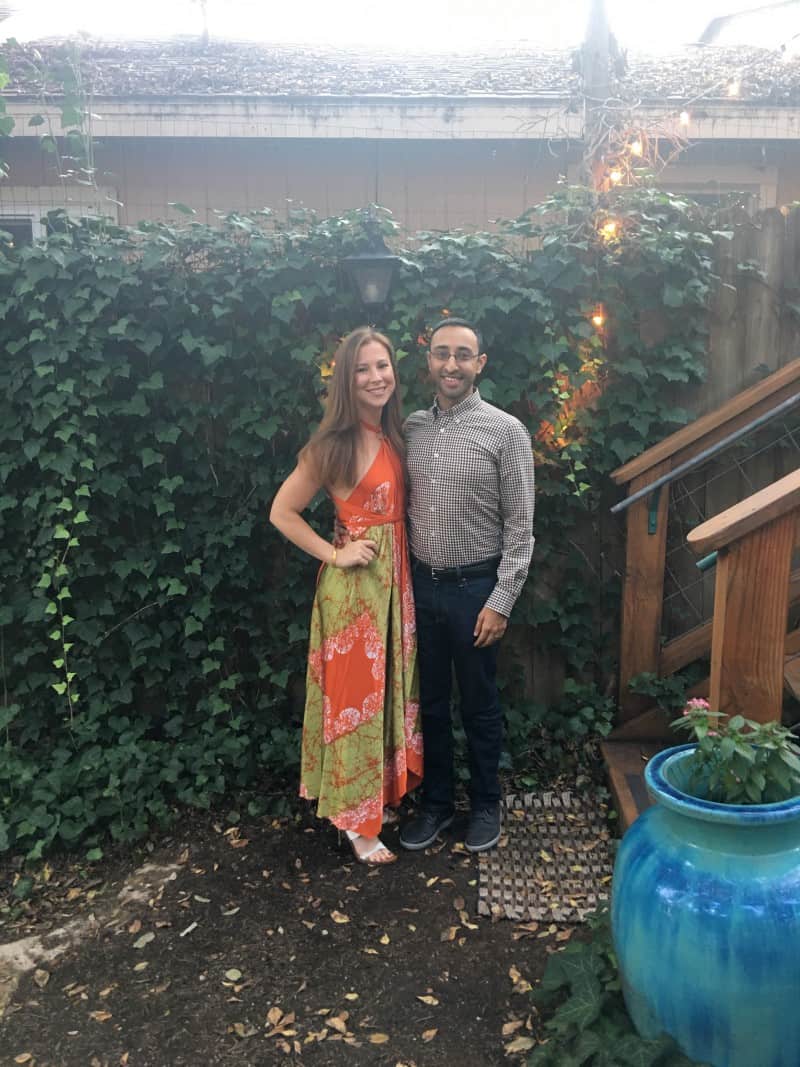 On Monday I woke up early to go to a class at Crush Fitness thanks to Kelly’s recommendation! She actually works there, so I was able to meet AND work out with her. I love the internet. If you’re in Chicago, the workout was similar to the ones at Shred415 — long treadmill intervals alternated with strength moves on the floor. I was definitely a sweaty mess when I finished.

On the way back to our adorable tiny house, I stopped off at Picnik — a paleo place that is known for it’s butter coffee and variations on it. I got a decaf butter coffee, added in some Vital Proteins, and was set to go. Also, how cute is this place too?? 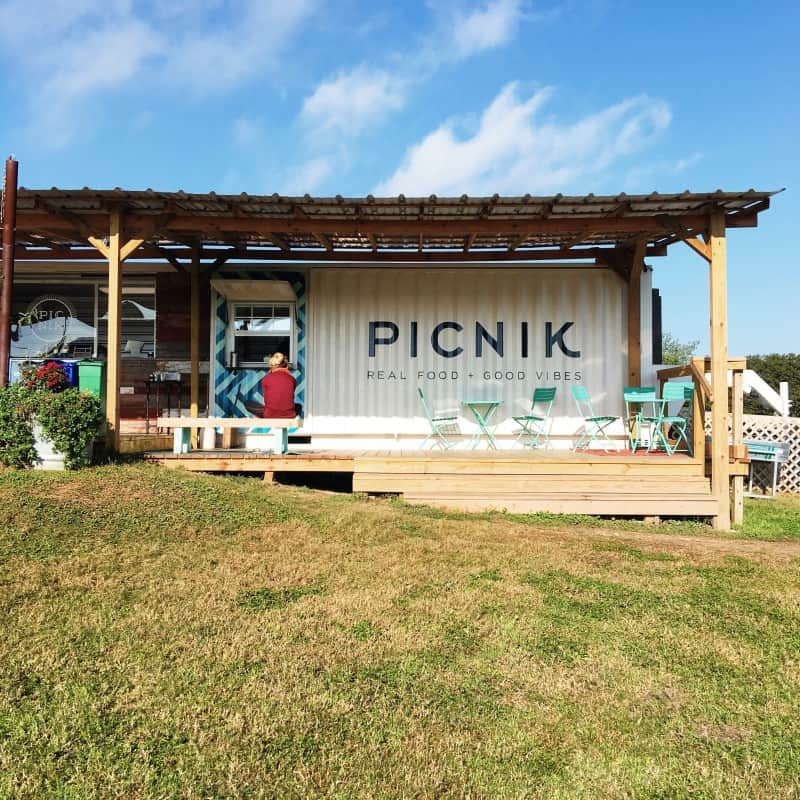 We checked out out of our house, I said bye to my new dog friend, and then we headed out to kill a couple more hours before going to the airport. We stopped for lunch at Bouldin Creek Cafe which is AMAZING. It’s a vegetarian place and I had a tough time deciding what I wanted to eat. I settled on this Buddha Bowl and the flavors were amazing. Seriously, if you have a chance to go here it needs to be on your list. 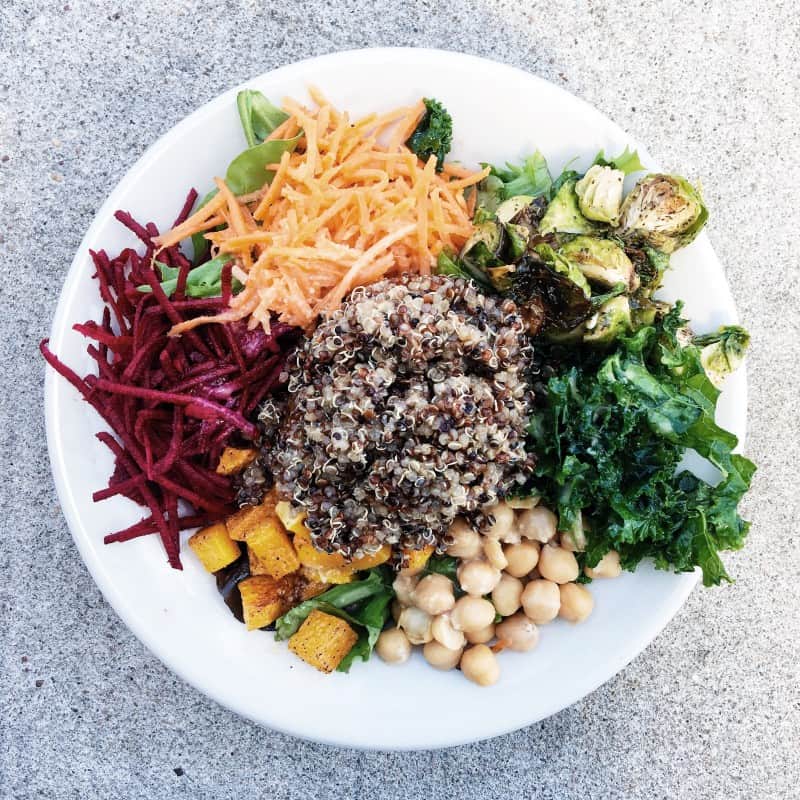 The rest of Monday was spent back at Whole Foods and the neighboring Starbucks. Neil had some work to get done, so I wandered the aisles since I love supermarkets so much. After that, I strolled around outside in the sun, spent some time in a local independent bookstore, and PLAYED WITH A BABY GOAT. #adventuresinaustin

We got back to Chicago around 8:30 pm and I went to bed not too long after that since I had to be up early to teach on Tuesday. We had a great time in Austin and I’d definitely go back and eat more food 🙂

25 comments on “Weekend in Austin”