Neil and I recently got back from a 10-day trip to Greece that included Crete, Santorini, and Athens. While every other major trip we have taken has been through sites like Groupon and Living Social, the only Greece option we were able to find at the time got terrible reviews, so we decided to GO CRAZY and book everything ourselves. It took an entire day of deciding how long to go, when to go, which islands to go to and for how long, and much more, but after a lot of headaches, WE HAD AN ITINERARY.

As some of you may know from social media, I ended up getting food poisoning/mystery illness/black plague a day after arriving, which slowed us down and prohibited us from being as active as we wanted to be. It was still a great time, however, and here’s a recap of what we did with it! The first stop on our trip was the island of Crete. We spent a lot of time planning out this vacation and just figuring out which islands to visit and for how long.

We decided on Crete for a couple reasons — one, it wasn’t an island that I typically hear many people visit and two, there were several beaches and nature spots that looked too good to pass up. One of our planned items was an all day hike at a place called Samaria Gorge, but Neil recently hurt his knee so we decided to skip it. That ended up being a good decision after I ended up with the ol’ food poisoning.

Before that fun, however, we landed at the airport, picked up our rental car, and drove straight to Balos Beach. It was about 90 minutes from the airport and since we landed so early in the morning, it made sense to go there first since we weren’t able to check in to our Airbnb until the afternoon anyway. 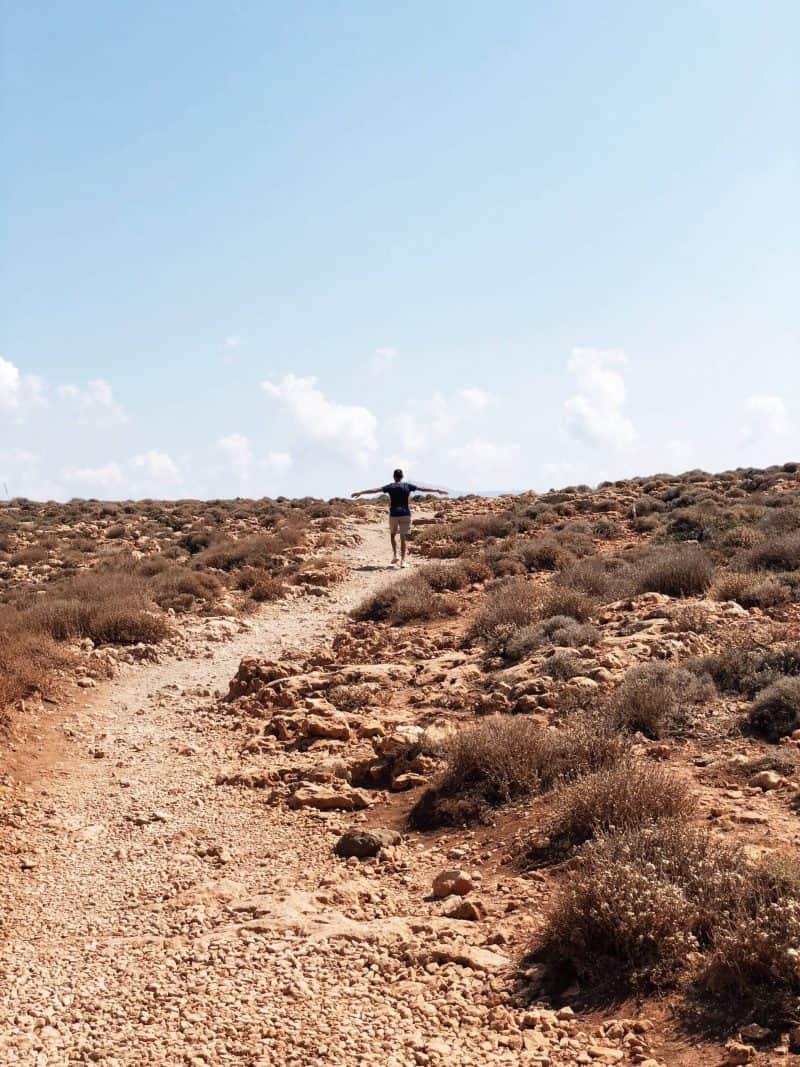 Many of the reviews I read online said that there was a perilous dirt road that you had to travel followed by a 20-min hike to get there, but the pictures looked so beautiful that we decided to give it a shot. The drive was unpaved and bumpy, yes, but nowhere near what it was built up to be in numerous reviews. It was wide and there were wild goats and it was a bumpy, but great, time.

After parking and walking a pretty easy 2 km, we were greeted with this sight. 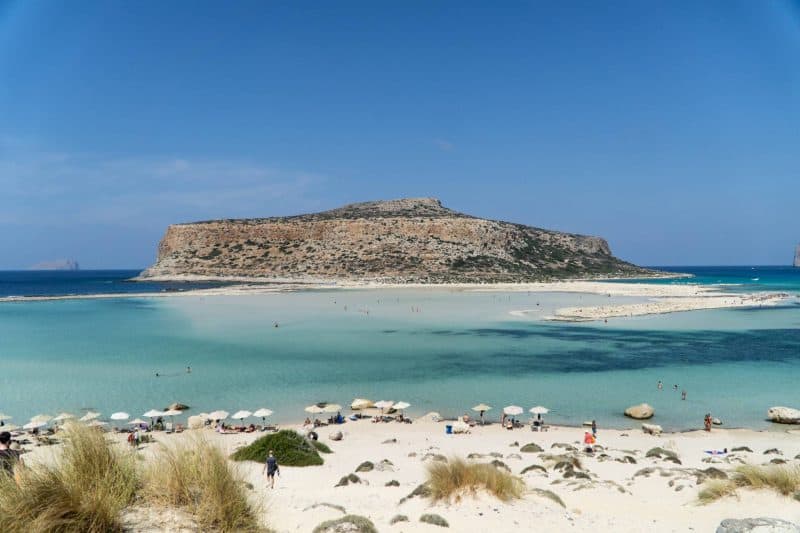 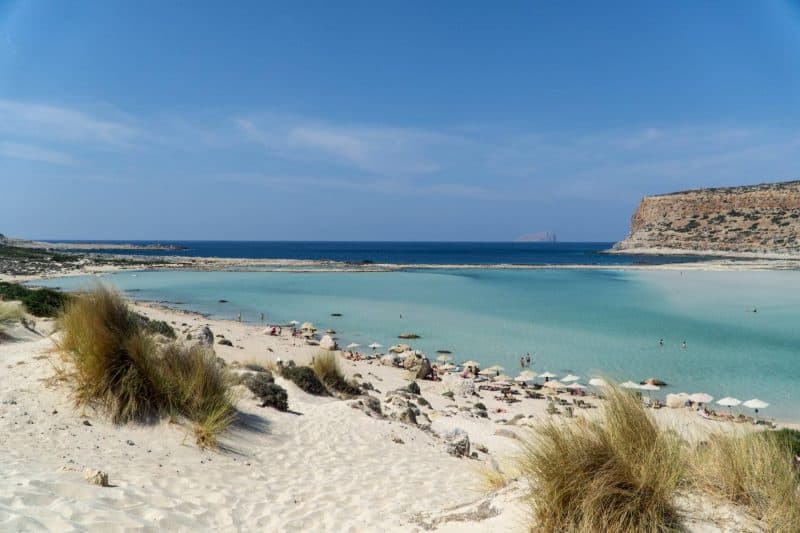 We actually had just enough time to drive here, walk down, take pictures, and touch the water before we had to head back to the main town of Chania where we were staying. I think it was worth it. 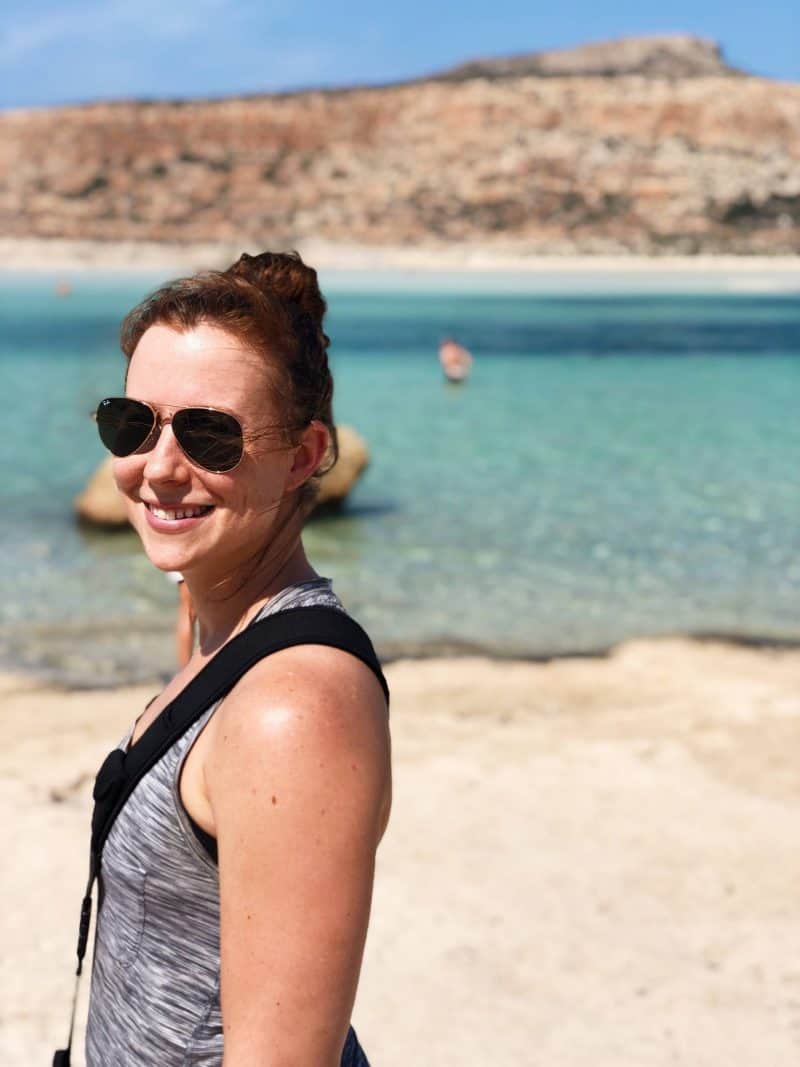 We checked into our Airbnb, grabbed some street food (potentially the poisoning culprit), and just hung out in Chania for the rest of the day. We had already had a long time of travel and just wanted to relax, so we headed to bed early and planned to wake up early for the next adventure. 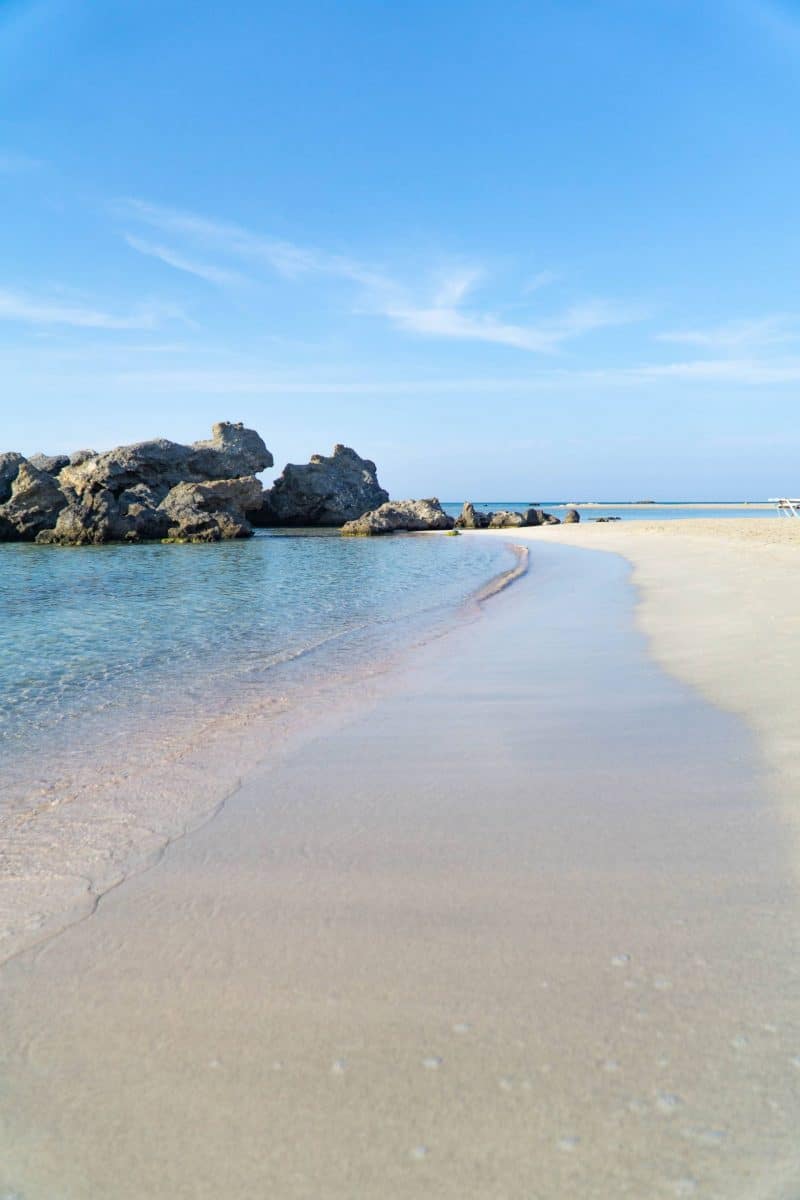 Almost immediately after arriving, my stomach started to protest and everything went downhill from there. I’ll spare you the details, but it was not a pleasant rest of the afternoon. I was able to take pictures and spend some time in the water before we decided that it was probably best to start making the drive back.

It was really a beautiful beach, but if you go, make sure it’s early before it gets really crowded. Also keep in mind that the bathrooms cost 1 euro and don’t open until sometime between 9 and 10 am. 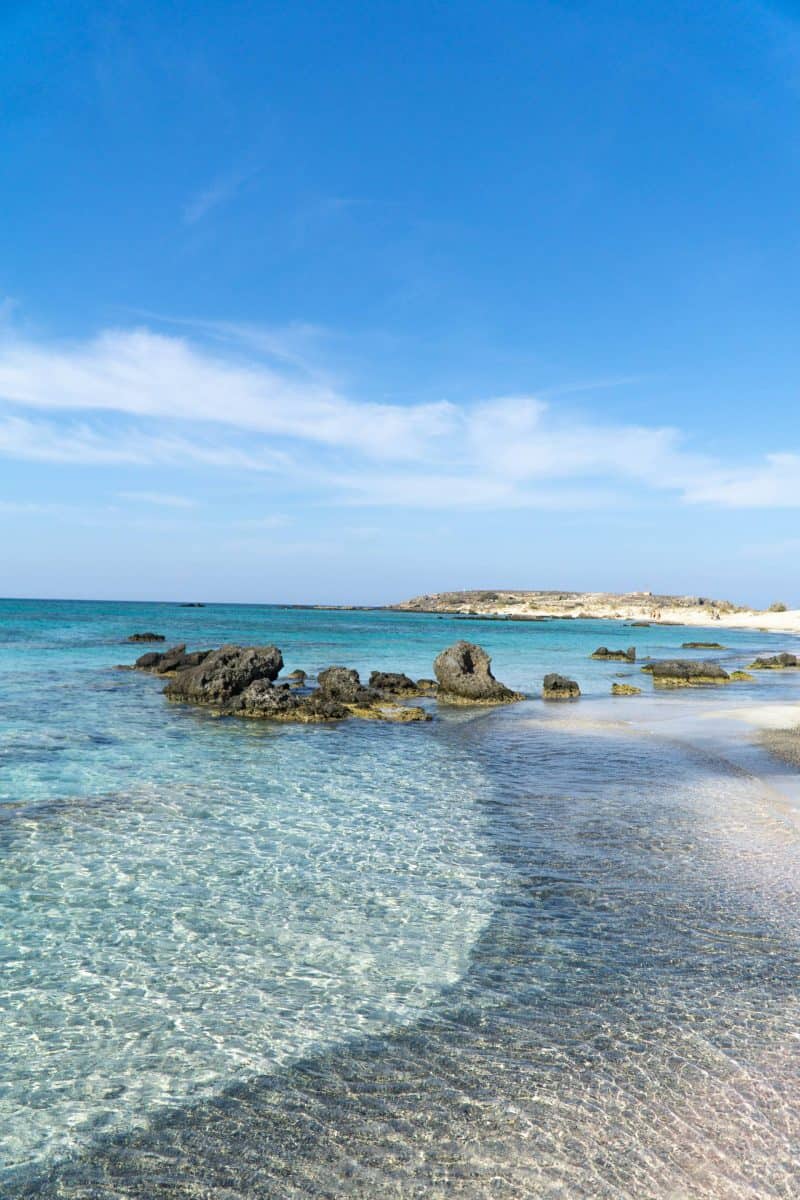 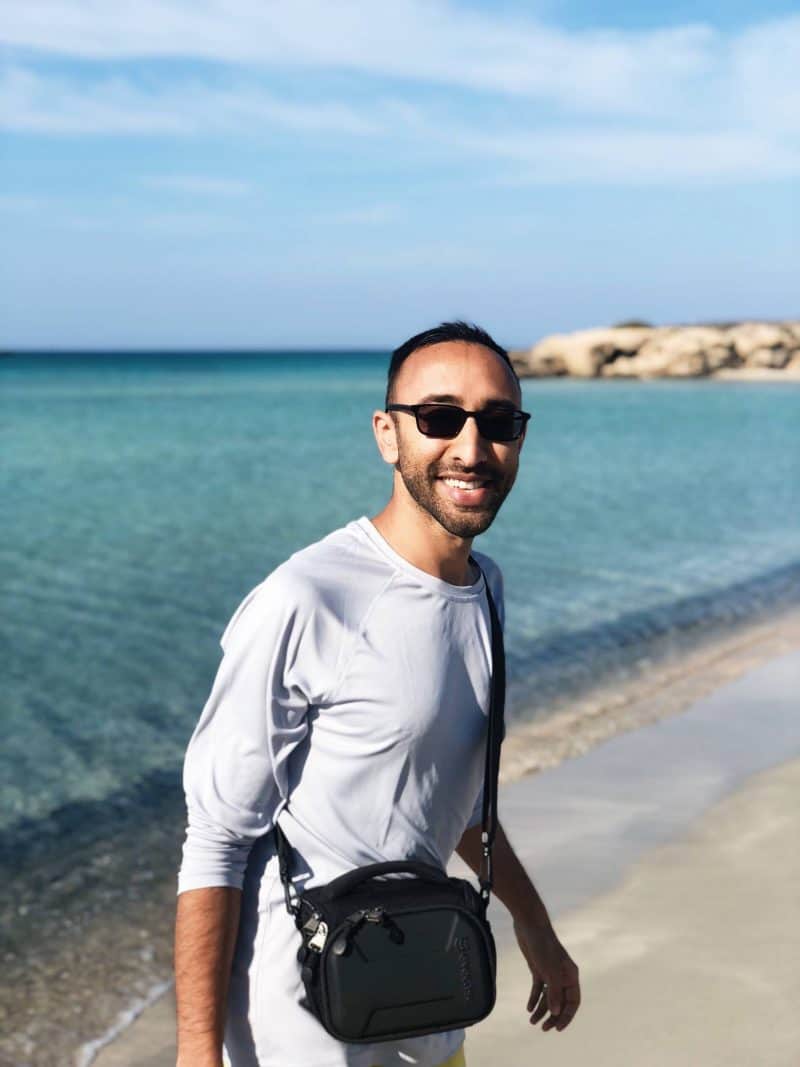 By the time we made it back, all I wanted to do was lie down and sleep. I spent the rest of the day curled up on the lounge bed on the balcony and the breeze off the water was one of the best feelings.

The following day we had an evening flight to Santorini via Athens, so we still needed to occupy the majority of our day. We checked out and headed east to another beach town, Rethymno, which was an adorable place to spend a few hours before heading to the airport. 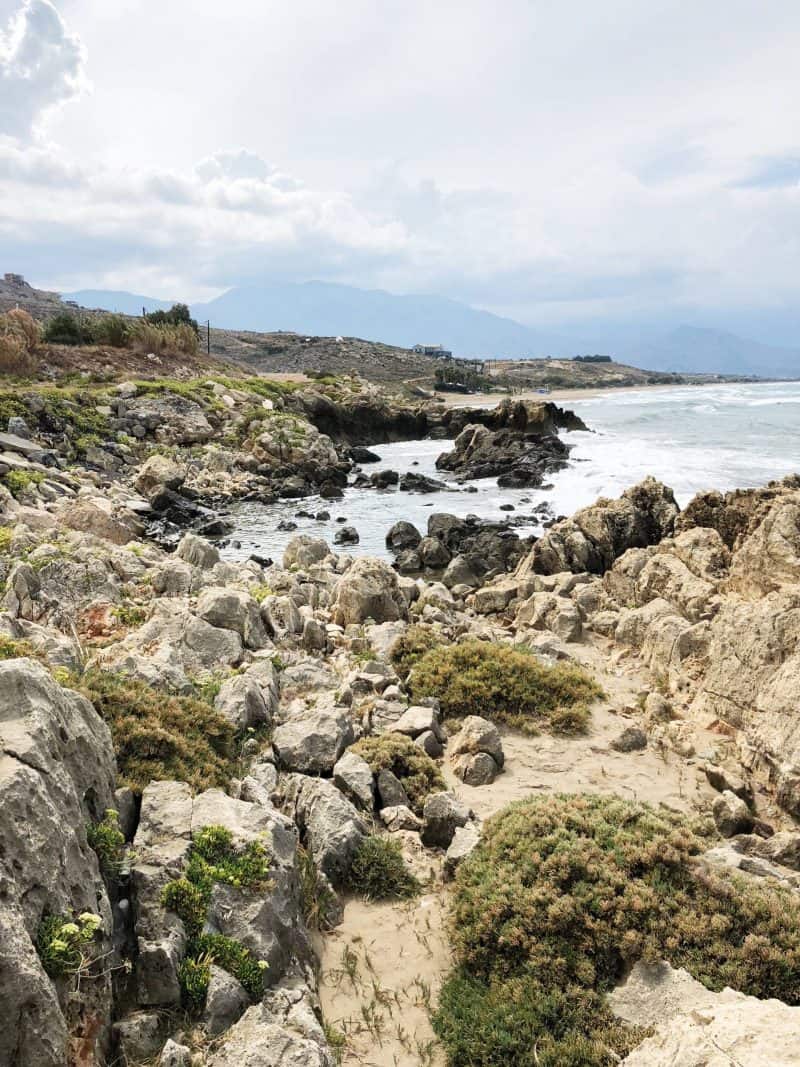 I decided I would eat seafood spaghetti for lunch, which wasn’t the best decision, and although it was never as bad as that first day, I had stomach issues for almost the entire duration of our trip. 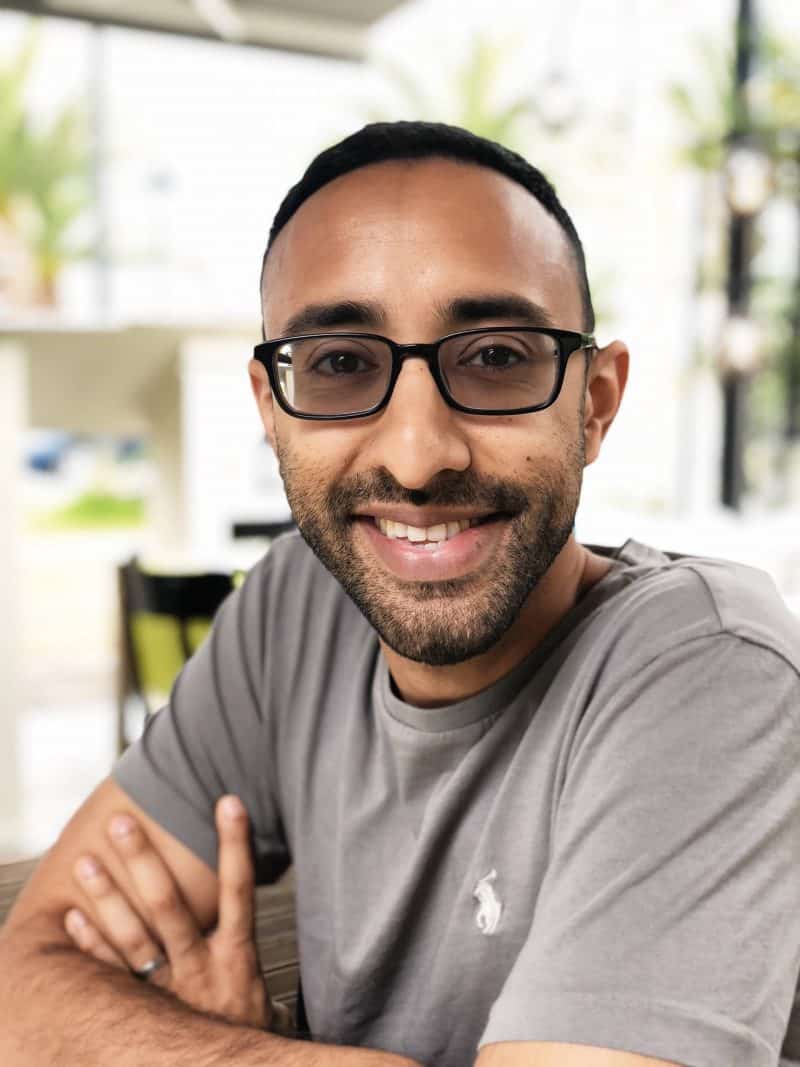 I really enjoyed our time in Crete and it was one of my favorite islands we went to. Neil also enjoyed getting frappes with ice cream, although he was never able to find another one he loved more than this one. 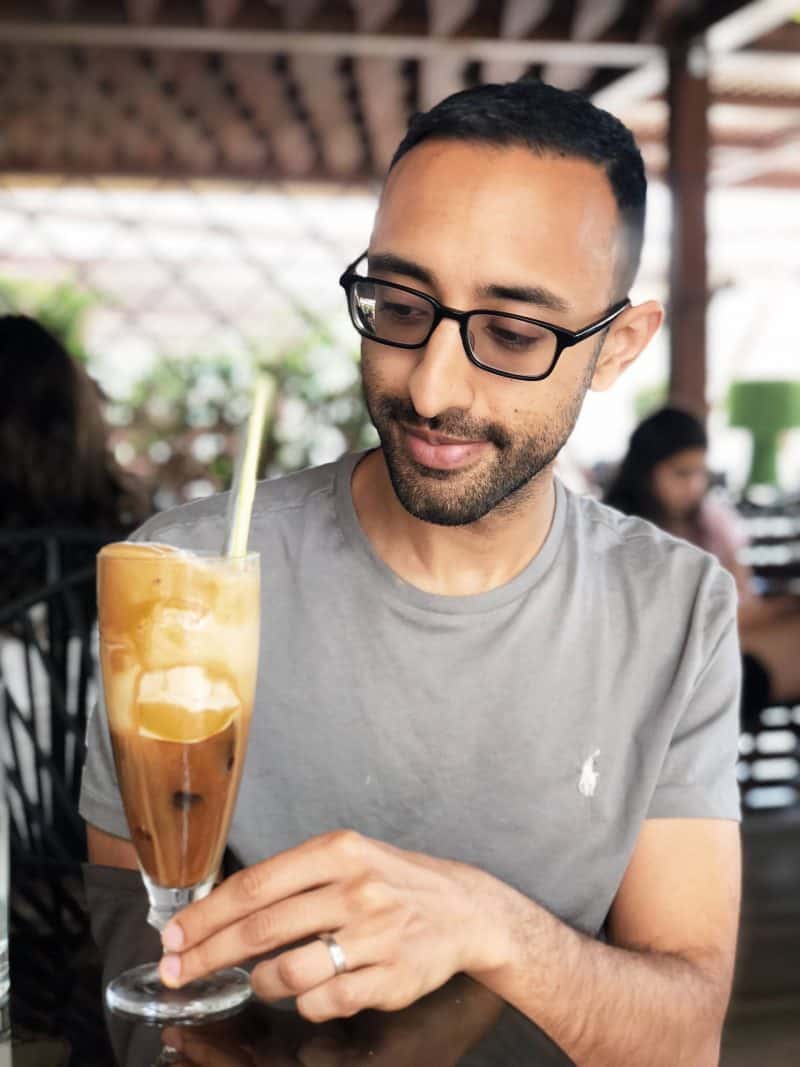 Although I had little to no expectations of Crete, I felt like everyone talked about how wonderful Santorini was and I was prepped to be blown away. Truthfully, it was probably my least favorite of the three places we visited. Our stay in Kamari — a less popular black-sand beach town — was probably the thing that made me enjoy it the most. 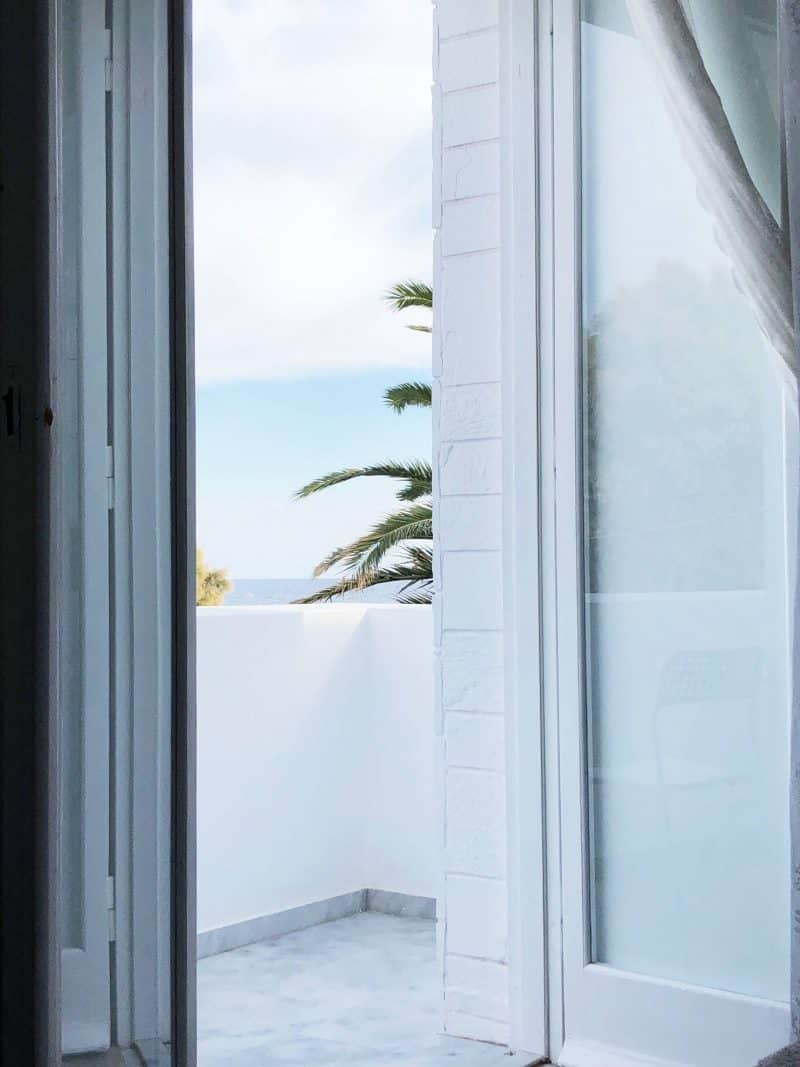 We had planned the most days of all for Santorini, but in retrospect I think I would have given us another day in either Crete or Athens and shortened this part of the trip. We took the very affordable public bus to visit Fira and Oia (pronounced “ee-yah”) — two of the most popular cities on the island. When you think of the bright blue and white of Greece, this is it. 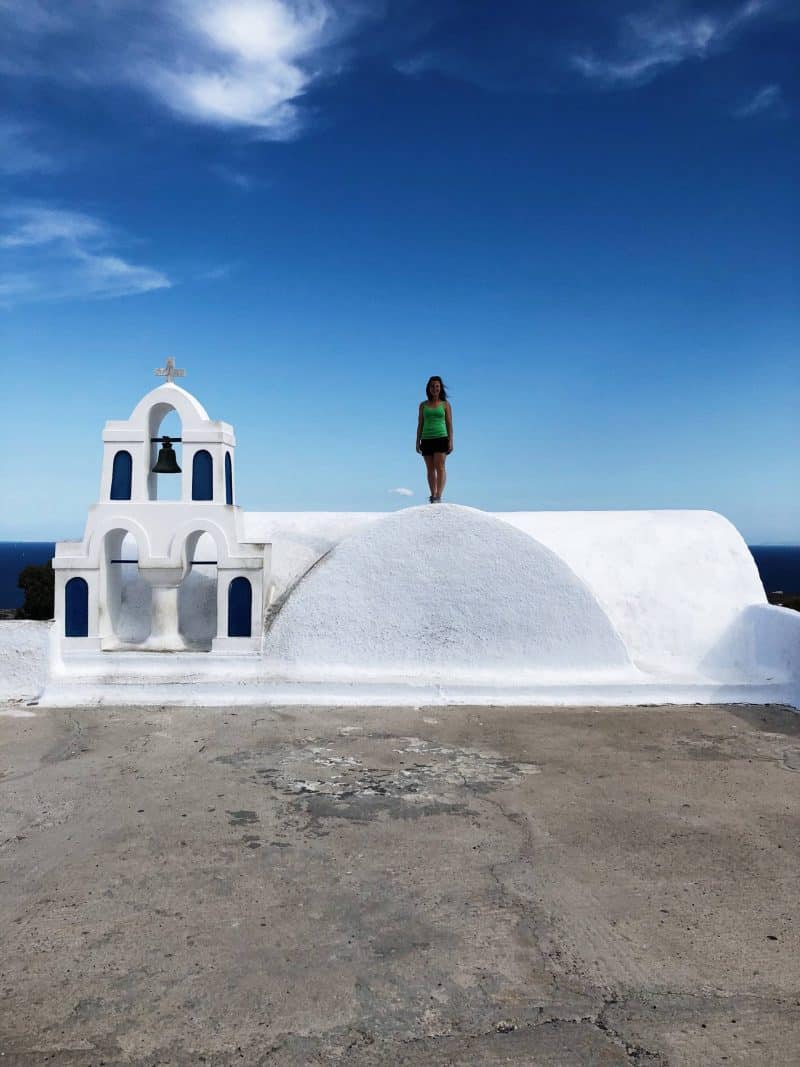 The problem with both cities, for me, was that there were so many tourists. For some this isn’t an issue at all, but I’m not a huge fan of crowds and I didn’t feel like I was able to get lost in the cities like when we were in Italy. I took the obligatory pictures, marveled at the sights, and then was ready to call it a day. 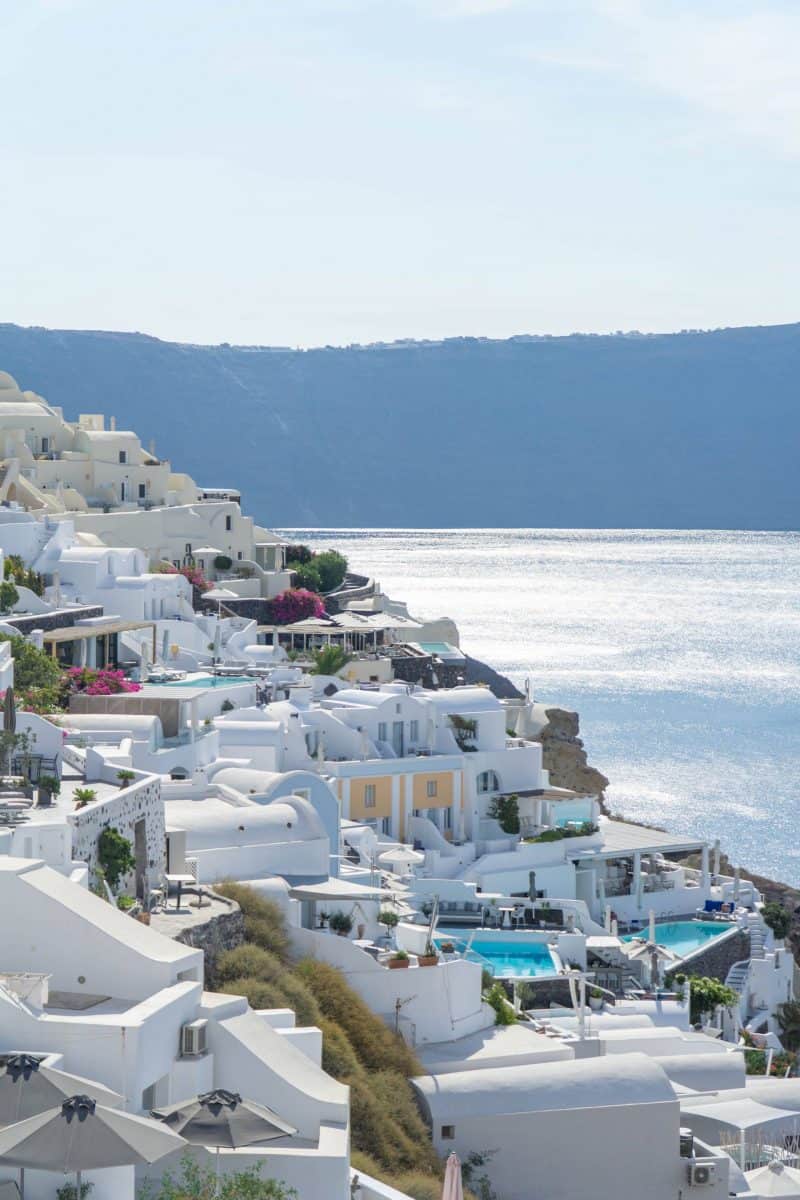 We had originally booked an all-day tour of Santorini through Viator (where we book all our tours), but the night before I barely slept and was still sick, so we emailed them to see if we could move it to a later date. I wanted to take the time to point out the great customer service they have because not only did they move it, they also refunded it completely when we ultimately had to cancel it altogether two days later. I completely expected to lose that money, but they refunded it without me even asking. Definitely recommend Viator if you ever looking for tours to take when you travel! 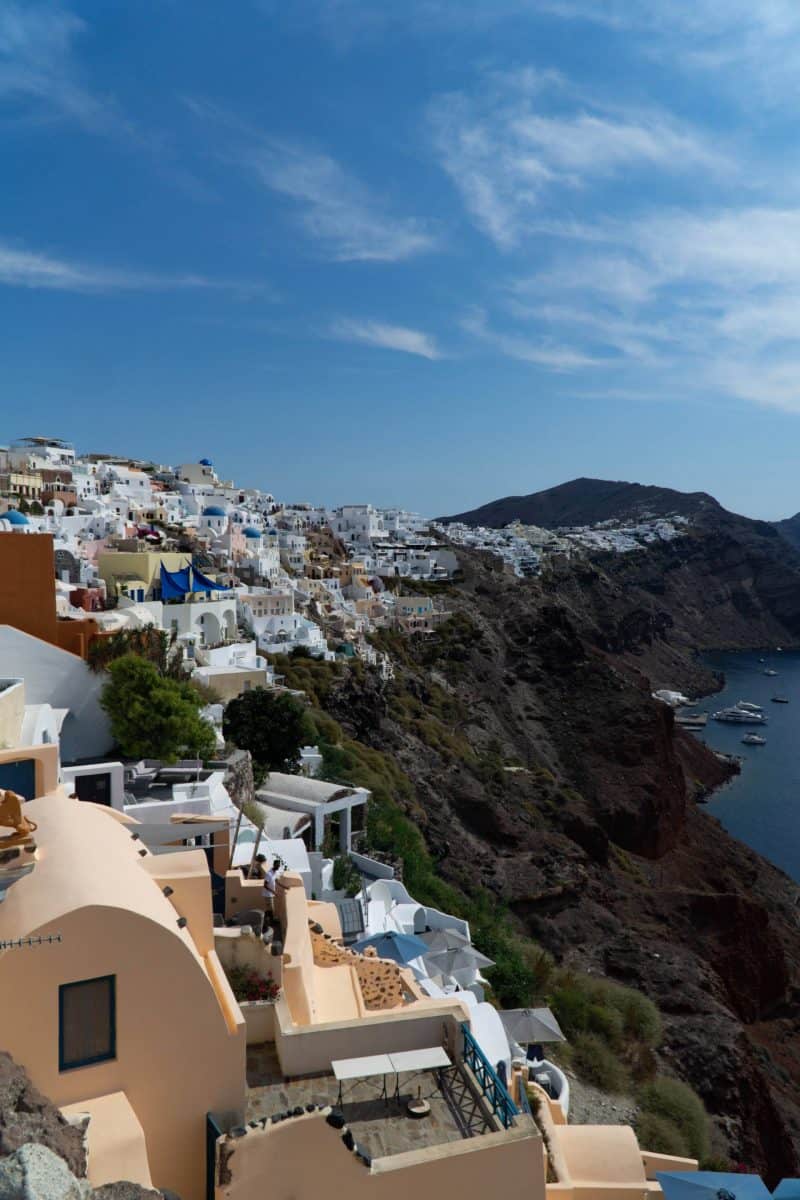 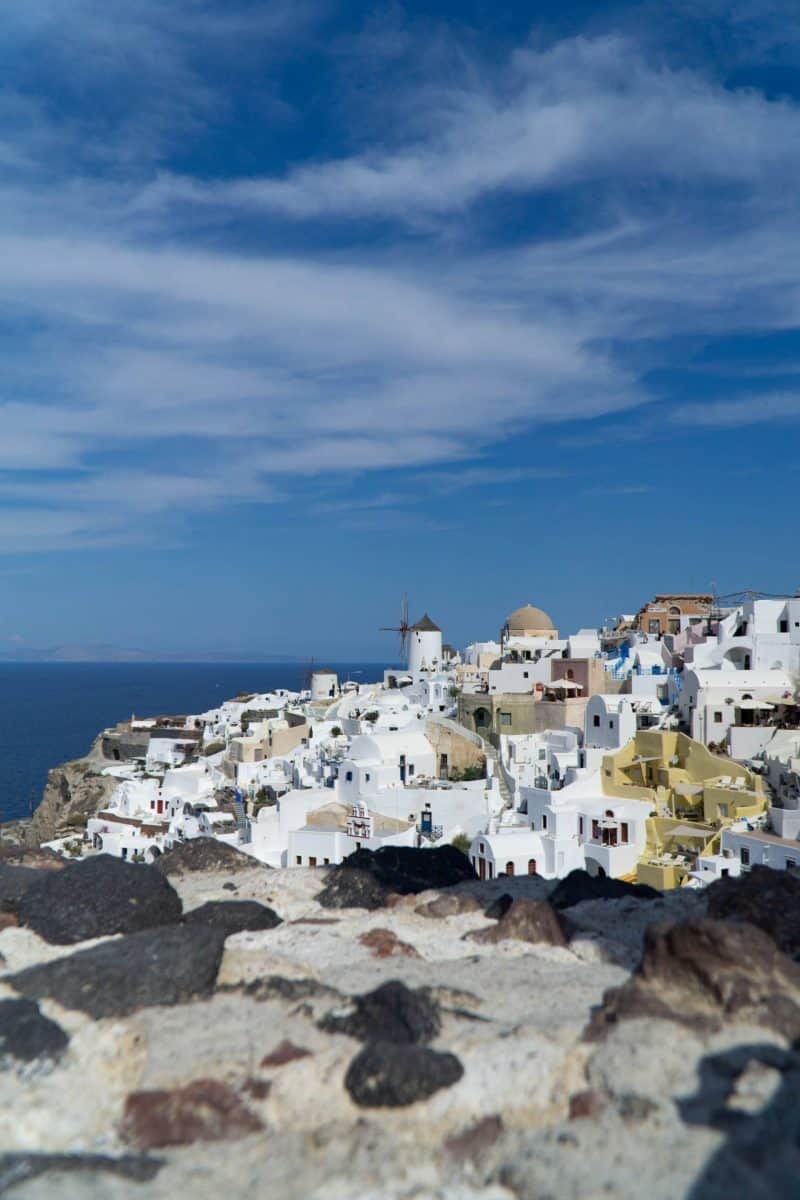 My favorite place in Oia was a store called Atlantis books. It felt like walking into an old hidden book cave and all the walls were lined with books from top to bottom. It was amazing. 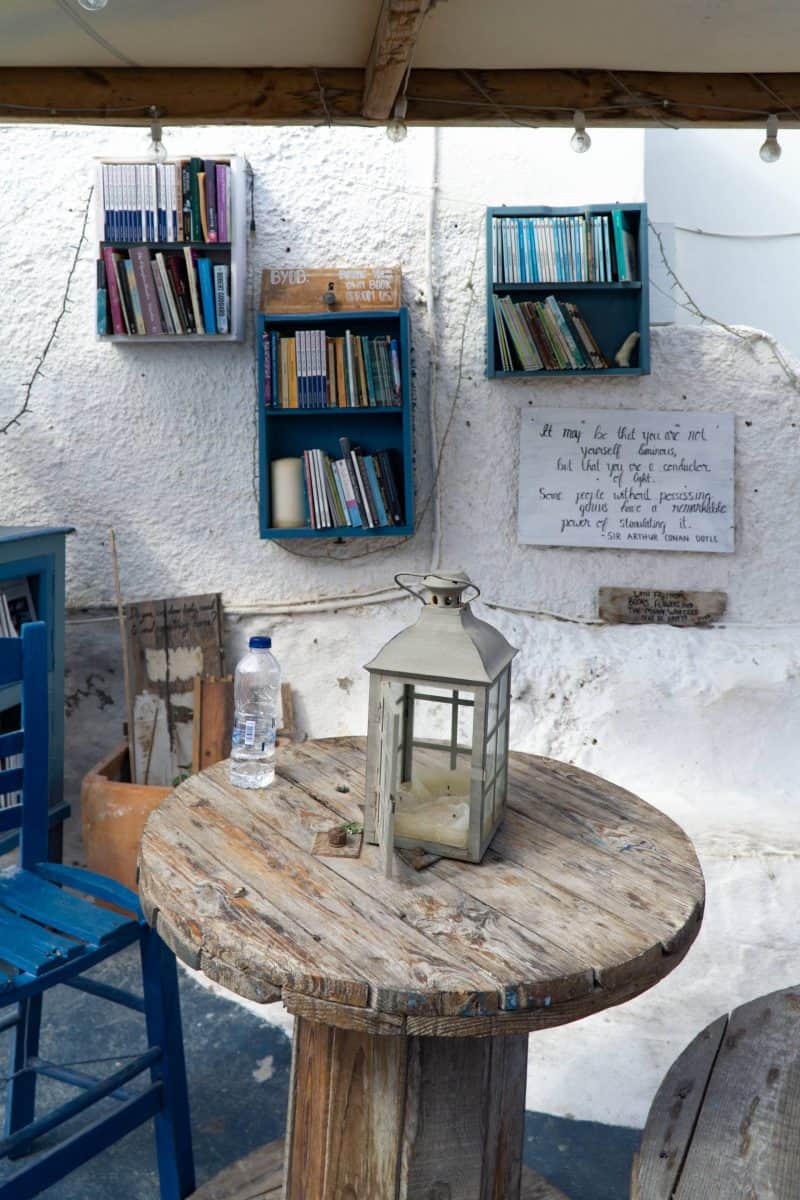 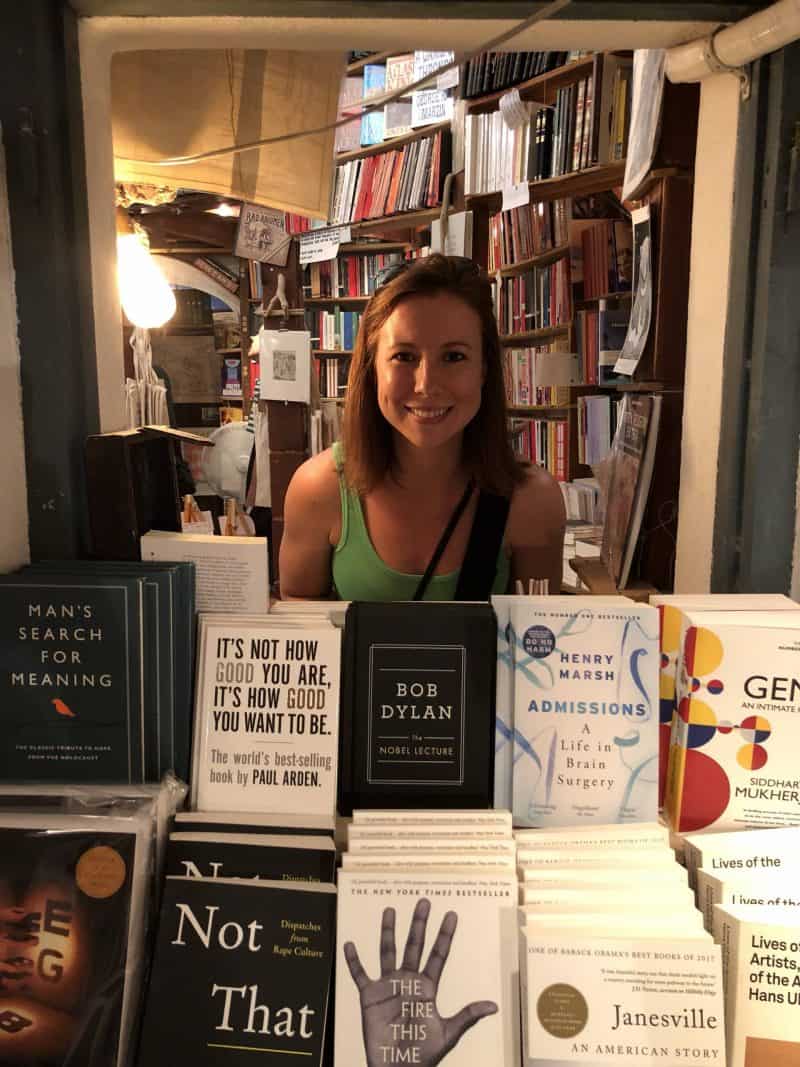 We followed the 200+ steps down to Amoudi Bay where we explored some Byzantine ruins and just hung out by the water. Warning: don’t forget that you then have to walk up said steps again. Ha. 🙂 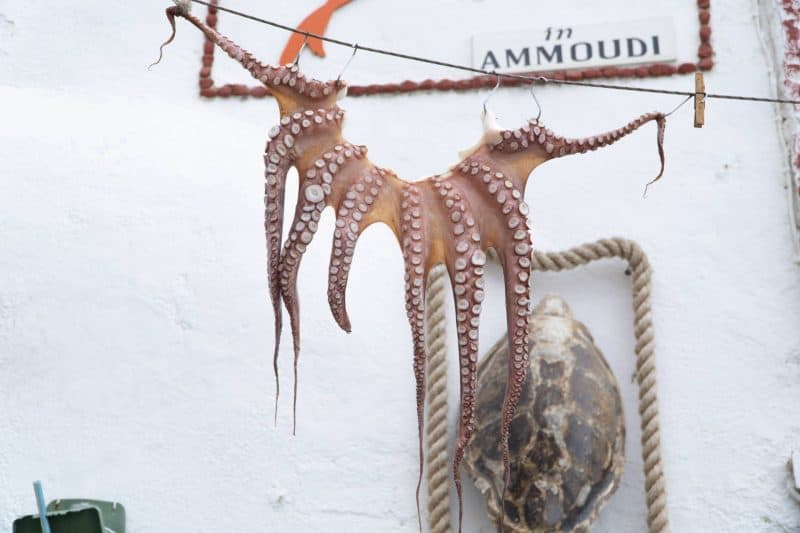 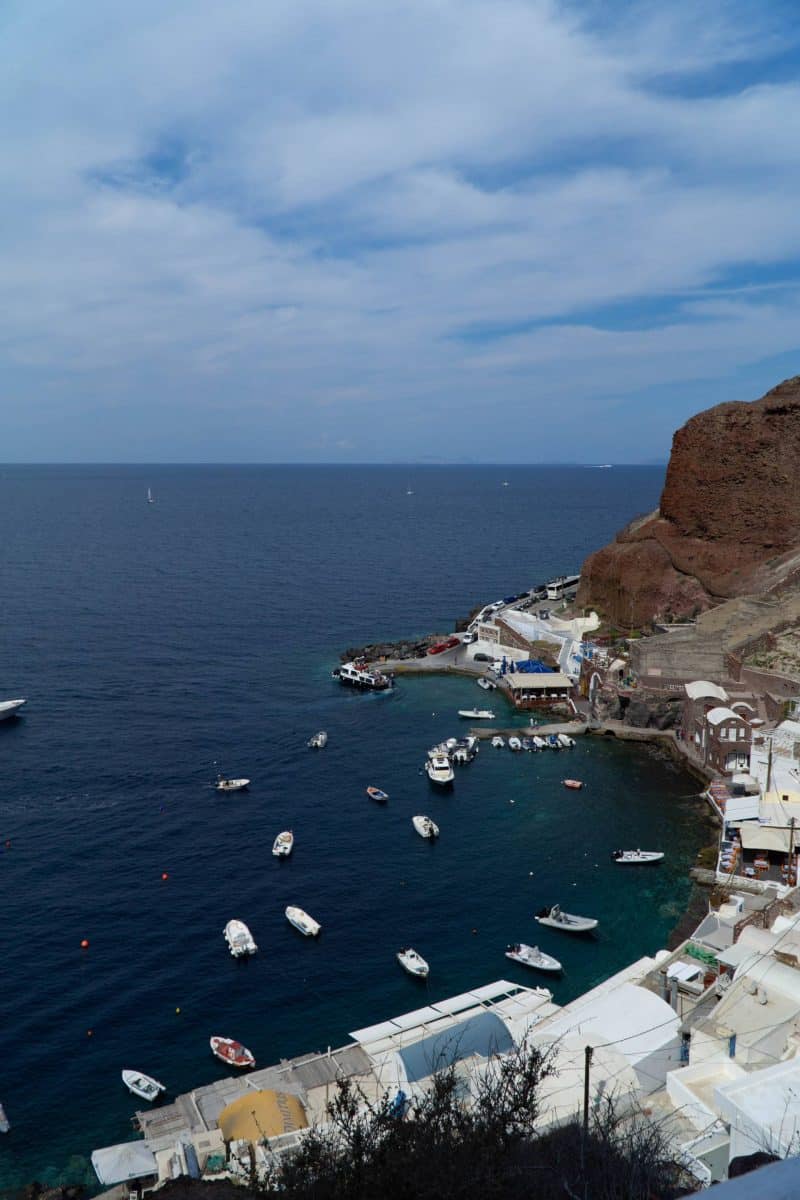 After exploring the cities, we had a lot of downtime to spend in Kamari which I would highly recommend if you’re a little more crowd-averse like me. There were still plenty of tourists, but it didn’t feel smothering. We spent time laying in the sun, swimming, and I ate lots of bread. 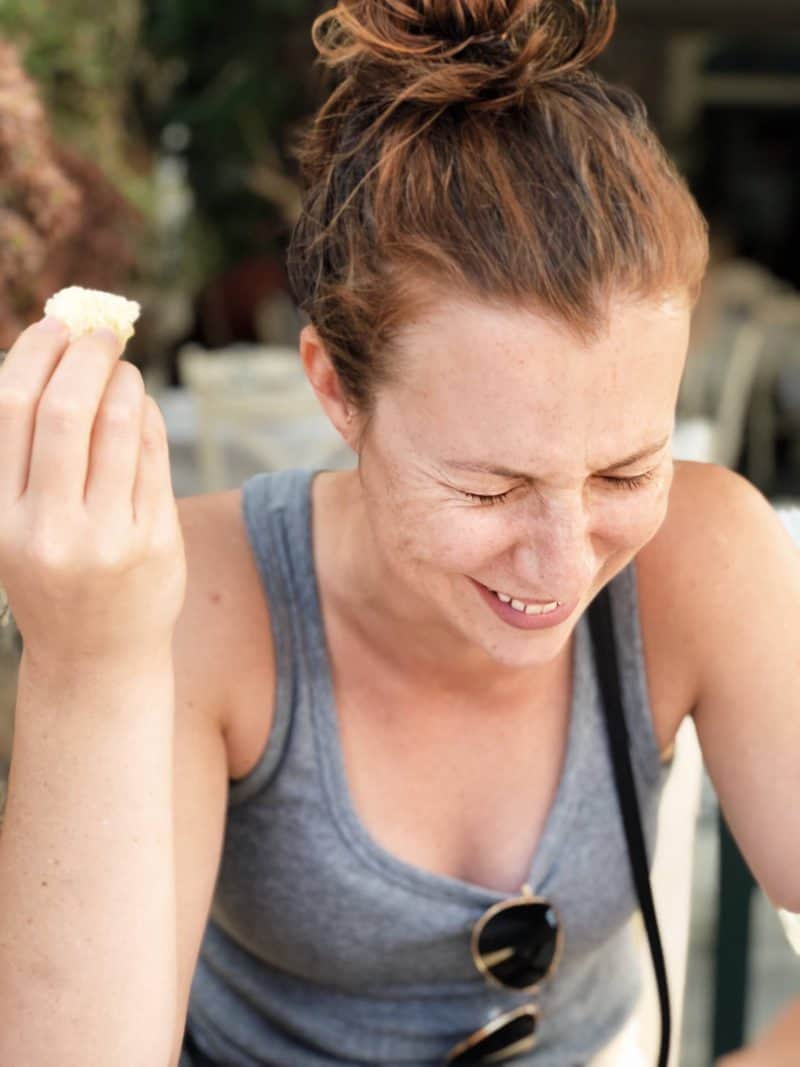 A note about the Santorini airport: it got terrible reviews online, which as we read through seemed almost laughable. When we went early to hang out, however, we realized they weren’t kidding about it being VERY small, little to no seating anywhere, no A/C, and just limited facilities in general. If you have to fly out of Santorini, just note that it’s not a fun airport to hang out in.

My favorite city when we went to Italy was probably Rome, so I felt like it might be the same way with our trip to Greece. We had a shorter time in Athens — only one full day — so while I liked it, I wish I had had more time to explore.

We wanted to make sure that we visited the Acropolis, which was PACKED when we went. The Parthenon is also undergoing restorations for another two years, so much of it was covered in scaffolding, which was a little disappointing. Still, it was great to learn more about the history and see it in person, but be prepared for a LOT of people. 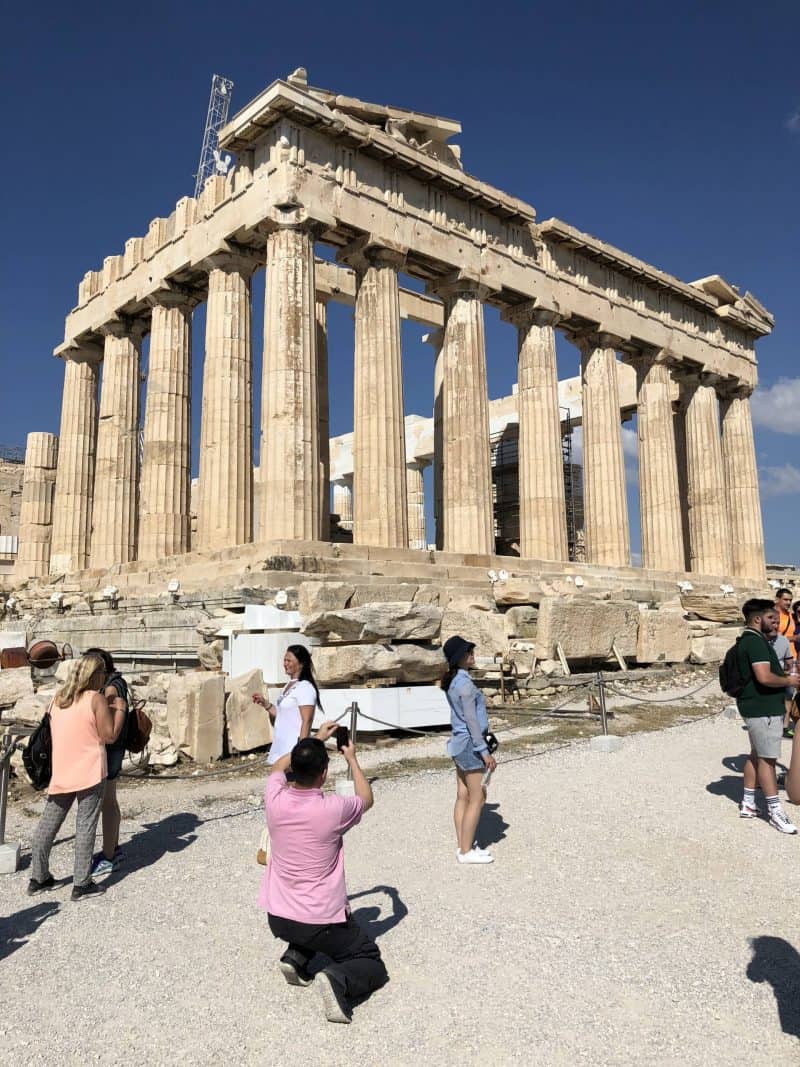 We walked around our Airbnb area, ate food, and just worked on decompressing before our trip back home the next morning.

Best things I ate on our trip:

Obviously, I feel incredibly lucky to be able to go on this trip, but I think my enjoyment was dampened slightly by getting sick and my mental preoccupation with being around a bathroom at all times. 🙂 I may not have been able to make the most out of every place we visited, but I was happy to be visiting what I could and spending time with Neil away from work and home commitments.

We took two amazing overseas trips this year and I’m so grateful to have been able to experience them. We don’t have any more big travels planned for awhile, but we may take shorter domestic ones in the future. Stay tuned. 🙂

P.S. Thank you to everyone who followed along on Instagram and gave us recommendations, made me laugh, and just showed genuine concern when I wasn’t feeling 100%. You all are the best.