Disclaimer: This post is sponsored by FitFluential on behalf of Humana.

Last Sunday I had the opportunity to run the Chicago Rock ‘n’ Roll Half Marathon which was sponsored by Humana. As I mentioned in a post last week, I was completely unprepared to run this race.

Following the Chicago Spring Half Marathon in May, I spent a month doing nothing but working out at Hardpressed, then lately I have been back at Sweat taking classes. I had done no dedicated running, so of course signing up to run 13.1 miles sounded like the best idea possible.

I arrived home from Blogfest Saturday night and didn’t get to bed until after 11 pm. My alarm was set for 5 am, but for some reason I woke up around 4 am. Seeing that I had less than an hour until the alarm, I knew I wouldn’t be able to fall back asleep, so I just rolled around a bit and pondered if this would be the last time I see my room because I may or may not die in the next few hours.

I got up, got ready, ate some almond butter on cinnamon raisin Ezekiel bread (mmm), then headed out. Neil was a great sport and came with me since I had to pick up my bib and I didn’t want to check any of my gear if they gave me the bag I couldn’t get from the expo.

One thing about being outside so early is that there are no people and you get great half-awake shots like this. 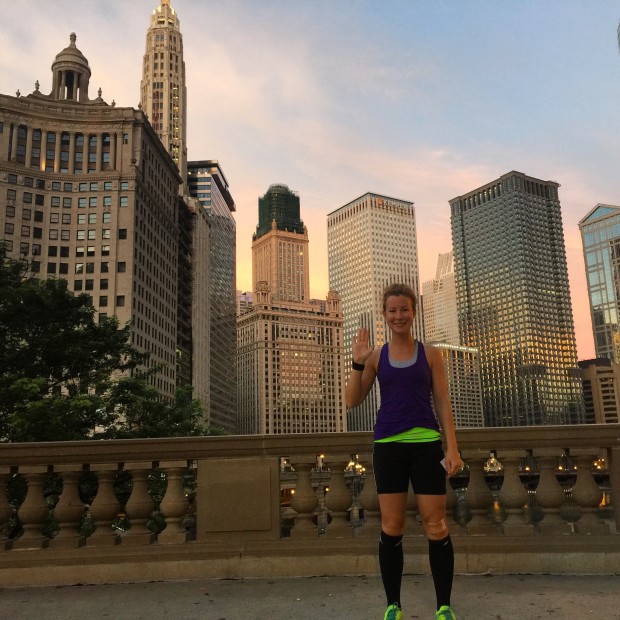 The race started in Grant Park. 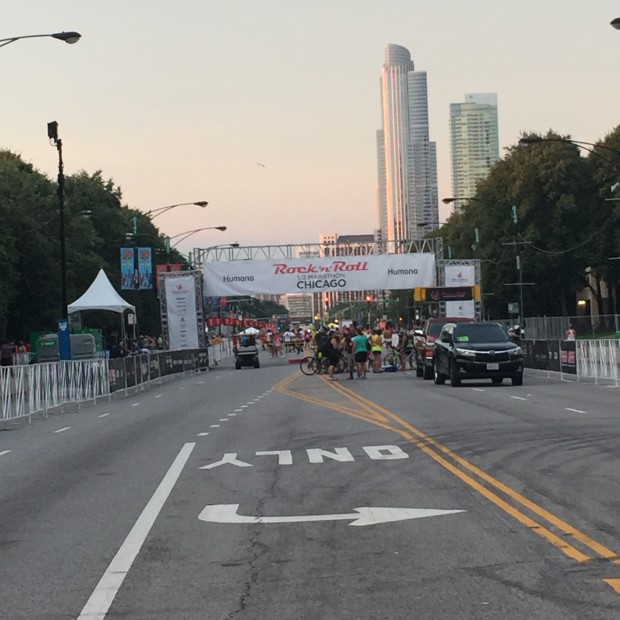 Since I got there early to pick up my bib, I helped myself to these banana tables so I had enough fuel to get through the race. 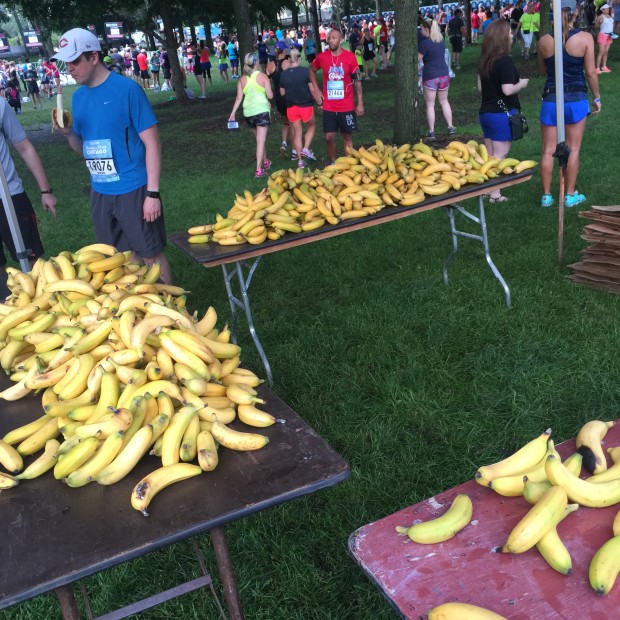 I also had time to go to the bathroom which never happens. So far the races I have run have been close to where we live so there’s no last minute bathroom needs. Same was true here, but there was so much time to kill that I went just for the heck of it. 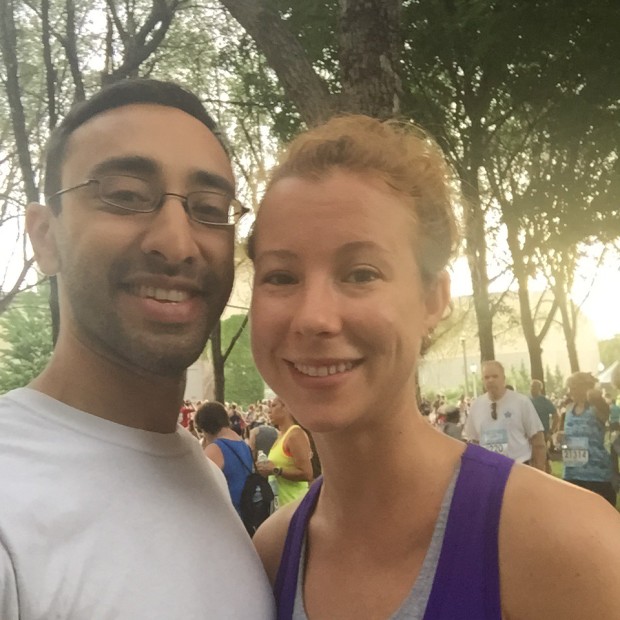 I also knew my friend Lauren was running the race, so I found her and we took pictures! 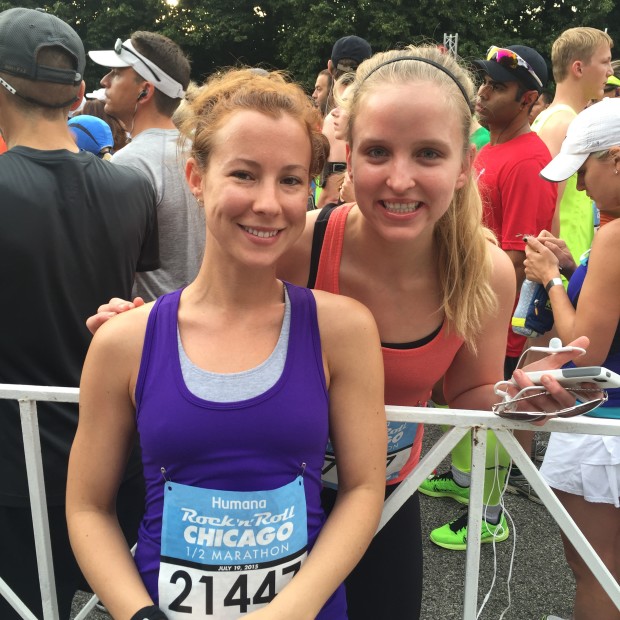 The race started at 6:30 am, but because of the corral I was in, I didn’t technically start running until around 7 am. The course took us all through the city which I really liked. 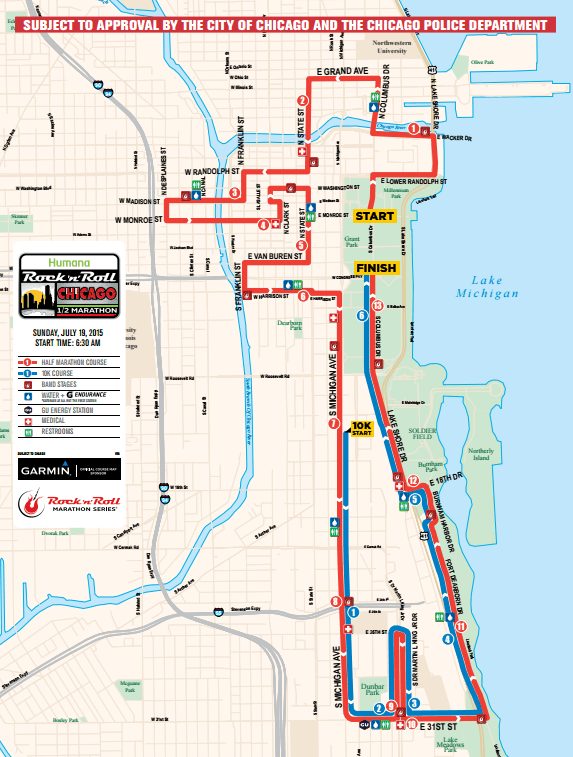 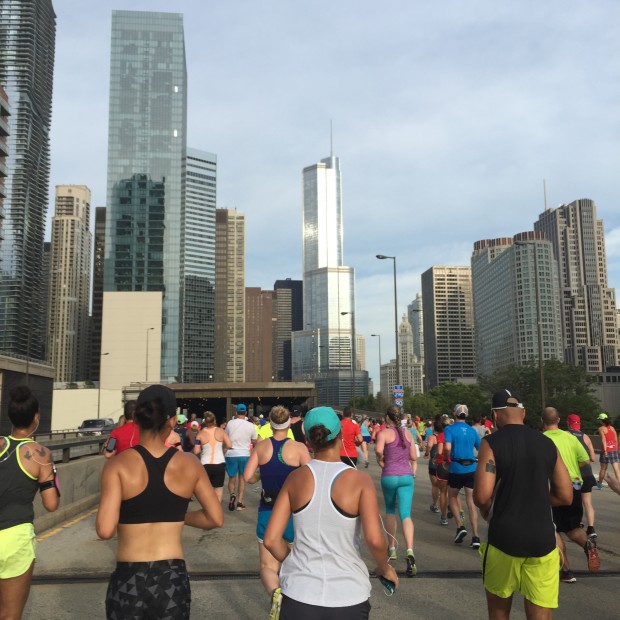 Running through my hood. This was a little past mile 1 and you can already see that some people were walking. 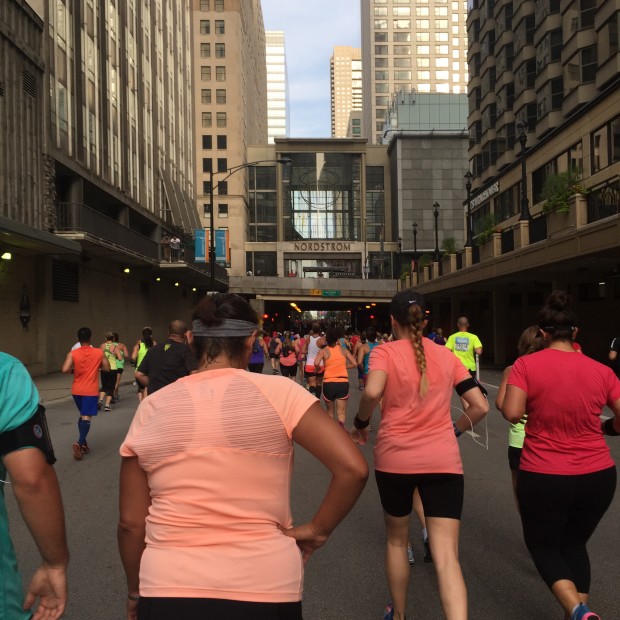 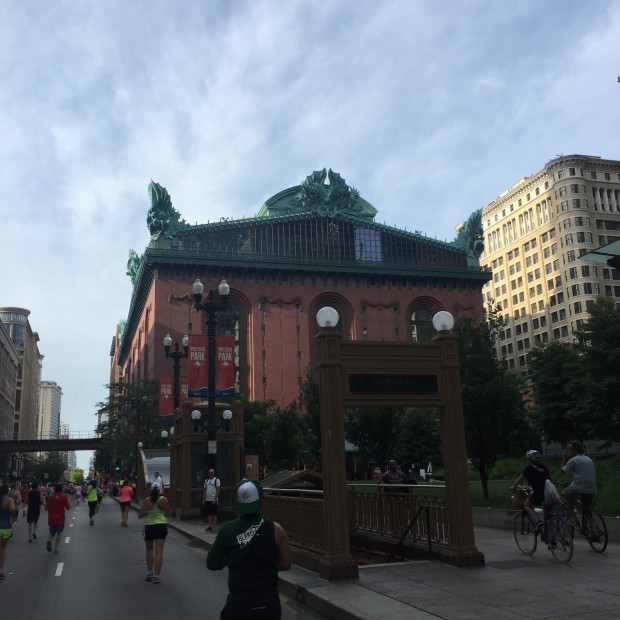 As I mentioned before, there was a heat advisory the day of the race. The humidity was also pretty rough and a lot of people had a pretty miserable race. Things like this definitely helped: 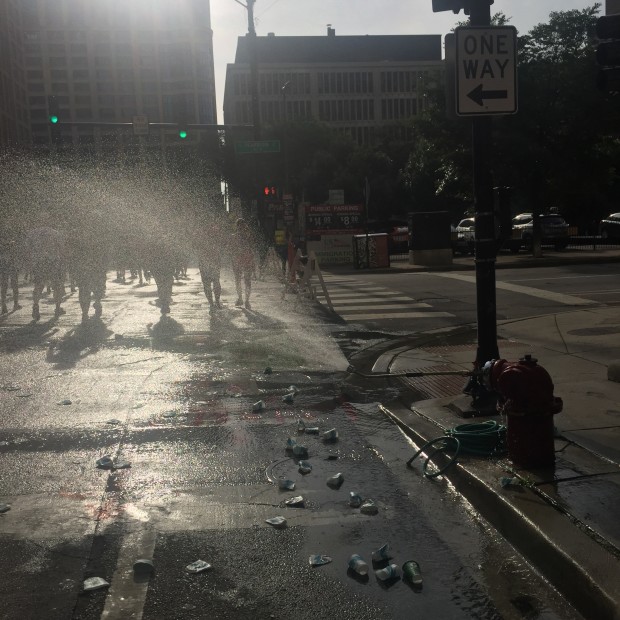 Around mile 7 I saw this and it was like a beautiful desert oasis (note: I originally typed ‘dessert’ because, well, that’s my brain). I will have to go there to make sure that waffles do exist and I wasn’t hallucinating. 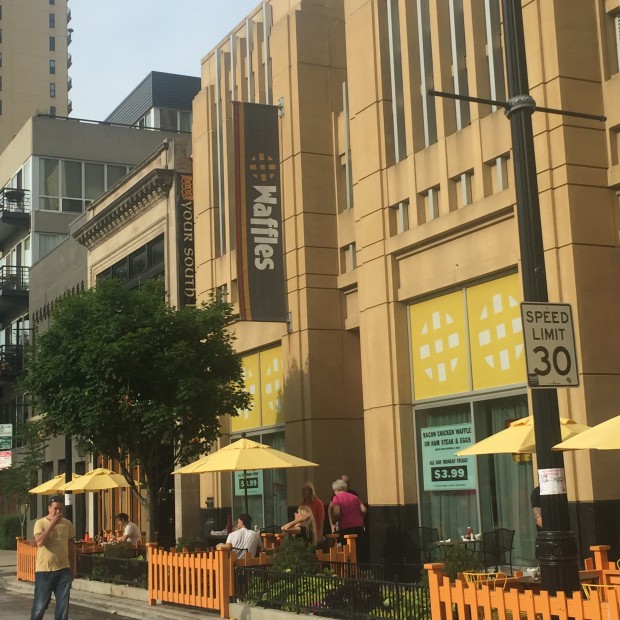 As I mentioned in my post last week, Humana had set up a virtual Cheer Squad where people were able to leave encouraging messages to runners as they came up on the last mile of the race. The messages were linked to a runner’s bib number, so as they crossed the tracking line, their messages would come up. I was surprised by how many of you lovely people left me messages and motivations to keep me going. THANK YOU!

The pictures didn’t come out well, but all of the messages were amazing. 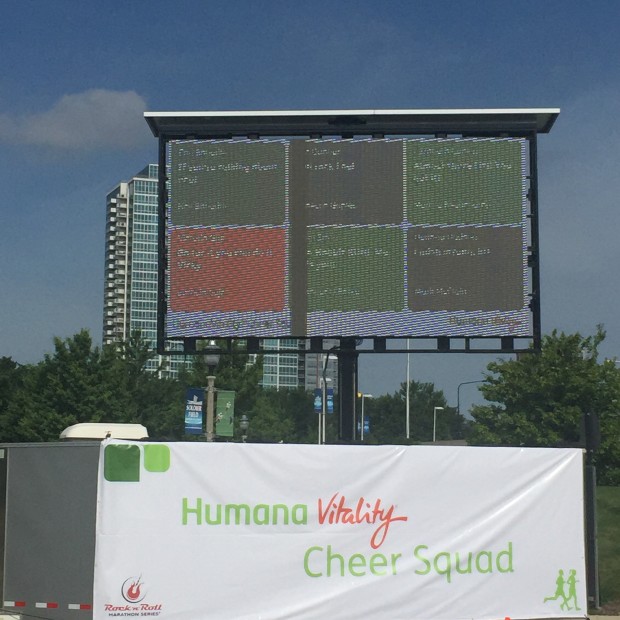 Humana also provided us sweet sweet relief by having misting tents to run through and sponges to help us from spontaneously combusting. 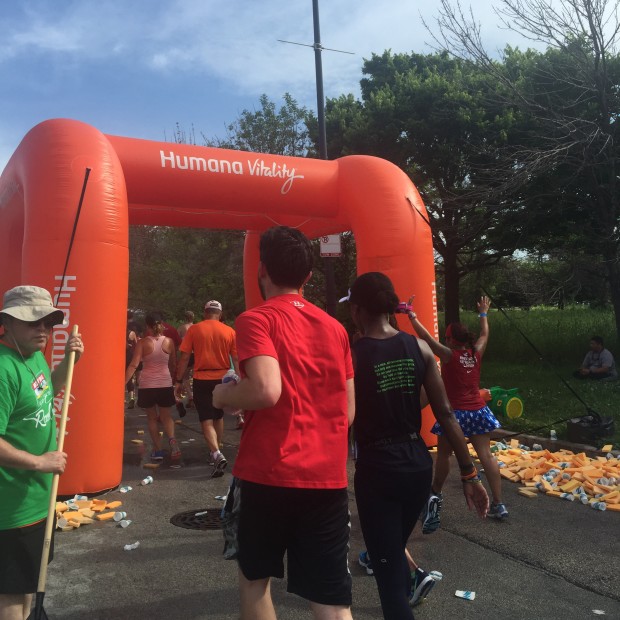 Running (or walking) past Soldier Field 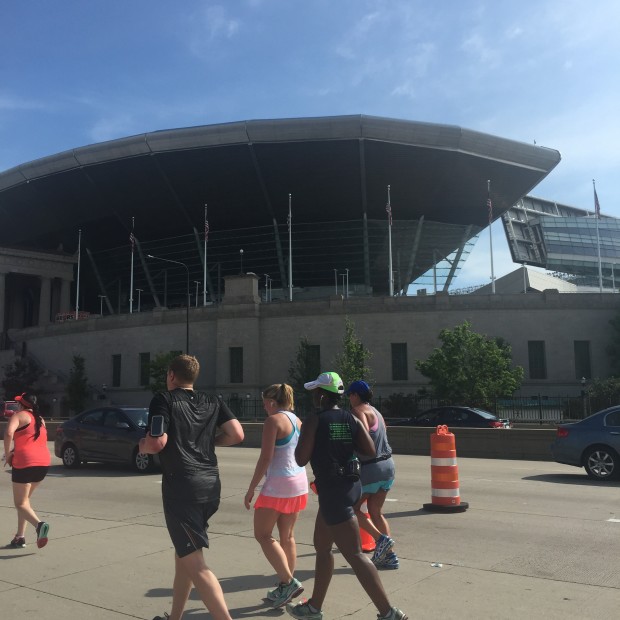 Finally the last mile was within reach and I started to pick up the pace. 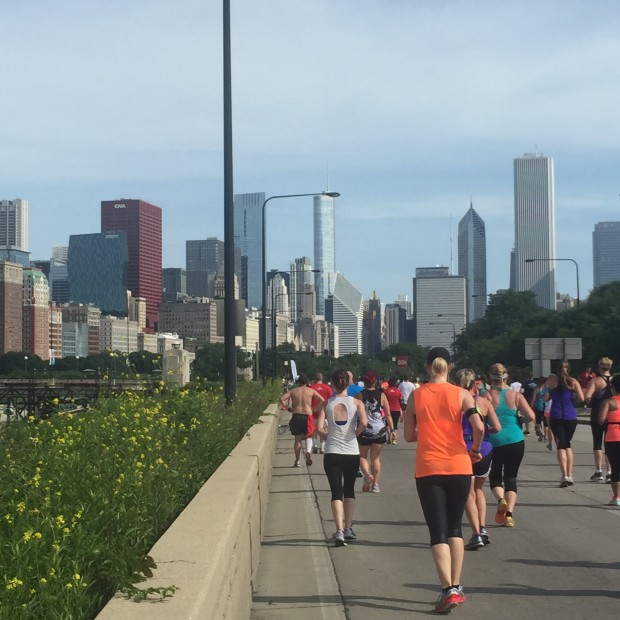 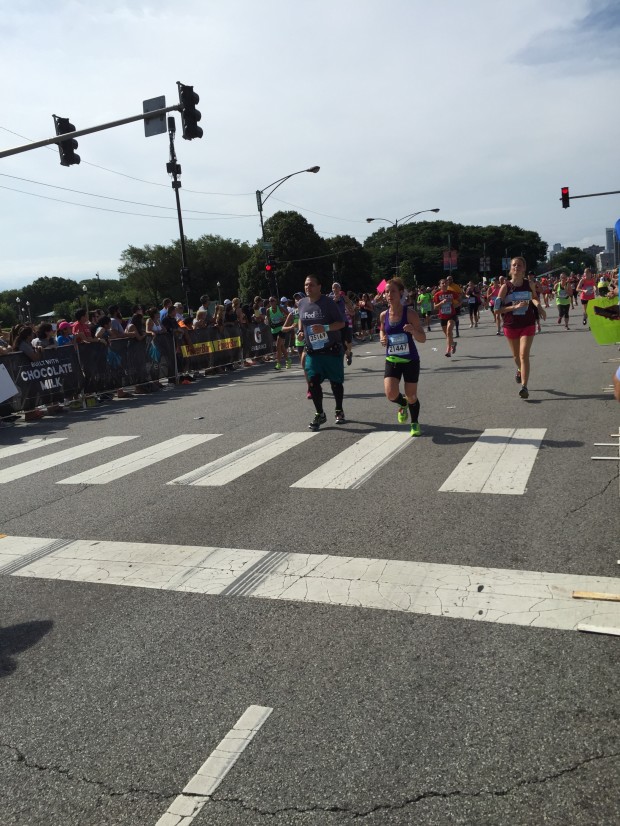 On top of the virtual Cheer Squad, Humana had a group of volunteers who helped line the last mile of the race to offer in-person motivation and encouragement. It’s much harder to stop and walk when people are actually watching you and pushing you to do your best. 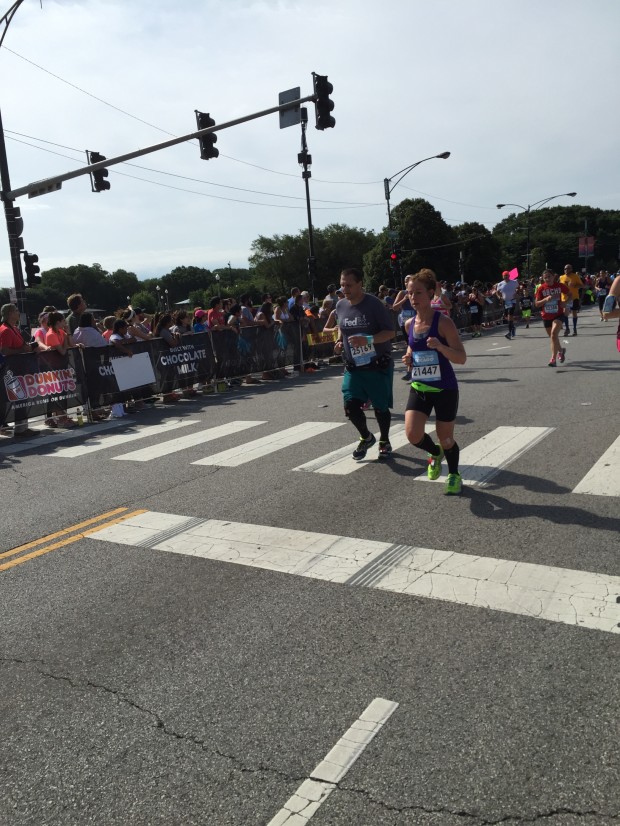 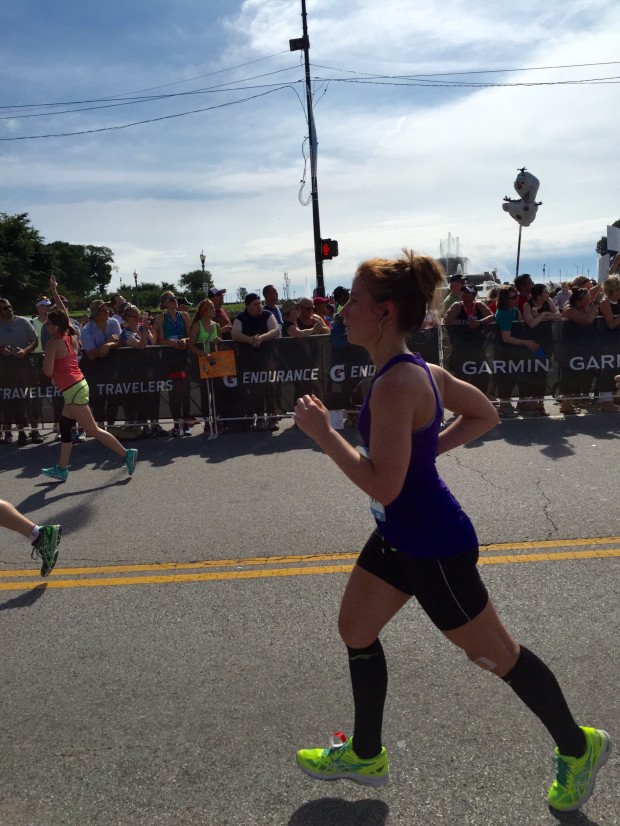 I ended up finishing in 2:38:27 which is approximately 30 MINUTES slower than my time in May. Given that it was 21657487 degrees and I hadn’t trained, I’m just glad that I didn’t have to be carried away on a stretcher like some of the people that I saw.

What I liked about the race was Humana’s #RockYourHealth campaign. It felt better to have a company in the healthcare field sponsor the race as opposed to an alcohol company like the one in May. Their message is that you don’t have to be an uber athlete to #RockYourHealth, it’s just about making simple, positive changes to improve. #RockYourHealth is also about encouraging others, as we know how contagious positivity can be!

I’ve learned a lot during my own personal health journey and one of those things is to go easy on myself (disregard me putting myself through 13.1 miles with no training). When I say go easy on myself, I mean to be forgiving if I miss a workout or if I end up with a race time 30 minutes slower than my last one. The point is that I got out there and I did the best I could. I was active.

I’ve talked about running the Chicago Half Marathon in September, but haven’t committed. It would allow me to complete the Chicago Half Marathon Race Series and I think it would give me a chance to actually try and train for a race since the last two involved half-hearted attempts (or none at all). The point is about setting goals and working towards a new accomplishment, so I think I will aim to run it in a couple months.

Overall, I enjoyed the race and I liked Humana’s emphasis on improving your health in any way you can, even if it’s one small change today. I definitely agree with their message that when we make healthy things fun and fun things healthy, like the Rock ‘n’ Roll Half Marathon, wellness can inspire more people to get up, get out, and get active.

How are you going to #RockYourHealth today? Whatever you do, take an epic picture and tag me on Instagram so I can be part of YOUR cheer squad! 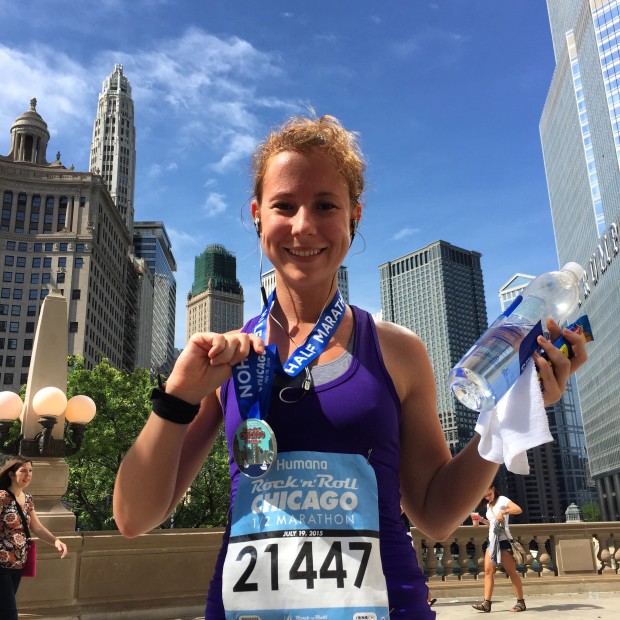 This post is sponsored by FitFluential on behalf of Humana.