I don’t know about anyone else, but I have a love-hate relationship with running. Looking at a year, my fitness routine has generally followed the same pattern. When the weather is warm (or mildly cool), I run. When it is cold (think winter), I strength train. That has been my pattern for a number of years until this one. I moved to Chicago where it was cold a LOT, I discovered my love of HIIT workouts PLUS heavy weights, and running hid somewhere in the corner.

Fully expecting to be excited about running again, I signed up for the Chicago Spring Half Marathon, only to find that I was lacking the motivation to train. I ran sporadically, but finished with a decent time. I had a last minute opportunity to cover the Rock ‘N’ Roll Half in the middle of July, so of course I signed up and found out just how miserable it is to run in the middle of summer with no preparation.

I had been contemplating whether or not to run a third one this fall when I won an entry to the Magnificent Mile Women’s Half Marathon from Luna Bar. COME ON. I’m not complaining about a free race entry, just the fact that I can’t seem to escape them. I think maybe the cosmos is trying to tell me something. When I found out I had won the entry, I realized that it was a month away and if I actually trained for the race it may be more enjoyable.

The next day I hopped on a treadmill and ran a quick 3 miles. I felt optimistic about running again since I had taken such an extended break, but I was afraid I may still be in my hate stage. If I am ever in one of those running lulls, it is crucial that I have the absolute best music. Thankfully I remembered the Spotify running feature and decided to give it a try.

I mentioned this briefly on Friday, but so far I LOVE it and I have been running a number of times since then (on a treadmill no less!). For the time being, this feature is only available on iOS, but is coming to Android as well (it is currently in beta testing).

The Spotify running feature detects your running pace and then plays music that matches that pace from a playlist of your choice. 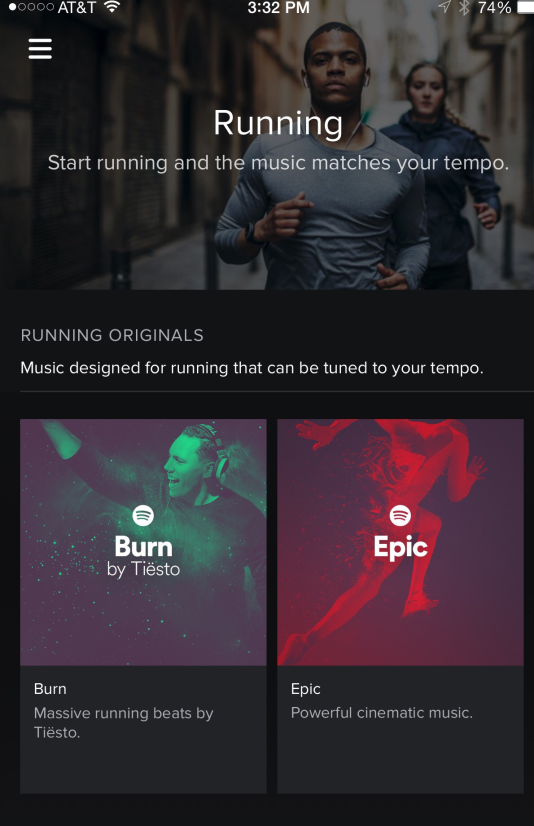 You can choose from 6 “Spotify Originals” which are all instrumental or electronic beats:

Running has really helped my mood and focus recently, so to do that I have been listening to Burn, Epic, and The Chase. I need to get amped up and motivated to keep pushing through, but that’s just me. Maybe when I am a little calmer I can rock out to some Seasons.

The first two times I used this I didnt scroll down and see that there were even more playlists of songs with words. Derp. 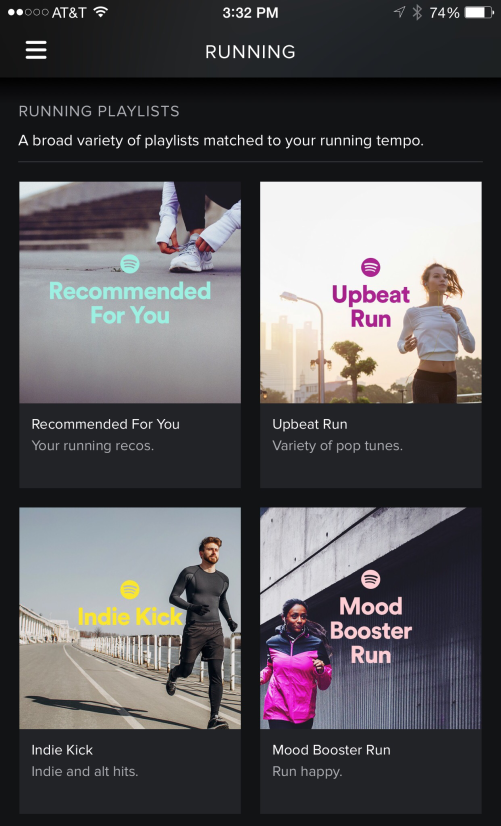 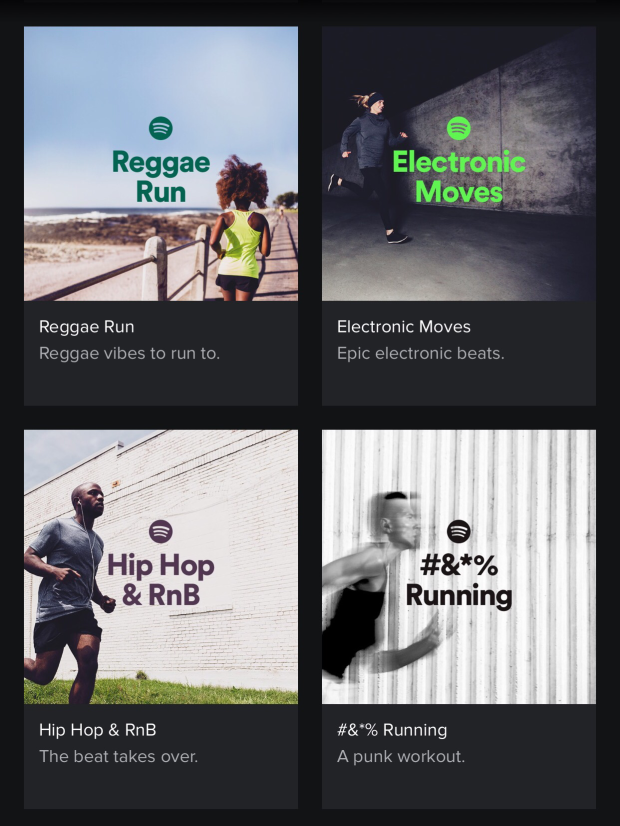 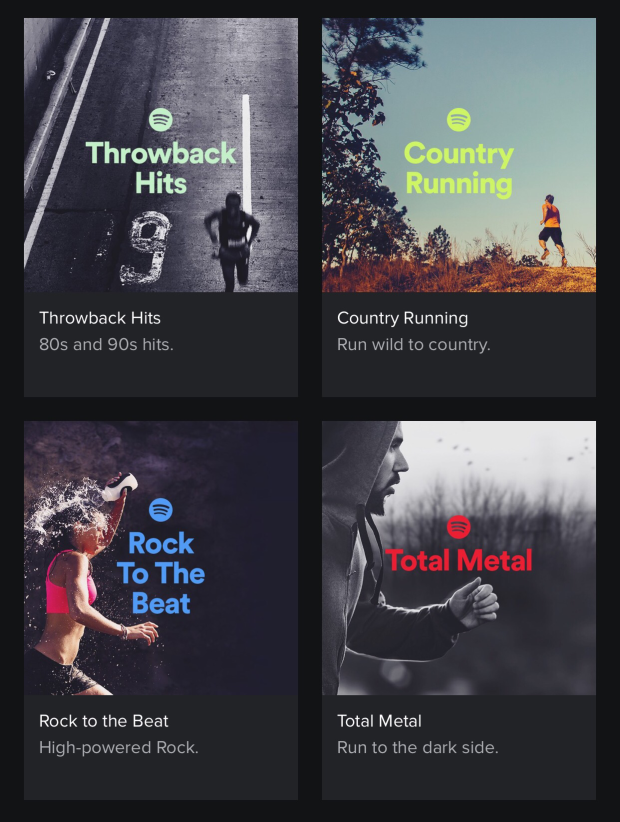 As you can see, there is a genre for everyone. Depending on what mood I am in each day, I can pick a different one. Simply choose your playlist and start running. Spotify will sense your pace and play music that matches your tempo. 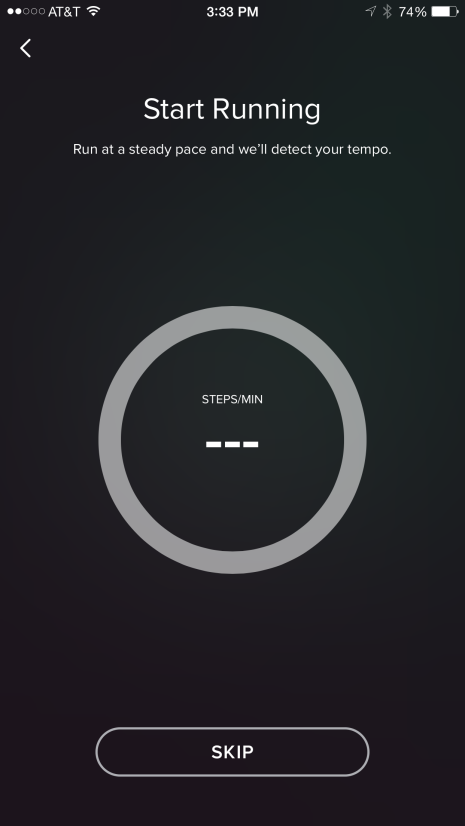 Note: You have to hold the phone in your hand when you start running because it gets your pace from the swinging of your arms. When I first tried it, I was holding it while running on the treadmill, but I was also staring at the screen which meant my arms weren’t swinging. Then I thought THIS IS BROKEN. Then I used my brain.

Once Spotify has your pace, the music will stay at that pace for the duration of your run. This is a good feature for those who have trouble pacing themselves when not running on a treadmill. This is an annoying feature for those people who may be not be doing a run at the same pace the entire time. If you are doing speedwork or a tempo run, for instance, your pace is not going to remain constant the entire time.

The good news is that you have the option to manually change the tempo to speed up or slow down the music. There are arrows next to your steps/min that allow you to increase or decrease your speed. No, I do not run that fast, but this chase music really sounds epic when I have it set that high. 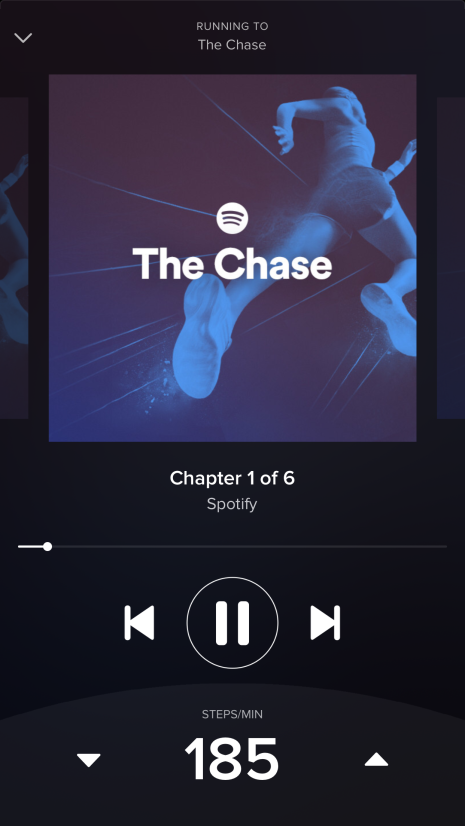 If you already know how many steps/min you want, you can also skip the sensor part by hitting “skip” at the bottom of the screen.

Big thanks to Bethany who informed me that the Nike+ Running app has also integrated with Spotify in a recent update. According to Nike, “the update introduces Nike exclusive Pace Stations, which invite users to input their pace goal and musical preference. This data then informs a target BPM (beats per minute), which in turn creates a personalized 100-song playlist designed to push the runner’s pace. The first-of-its-kind instructive experience then guides runners to their goals when they step in-beat to the prescribed songs.”

Spotify’s running feature has really upped my running game and last night I even braved the heat and humidity to run 5 miles around the city. Now you know it’s a good thing if it can get you out in the heat.

See how the @spotify running feature can help you love #running again!

8 comments on “Learn To Love Running Again With Spotify Running”