You guys — these past six days were AWESOME. I want to share it all with you, but that would make for one HUGE post, so I’m going to do it in two parts. Today’s post is a recap of our trip to Yosemite and I’ll recap our time in San Francisco in the second.

We flew into San Fran last Tuesday. From there, we picked up our rental car and drove the 4 hours east to Yosemite National Park.

The drive in was beautiful and peaceful. As a side note, there is a $30 entrance fee just to enter the park.

Prior to our arriving, we had booked three nights in Yosemite’s Housekeeping Camp, located right along the Merced River. We booked through Trip Advisor, which resulted in a nightly rate that was about $10 less than if you show up and book at the site. 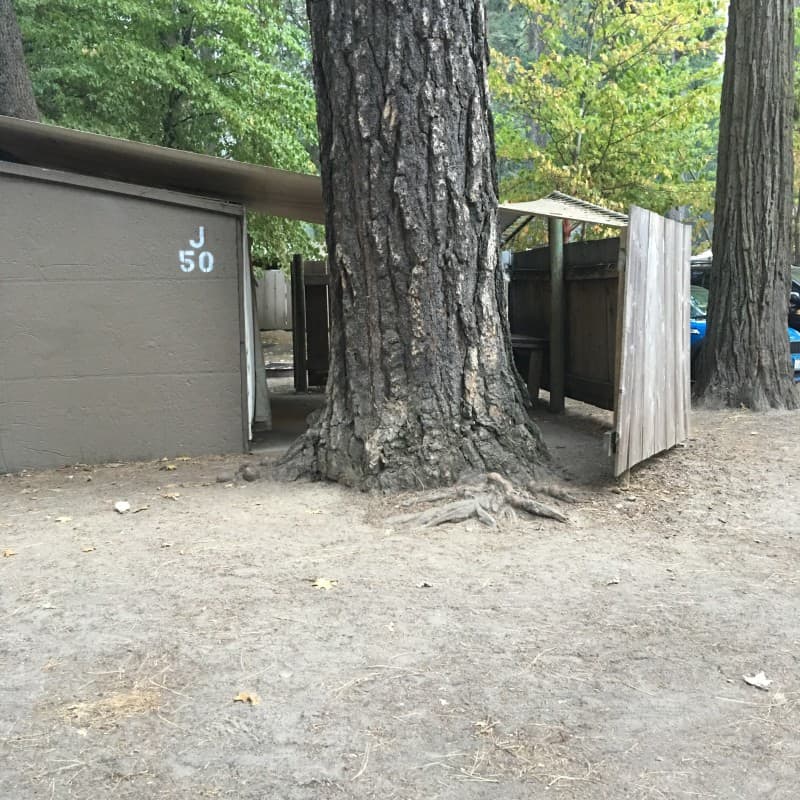 There are tons of lodging options in Yosemite, ranging from bare bones camping to impressive lodges. Housekeeping Camp was about a step up from basic camping and consisted of a structure with three concrete walls, a flap to close at night, and a semi-private area with a fenced-in table. There is also a full-sized bed and a set of bunk beds in case several people want to camp out.

Outside the fence is a giant metal “bear box” where you are required to lock up any food, toiletries, or anything that a bear may mistake as food. If a bear breaks into your car, you will be fined $5,000. Yosemite don’t play. 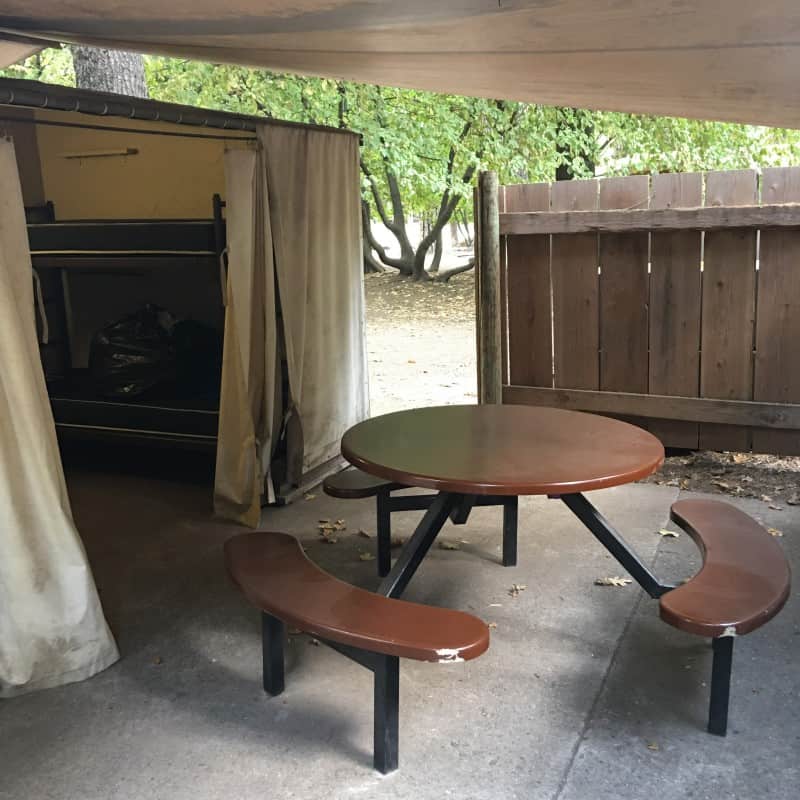 There was one outlet and one light, which was nice and allowed us to not only rely on our phone flashlights in the evening. We rented a full bed set for $2.50 a night, which included sheets, pillows, and two heavy blankets since temperatures drop at night.

There were also localized bathrooms with sinks and toilets which were maintained really well. There were also showers, but we didn’t stay long enough to use them. 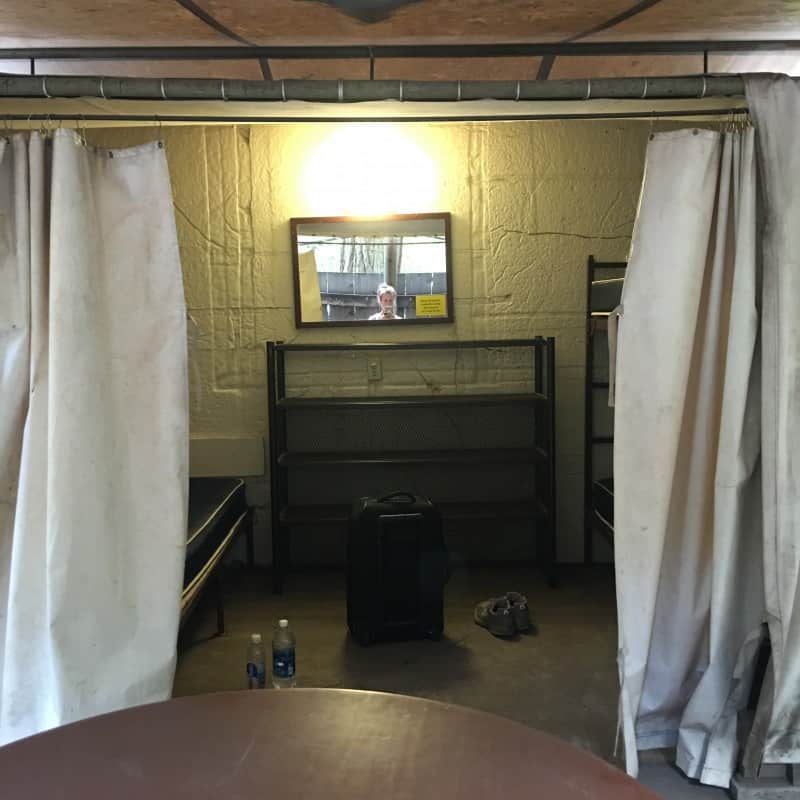 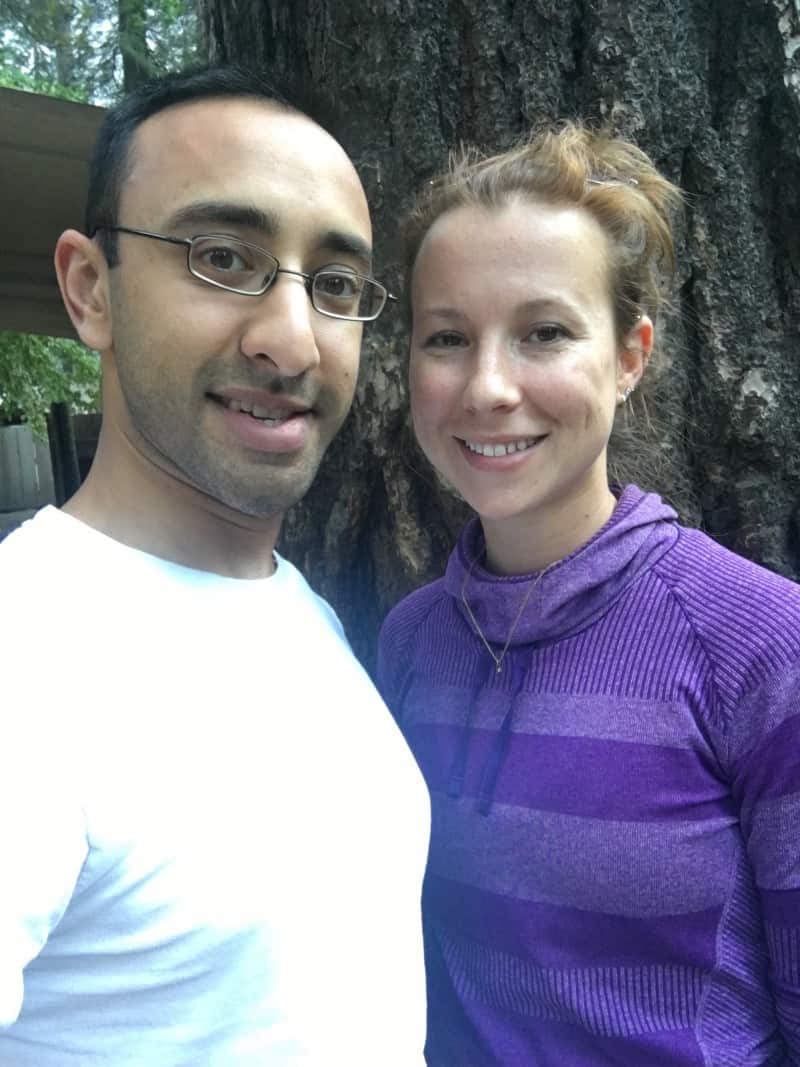 These are some shots of the Merced River from outside our camp. So beautiful. 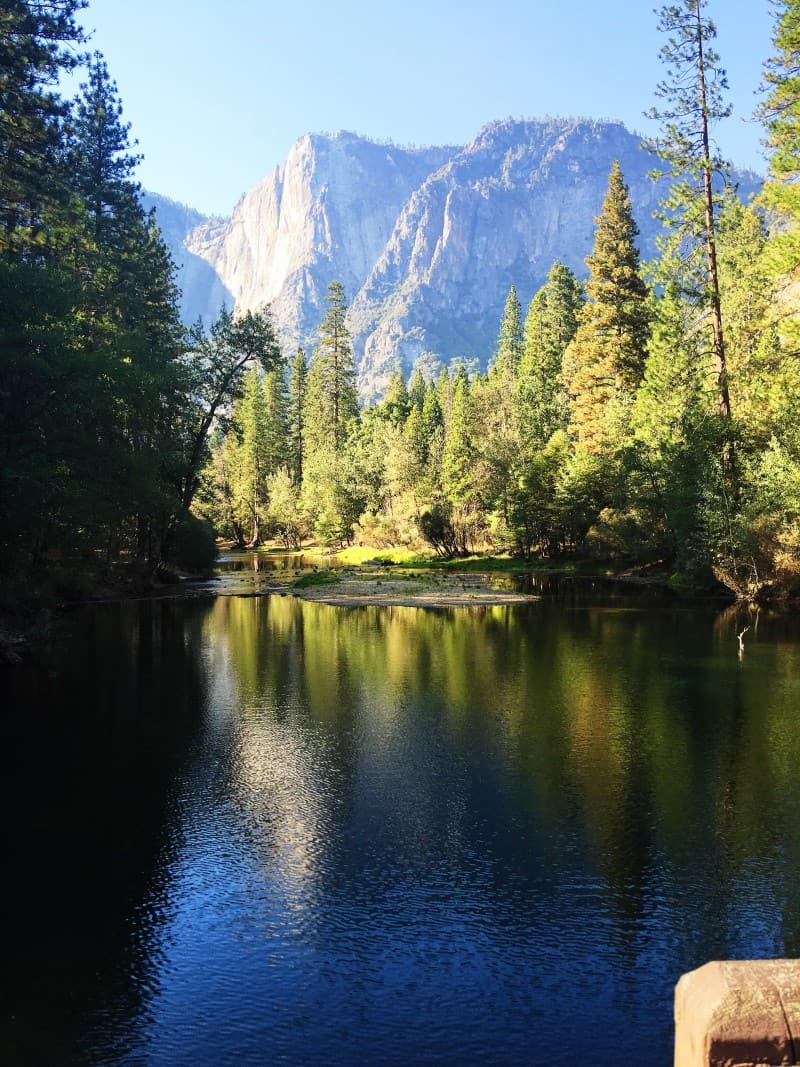 Since we had spent a good 8 hours traveling already, we settled in, walked to find some food (THEY HAD BOOCH!), and had an early night. 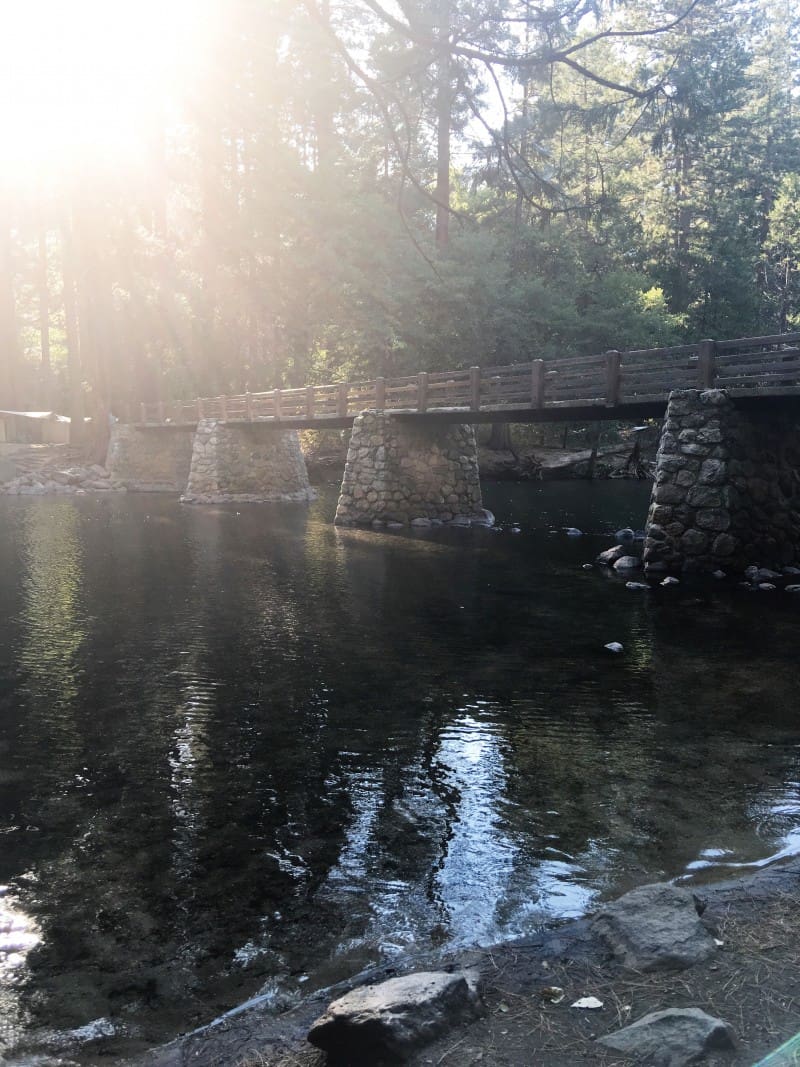 We made a stop at registration to ask their opinion on which hikes to do. Several of the falls had already dried up for the year, so I’m glad we asked their advice. We had two trails in mind, but were told that we could do them all in one on an EPIC hike. It didn’t really make sense to split them up, so we nervously agreed to tackle 14 miles the next morning.

We woke up at 6 am since we went to bed early the night before and wanted to avoid being stuck in the heat in the middle of the day. Also an interesting side note — the weather apps said that it would be in the 60s during the day and 30s/40s at night, but when we arrived, the daytime temperatures were forecasted in the 80s and the evenings in the 50s. Neil had to buy their only pair of shorts (3 sizes too big), and thankfully I had packed some cooler clothes.

I packed a TON of snacks and we actually went through them all — plus some. I had a bunch of those CLIF oatmeal packs, squeezeable fruits packs, and protein bars. We even stopped to grab a couple more at Glacier Point. Make sure to pack enough fuel!

We started a little before 7 am since the sun didn’t rise until then. We brought one bag filled with snacks and plenty of water, then walked about about a mile from the camp to the start of the first part of our journey — Four Mile Trail. 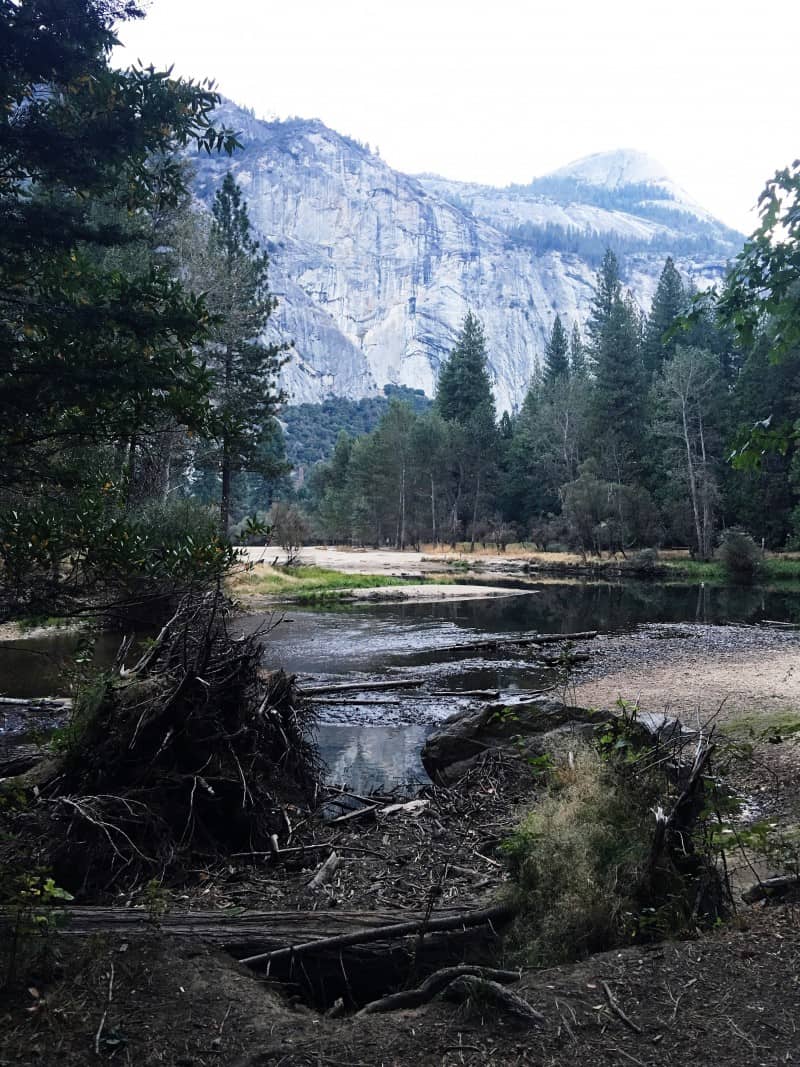 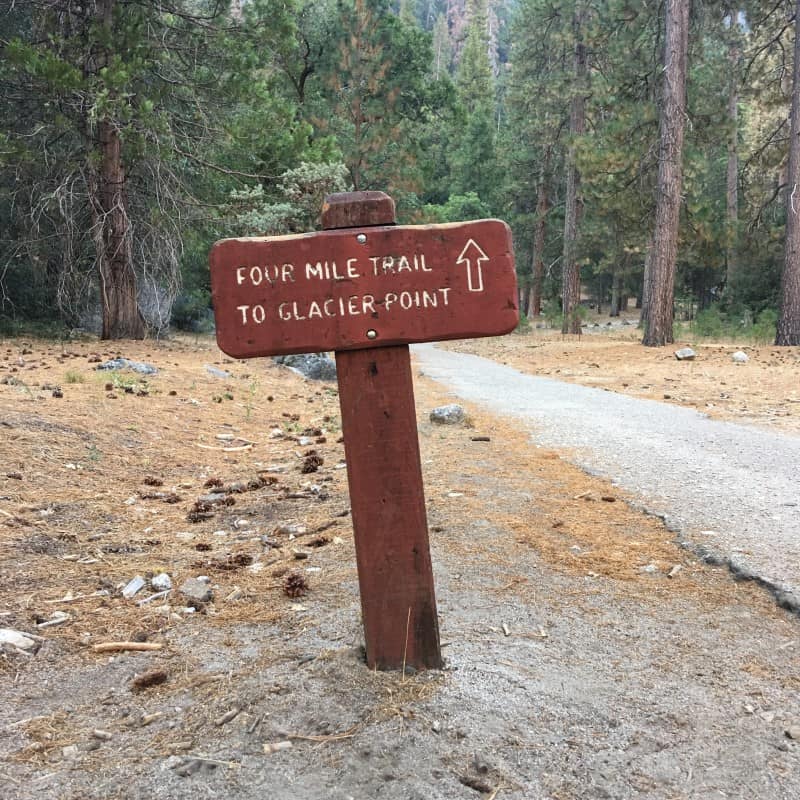 Four Mile Trail is actually 4.8 miles with an elevation gain of 3200 feet. This is a picture of the climb we were about to embark on, but I’ve realized in looking at these pictures that the enormity of these structures really doesn’t translate. I wish I could bring you all there with me. We started this part of our hike at 7:30 am. 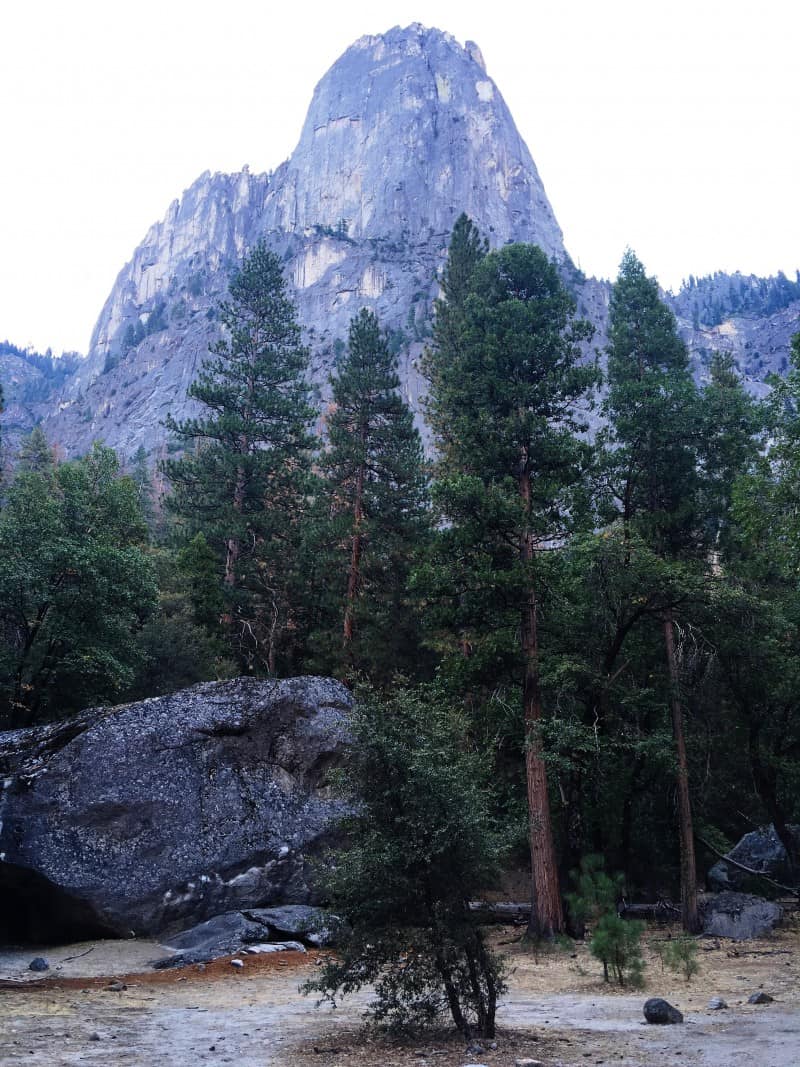 This is the first part of the hike as we climbed. It was pretty rocky, but the sun wasn’t yet a problem and we had a lot of shade from the trees. I loved it. 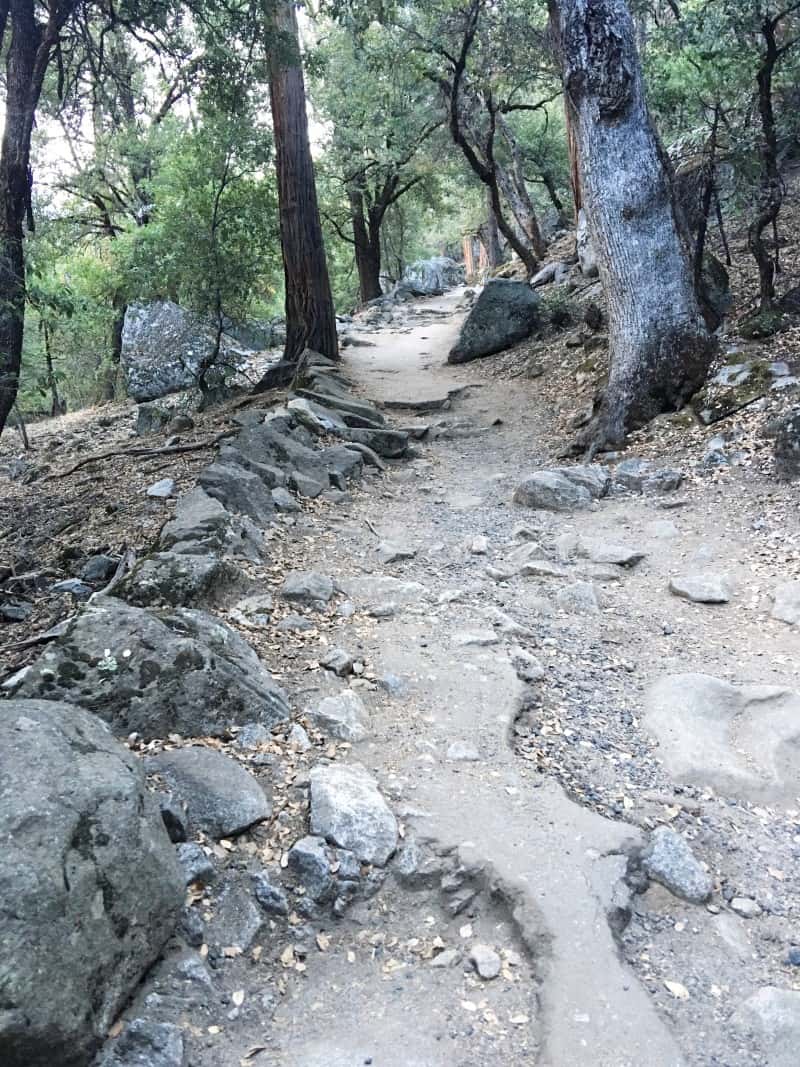 I took about a million pictures, but I’m just sharing some of the best ones with you. The trail ends at Glacier Point, which allows you some of the best panoramic views of the park. Half Dome is off to the right, which you can see in the next picture. 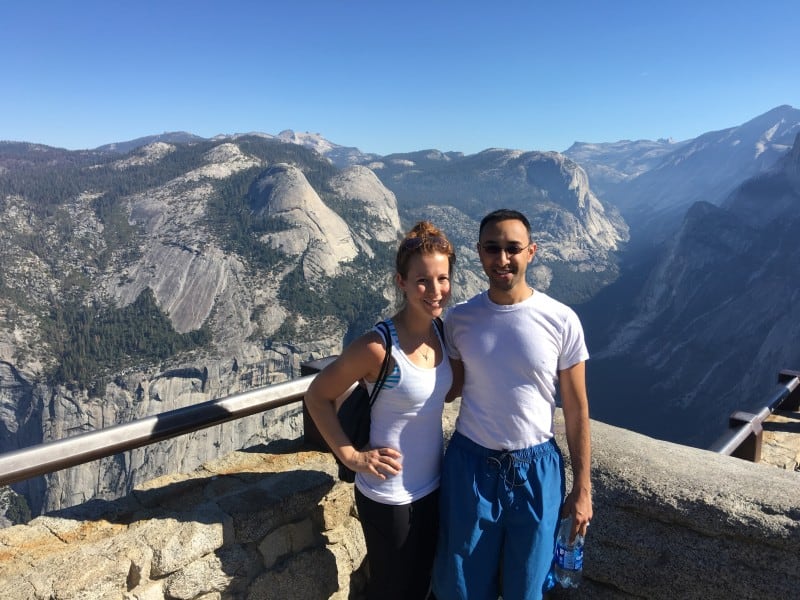 If you don’t want to tackle this strenuous hike, you have the option to drive to Glacier Point to simply check out the views. It took us 3 hours to get to this point.

After taking a quick break to refuel and rehydrate (there is a water fountain at the top to refill bottles), we set off on the Panorama Trail to descend the mountain. I was excited because there were two waterfalls that we would encounter on our descent. The Panorama Trail is 8.5 miles and can take anywhere from 4.5-7 hours to complete.

Here is a view of Half Dome from the Panorama Trail. To hike Half Dome you need a permit and the hike can take anywhere from 10-14 hours. We just weren’t about that life this time. 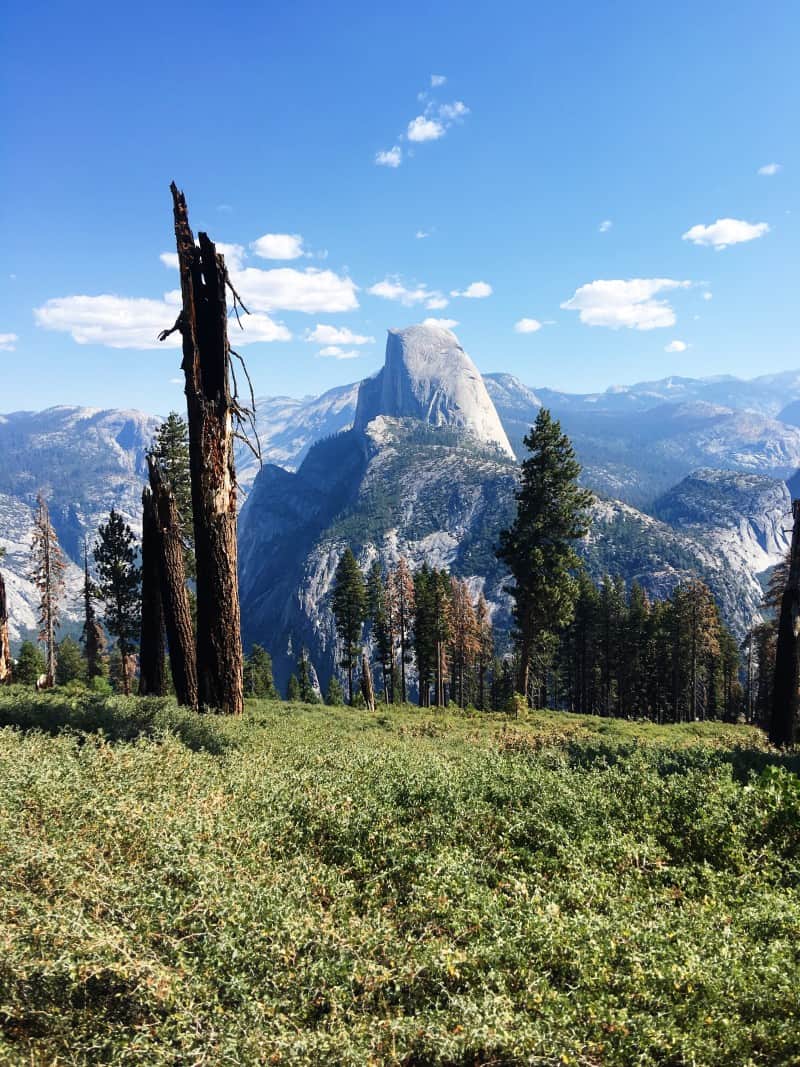 I loved this rock which is right next to Half Dome. I should probably find out what it’s called. 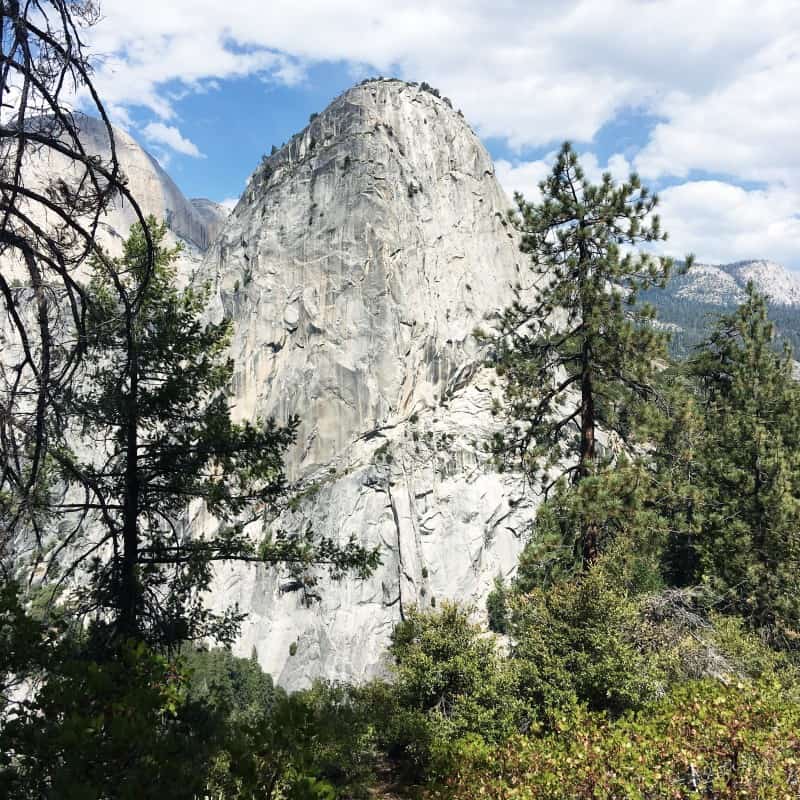 The first water we came to was Illilouette Falls. I love water. I love it so much, so I could have spent forever here. I went off the trail so that I could play in it and explore. It was amazing. 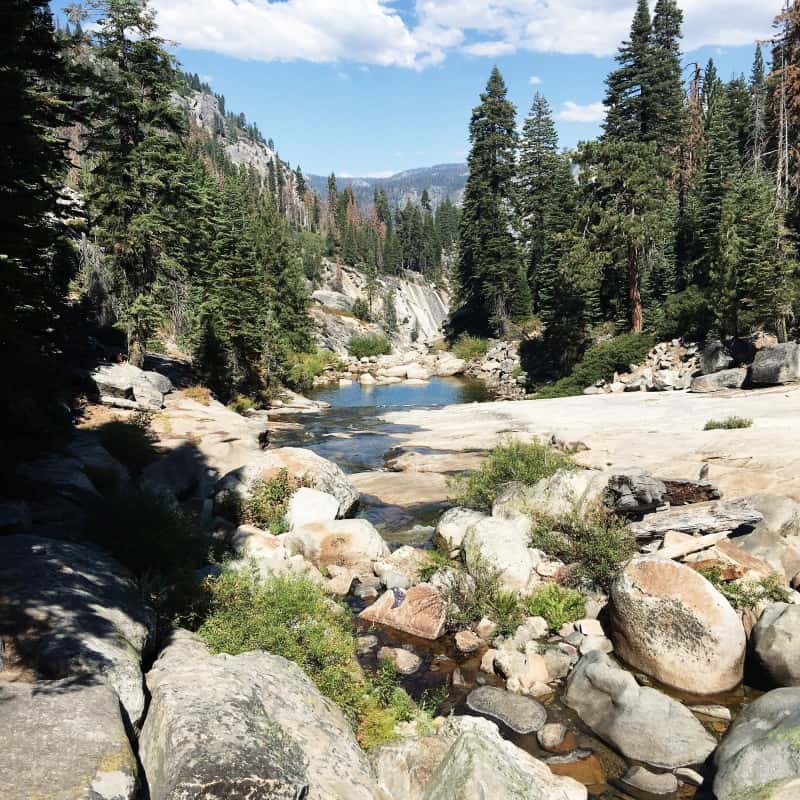 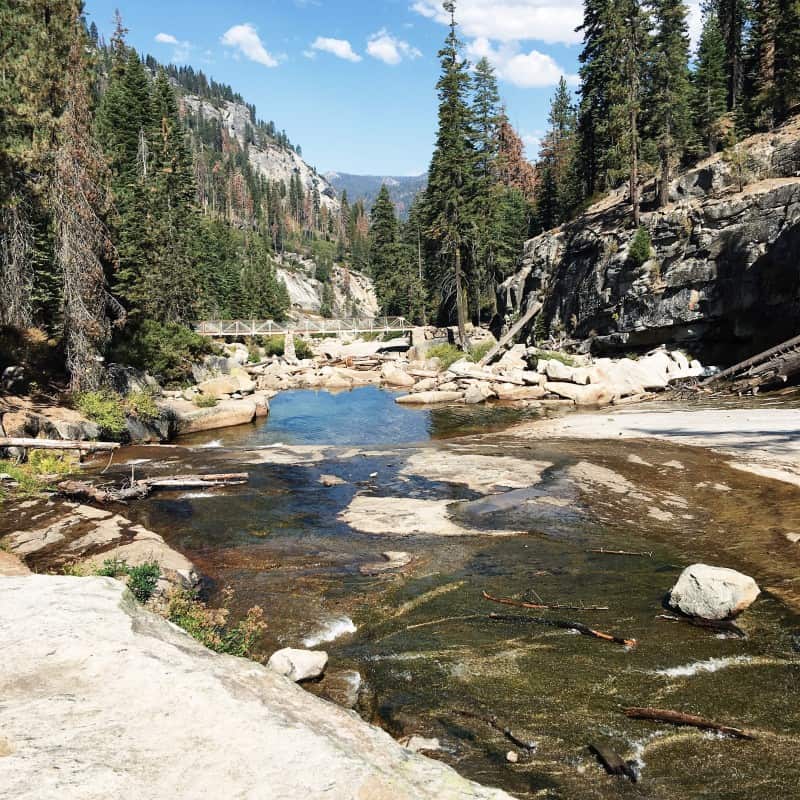 We had assumed that the trail would be all downhill, but heads up — it’s not. It goes downhill for a good period of time, then climbs up again before the final descent. By this time the sun was out, the elevation was high, and we needed to stop a couple times to regain our bearings. One of us doesn’t like the heat. 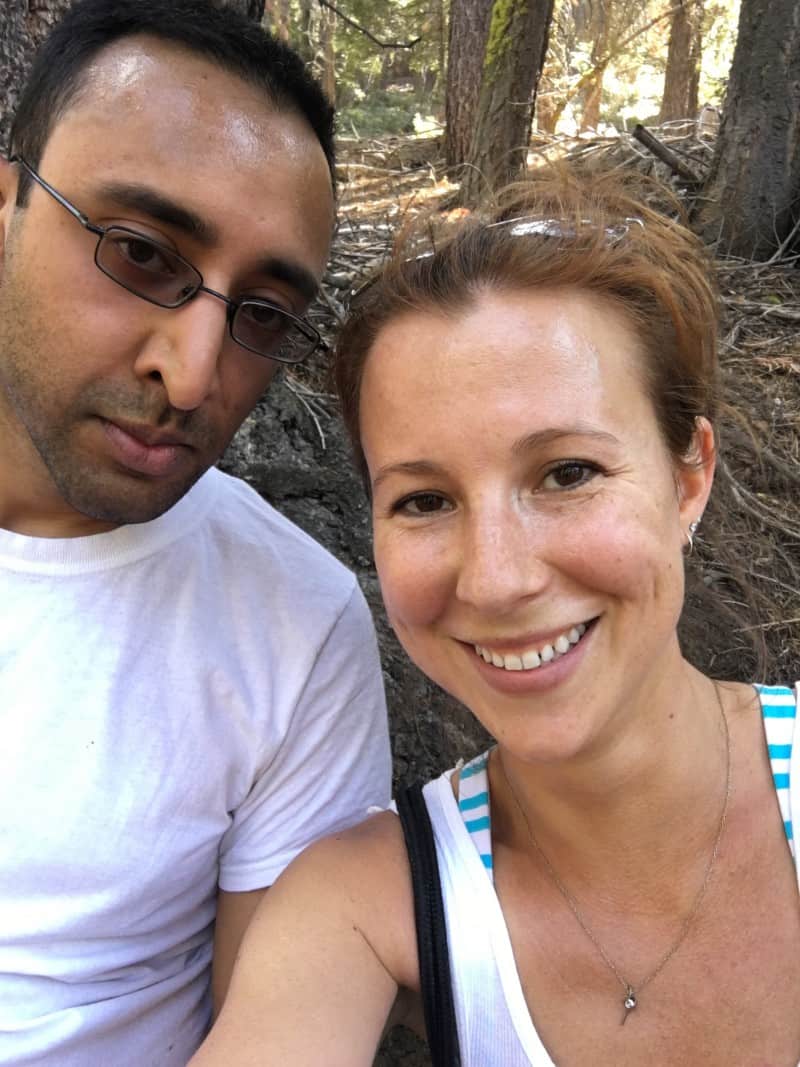 Our second water stop was Vernal Falls, which was also beautiful. There is a large Emerald Pool you can experience as well and many people were camped out enjoying the water and the shade. I was doing handstands by my favorite unnamed rock. 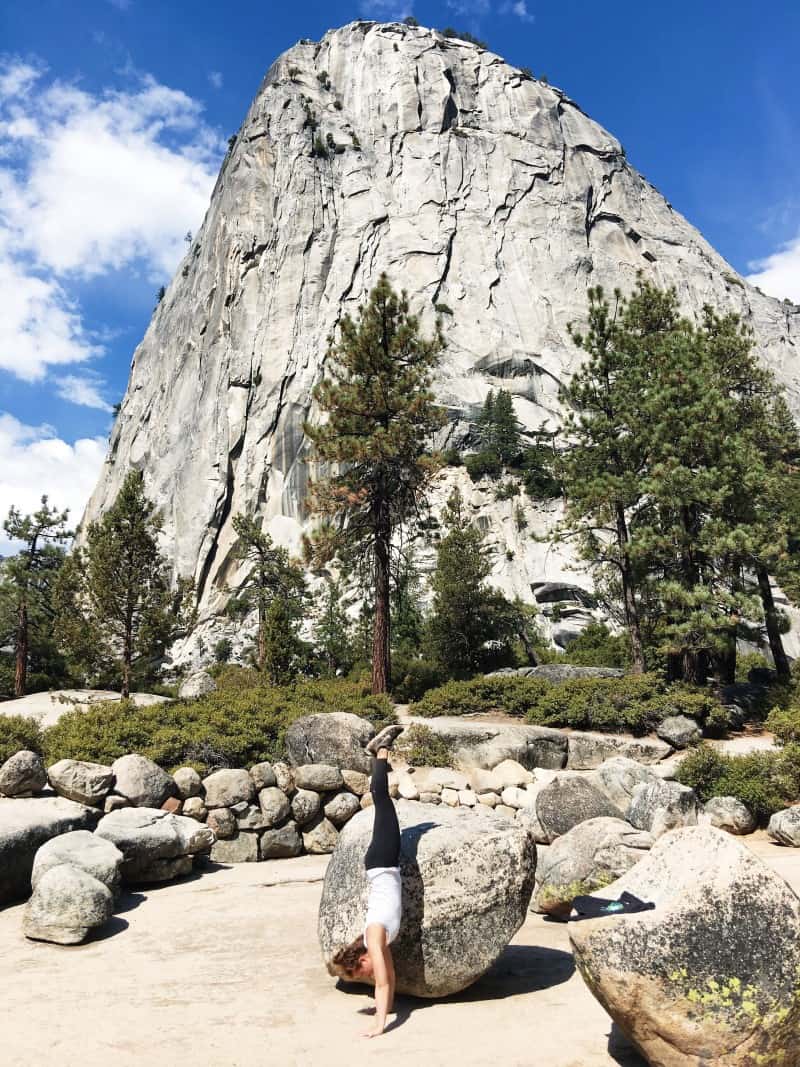 After this point, we chose to continue our descent on the John Muir Trail. There is another one called the Mist Trail, but it was crowded and we weren’t feeling very social 🙂

The rest of the way was downhill, which was a relief. By this point my calves were feeling it and I could feel the start of a blister. I found some more water towards the bottom and it made me HAPPY. 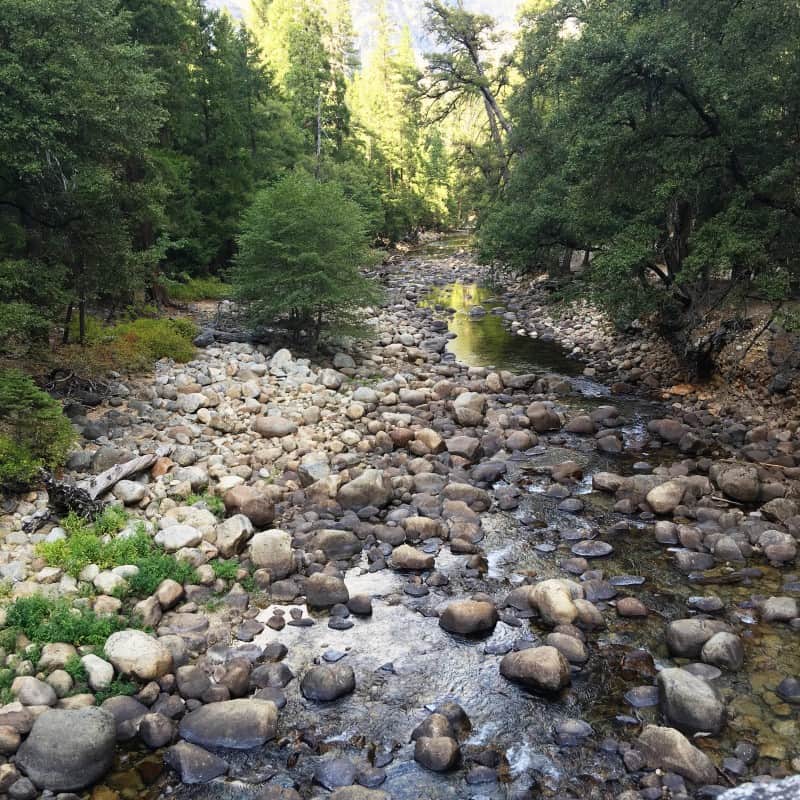 We finally made it to the bottom and then had to walk back to our camp. We arrived back at 4:30 pm, which meant that we had hiked for 8.5 straight hours for a total distance of about 15 miles. Woof.

We had originally planned to stay until early Friday morning, but since we combined our two hikes into one, were filthy, and suspected we would be super sore the next day (we were), we opted to check out early and visit some of Neil’s family in Sacramento before heading to San Fran.

It wasn’t a super long trip, but it’s one that I feel completely content about. While I normally get tired at some point in the day, I was so invigorated by all the beauty and the nature that I finished the hike and then drove 3 more hours to a hotel. Even then, I wasn’t terribly tired. Nature is my happy place.

I’ll be back to recap more of our trip. I would definitely recommend visiting Yosemite if you’ve never been there. It was incredible.