Where to Hike and Eat in Vermont

If you were following along on Instagram, you know that I spent the past few days visiting my sister Jackie in Vermont. She moved there almost a year ago and it was about time I made a trip out there. 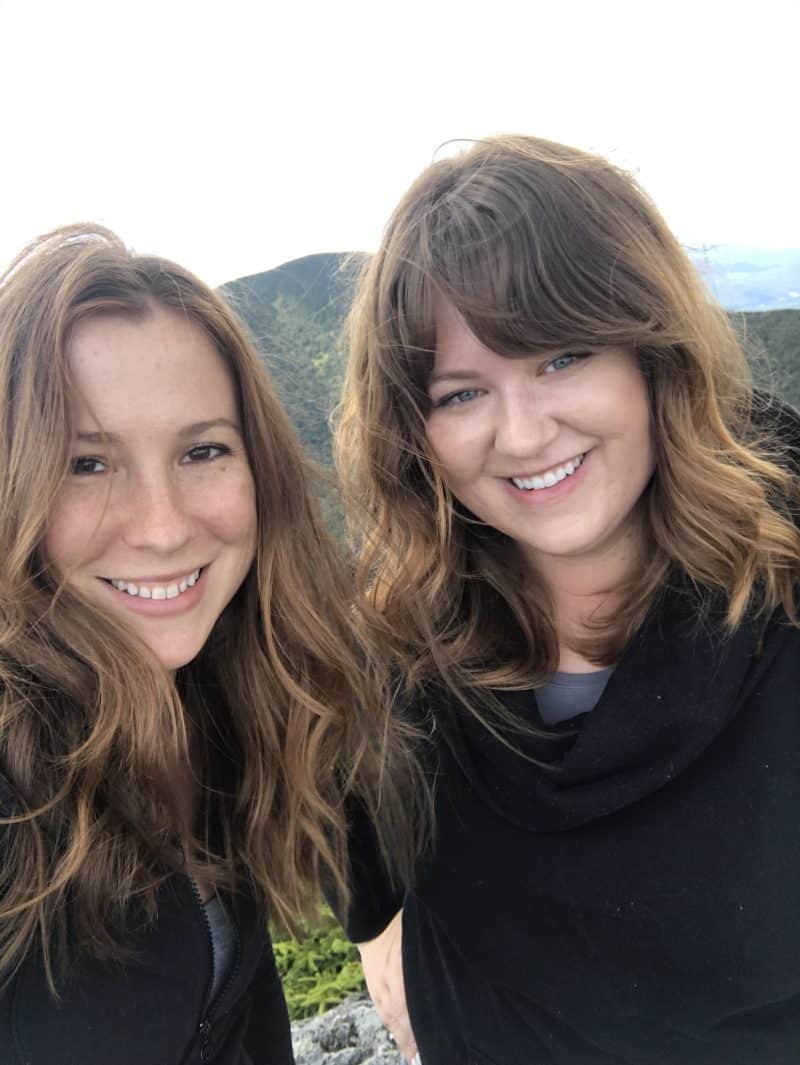 She lives in St. Albans, but we spent a lot of our time traveling between there, Burlington, and Stowe. I put together a travel guide of our hikes and some notable places to eat, but I’m sure that I missed some by only being there a couple days and trying to cover three cities.

Overall, I had a great time. I was able to visit with Pinky, something I hadn’t been able to do in about a year, and get back to nature, another something I haven’t been able to do in awhile. When you grow up surrounded by woods, it can be hard to be away from it for an extended period of time. Don’t get me wrong, I do love Chicago, but I’m always going to have to be within driving distance of some type of nature.

This post is almost 2000 words, so I’m going to get right into an overview of where we hiked and ate while we were there. Enjoy! 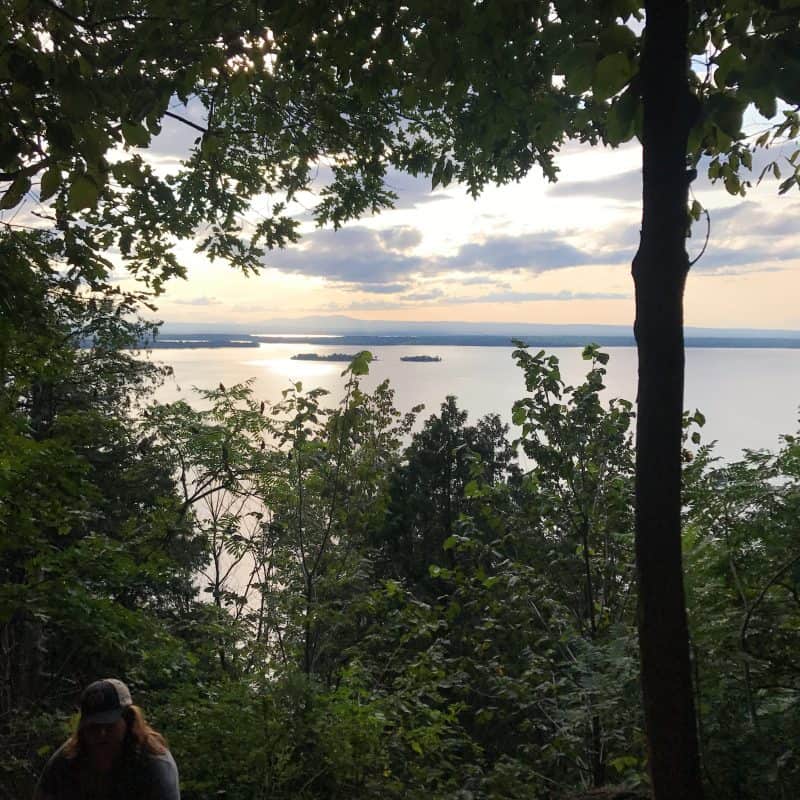 This was the first hike we went on. We headed back from the airport, grabbed her dogs, and drove out to the trailhead. It was only about a mile hike, but I was fine with that after being delayed on my way there and just generally tired from travel.

It was an easy hike that gave us a nice view of the water and then we headed back. 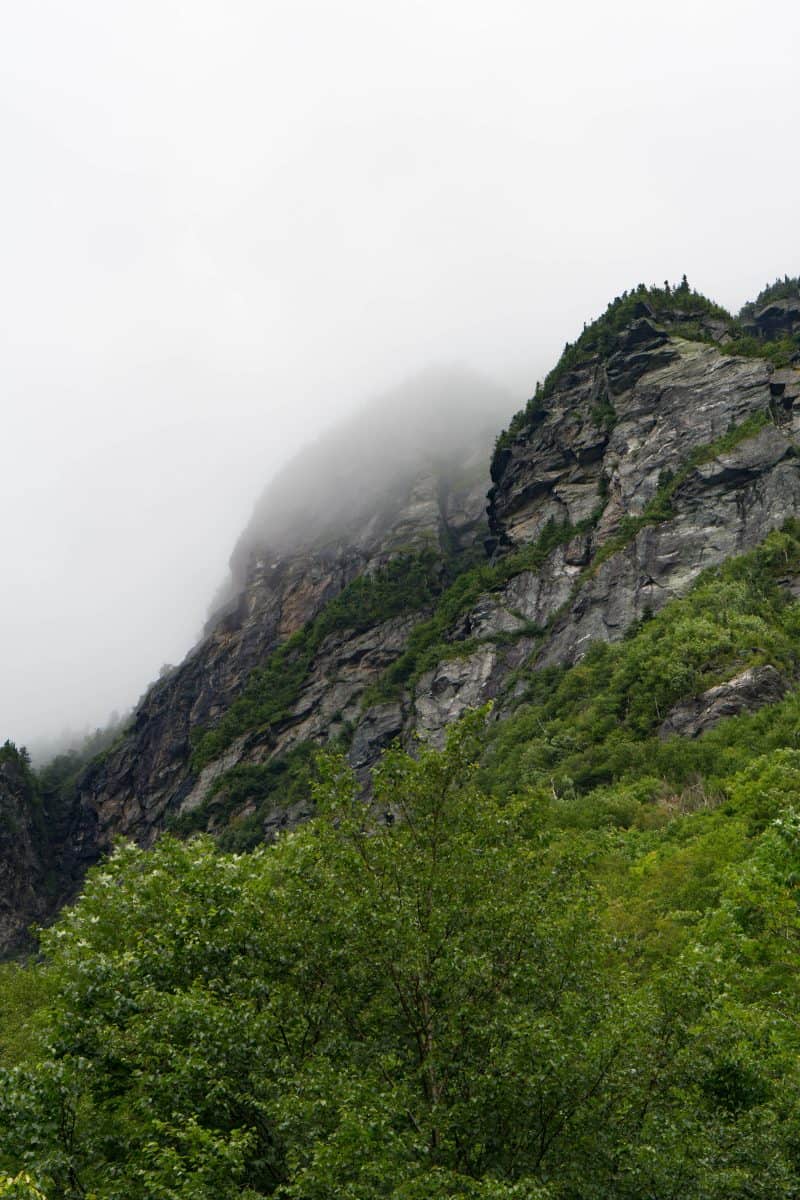 I’m including this one despite not actually being able to get out and do any hiking. Smugglers Notch is a mountain pass that is only open during part of the year. During the winter, conditions make it too dangerous to drive and it’s not open to the public. Year round, no tractor trailers are allowed on the road because they can become stuck and block traffic for other vehicles — which is exactly what happened when we tried to drive through.

We parked along the side and did some brief exploring, but weren’t able to actually travel through the pass, which is supposed to have beautiful scenic views of rock outcroppings and trees, especially in the fall. The history of the pass is pretty interesting and if you’re interested in reading more, click here. 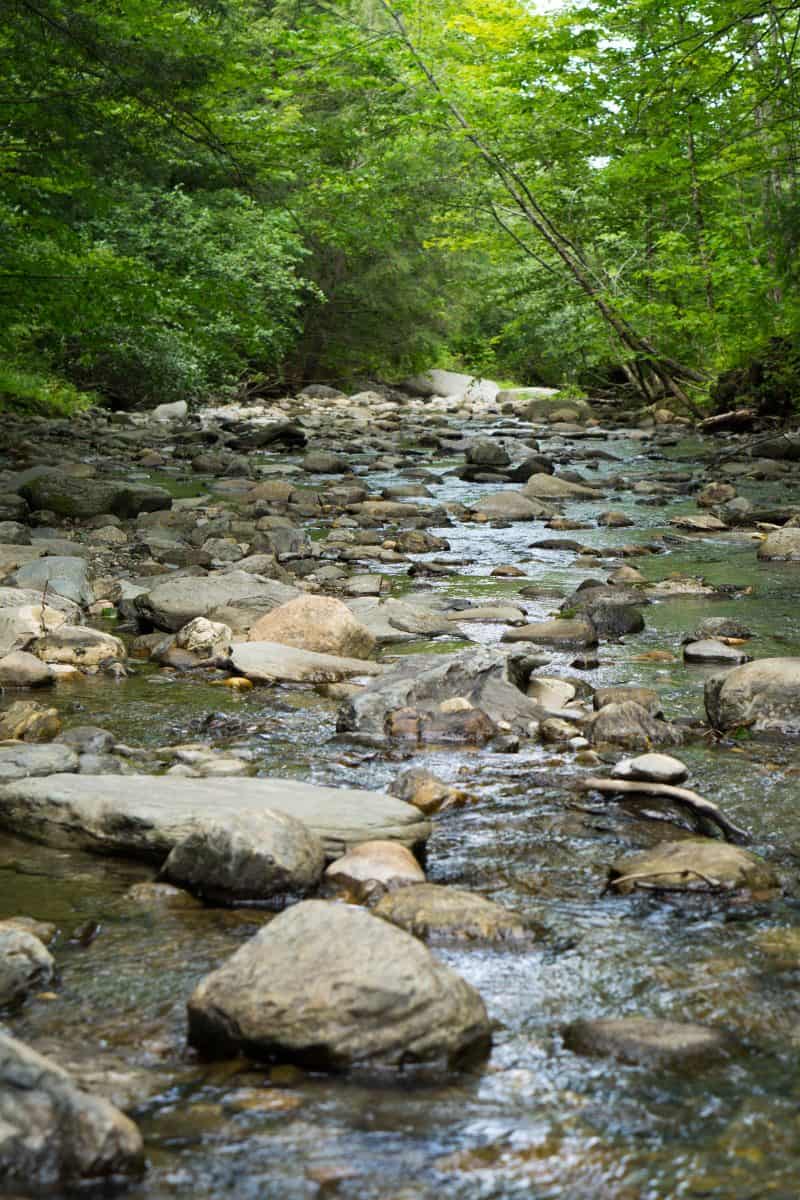 This was my favorite hike we did, probably because there was water involved. This wasn’t a difficult hike and was also relatively short.

Since I love water and streams so much, we made sure to head to the base of the waterfall as well to wade in the water and get some better shots. It was crystal clear and cold, which was super refreshing. I’ll let the pictures speak for themselves. 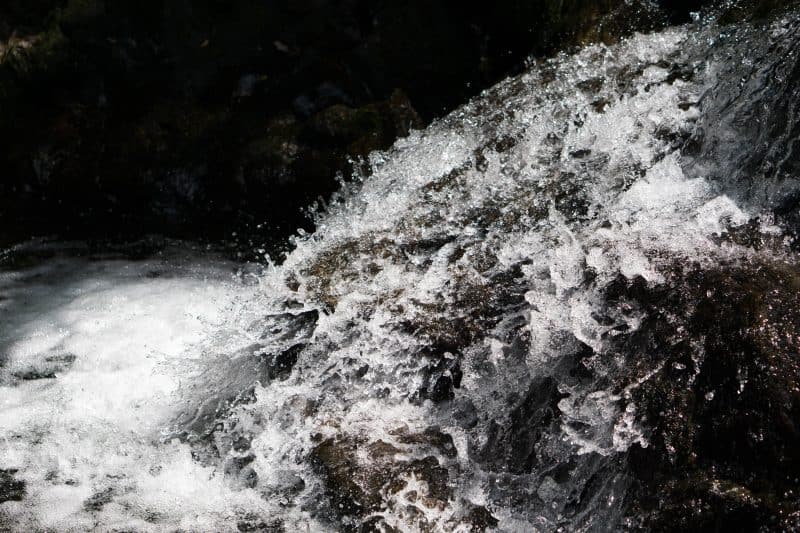 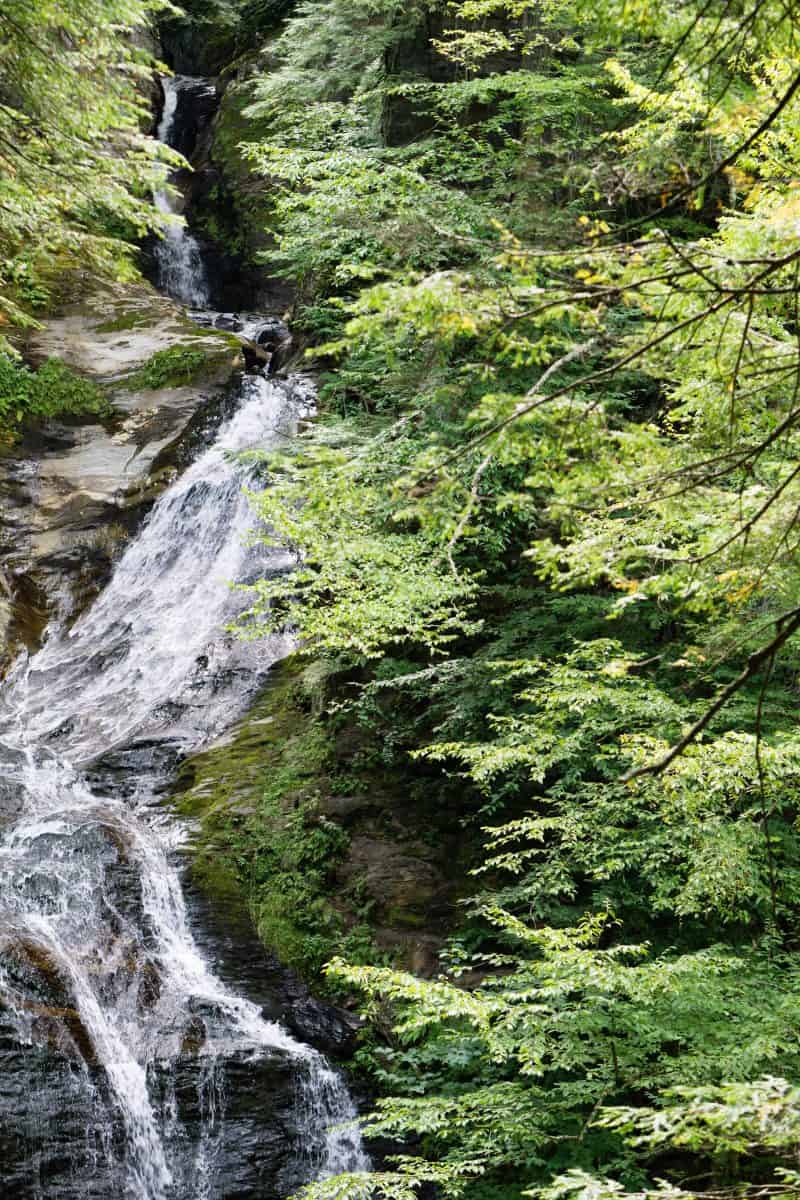 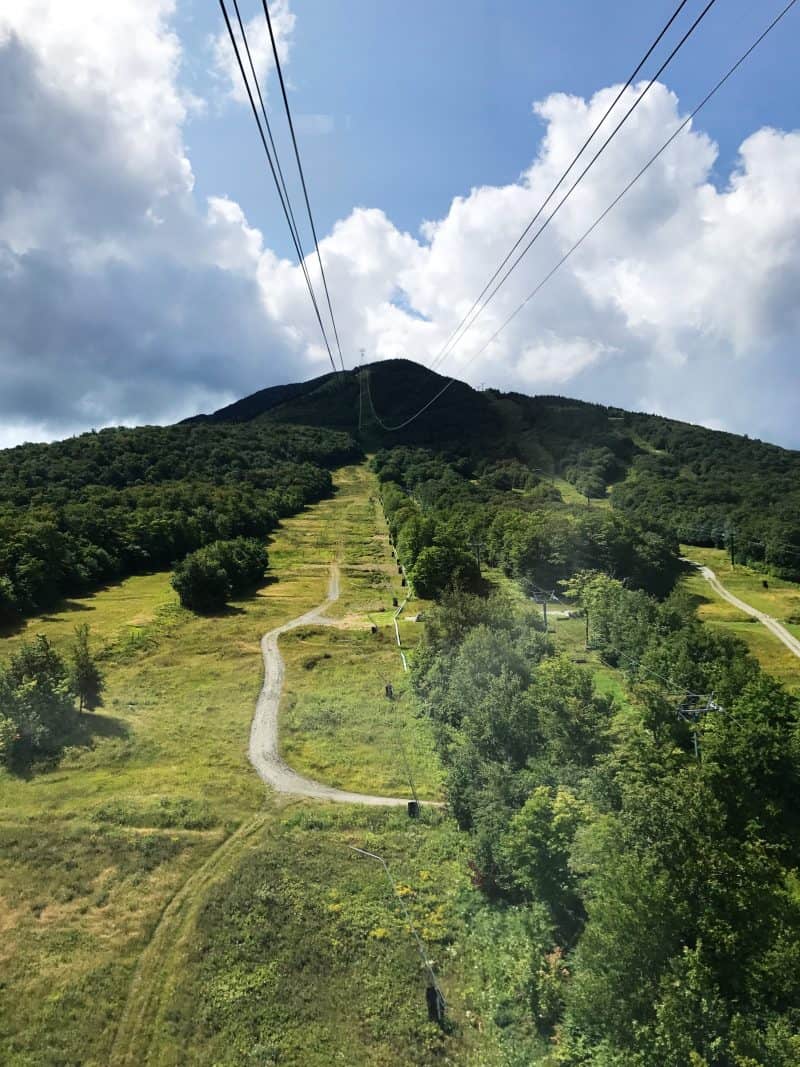 This hike was magical because it involved a tram that took us 4000 feet to the top of the mountain. The views were incredible and we were able to hike around the top over all kinds of rocks. The motto Jackie and I decided on was “commit like a goat” because we often had to hop around and be really mindful of balance and footwork as we went (especially in a boot). 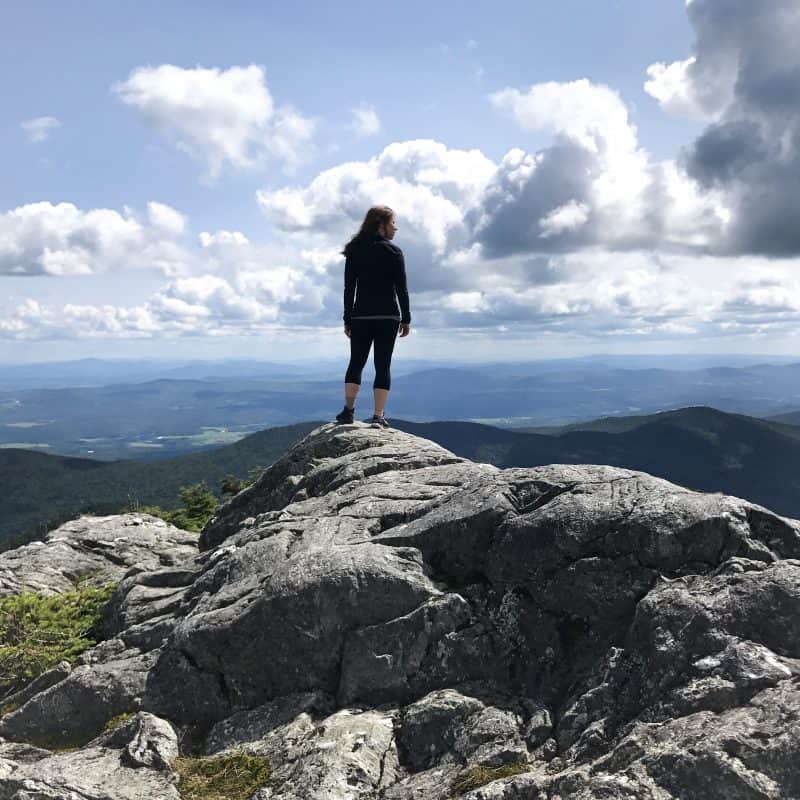 There is a ski resort at the bottom, so during the winter the mountain is full of skiiers and what others were using as trails to hike the entire mountain would later become snow trails. You can make this hike as easy or as hard as you want by simply getting off the tram and snapping some pictures, hobbling around on rocks like we did, or walking for much longer down the ski trails in the summer.

There is a shop at the resort where we grabbed lunch, but that was not knowing that there is also a small cafe at the top where you can grab food. Even so, I would suggest getting one of the EPIC sandwiches at the resort store before going up or bringing your own. Tram tickets are $15 and leave every half hour. 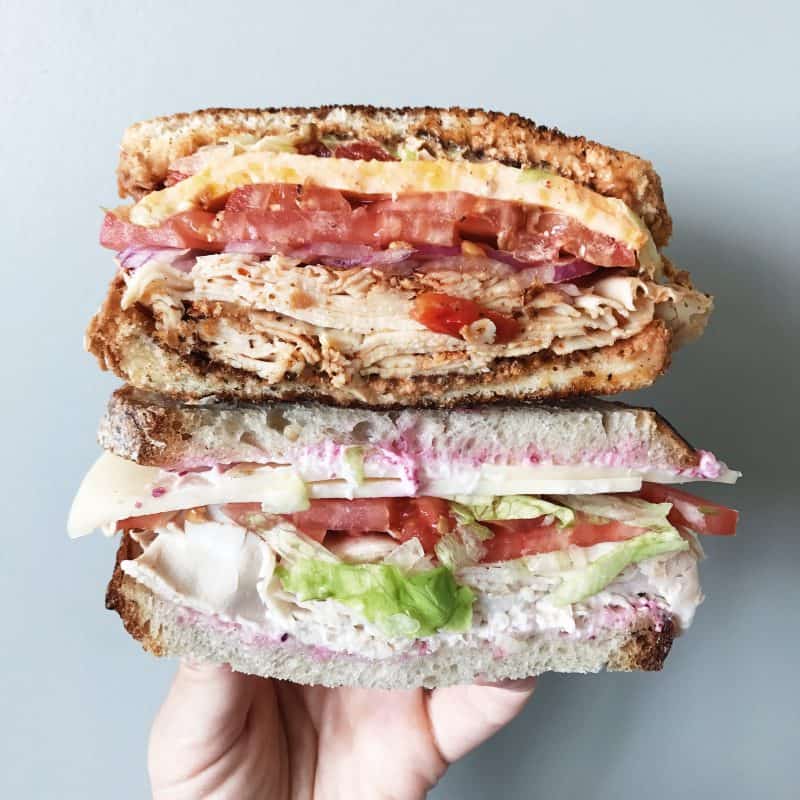 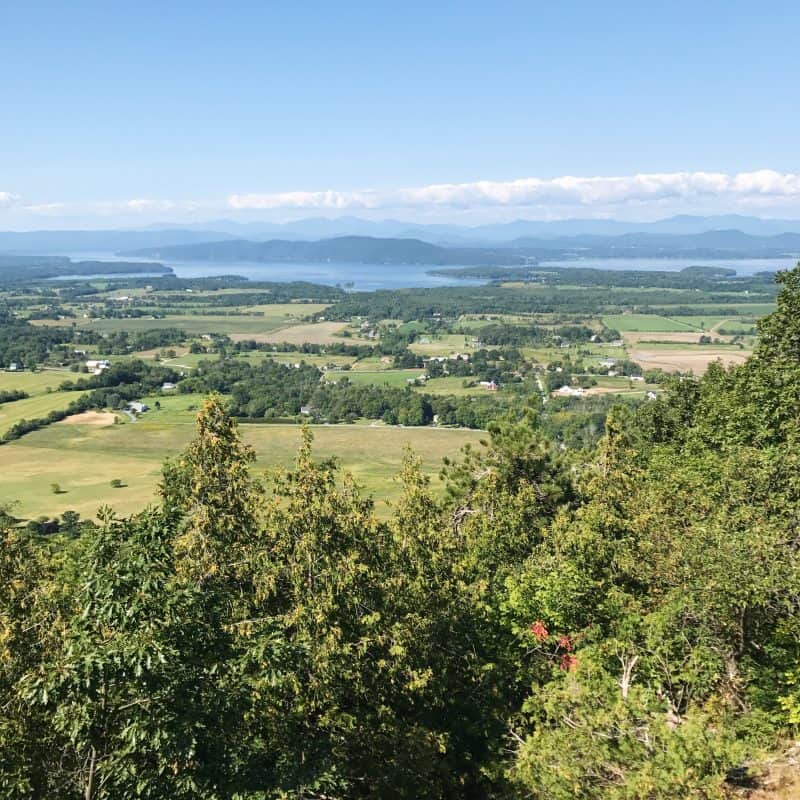 First thing on Sunday, we headed out to Burlington, grabbed breakfast, then drove to Mt. Philo. We were a little pressed for time because I had to catch my flight later in the afternoon, so we drove to the top rather than hiking the mountain. If we had more time, it would have been a nice, long hike to do.

The summit was pretty popular and there were many Adirondack chairs to relax in and enjoy the scenery before heading back down.

Another side note is that unless you have a park pass, state parks in Vermont cost $4 to enter. 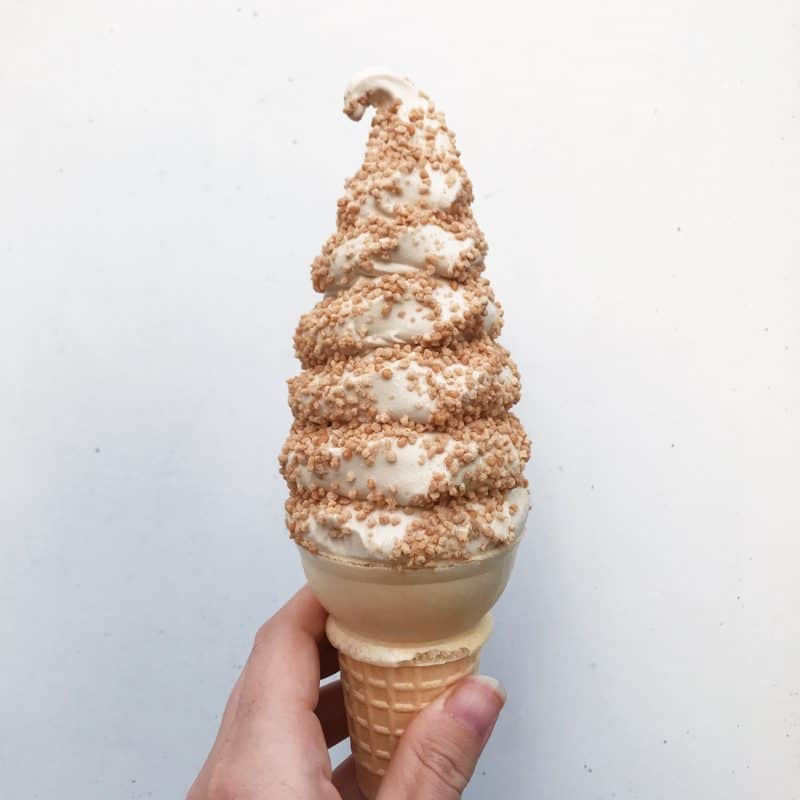 Let’s just get this one out of the way.

In Vermont, soft serve ice cream cones are called creemees. I don’t know why and I don’t like it, but that’s how it is. 🙂 You’ll see stands in a lot of places and if you’re really in a maple mood, you need to get a maple with maple sprinkles like Jackie did.

After we went to Mt. Philo, we made a quick 5 min drive south to Cookie Love, a small shop off the main road that serves a number of different types of cookies. The premise is simple and the cookies are pretty good, so I’d recommend making a stop.

If it’s hot, you can also get a cookie ice cream sandwich or one of their many creemee options. 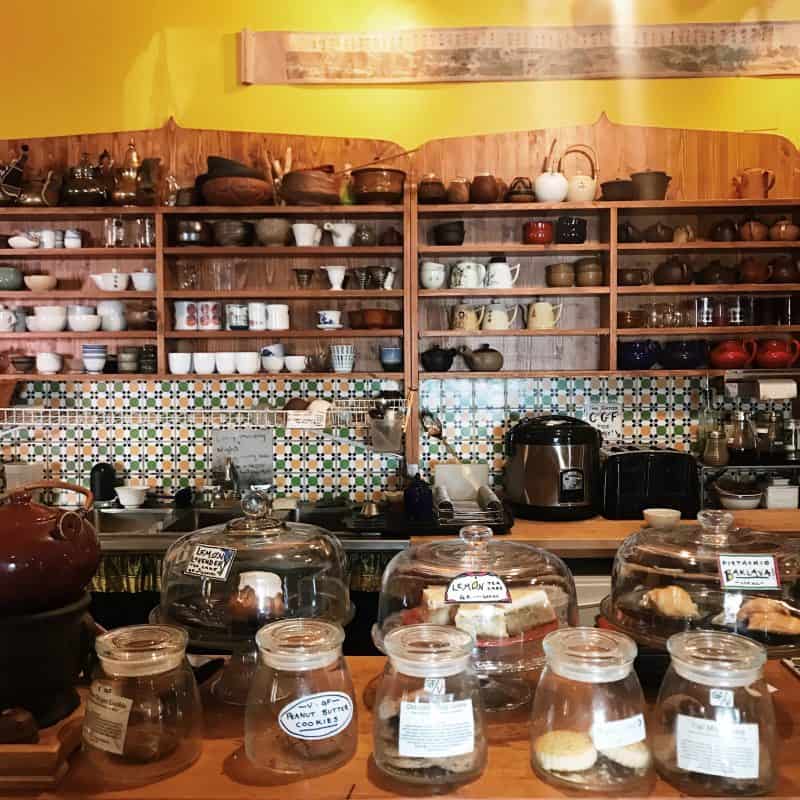 This place was amazing and I’m on the hunt for something similar in Chicago.

It was bright and sunny outside, but when we walked in it was cool and dim. It smelled like a mixture of tea and incense and it was intoxicating. It felt like I had stepped into another time or another country where tea is the most sacred thing you could drink. I loved it immediately.

You have the option of sitting at one of their tables or sitting on the ground in one of a number of booths where you must first remove your shoes. We elected for a table and were given menus that were almost the length of a short novel. There were a ton of teas to choose from and detailed explanations of each one. Depending on the type you chose, you were given any number of individual tea pots and I saw more kinds of tea preparations than I even knew existed.

Of course I had a long conversation with the most enthused tea lover I had ever met and bought a new kind of black tea to try at home. The loose leaf teas were kept in wooden drawers that made me think of an ancient Asian apothecary and if this place existed near me I would spend all of my money there. If you’re ever in Burlington and like tea, you MUST go here. 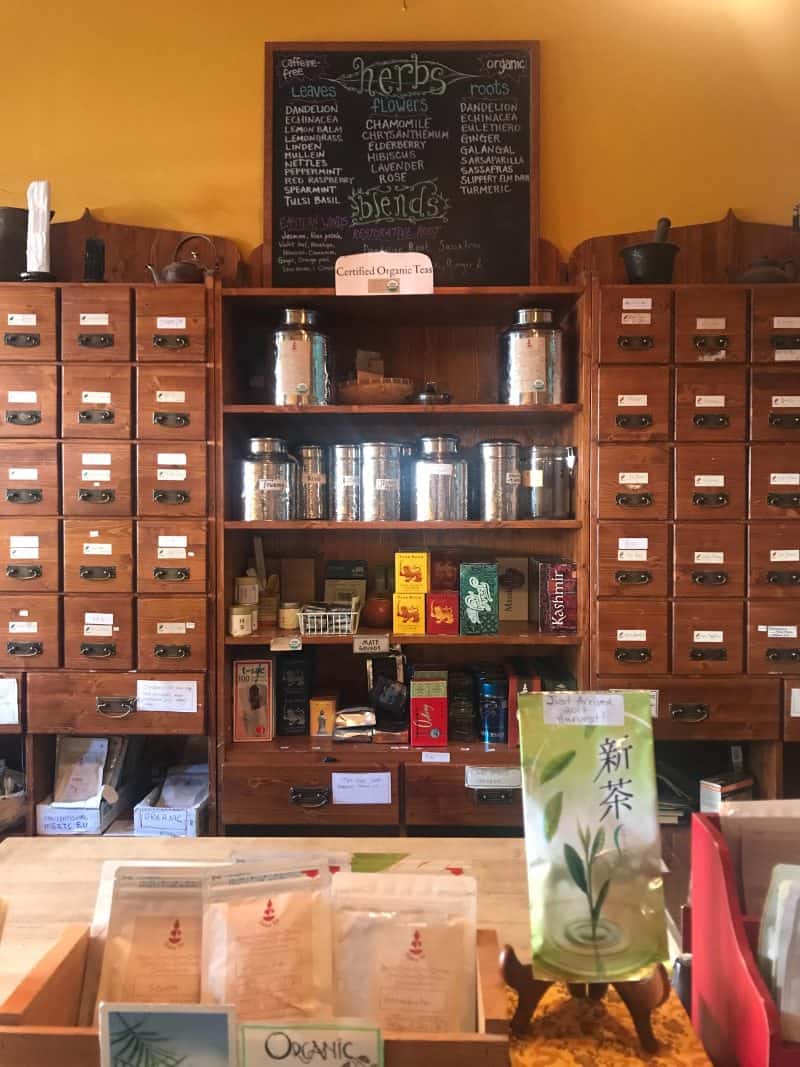 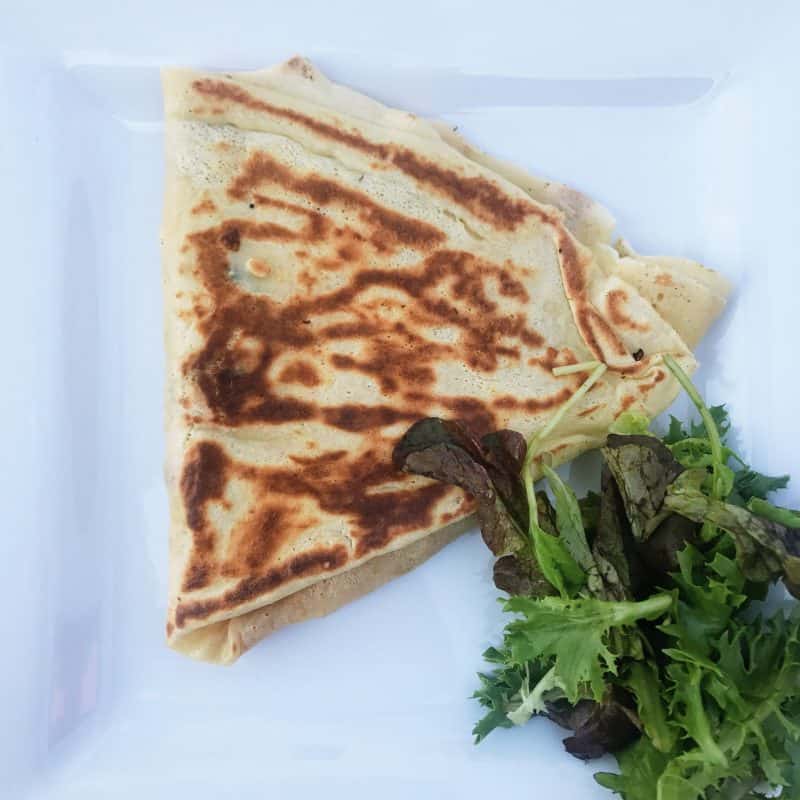 We stopped here for breakfast on Sunday before heading to Mt. Philo and I also happened to have it again for dinner when my flight was delayed on the way home (there’s one in the airport).

As the name implies, they specialize in crepes and I wasn’t sure what to expect given the extensive nature of their menu. Our breakfast was delicious and it was probably the best crepe I’d ever had in that it was sturdy and not oily at all. While breakfast was delicious, my chicken “crepadilla” at the airport left more to be desired, though I still stand by the fact that the crepe itself was top notch. 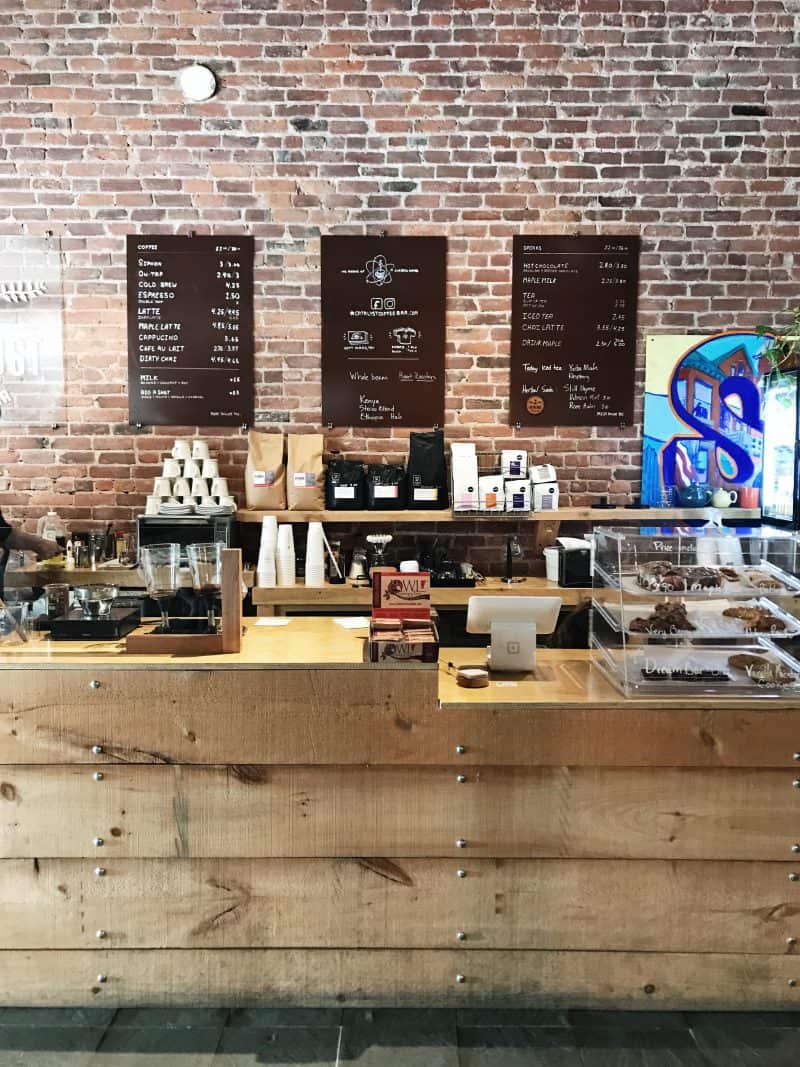 A short walk from where Jackie lives is Catalyst Coffee Bar, a ridiculously cute coffee shop that I would frequent all the time if I liked coffee as much as I used to. 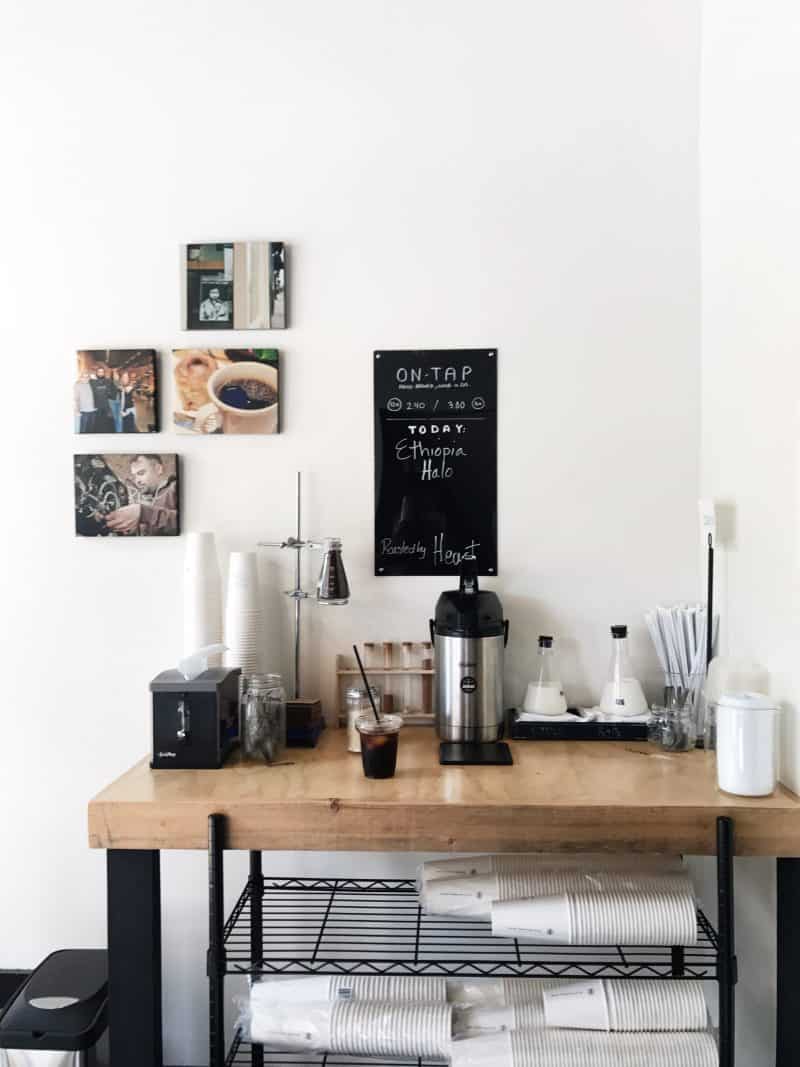 They have an extensive selection of teas which I didn’t notice until I was already drinking my maple latte, and I love how their brewing process and condiment counter use influences of science and days spent in the lab. It’s cozy and adorable and if you’re ever in town, you should go. 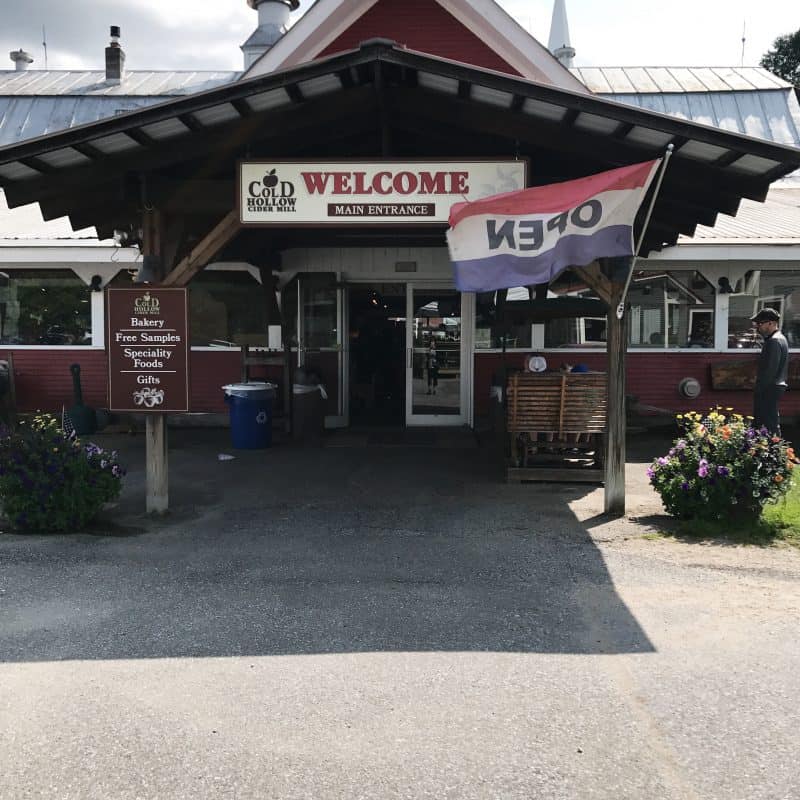 Cold Hollow is an apple cider mill that also sells baked goods (hello apple cider donuts), jams, dressings, trinkets, and many other things you think of when visiting a small town shop. You can watch their process of making cider through large glass windows, but sadly when we went they weren’t currently making any.

They do have a tasting tank and I went back more than once because it was the most delicious cider I’d ever had. 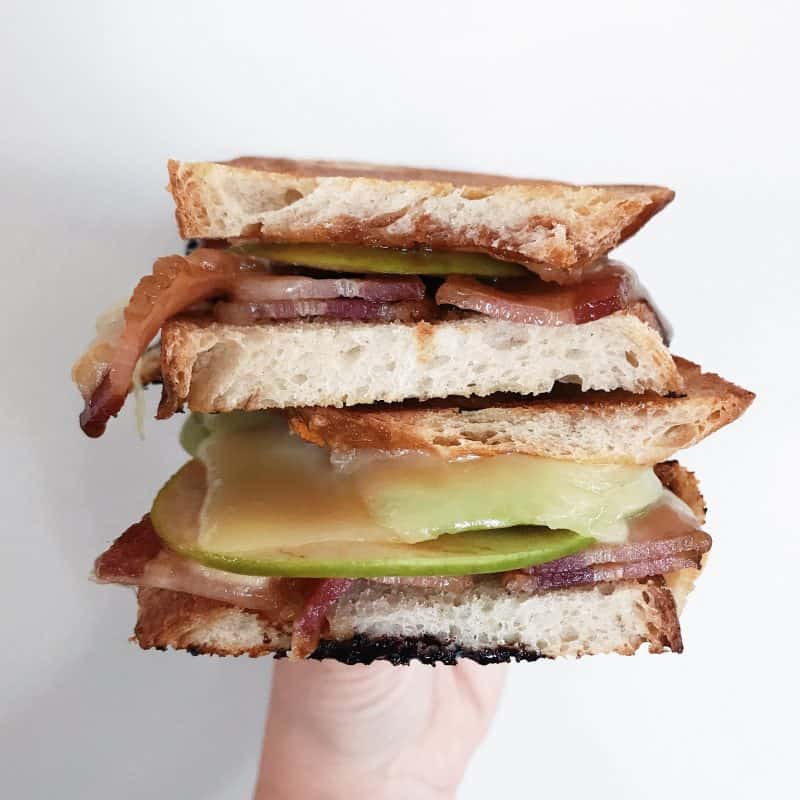 Right next door to the mill is Apple Core Luncheonette where we stopped for sandwiches. It got good reviews on Yelp, so I made sure to stop by. I only wish that I could have tried some of their other ones because they all looked so good. 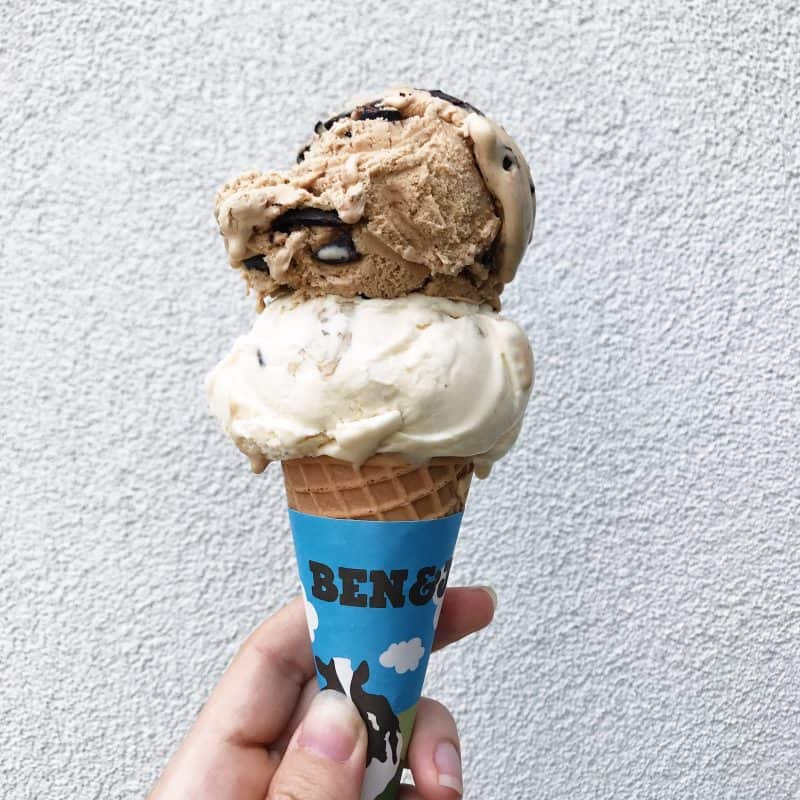 The Ben & Jerry’s factory is located in Vermont and is the only place you can get the maple + walnut flavor of ice cream. We opted out of the actual factory tour and just grabbed some ice cream before heading back again.

Another fun part of the factory is the flavor graveyard dedicated to all the flavors that have been discontinued — complete with headstones and all.

Aside from all the hiking and eating we did, it was great to see Jackie again and be reunited with Pinky for a couple days. It was a nice break from work and I liked being able to get out of the city for a little while. 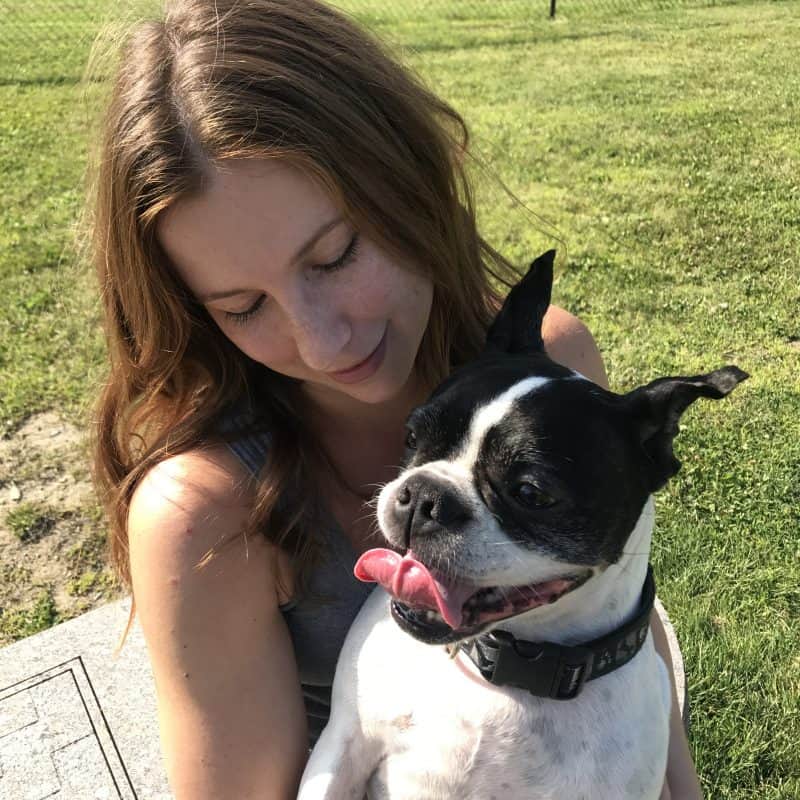 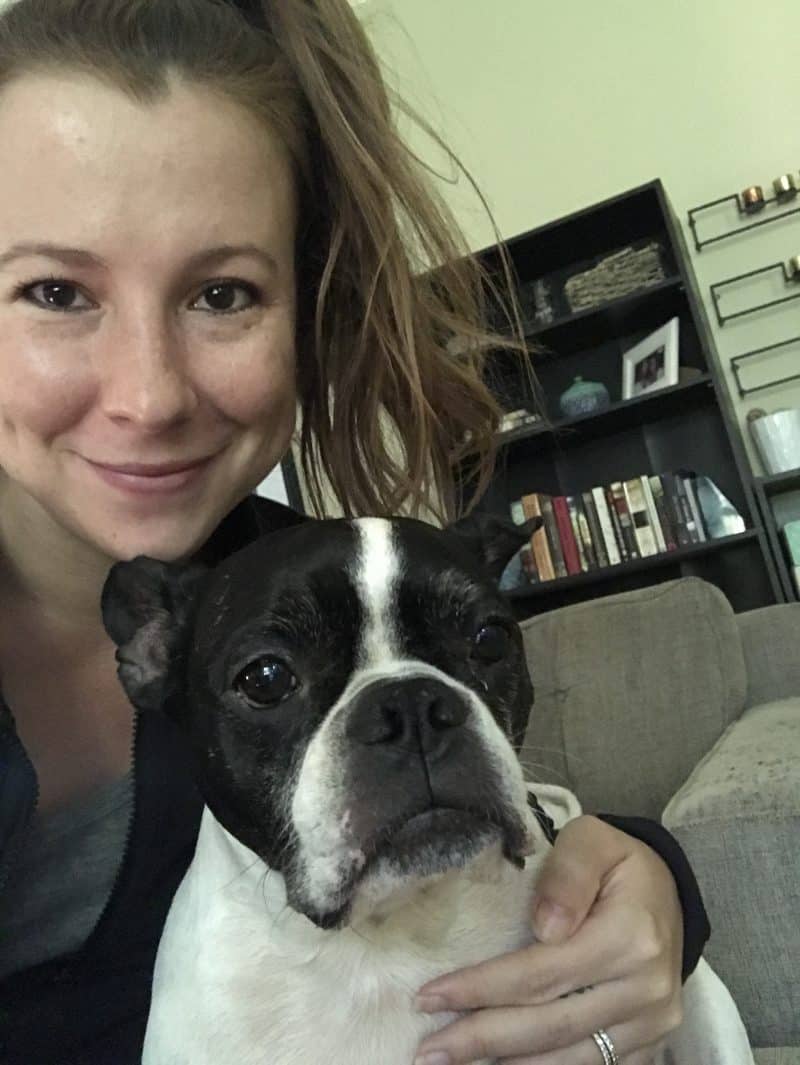 There are tons of flowers in Vermont (during this time at least), and the next time I go back I want to plan on later into fall because the colors are supposed to be unreal. 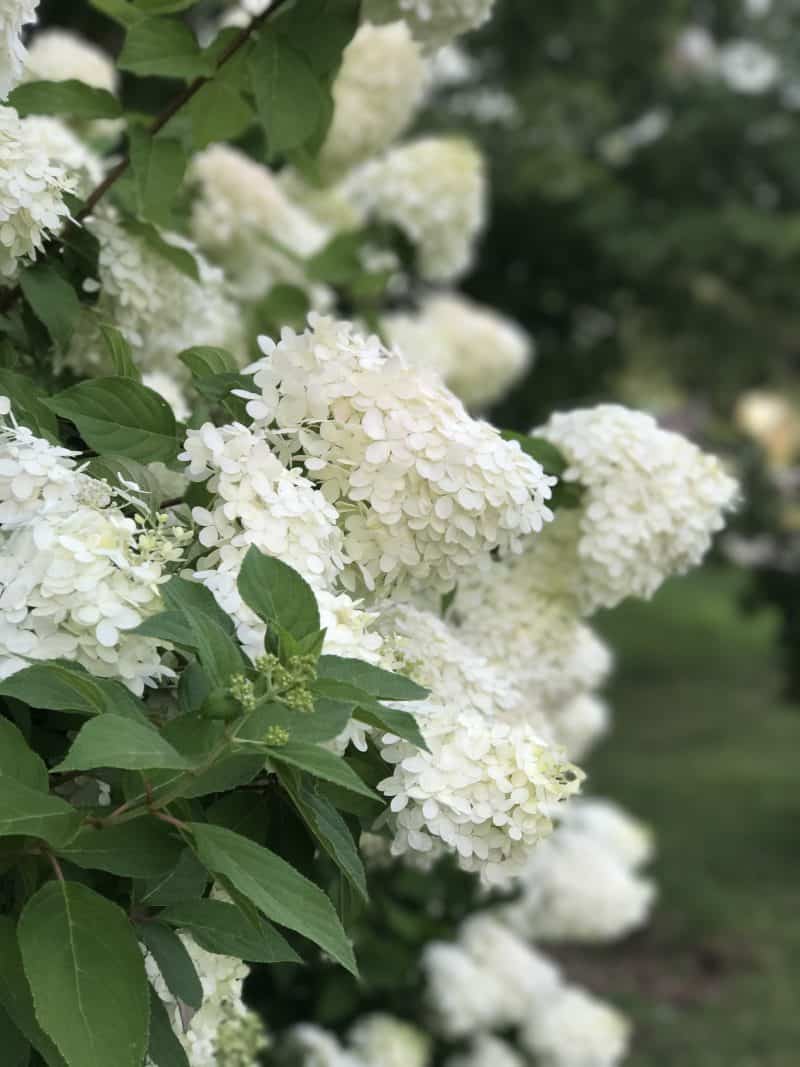 If you’ve made it this far — thanks for reading and let me know if I left anything out!

12 comments on “Where to Hike and Eat in Vermont”