The Difference Between Authenticity and Transparency

This was the subject of a presentation I gave at a mental health marketing conference back in 2016. For the purposes of that presentation, I wanted to explain the importance of both authenticity and transparency by companies and brands working in the mental health field. The distinction between the two was only one slide just for clarification purposes and went on from there.

In today’s saturated social media world, these words get thrown around all the time — so much so, in fact, that they seem to have lost all meaning. On a lesser extreme, they simply feel diluted as you hear virtually every health and wellness person spouting their importance.

Did you know there’s actually a difference in the two words? Let me break it down for you. 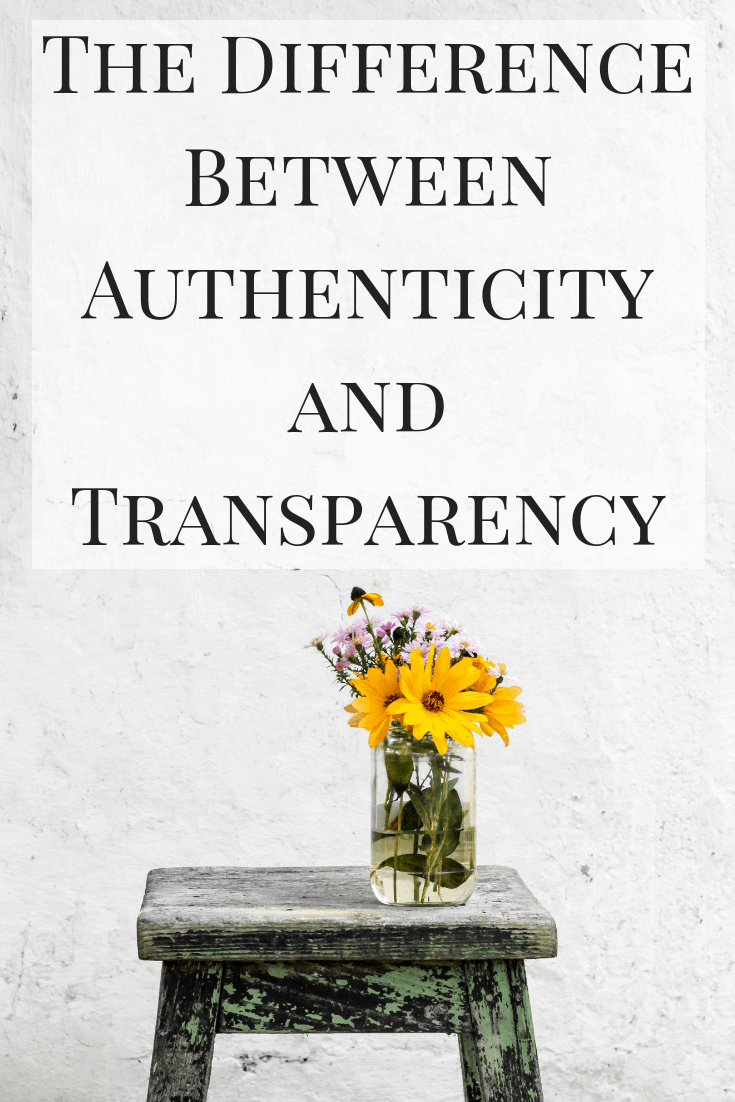 authentic – (adj.) true to one’s own personality, spirit, or character — this is the WHAT

transparent – (adj.) honest and open : not secretive — this is HOW MUCH

Authenticity is the WHAT of sharing things that are true to yourself: I love eggnog, I have depression, I’m a recovering addict, I don’t like pickles, etc. You choose what to share with others. Just because you don’t share something about yourself doesn’t mean that you’re not authentic, but if you share things that directly conflict with that self, then that’s another story. I could decide not to share that I don’t drink, which is fine, but if I then show myself out at bars or advertising alcohol that I know I won’t drink, that’s an inauthentic image of myself that I’m portraying.

Transparency is deciding HOW MUCH of that authenticity to share. The best example I have of this is my marriage (yes, I use this example for a LOT). Being authentic means that I was sharing with you that I was having trouble in my marriage, but I was less transparent about the details because it involved another party (Neil). While I may have been willing to share more and be more transparent, I respected his wishes when writing about it and didn’t vomit everything on the table.

People respond to both authenticity and transparency because it creates trust. Trust is necessary in establishing relationships. I have unfollowed a lot of people who I felt were portraying a fake version of themselves (because I knew both sides). I don’t really have any interest in taking fitness or nutrition advice from people who either aren’t certified or I know have disordered eating habits and don’t actually follow what they’re putting out there.

Here is what I’ve discovered in my 34 years of life — lying will always be found out. It may not be today or tomorrow, but it will be some day. Also, lying is EXHAUSTING. You have to remember what lies you told to which people and then make sure that those people don’t talk to other people and it’s just a really mentally exhausting battle for no reason whatsoever. When I decided to improve myself as a person, one of the first things I did was stop lying.

When you tell the truth (which can be hard sometimes), it’s done. It’s out there, you can let it go, and you don’t sit there ruminating over something that begins to feel like its crushing you over time.

How Much Is Too Much?

So we’ve established that being an authentic person is important if you’re trying to connect with others. Your level of transparency is up to you. Different groups of people respond differently to those levels, so it’s really about how comfortable you feel about sharing.

For instance, there’s always that group of people who never understood status updates on Facebook and would gripe about “who cares where you’re eating lunch??” You know who I mean. Obviously, these people probably aren’t going to follow you anyway because they aren’t interested in what you’re doing. Then there’s the opposite end of the spectrum: people who want to know what you’re doing at all times. Figure out what you’re comfortable sharing and that will attract your community.

Another key thing to remember about transparency is to use it appropriately. Think about your niche and the messages you are trying to convey and make sure that your level of transparency adds to those messages. Technically you’re being transparent by sharing what you eat on a daily basis, but if you write about the tech industry, it’s not going do anything to further that content.

Ultimately, what you share is your decision. Not everyone will like what you have to share, just like you don’t like everything that other people share. That’s fine. Figure out your truthful, authentic voice and share as much or as little of that as you want. I think it’s important to understand the subtleties of the words if we are going to be throwing them around, which hopefully this post helped clarify. As always, you do you and that’s always enough.

2 comments on “The Difference Between Authenticity and Transparency”