Winter Adventures In Banff - Erin's Inside Job Skip to content

I have wanted to visit Banff National Park in Canada for years. When I found out I was pregnant, Neil and I took a once over on our travel list and tried to see if there was anywhere we wanted to go before the baby was born. We were originally scheduled to go on a cruise to the Bahamas with his parents and brother during the same time, but we ended up having to cancel it due to the fact that every port stop was on the Zika list.

We changed our plans to take a winter trip to Banff. The park is much more popular when it’s warm because there’s more to do, the lakes are a beautiful turquoise color, and the scenery in general is even more striking. Since we wouldn’t have a chance to go sans baby during those months, we decided to go in winter anyway, which turned out to be such a good choice. There were no crowds (which I hate anyway) and we were able to experience everything in a more low-key way. No matter when you decide to go, it’s going to be gorgeous. 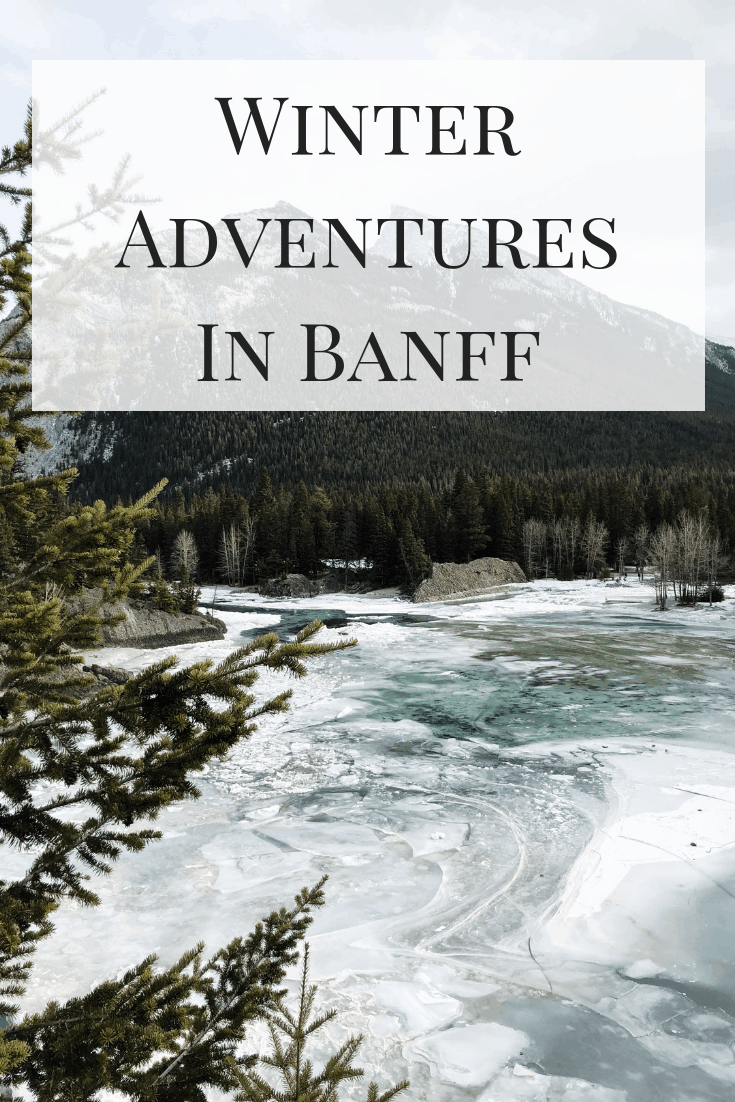 We saved some money on lodging by breaking up our trip and staying a night on either end at my friend Ange’s place in Calgary. To get to Banff, you fly into Calgary and then drive 90 minutes to the park. Our flight got in around 10:30 pm the first night, so we rented a car, crashed at her place, and then left for the park early the next morning. We did the same thing on the return since our flight out was at 8:30 am. This meant that we only had to spend money on one hotel night in Banff itself.

The town of Banff is pretty small, but adorable and beautiful all at the same time. The mountains are in the distance and there are plenty of small shops and places to eat in the downtown area. Almost every one of our servers was Australian which confused me until I found out that many come to work and ski in the winter months. 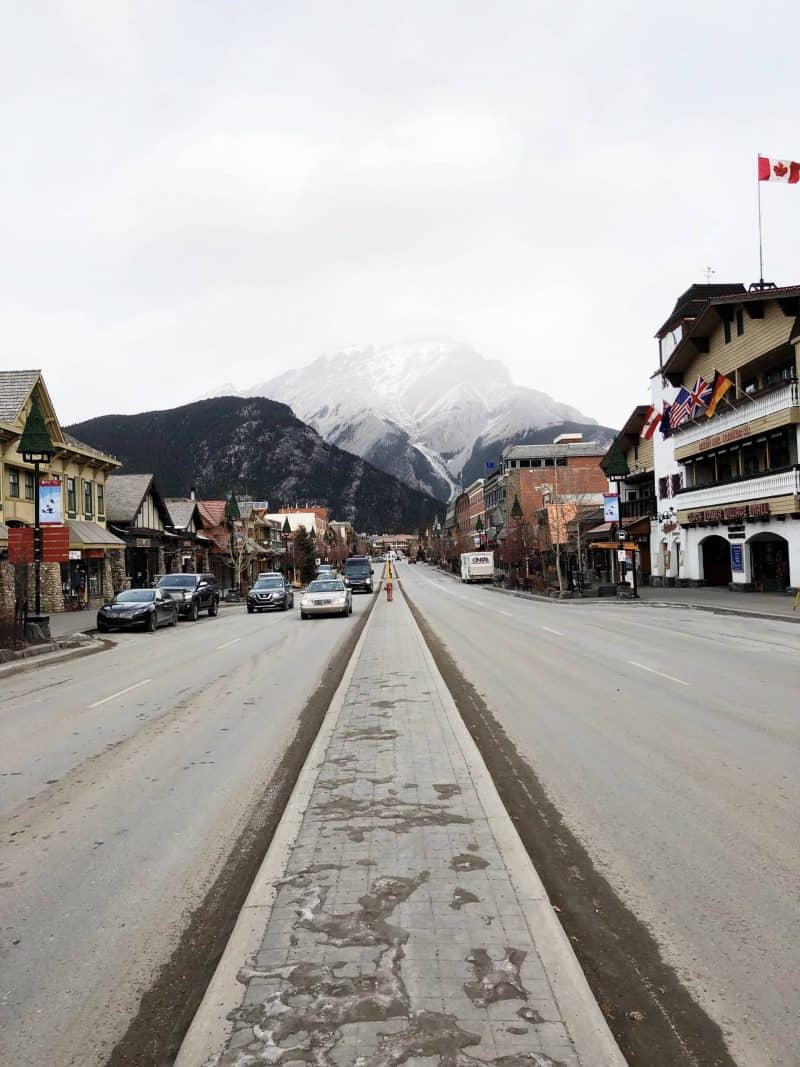 There are tons of cute places to stay while in Banff, and we found a good deal at the Moose Hotel and Suites right in downtown. There was a roaring fire in the lobby and our whole walk to our room smelled faintly of warm, smoky wood. It was magical.

We only stayed for one night, but we had a great time and the best part (aside from the free parking and wifi) were the two outdoor heated pools they had on the top floor. The contrast with the air temperature actually made me enjoy what was basically a really nice, large hot tub, but because of the baby I was only able to stay in for about 10 minutes. I don’t even normally like hot tubs, but after our hike that day it felt amazing and I wished I could have stayed in for longer. 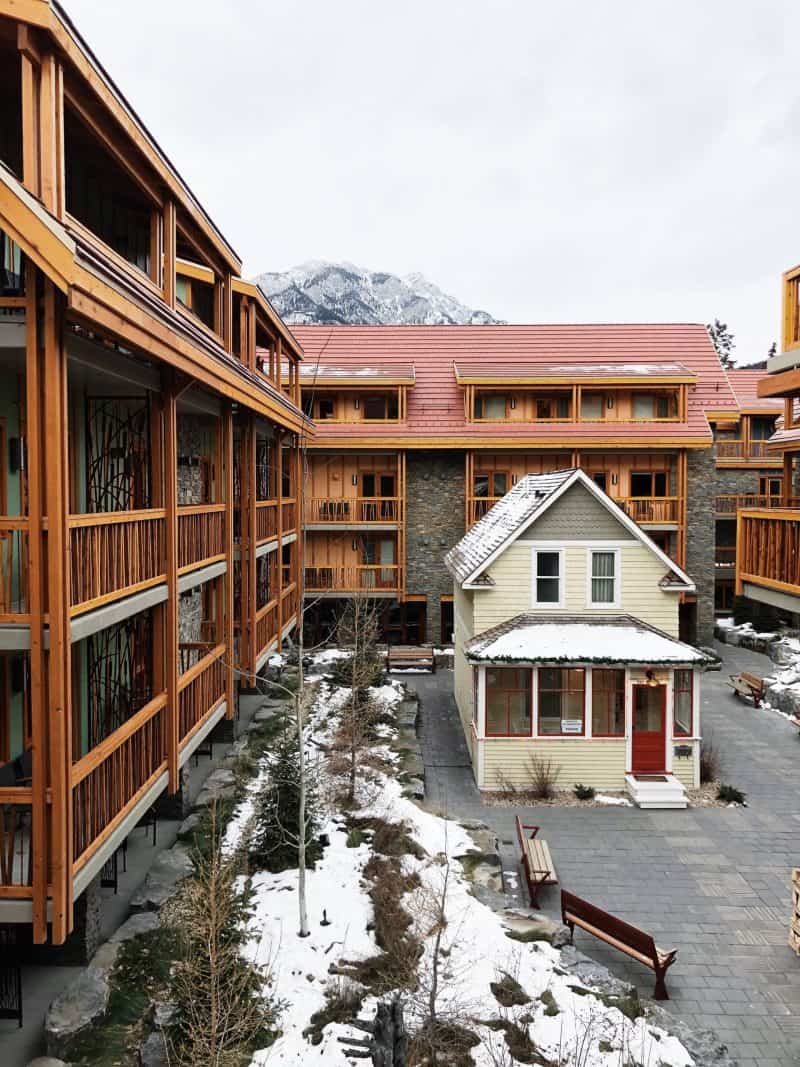 We only had two meals in Banff, but both were delicious. 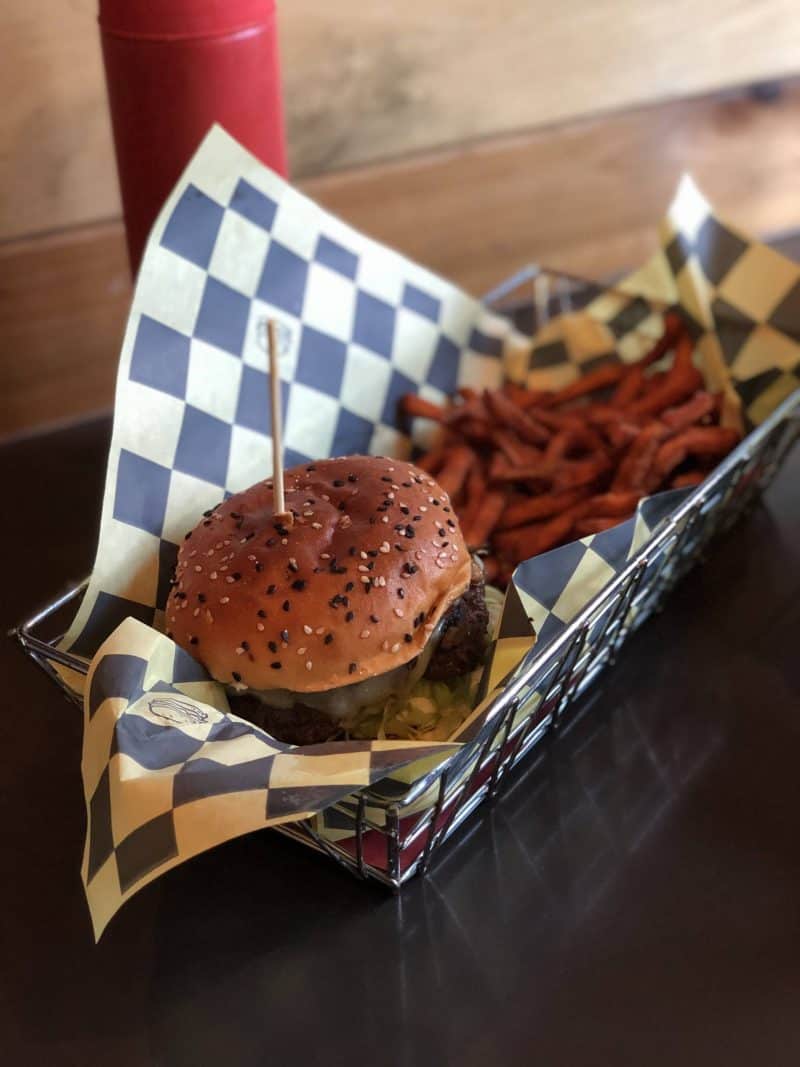 If you’re a skiier or snowboarder, Banff is a great place for both. Obviously I wasn’t going to be skiing at this stage, but if you are looking for a good place to go, Banff is it. There’s also ice skating and adventures like dog sledding if you’re looking for some options.

Lake Louise is about a 45 minute drive north of Banff. Admittedly, I didn’t do much research before we headed there and I was hoping that we would be able to see the beautiful contrast of the blue lake against the white of the snow. When we arrived, we realized that the lake was actually frozen over and there was no blue to see. Still, it was an expansive, impressive sight and we spent some time in the looming Fairmont Hotel that is situated right against the lake.

One of the most famous lakes is Moraine Lake, but the road there was already closed earlier in the season due to snow. Just another reason for us to come back when it’s warm.

We decided not to do any of the short hikes around Lake Louise because we were hoping to find somewhere in the park that wasn’t entirely frozen over. I did some quick Google searches from the hotel lobby and decided on our next stop — Johnston Canyon. 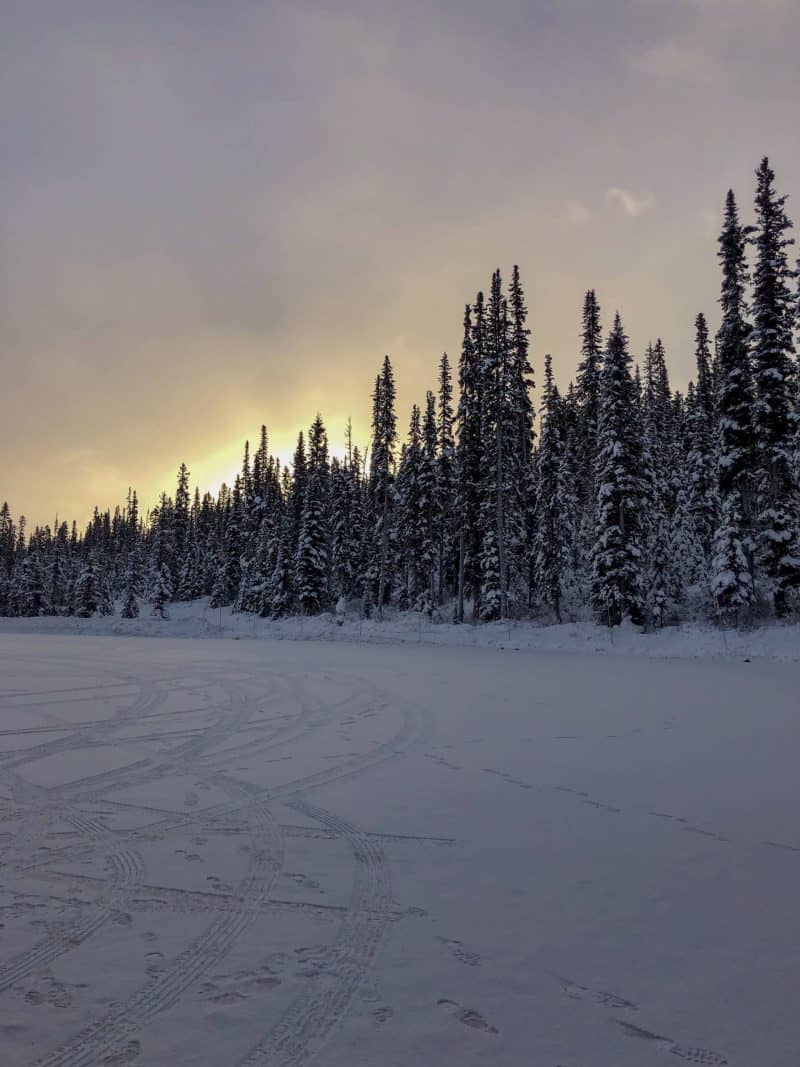 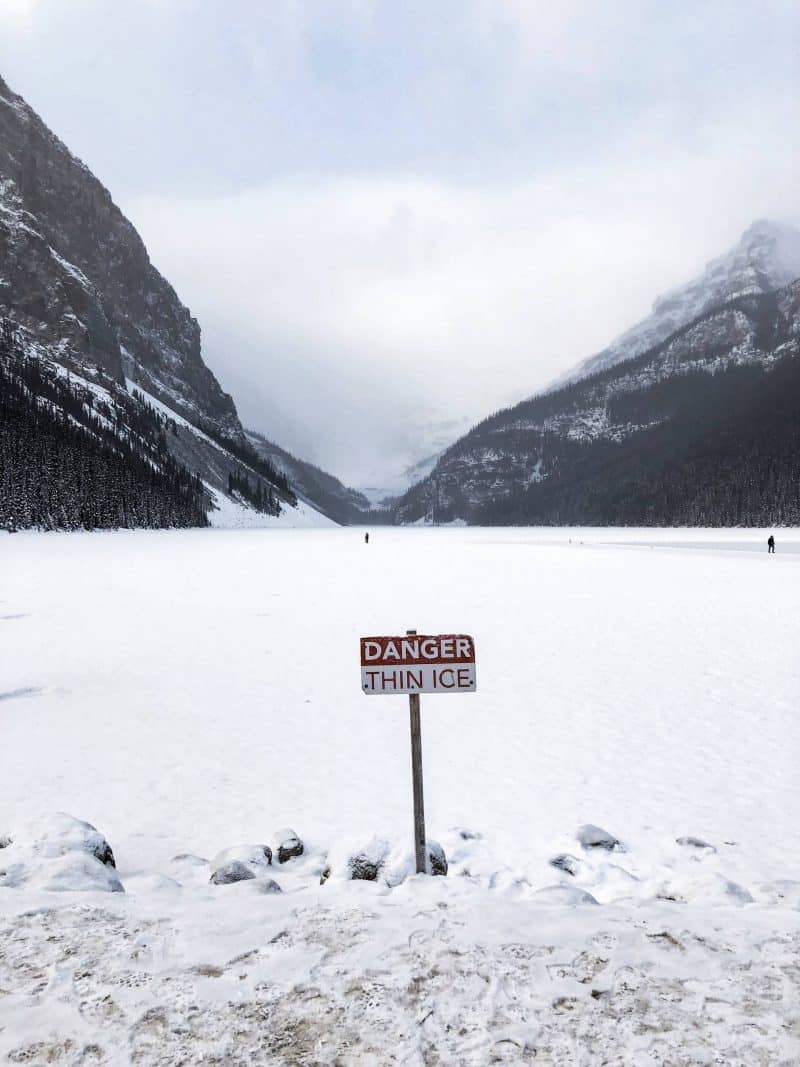 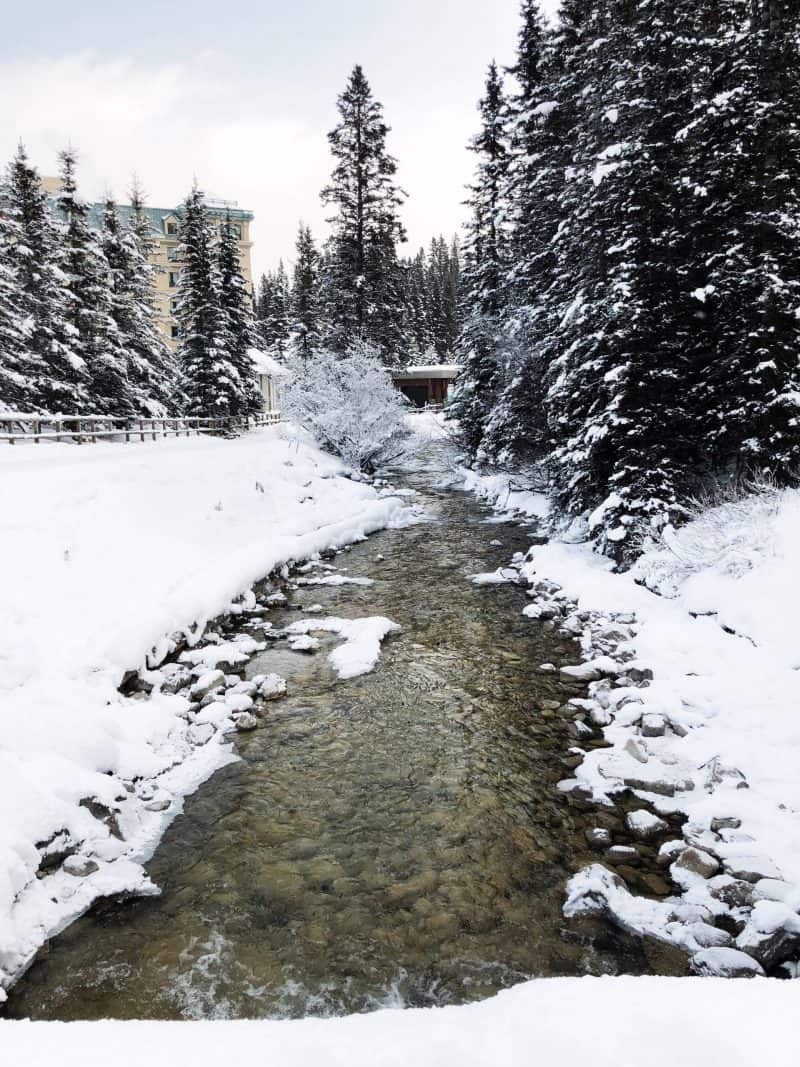 Thankfully, Johnston Canyon was located along our drive back to the town of Banff, so we were able to make a quick detour. There were two main parts to the hike: the Lower Falls and the Upper Falls. You could continue on much further to a place called the Ink Pots, but we decided to skip that part because it would have taken up most of the day.

The hike was absolutely beautiful. There are catwalks built into the mountain which allow you to get a more birds-eye view of the canyon. The ice was open in several parts, so you could see the freely flowing water underneath which was so peaceful. 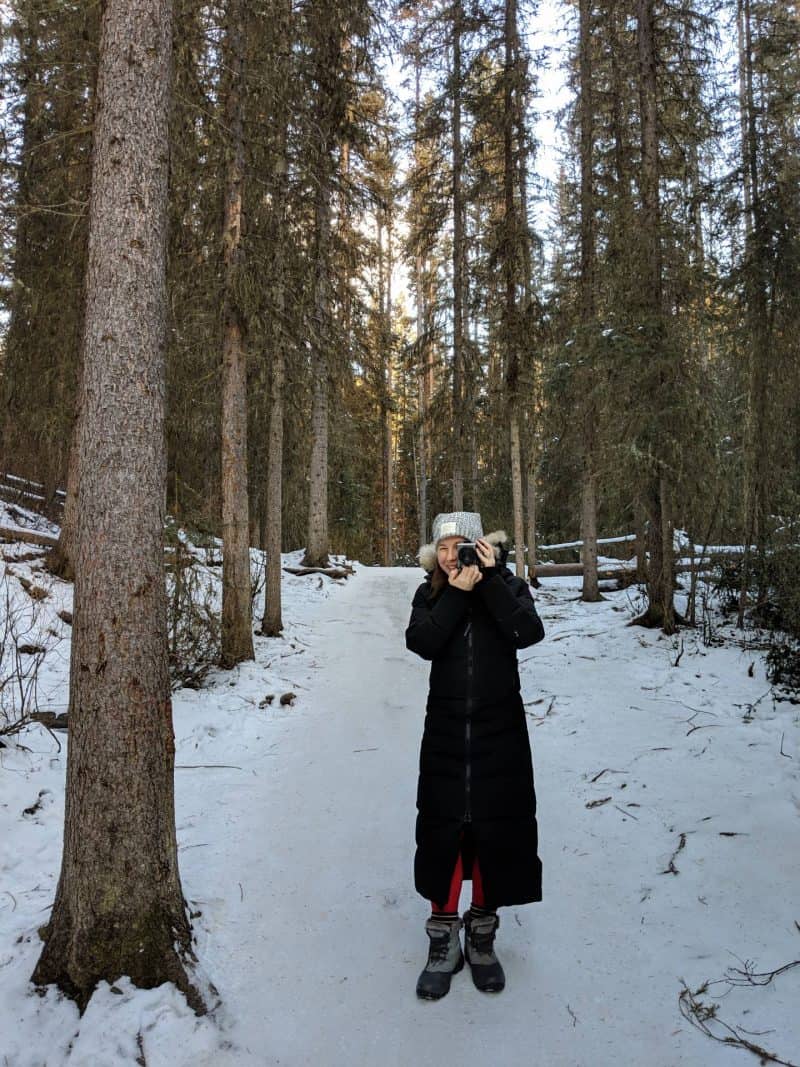 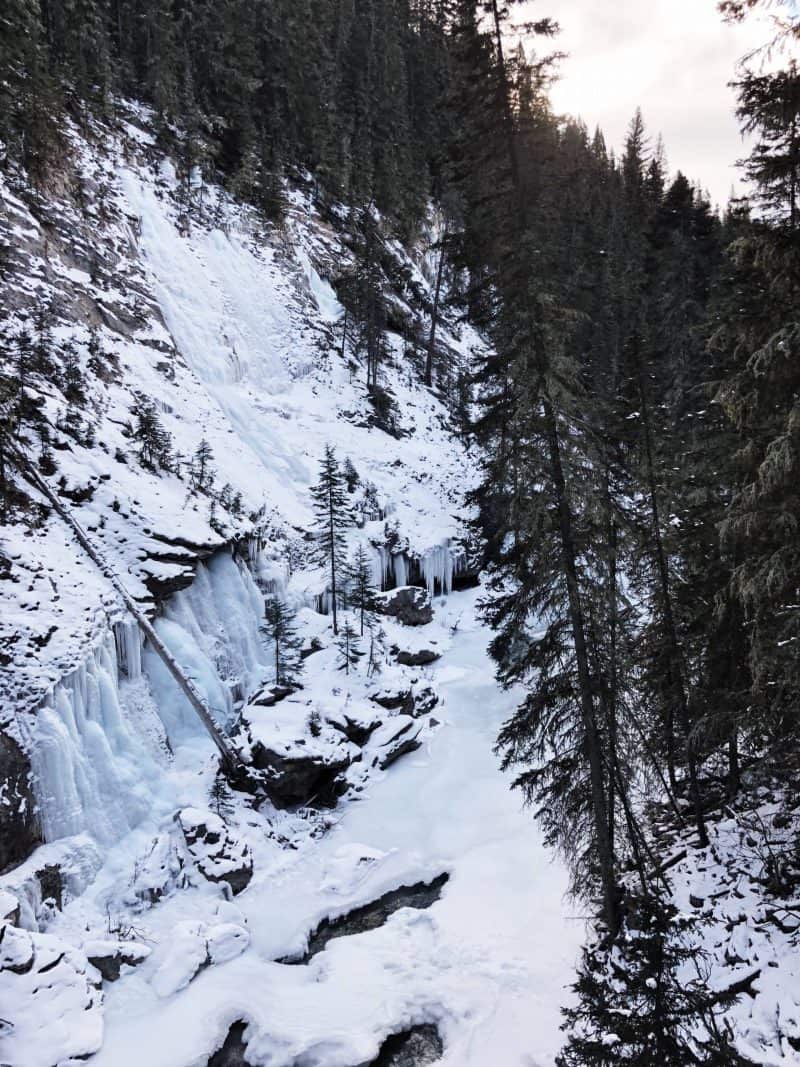 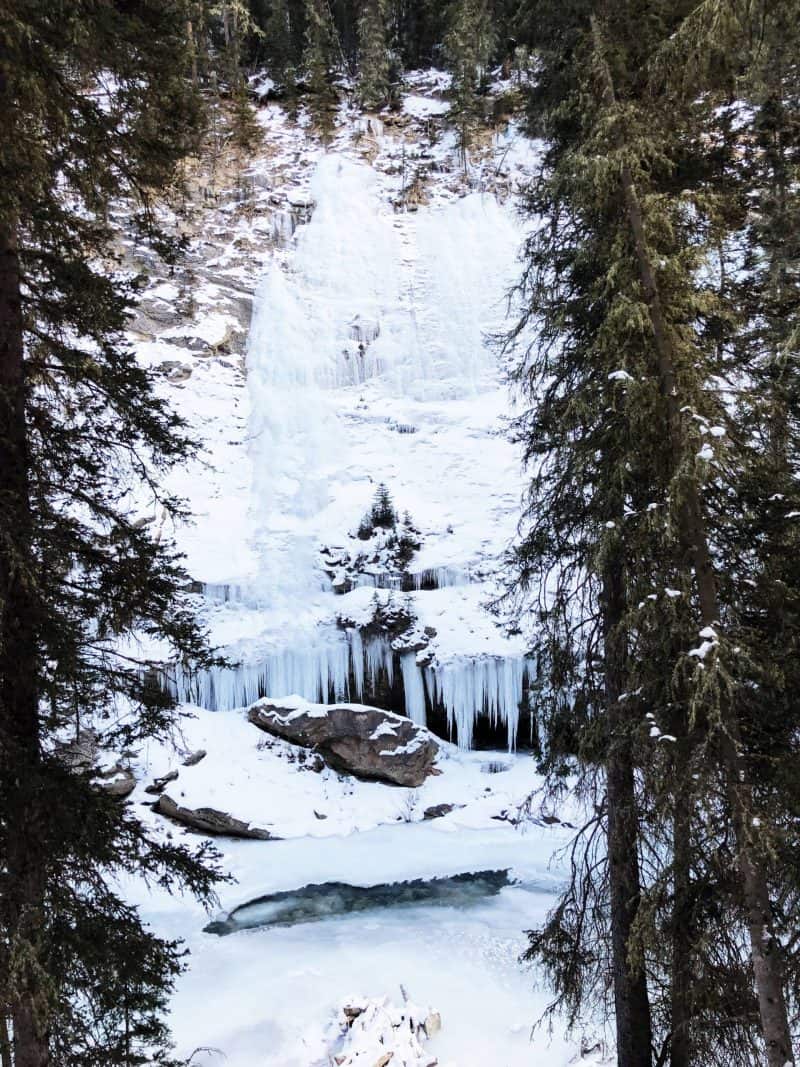 We reached the Lower Falls, which wasn’t frozen at the bottom so you could see the pools of water. Although the falls were mostly frozen, you could still see through at parts that underneath the water was still rushing down. 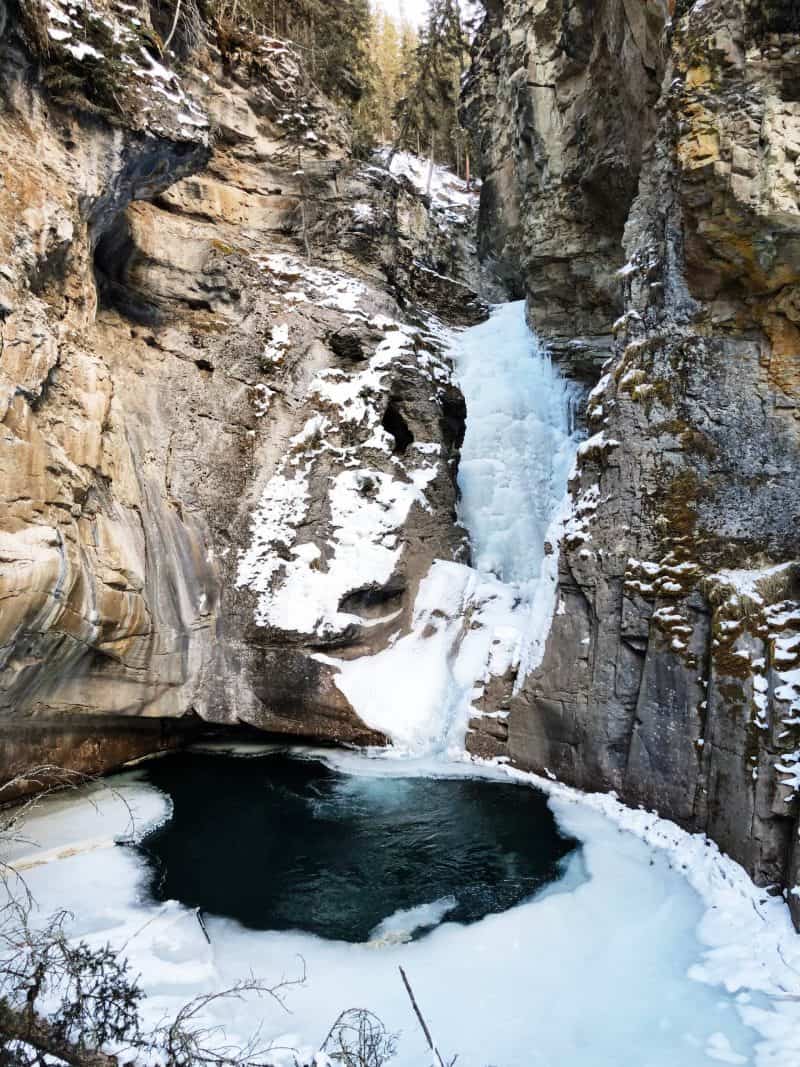 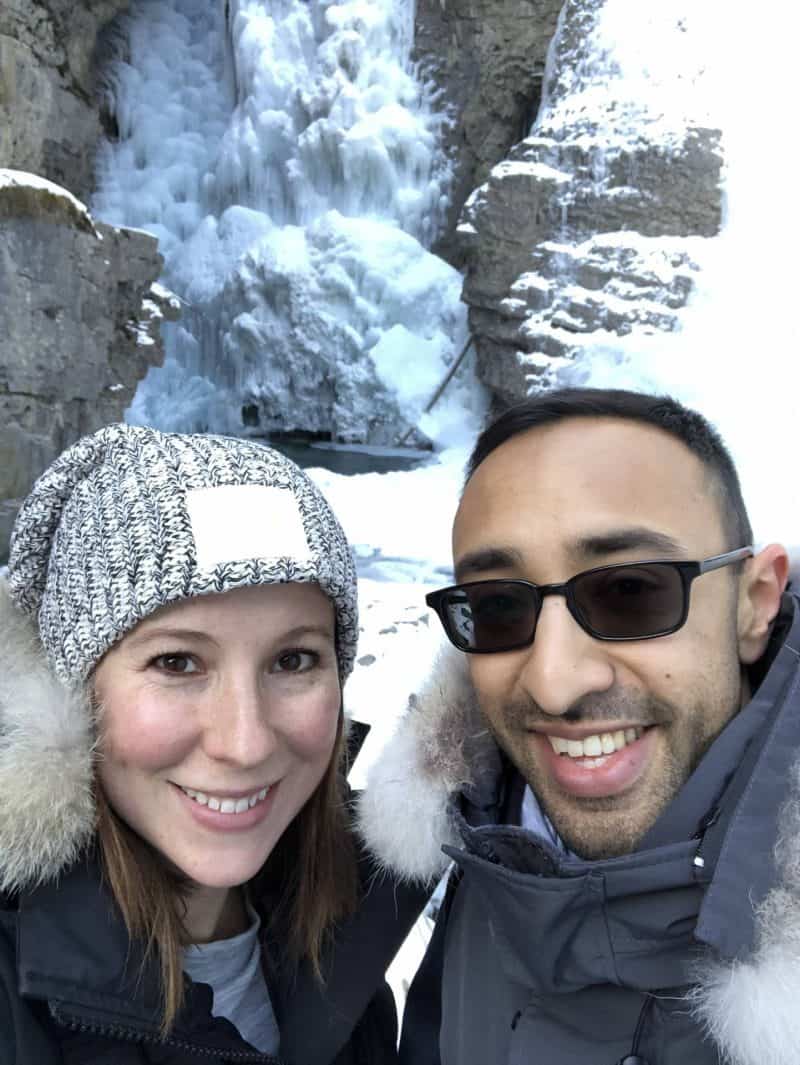 We then made our way to the Upper Falls, where we were impressed to see a good number of ice climbers attempting to scale the frozen waterfall. We stayed to watch them for a little while before turning around and heading back. 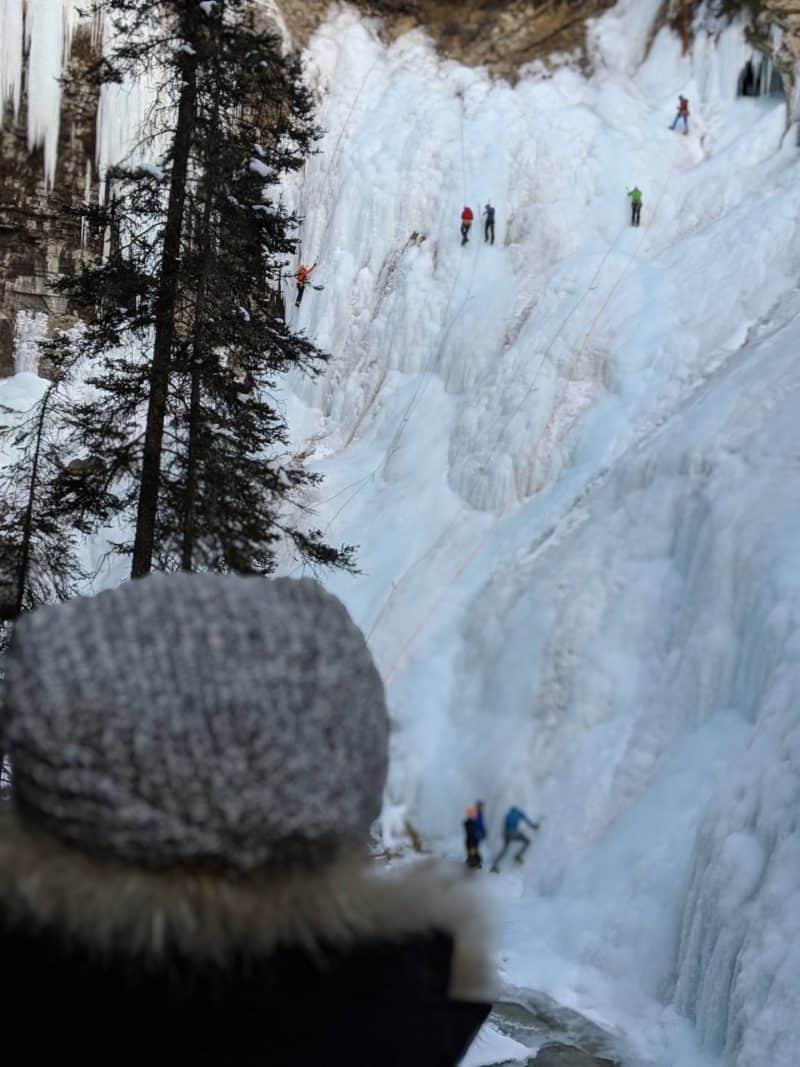 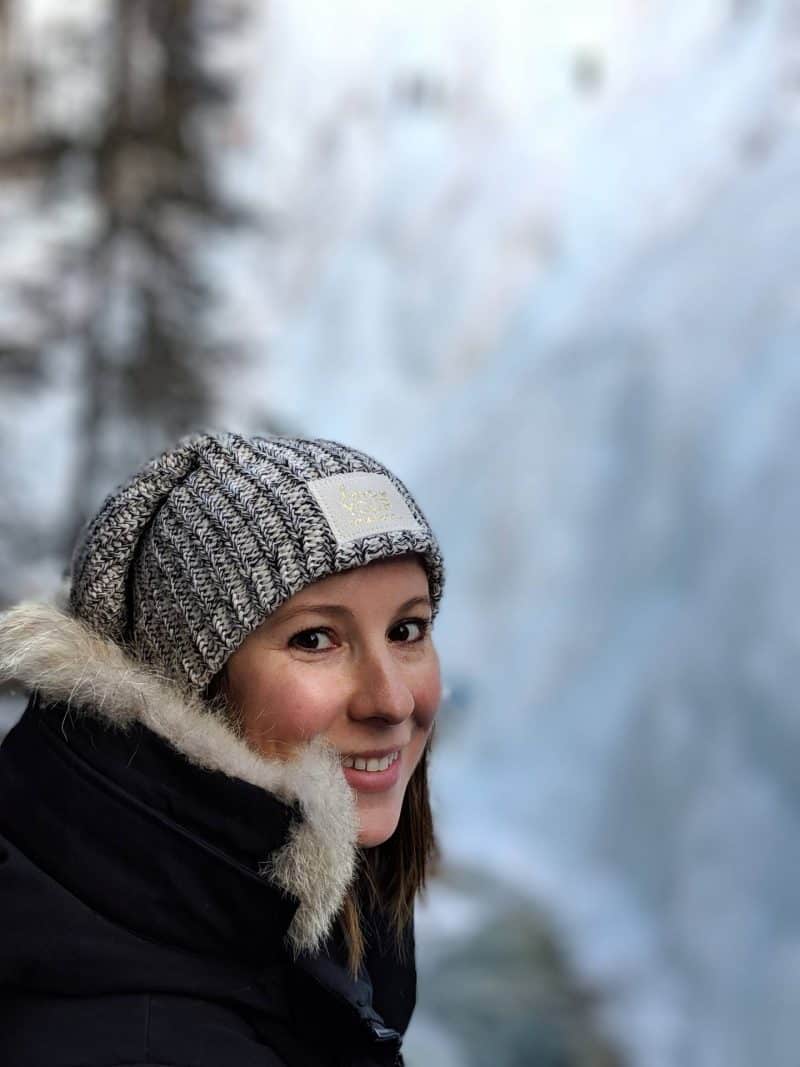 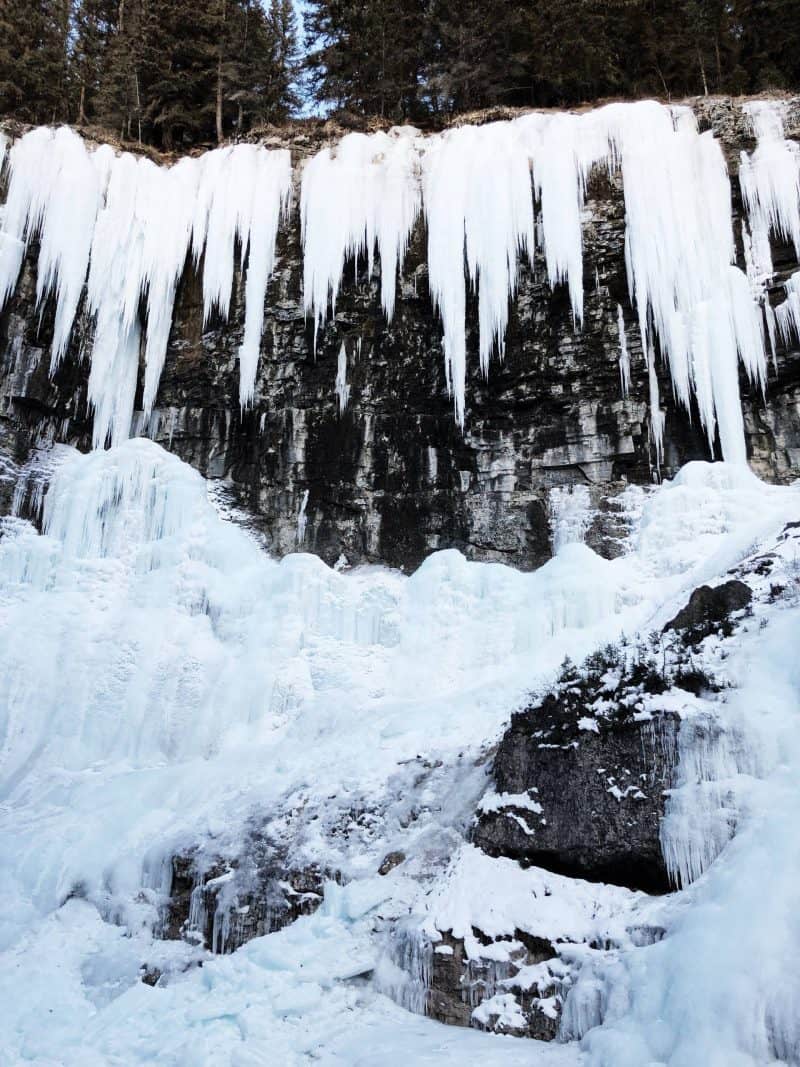 After lunch, we checked the weather and realized that our first day was going to be the best day to ride the gondola to the top of the mountain. Travelers recommend only paying and heading up if the weather is clear, so since the following day looked to be more cloudy, we decided that this was our shot. There is a live camera feed located at the base so you can see what the view looks like from the top to decide if you want to head up or not.

We booked at the gate rather than doing it earlier and saving a little money, so it cost $64 CAD per person to head to the top. It’s a little costly, but the views are beautiful and we barely spent any other money on the trip. The ride is about eight minutes and you arrive at the top of the mountain in a four-story welcome center. There are two restaurants with incredible views if you’re looking to hang out inside, eat, and observe, or you can head out onto the rooftop observation deck to get a better view.

We elected to walk the Sulphur Mountain Boardwalk, which is a 1 km walk to Sanson’s Peak with amazing 360 degree views of the mountains and the town far below. 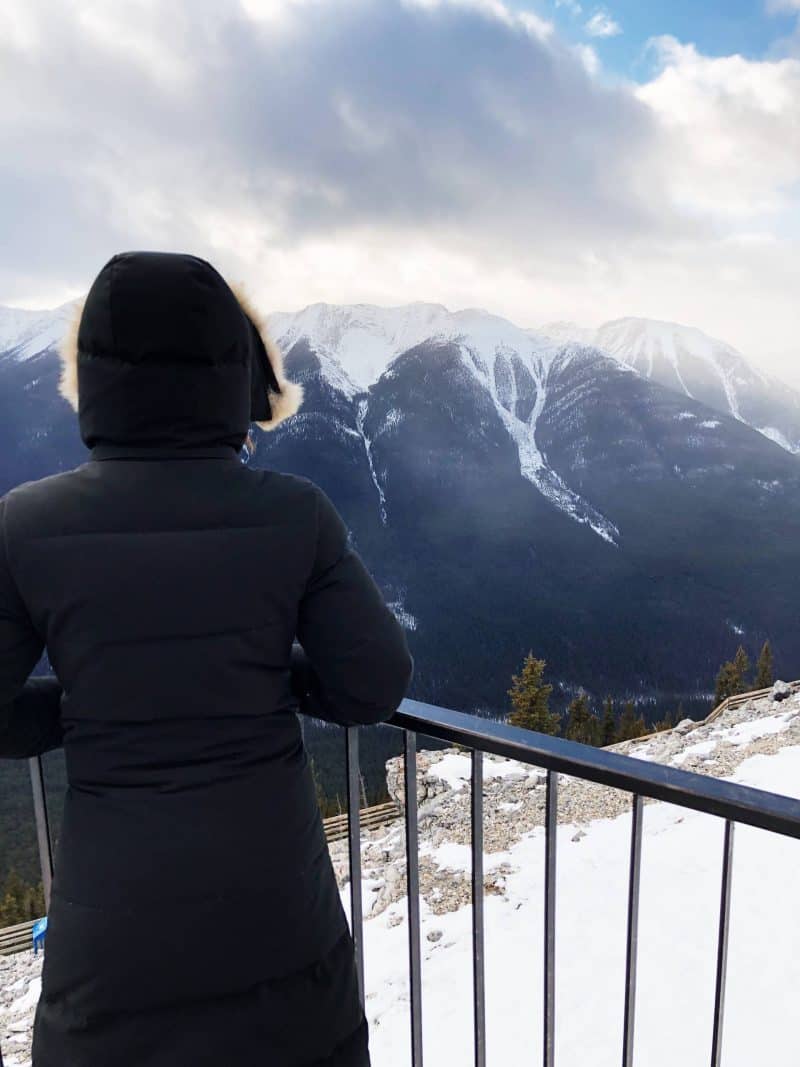 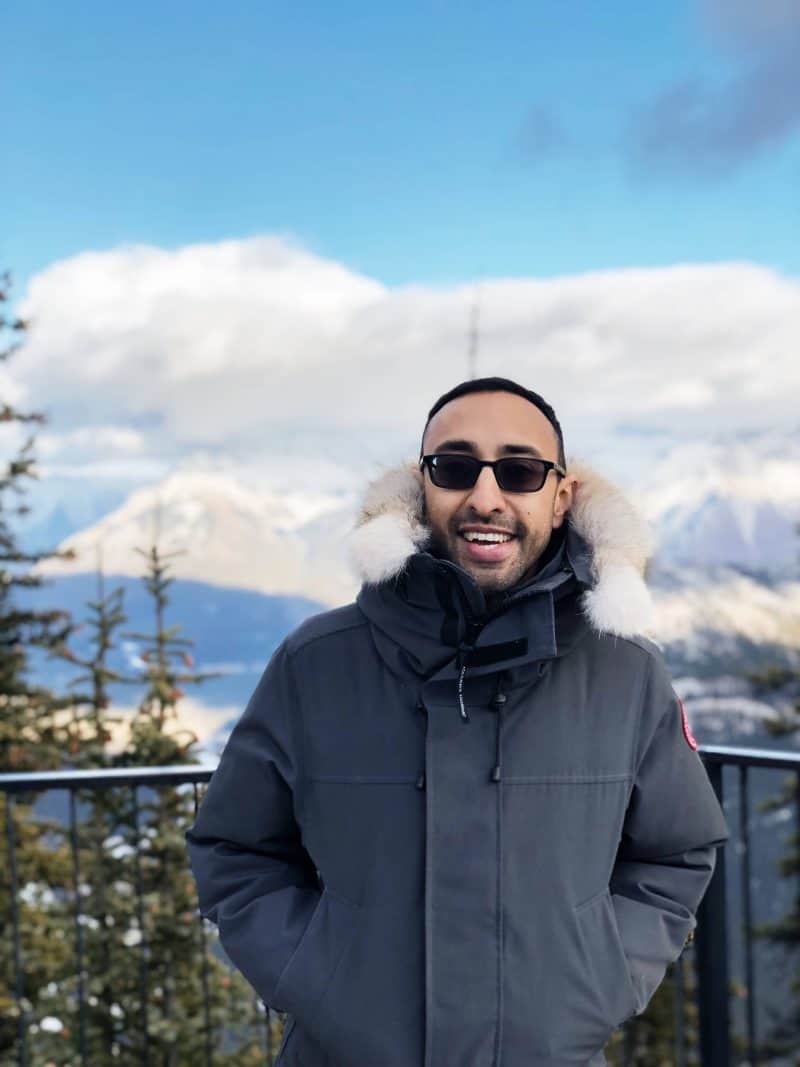 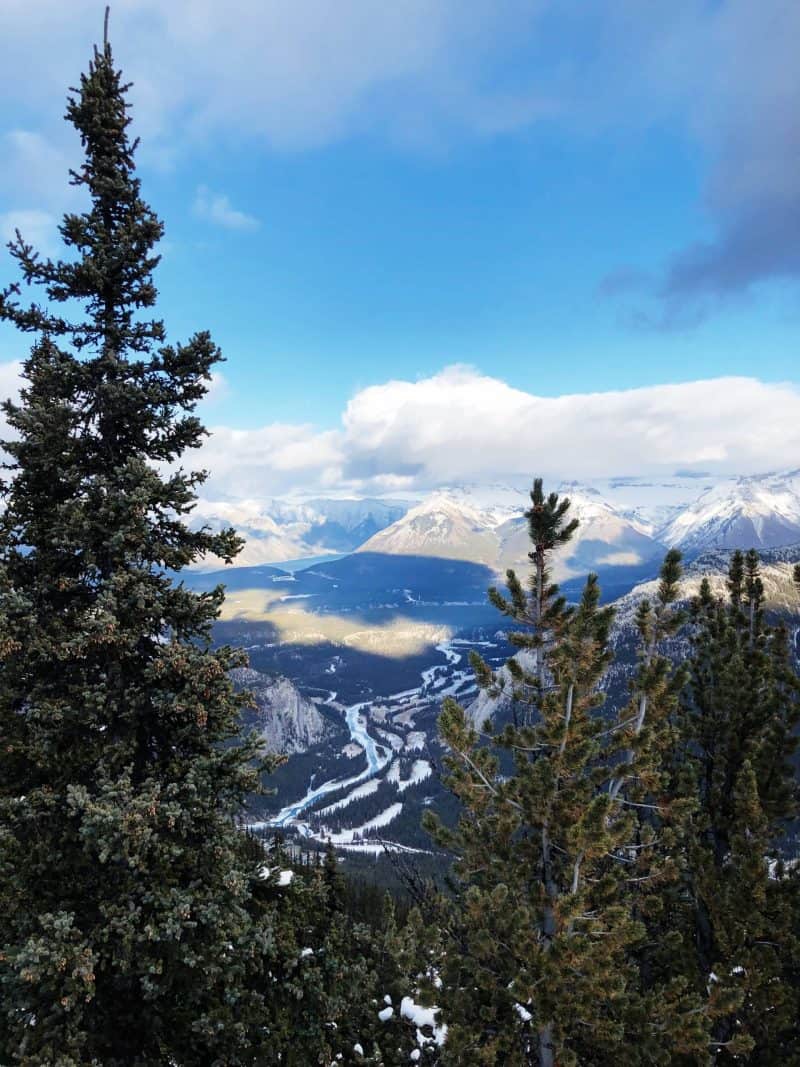 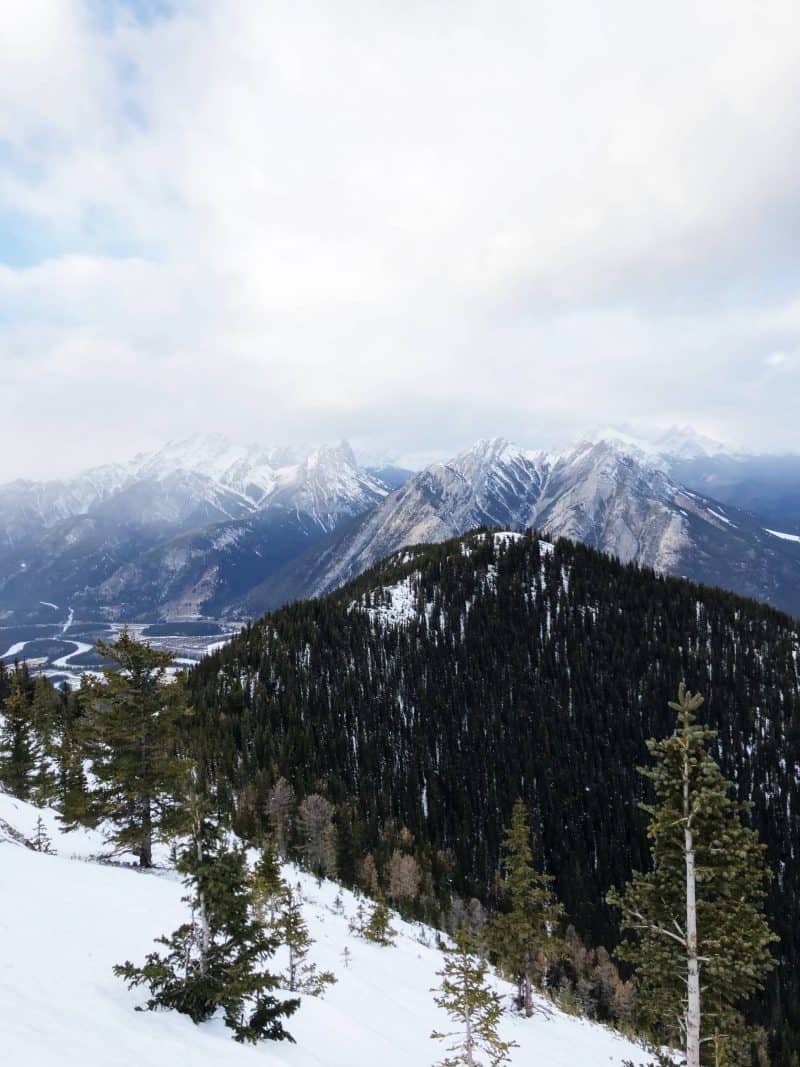 Our last day in Banff was spent on our gigantic breakfast and looking to see if there were any last minute places nearby that we should see before we leave. I wanted to find out what the blue water was that we saw the day before from the boardwalk, so I checked the map of the area and determined that it was Bow River. We drove to see if I was right and came across Bow Falls Trail, which may have actually been my favorite spot of the whole trip.

The trail runs right alongside a residential area, so it was clear, flat, and extremely easy for anyone looking for a leisurely stroll. We chose not to walk the entire thing and instead drove the car a little ways down the road to Bows Fall Viewpoint in hopes that there was something good to see. 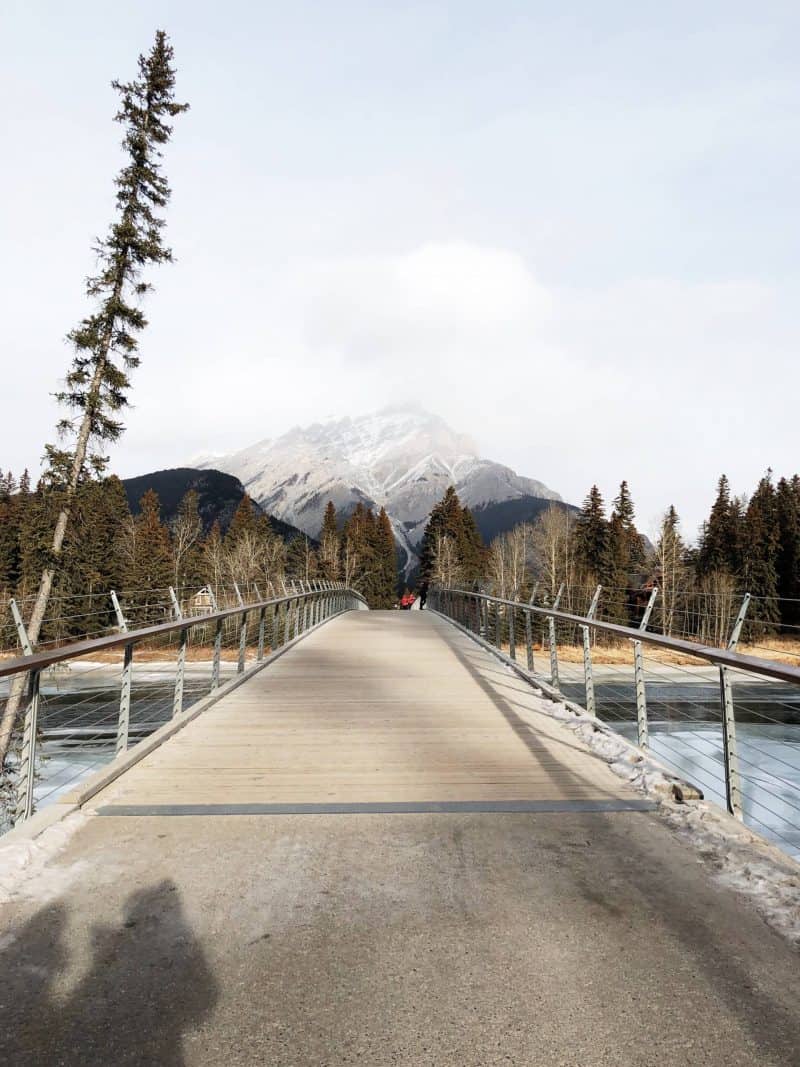 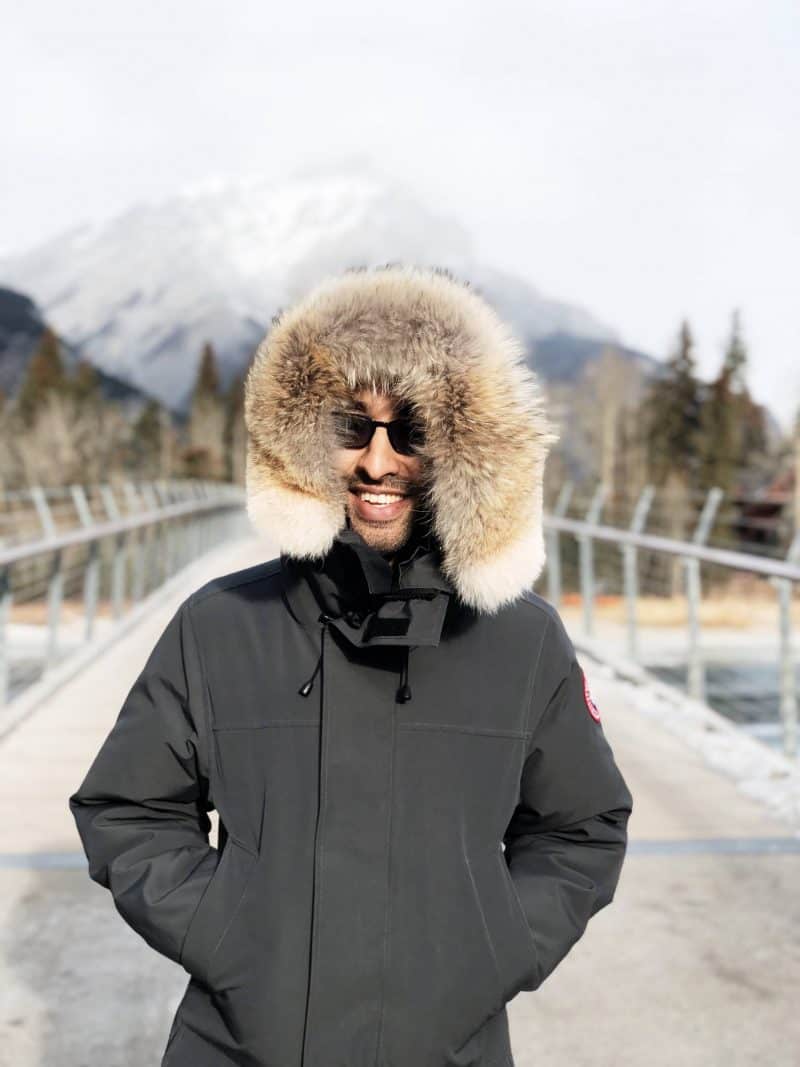 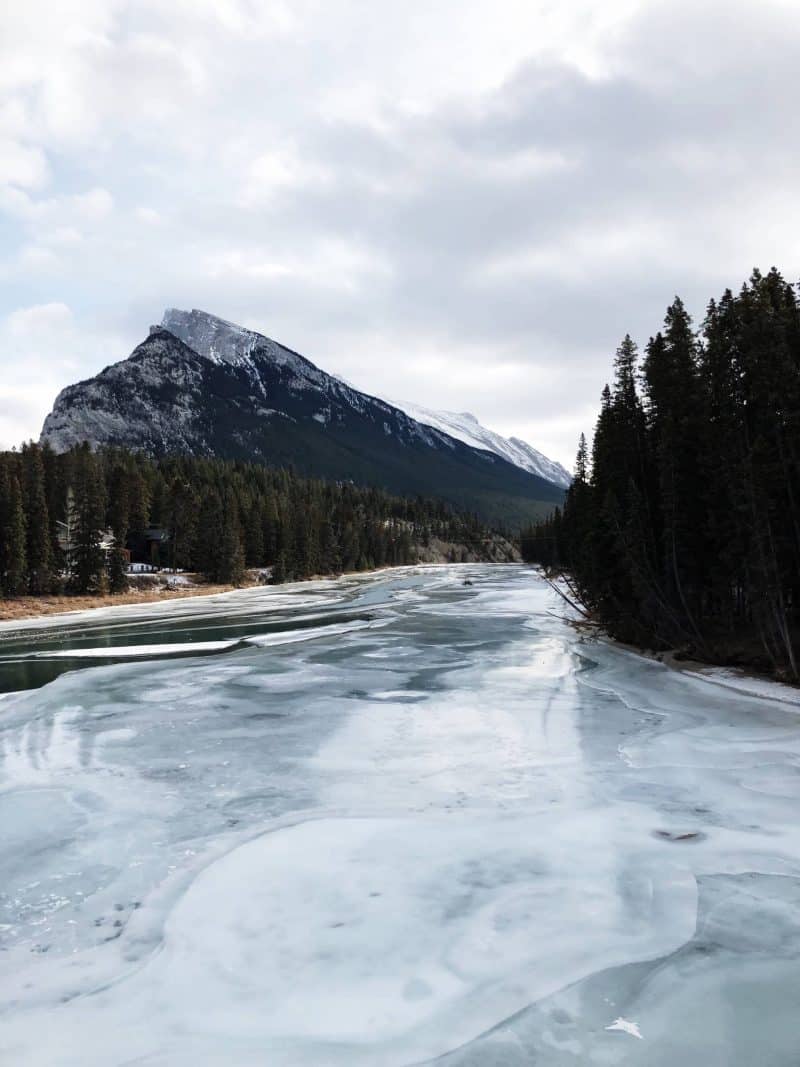 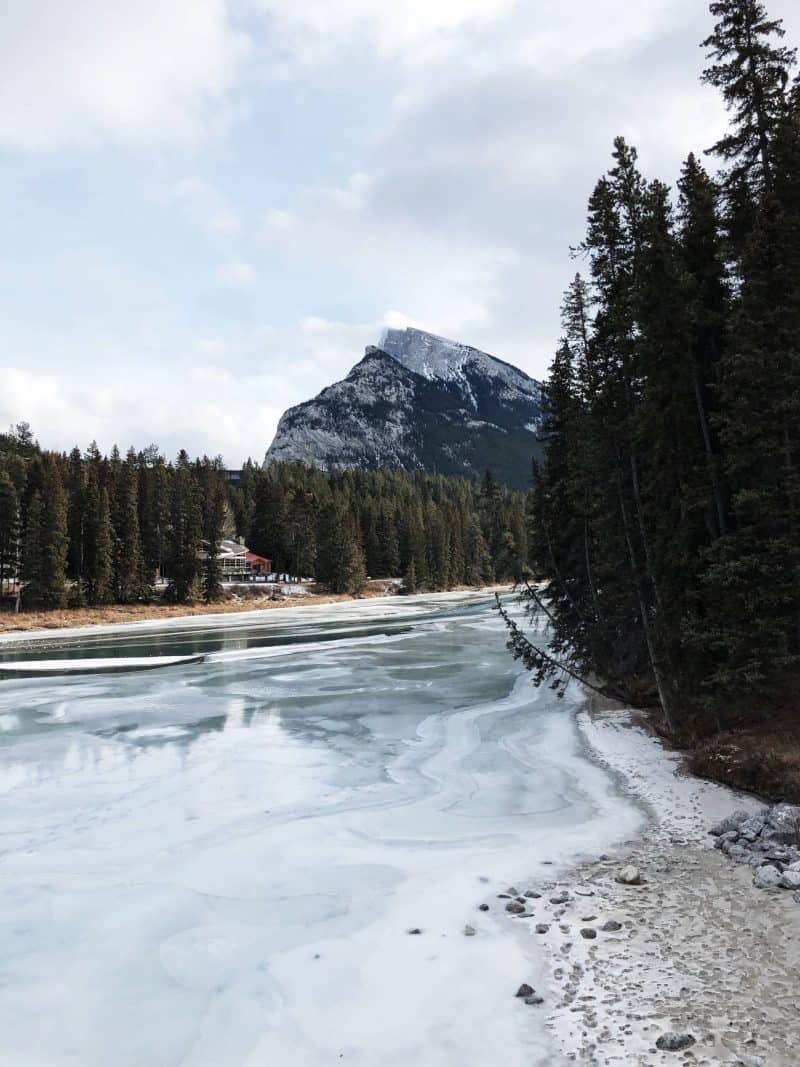 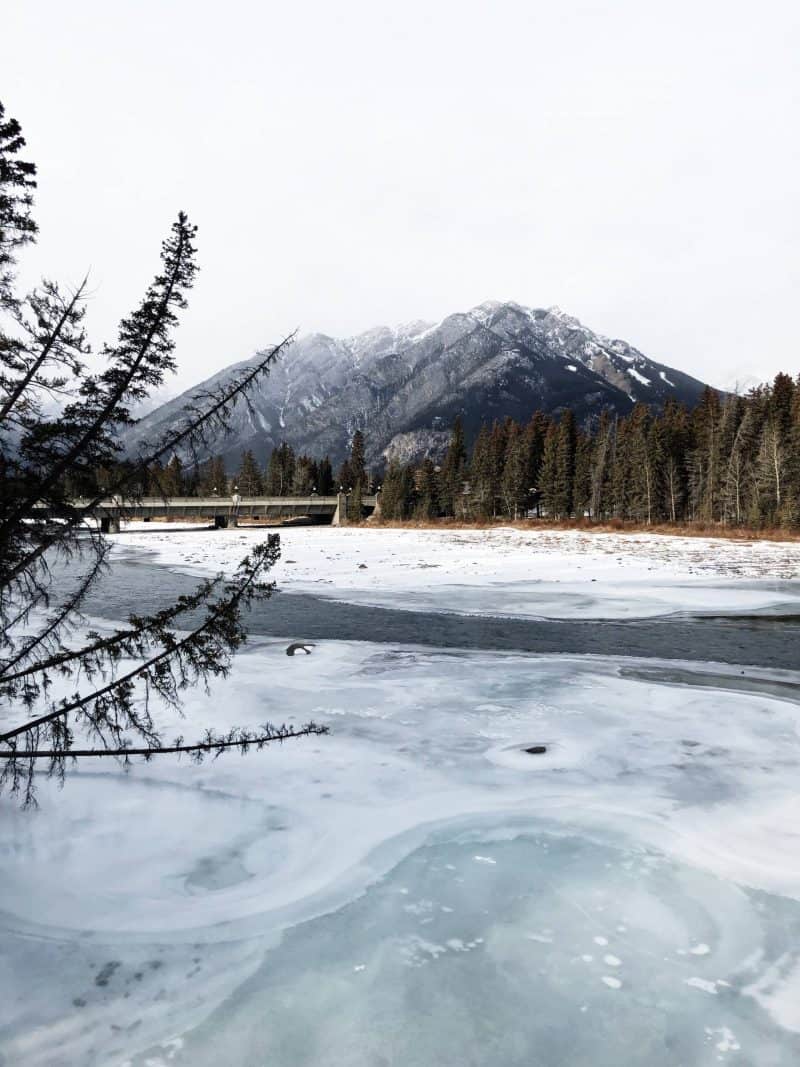 The viewpoint was incredible and a perfect mix of ice, trees, and water for me to want to stay there forever. We walked up part of the trail that we would have taken if we came all the way from the bridge, and that allowed us higher views from above the falls and over the river. 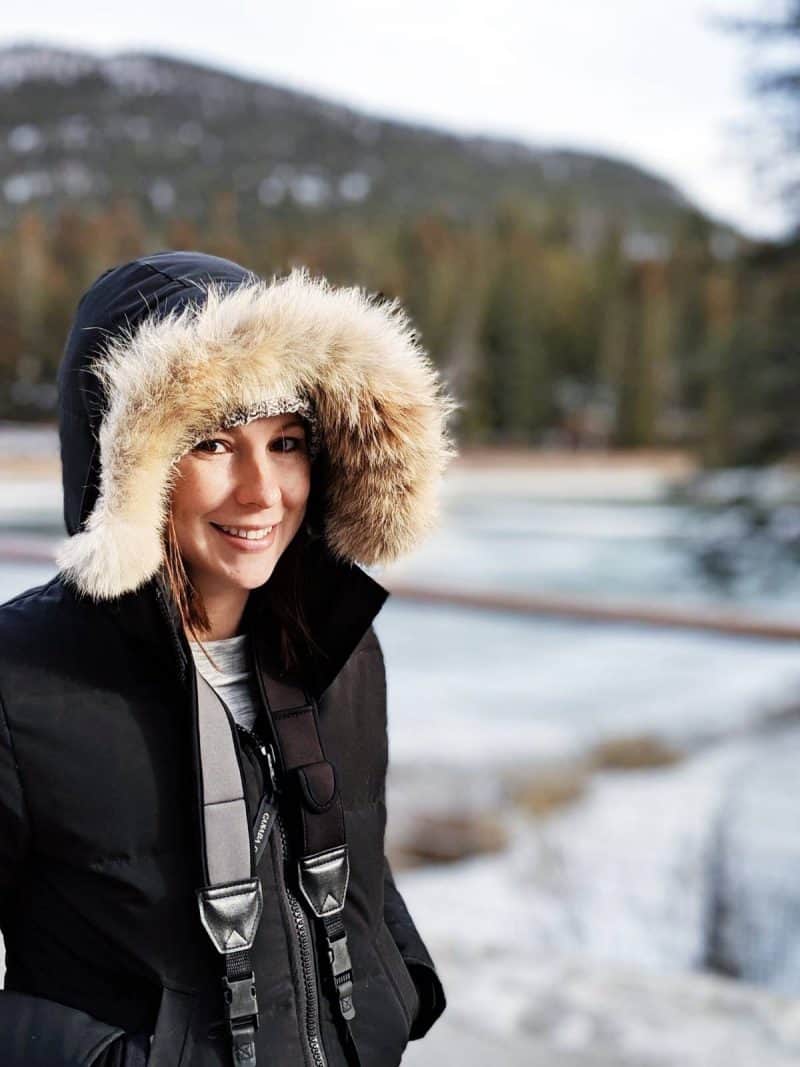 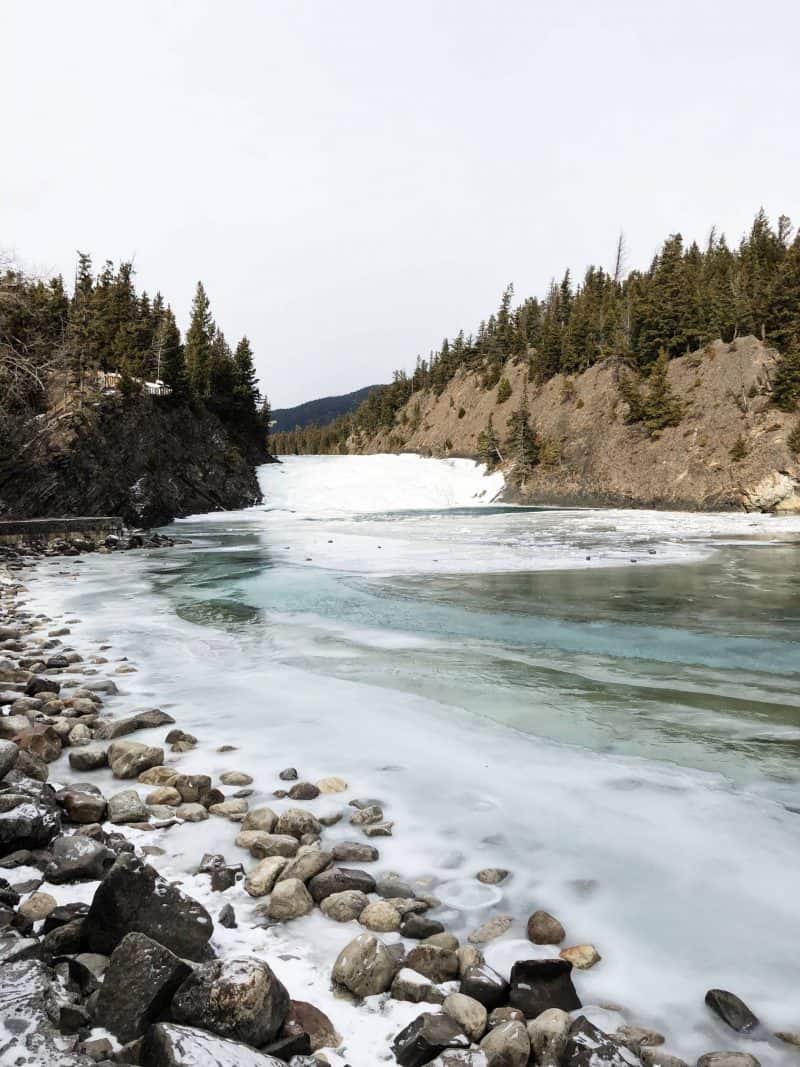 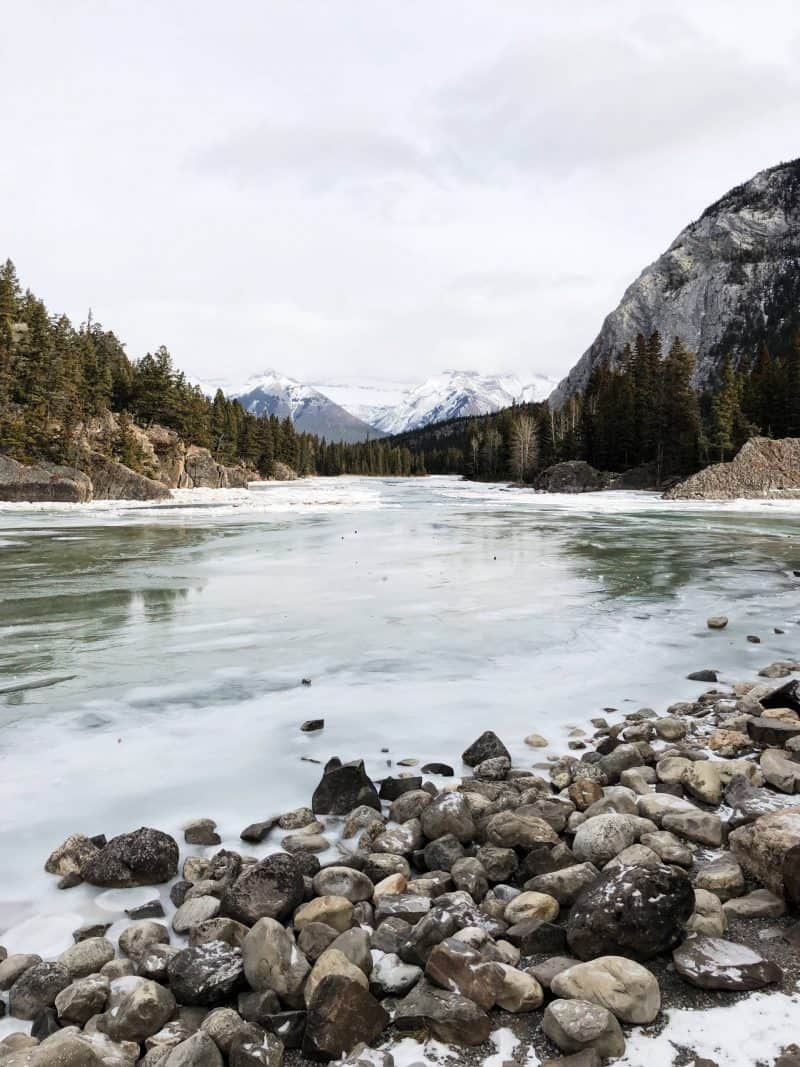 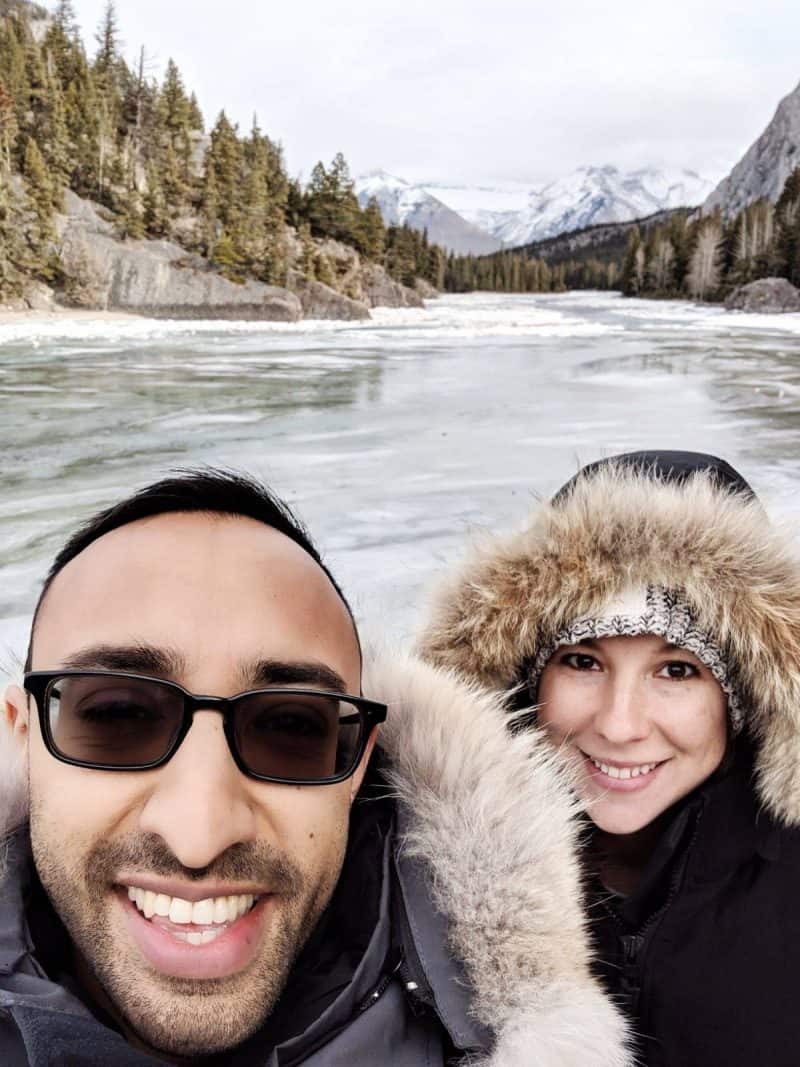 We snapped tons of pictures here and then started our drive back to Calgary in the afternoon. While my dream was always to visit Banff during warmer months, this trip turned out to be beautiful and mesmerizing in its own way. It’s also one of the few places that I want to return to after traveling to it once. If you’ve been, I’d love to hear your experiences in the comments!

11 comments on “Winter Adventures In Banff”