Chicago Spring Half Marathon - Erin's Inside Job Skip to content

Well it is Tuesday and I am still alive after running the Chicago Spring Half Marathon. My knees and calves bothered me for a couple days, but that’s to be expected after not conditioning my body to run that kind of distance. I am questioning my decision to sign up for a session at Hardpressed this morning, so check back with me tomorrow to see if I survived that as well…

Alright, on to what we have all been waiting for.

The race started off at Lakeshore East which is less than a 10 minute walk from the condo. I am so glad that Neil and I live so close because I didn’t have to worry about transportation and could wake up at 6 am.

The race started at 7 am and the corrals closed at 6:45 am, so Billy and I woke up at 6 am, grabbed a piece of cinnamon raisin Ezekiel bread, and headed out the door by 6:20 am.

We were a little early so I made sure to take lots of pictures.  I also did this to distract myself from the terror. 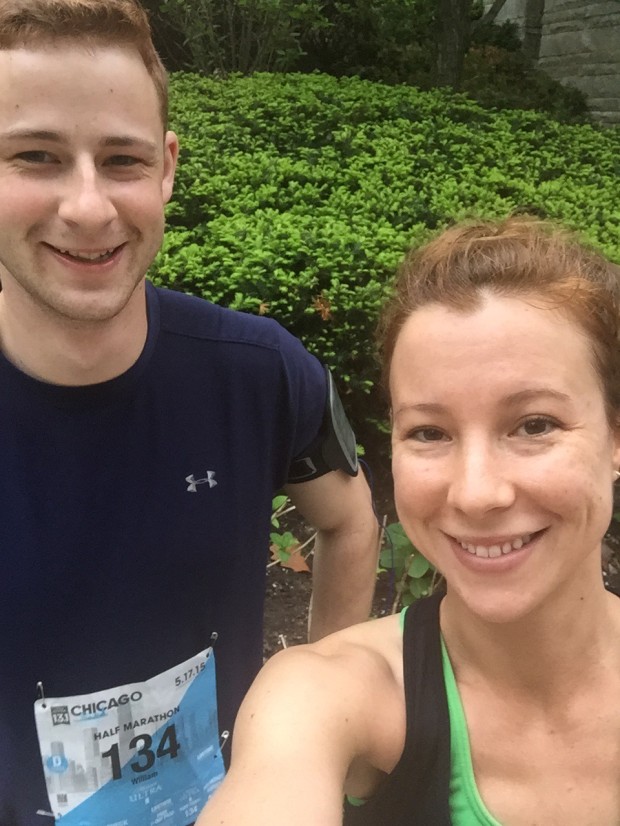 Here is a shot of Lakeshore East where the event stations were set up. At the end of the race this entire section was packed with people. 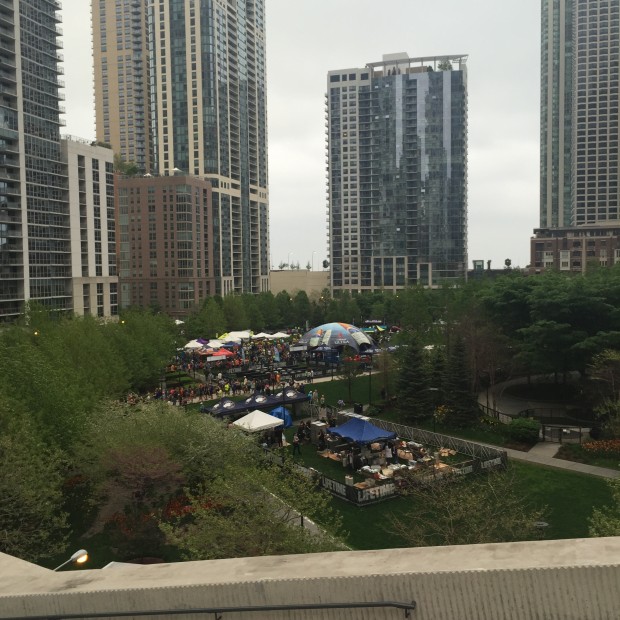 Another good thing about living so close is that I didn’t have to wait in these lines to use the bathroom.  I’ve always been confused by people waiting so long to go to the bathroom when there are usually stops along the race route. Maybe it’s because I run races for fun and don’t care if I fall behind a couple minutes, but this strategy is always my preferred one. 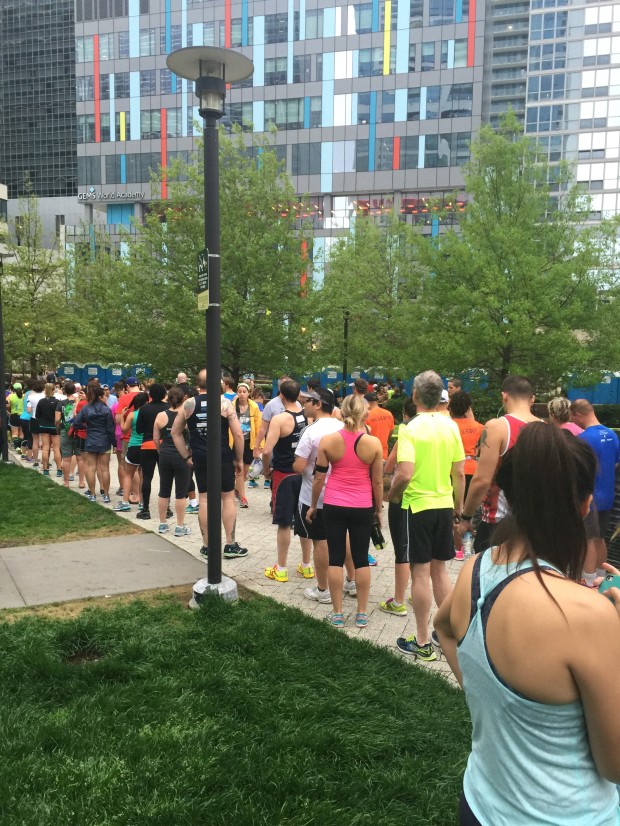 Another photo to postpone our walk to the start corrals. 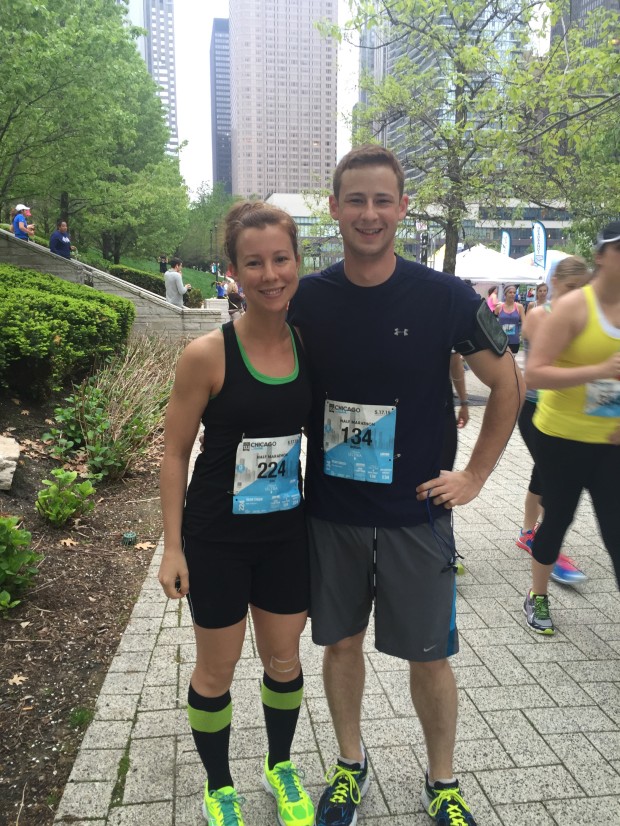 Billy and I were in corral D which estimated our finish at around 2 hours. When I ran the Diva’s Half Marathon last September I finished in 2:19:16, so I was aiming for a faster time but didn’t want to go too crazy.

The weather was horrible if you wanted to go out and explore Chicago, but if you wanted to run a half marathon it was PERFECT. It was overcast and temperatures were in the 60s. At one point in the race there was even some slight misting which helped keep us all nice and cool. 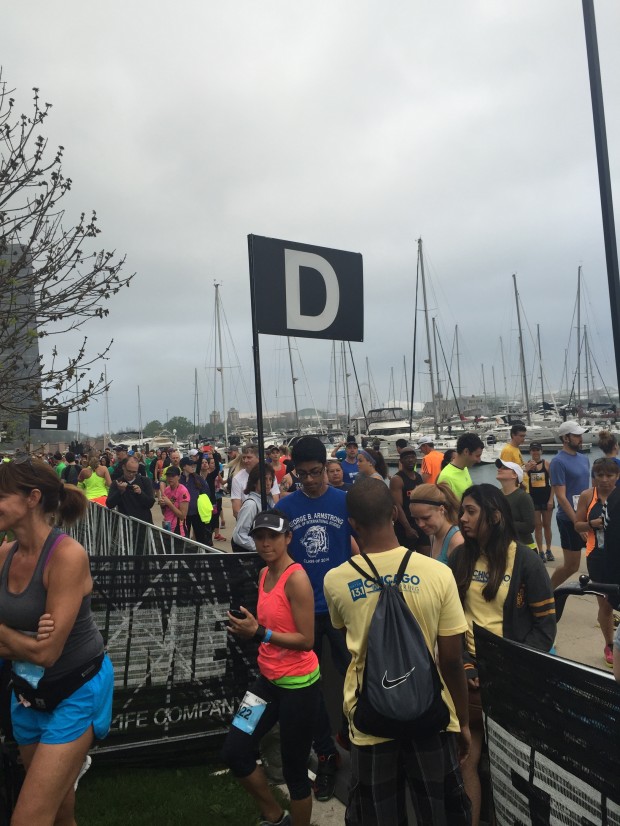 Still killing time. I knew that some of my outfit would match but apparently I was a very coordinated runner. I also ended up taping my knee like I had to do last year only because I wasn’t sure if it would start acting up. I felt some twinges around mile 5, but they didn’t stick around too long. 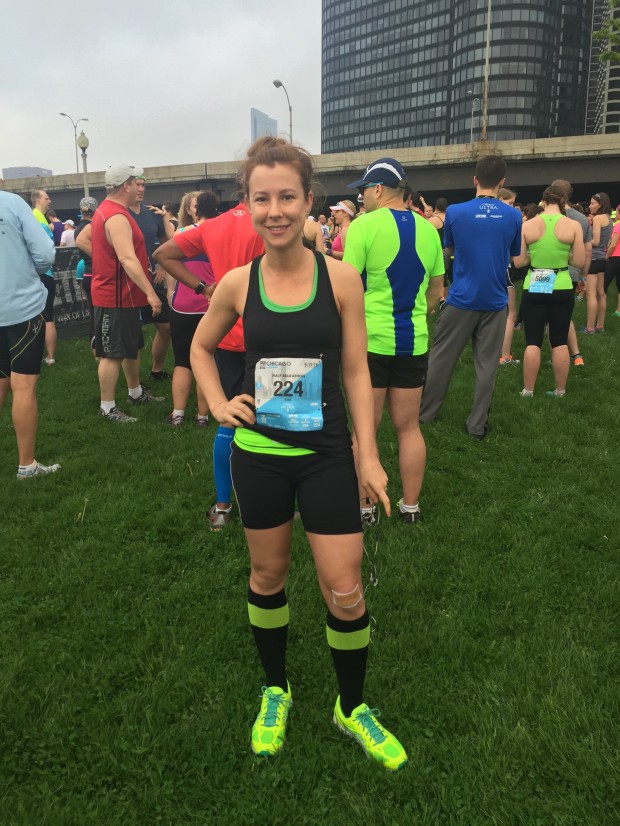 One final shot before we started. This is the realization starting to kick in. Also I love the girl in the background. She’s not too excited about this race either. 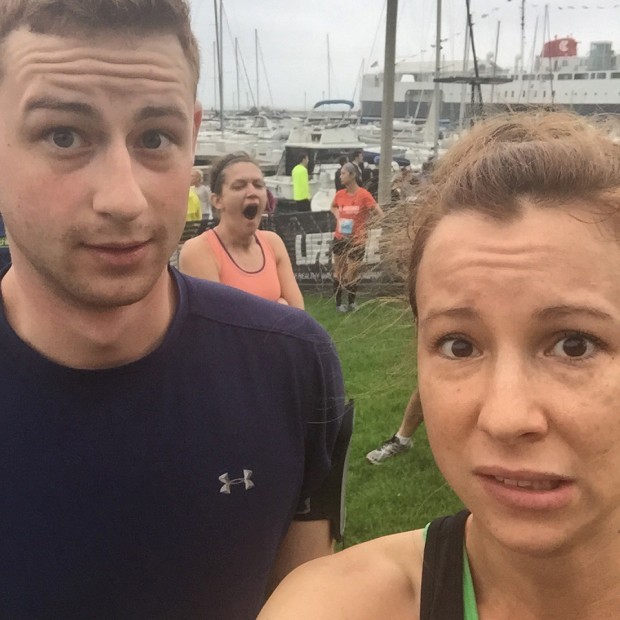 The course went south along the Lakefront Trail for a little over 6 miles and then looped back. I was excited about the course for two reasons: a) I have only run north on the trail so this would be all new scenery and b) it looped back halfway. I always like runs that stop and double back because I know that I am halfway done and that second half always feels faster than the first. Unfortunately this is one time when that didn’t happen for me, but that’s due to my poor training. 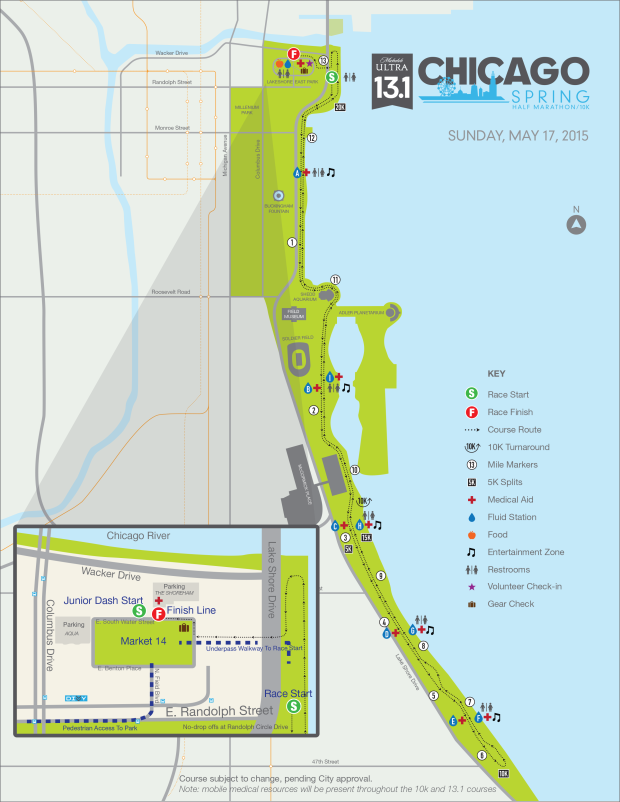 I felt great for the first half of the race. I didn’t listen to any music and kept a pretty consistent pace. Billy and I split pretty early and I took the lead in the beginning.

There were water stations and bathrooms approximately every mile which was great. I usually don’t drink a lot of fluids when I run but I figured I should probably hydrate. I chose mainly water because the Gatorade always messes with my stomach when I drink it. I tried again one time along the route in an attempt to convince myself I was crazy but nope, I still don’t like it.

We ran by the Shedd Aquarium, Field Museum, and Soldier Field within the first 3 miles of the race. I reminded myself that I still need to go to all three of these and that helped distract me along the way. We also saw the Adler Planetarium in the distance which reminded me of the computer game Myst if anyone is a nerd like me.

After the turnaround at the 10K mark I started to lose some momentum. Billy passed me soon after we turned around, but I was able to keep him in my sights for most of the second half of the race.  I decided to turn on my playlist and to my horror discovered that my headphones were only working IN ONE EAR. That made me want to stop and fiddle with them, but I listened to music in one ear until I started to find it distracting. Let me tell you, the Empire soundtrack does not sound the same without any bass.

The last three miles were not my favorite so I stopped to take some pictures of the city as we came back in. I also stopped to go to the bathroom and realized that all the sweat, humidity, and mist had left everything soaking wet. 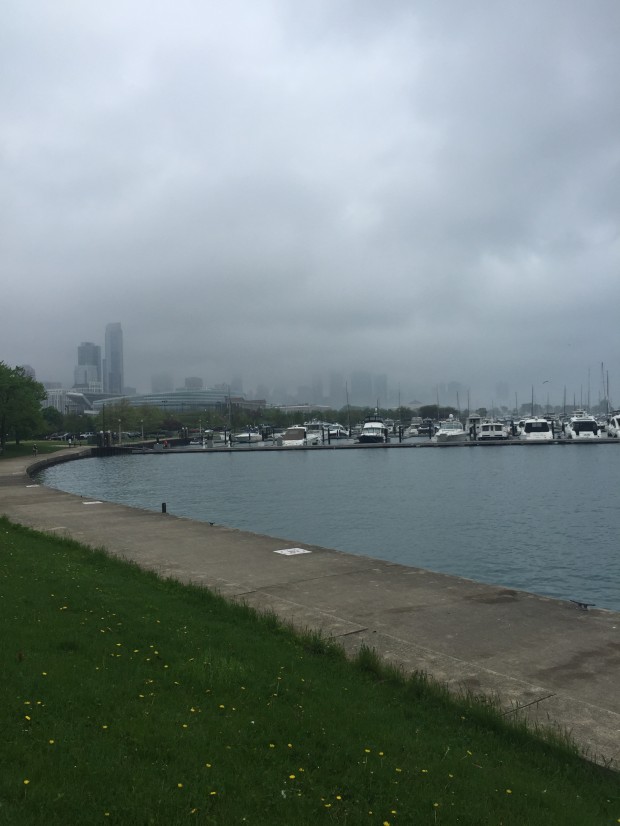 Although there could have been some more picturesque views, the skyline actually looked pretty cool with fog on both the bottoms and tops of the buildings. 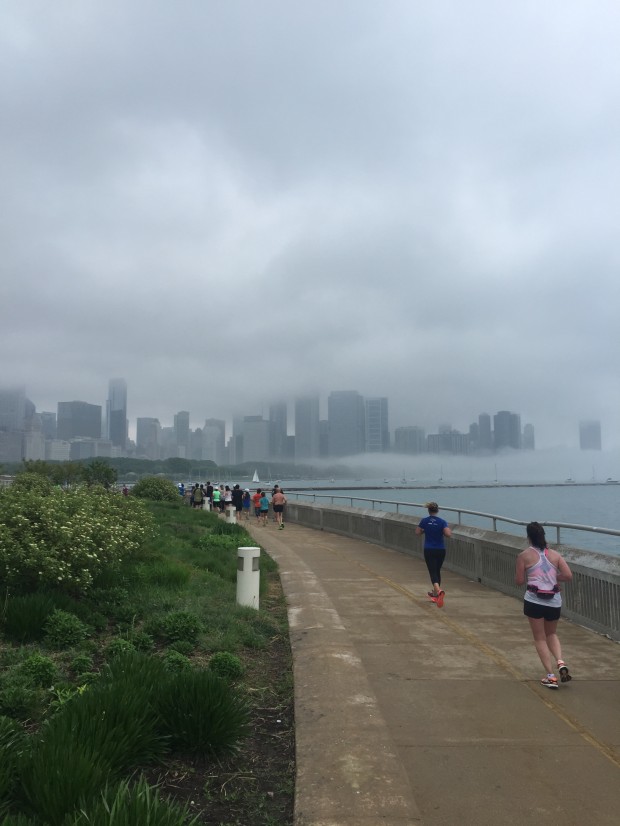 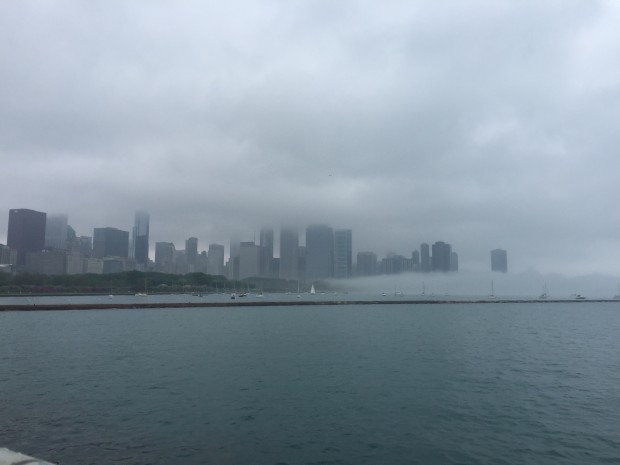 I slowed down to about a 9:45 mile for those last couple and ended up finishing in 2:08:08. Although I know it wasn’t my best performance, I still beat last year’s time by 11 min and 8 seconds!  Billy finished 3 minutes ahead of me which is awesome considering the furthest he had run before this race was 3 miles! I’m sensing a familial procrastination problem…

Billy and I were not hungry and were really just trying to get our legs working again, but we headed to the breakfast buffet anyway because we knew it was important to grab some food. The selection was way better than the typical bagel, banana, and apple that I have seen after a lot of races. 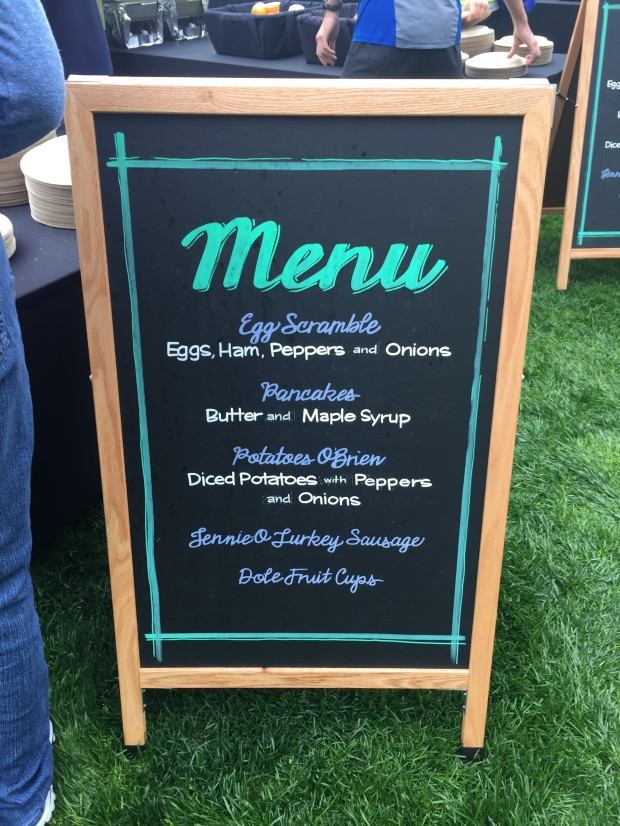 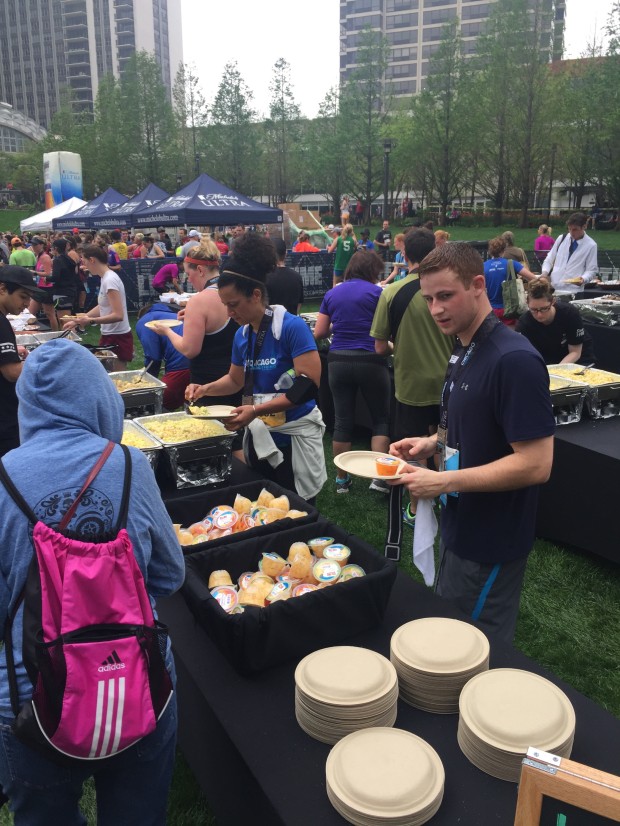 I ended up getting eggs, pears, and pancakes but only ate about half of it. I always have to force myself to eat after running because it actually kills my appetite until later. 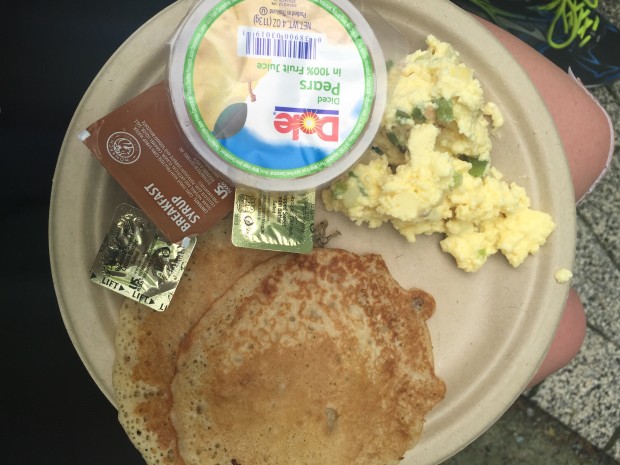 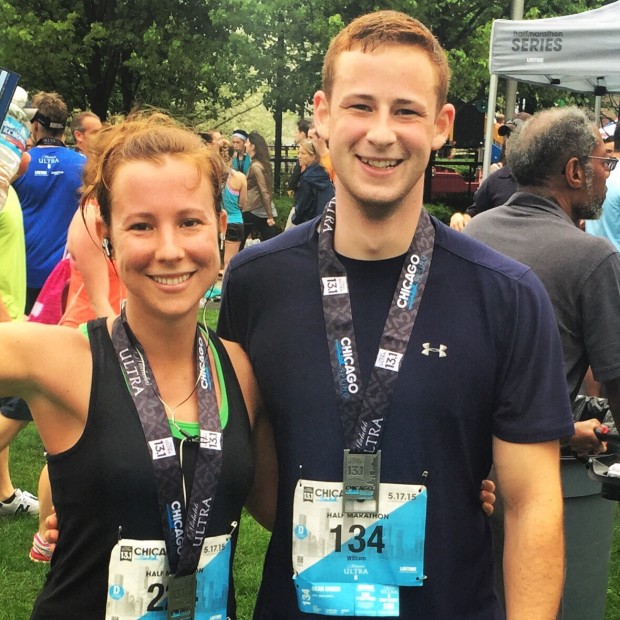 I am planning on signing up for the Chicago Half Marathon in September too as part of their Half Marathon Race Series. Really it just means that I will get a fancy medal, but that’s cool by me. Overall, the Chicago Spring Half Marathon was really well organized and I would definitely run it again!

The winners for the free week of Blue Apron meals are:

Congratulations and winners look for an email this morning for further instructions!

Linking up with Sara for Tried It Tuesday.

28 comments on “Chicago Spring Half Marathon”