Stop Playing the Victim and Learn to Succeed

The turning point for me came as I talked to a drug and alcohol counselor near the beginning of my jail sentence. It was our introductory meeting and she was gathering information about my case and why I was there. She asked me to go into some detail about the events leading up to my arrest, so I recounted how the police officer told me that I would be charged with a misdemeanor if I returned a stolen bottle of medication. I told her I complied, then found myself charged with multiple felonies.

“If he hadn’t lied to me, things would have gone differently,” I emphasized. I honestly believed this and can still see myself sitting back in my chair, arms crossed and contempt seeping into my voice.

After I finished my recap, my counselor pointed out that I spent most of my time blaming other people and never made mention of the fact that I was the one who actually committed the crime. Maybe it was the months I had been in recovery or maybe it was because I looked around and finally realized where I was, but it was at that moment that I was able to hear her.

My actions were no one’s fault but my own. They weren’t justified because I felt I deserved to be paid more (but never said anything) or because someone told me one thing and did another. I made the decision to steal from my place of employment and I was facing the consequences of those actions. The thing about consequences, however, is that they are more palatable when you can blame them on someone or something else. 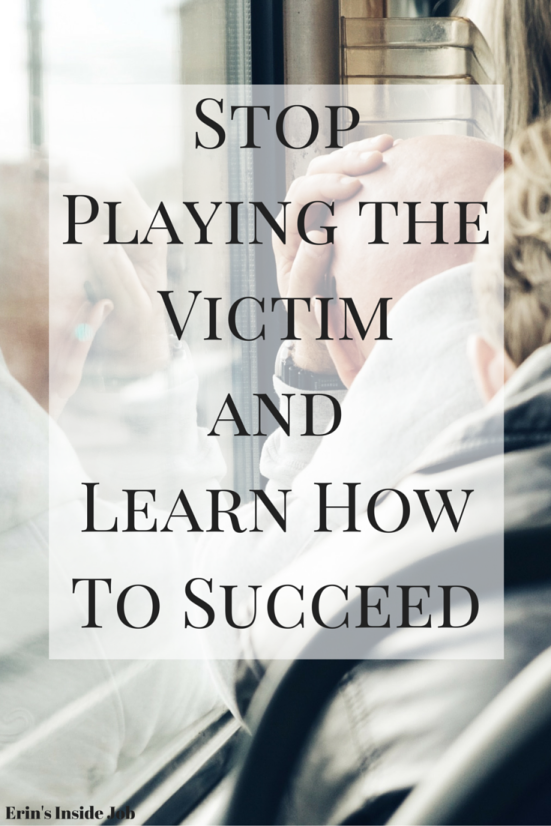 Playing the victim is an easy way out, but it’s often an unhappy one. Someone filling a victim role is often mistreated, manipulated, or able to turn those behaviors around on someone else. By claiming yourself as a victim, you effectively allow other people to determine how you want to be treated.

In countless relationships before I entered recovery, I put up with differing levels of emotional abuse. I took no responsibility for my happiness in these relationships and I stayed trapped in playing the victim. I analyzed what was happening and absolved myself from any part of it because I “did nothing wrong.” I wasn’t treating them poorly or talking negatively to them, so I sat comfortably (and sadly) in my corner and pointed as many fingers as I could.

My part in those relationships was to be responsible for what I would and would not stand for. By remaining silent and allowing the relationship to continue, I was telling my partners that I didn’t respect myself and that I had no problem with the way they were treating me. It was easier for me to feel sad than to take a look at myself and actually take a stand.

Another example of playing the victim arises in the workforce. I felt as though I was taken advantage of in several of my jobs in terms of being underpaid, working more hours that I wanted to, and simply not being appreciated. I would end up feeling resentful and look at every external circumstance that led to my current job state.

Rather than regale you with the super fun times I spent victimizing myself, let’s take a look at some things for you to realize and remember.

You Hold the Power

The lesson in the workforce (and life) is that no one holds your power except you. As easy as it is to say that your boss is unfair because you are working hours that you don’t like, it’s not going to change anything. Figure out when you want to work and how you want to spend your time and let your boss know that. No one is forcing you to work those hours or make that salary. If you don’t like it, do something to change it.

The same is true for relationships. If someone is mistreating you, you need to take responsibility for your own well-being and happiness and stand up for yourself. Playing the victim in a relationship is not going to change the situation or the other person. Only you are capable of changing what you will and won’t tolerate.

Take Responsibility for Your Choices

Playing the victim is often a way to preserve our own egos. If we try something and fail, it is easier to blame that failure on external forces than it is to actually take a look at the part we played. The problem with this course of action is that we are unable to learn from those mistakes and move on.

Learning to take responsibility for your choices can be a difficult thing to do. It takes courage and vulnerability to say “you know what, I tried and I failed, but I want to look at what I could have done differently so that I don’t fail going forward.” In my case, I had to sit with myself and say “yes, I was responsible for these actions and these are the consequences. Where do I go from here?”

Failing to take responsibility keeps you stagnant. Choosing to accept your choices can lead to radically different and empowering results. Which one will you choose?

Failing to take responsibility keeps you stagnant. Learn how to stop playing the victim!

19 comments on “Stop Playing the Victim and Learn to Succeed”