7 Life Lessons I Learned from 5 Years of Probation 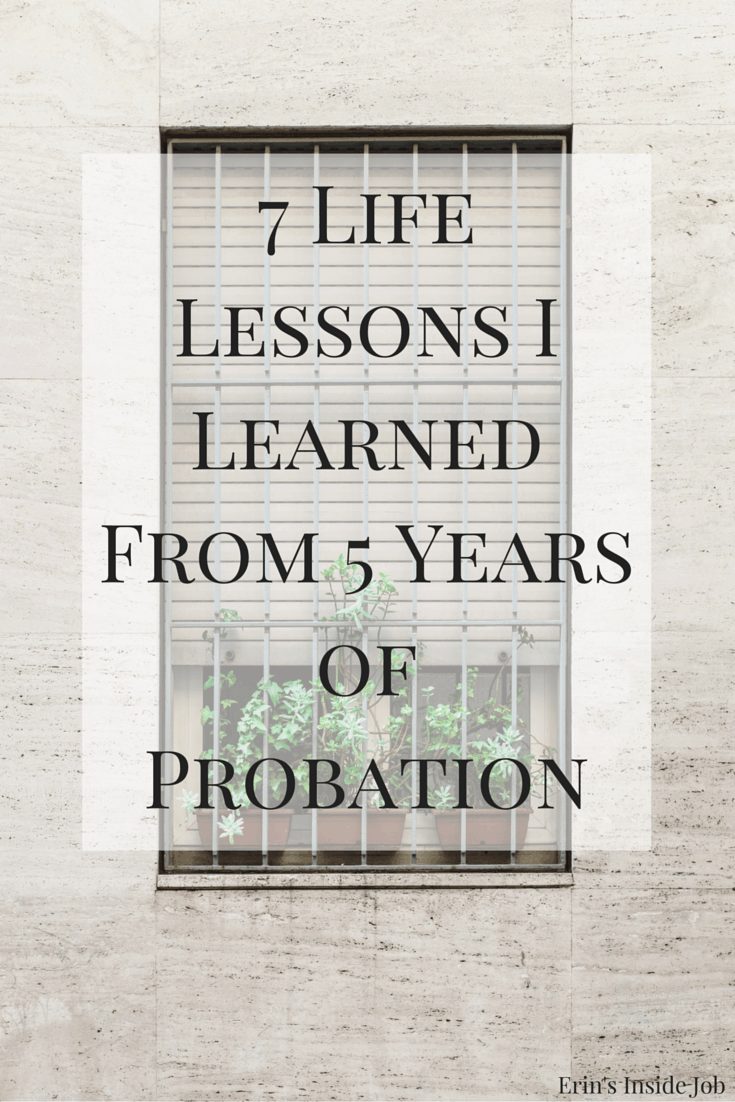 Tuesday of this week (May 10) marked 5 years since I was released from a 9 month incarceration. I was finally able to leave the detention center where I had spent almost a year of my life and work on rebuilding everything I had lost.

No idea what I’m talking about? Check out this post.

It was also the day that started several other components to my sentence, including community service, restitution, and 5 years of supervised probation. If, during any point during those 5 years, I was found in violation of that probation, either through a subsequent arrest or failed drug test, I would have to return to court to determine whether I should serve out the remainder of my sentence — 7 years in state prison.

For those of you unfamiliar with the court system (good for you!), all but 12 months of those 7 years were suspended, so I was sentenced to 12 months in jail but served only 9 due to good behavior (pat on back).

Probation is a tough thing. Not for people who are actually committed to turning their lives around, but for those who aren’t and for the probation officers who work there. If you are actively working on improving yourself and moving on from whatever crime(s) you committed, it’s more of a nuisance. There are frequent reporting visits, supervised drug tests where there are no doors on the stalls (woooooo), fees to pay for you to be supervised (??), no unapproved travel out of the state, and DEFINITELY no travel outside of the country (unless there’s an awesome officer who works to get you out for your honeymoon).

If I had stayed in Maryland for the entirety of my term, more than likely I would have been released early, but because I moved to a second county in MD, then VA, then Chicago, I was shuffled around between states and officers. Each new state meant I had to prove myself to a new person and since MD only had basic reports letting them know I was complying, they denied my (and two officer’s) requests for early termination.

I learned A LOT in these five years, and I can definitely say that some of those things came from my time in probation. In weekly thinking out loud fashion, here are some life lessons I learned from 5 years of probation:

On paper, I am a thieving criminal. Something got crossed when I moved to VA and suddenly my charges classified me as a felon even though they were misdemeanors in MD (note to self: make sure you’re not classified as a felon). This meant I had to give up a DNA sample and fingerprints as well. When I was released from jail and tried to pursue employment opportunities, I struck out for three months straight because all people were able to see were those words on a piece of paper.

It’s taught me the danger of labeling other people. Whether that be through stereotypes or a person’s life on a piece of paper, it’s never fair to the other person. Every person I know is a complex character and it’s important for me to give others the benefit of the doubt or actually get to know them before labeling them and writing them off.

I can’t tell you how many times paperwork got messed up when moving states or even within one office. I made sure to save EVERYTHING related to probation, from copies of money orders to receipts. On several occasions I was asked for proof that I had paid my restitution (over $3000), and the only proof I had was one copy of all the money orders that were used.

I may be a little paranoid after this ordeal, but I make sure to save everything that I may need in the future until I’m sure that enough time has gone by before I can trash it. You can catch me on a new episode of Hoarders next week.

3. You won’t always get your way

99% of my travel requests were approved because I had proven that I wasn’t a flight risk and had a record of good behavior. Shortly after moving to Chicago, however, I had to cancel a trip to India because I was in a brand new state and hadn’t even been assigned a new officer yet. In fact, the man on the phone told me that “I was a criminal who was technically still in jail but lucky enough to be living outside its walls.” Thanks dude.

I learned that some things are just out of your control and you have to be able to make the best of them. It turned out to be a blessing in disguise because we were also closing on our condo during that same time and if we had been in India we wouldn’t have been able to get them all the documents they needed.

Even with all the judging that’s been done to me, it’s still hard to stay neutral sometimes. I would find myself constantly annoyed at the people who showed up to probation and behaved disrespectfully. I overheard phone conversations where people failed to show up, made excuses, or were having new arrest warrants issued. Some of my first thoughts were that these people had no desire to change and would remain in the system for who knows how long.

The truth is that I have no idea how willing these people are to change. Just like recovery, sometimes you don’t get it on the first try. It’s so difficult, but also so important, to try and support and encourage people to do the best they can. I have to constantly work on not judging people since I have no idea what they are going through in life.

My last day of reporting, I was waiting in the waiting room and was sitting Indian style on a bench since my legs were too short to reach the floor. Another officer came down, glared at me, and snapped for me to “put my feet on the floor.” It was one of the most disrespectful ways I’ve been treated and I was immediately filled with shame and rage. Even with a clean probation record and the respect I showed for others every time I reported, I was talked down to like a child.

Not everyone in this world is going to like you. I didn’t understand this concept until a few years ago, mainly because I was an obsessive people-pleaser who tried to find any way to make others happy. If someone didn’t like me, it meant I was doing a bad job and was a failure. It finally clicked that a) that behavior was absurd and b) with so many people in the world, you can’t get along with ALL of them. There are some personalities that I don’t mesh well with and that’s fine. Make some friends, keep them close, and go about your day.

6. Take responsibility for your behaviors

I learned this more when I was in jail, but every time I was faced with some facet of probation, it helped reinforce it. I learned that unless you take responsibility for your behaviors, you won’t be able to move past them.  For the longest time, I was a perpetual victim, pointing the finger and placing the blame on everyone else but myself. This left me feeling resentful, sorry for myself, and certainly not ready to move on from whatever or whoever I was blaming.

Every time I had to do something I didn’t like through probation, my first instinct would be to throw a tantrum and find a way to be angry at the system. After that accomplished nothing, I remembered that I was in this situation because I had betrayed trust, stolen A LOT, and put others at risk. All me. It had nothing to do with anyone else. As soon as I remembered that I was able to show up and work through each situation.

Related: Stop Playing The Victim and Learn To Succeed

OMG — It may not seem like there will EVER be an end to a difficult situation, but time passes and so do life events. I honestly didn’t think it would be as big of a deal when I was released from probation, but it’s a wonderfully freeing feeling. No matter what you are going through, as long as you keep going forward, you’ll get out on the other side. It may be harder to trudge through and those steps may get smaller, but keep taking them and I promise there will be an end.

FREEDOM! Check out these 7 life lessons to be learned from 5 years of probation #recovery #addiction