5 Days In Isla Mujeres - Erin's Inside Job Skip to content

I’m back in business after getting home Monday evening. Neil and I spent 5 days in Isla Mujeres, a small island off the coast of Cancun, Mexico.

It was my first international trip since being let off probation and it was marvelous to not have to submit a travel request, take the train out to a probation office, spend 1-2 hours of my day there, maybe take a surprise drug test, and then leave with a piece of paper that lets me leave the state.

I was able to leave the country for my honeymoon to the Maldives and Dubai, but I have no idea how that happened. 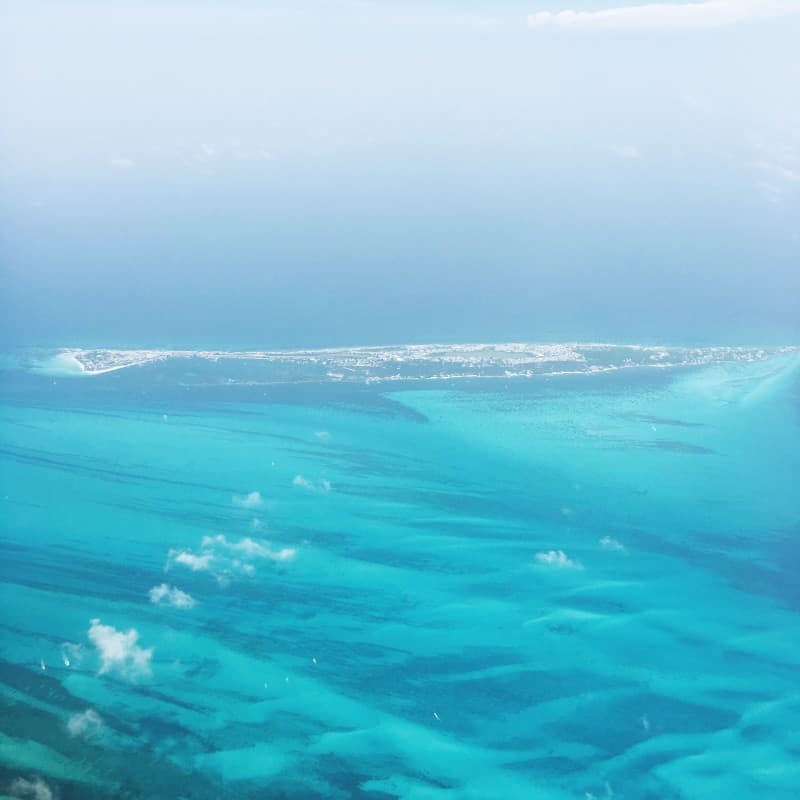 ANYHOO, I mentioned in a previous post that we almost canceled our trip because of the forecast. While it stayed overcast most of the days, it was actually a great trip and I got just enough sun.

We left Thursday morning and landed in Cancun around 1 pm. We had set up transportation previously to pick us up from the airport and drive us to the ferry which took about 30 min. We had some issues finding an ATM in order to take out pesos, but soon we were on our way to the ISLAND OF WOMEN.

Sidenote: If you travel to Mexico, take out pesos. You can pay in dollars, but they screw you on the exchange rate and you end up paying more. Also avoid using credit cards unless you want to get a new one.

The ferry took about 15 minutes from Cancun, and from there we simply walked up the street until we came to our apartment. We rented a studio that we found on Trip Advisor called Color de Verano and for the entire time it only cost us about $350. We stayed in the bottom left apartment and it was more than enough room for us since we spent most of the days out in the world. 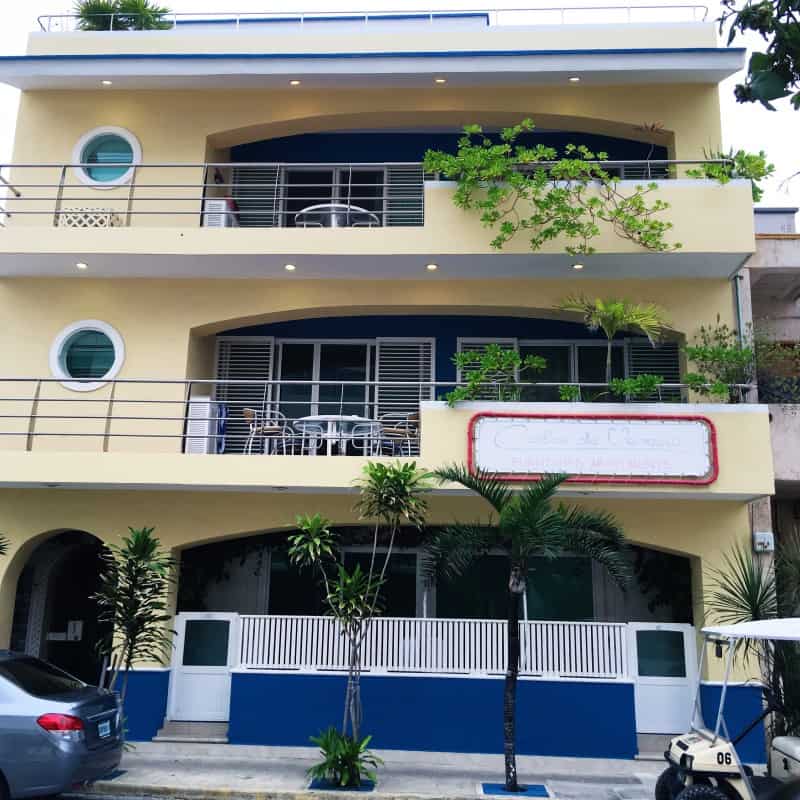 We were starving when we got to the island, so we grabbed a quick snack and then headed to the beach. This and the last day were the only days of direct sunlight, so we made sure to take advantage of them.

This beach was literally right across the street. 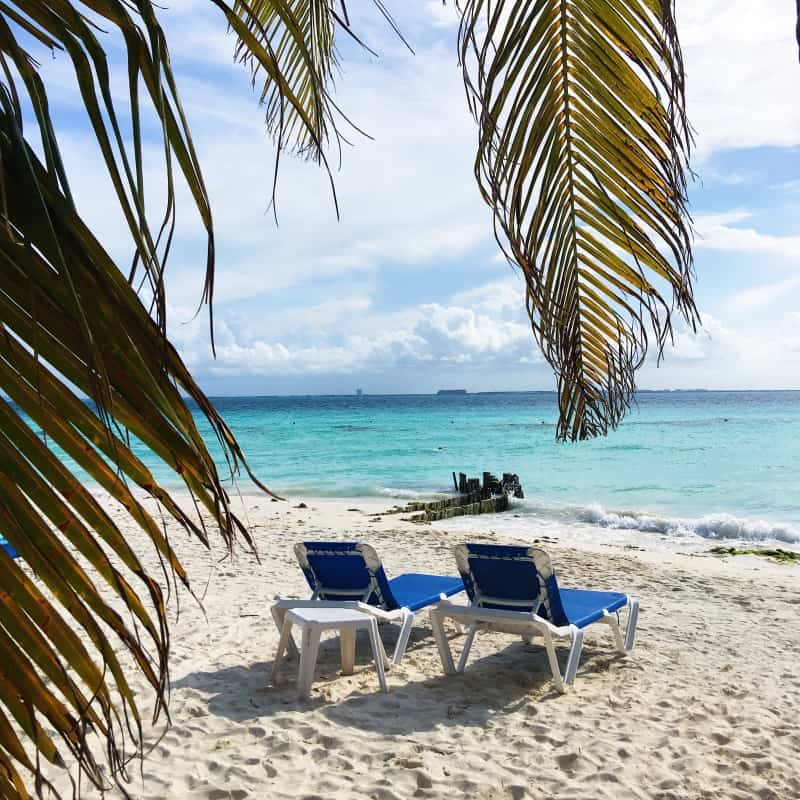 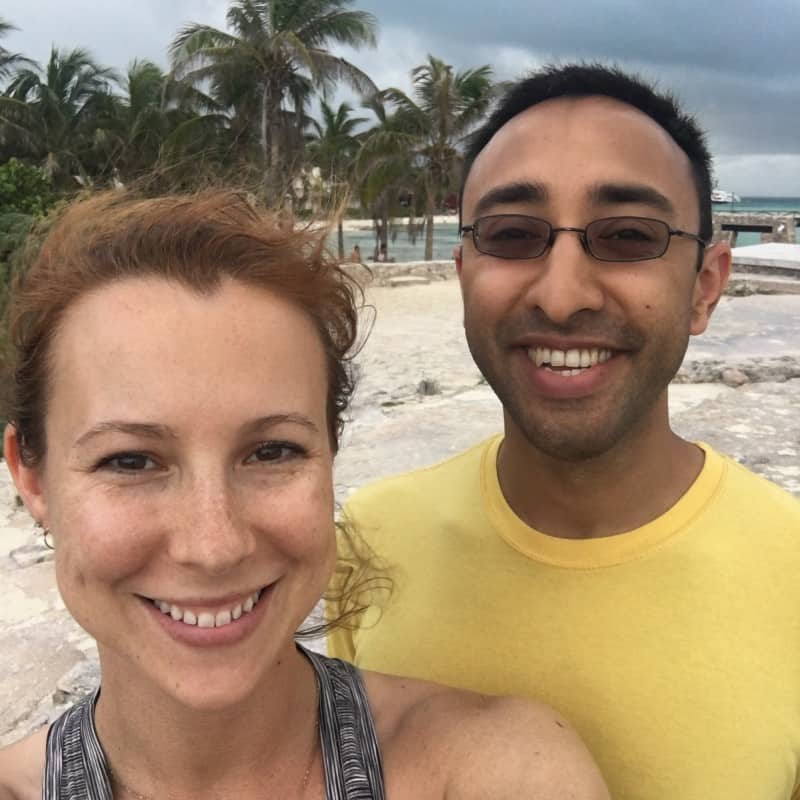 There are several streets with shops and restaurants, but this is a shot of the main street where we spent most of our time and which is also blocked off to cars and other forms of transportation. 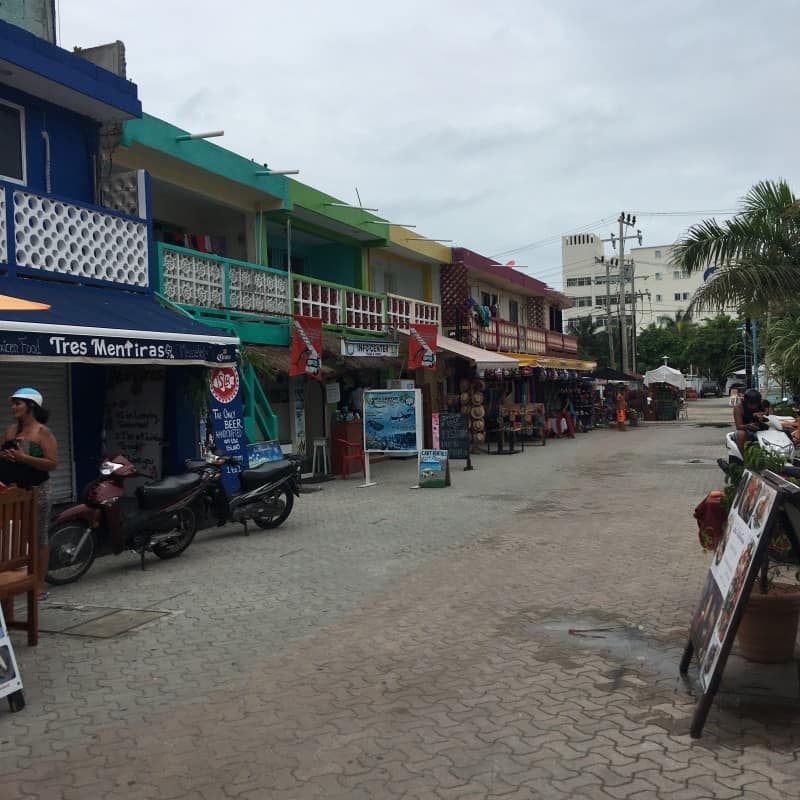 Here is a monkey tree. 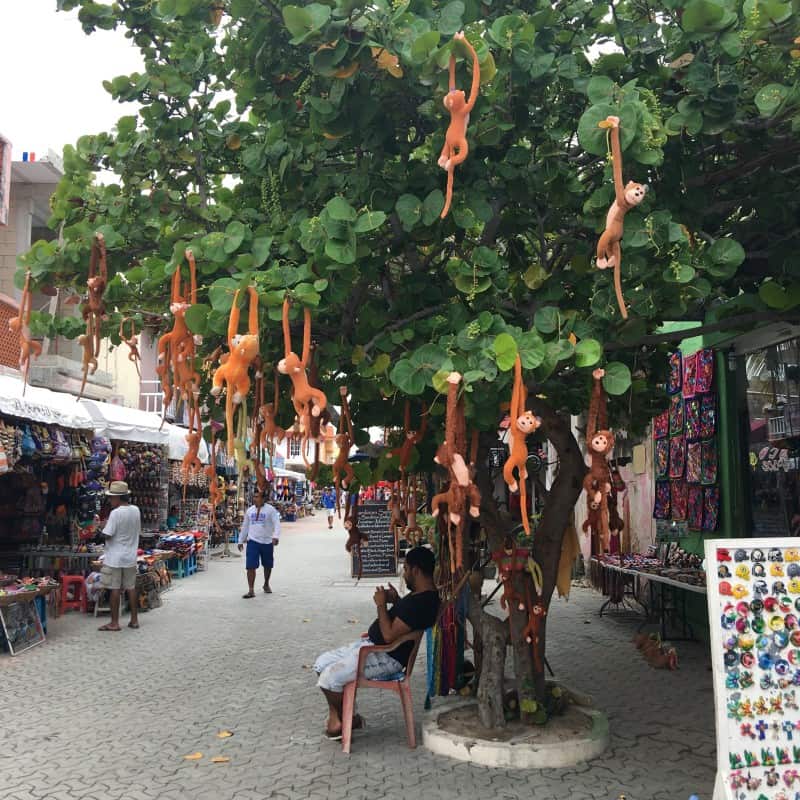 I went a little crazy with all the colorful walls. I was in Instagram heaven.

Friday morning we had breakfast at a place called Lola Valentina. I got an egg, cheese, and veggie croissant and realized I did not want that heavy of a breakfast again. 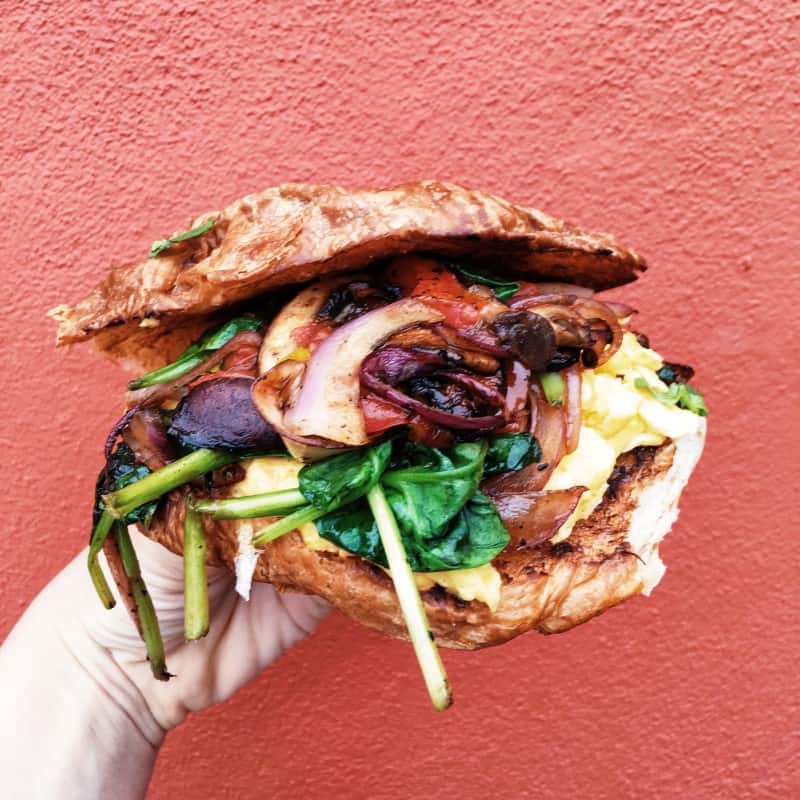 There were a bunch of stray cats and dogs in the streets which I LOVED. I talked to them and tried to pet them all and Neil told me to leave them alone. Then he pet one!! Unacceptable. After that, I was a petting fool. 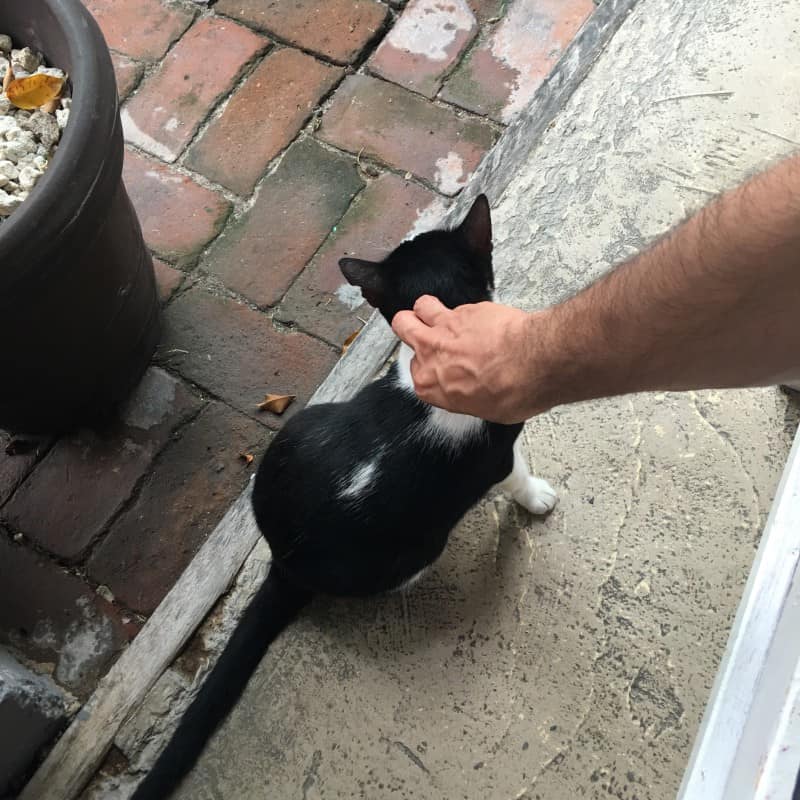 For lunch we headed to a place called Rooster’s, which is extremely popular among the tourists. Here’s Neil’s fancy savory waffle sandwich. 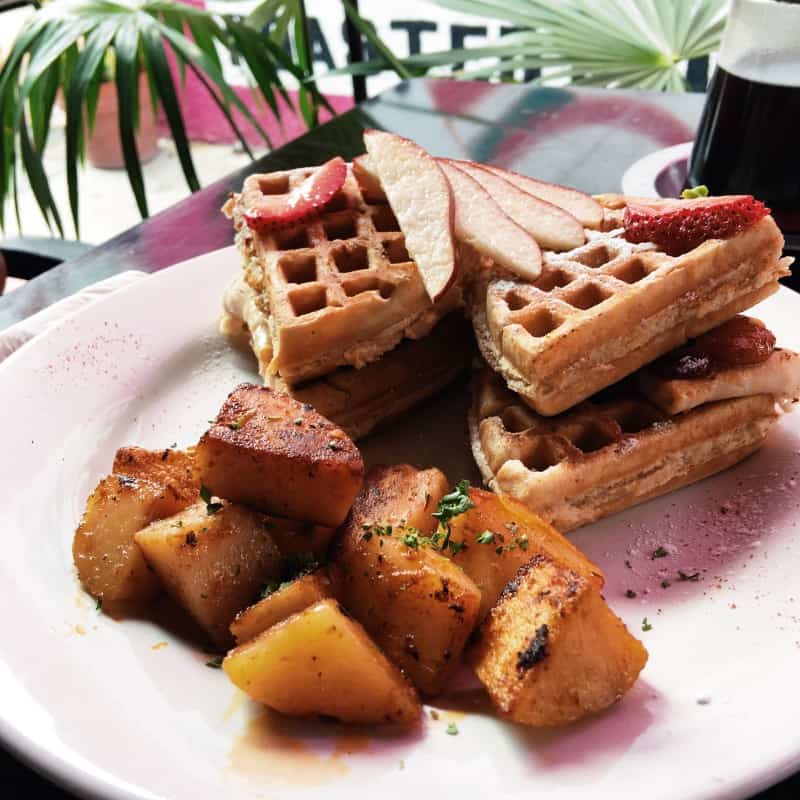 Don’t ask me why I got BBQ chicken on a bagel while I was in Mexico. I still didn’t have my bearings about me. 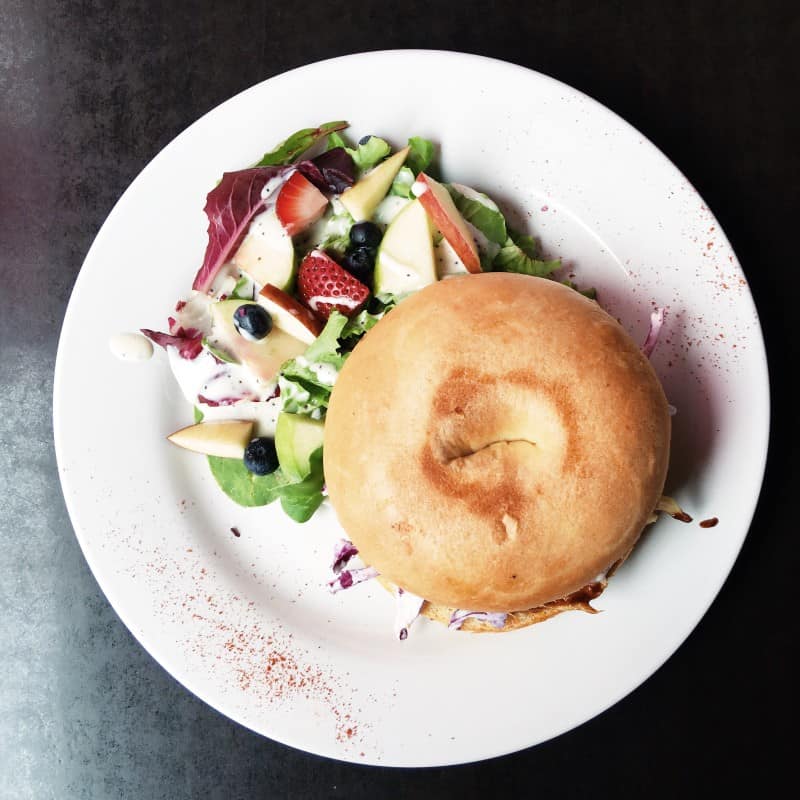 We were really craving fish tacos, so we asked for some recommendations. The locals told us about a place, but we realized too late that the fish was fried. After such heavy meals on Friday, I couldn’t even finish my tacos and I was regretting some of my food choices. 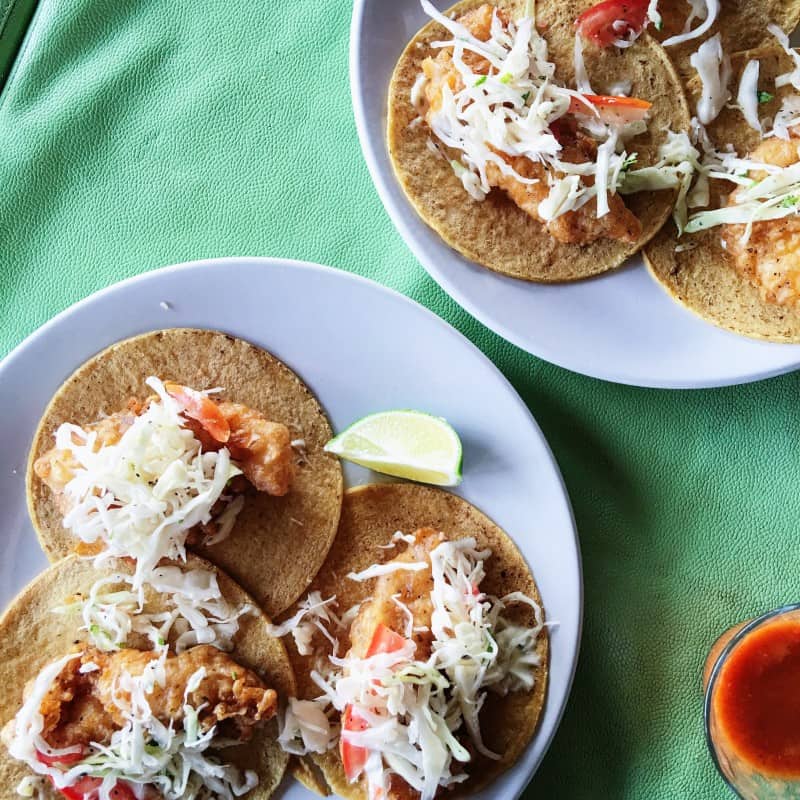 We were super boring on this trip. We woke up early and then went to bed by 9 or 10 pm every night. Since we don’t drink, we didn’t really feel like heading out into the chaos in the evening.

Saturday was a NEW DAY. I couldn’t handle all the fried food anymore, so I went for this delicious PB, apple, and banana sandwich on homemade rosemary cranberry bread. 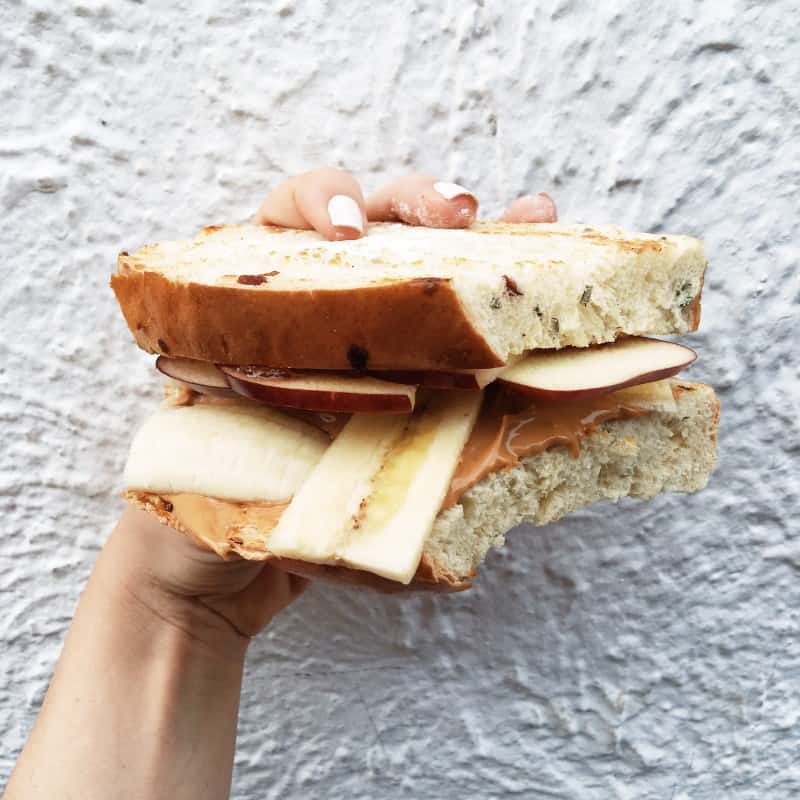 Then I made my way across the street to partake in an advertised smoothie bowl. These mangoes though. 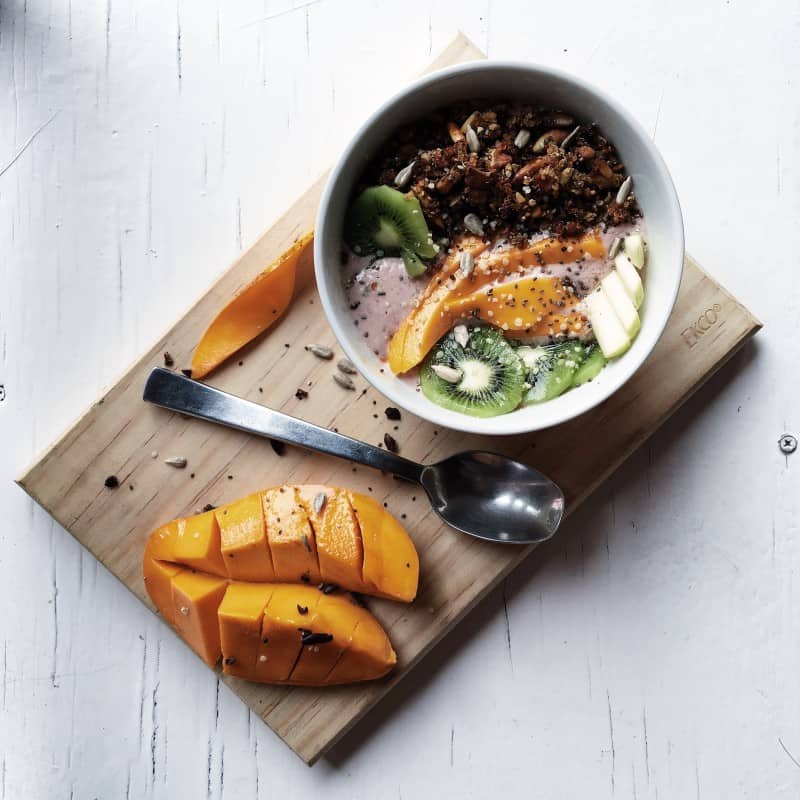 Since the forecast was supposed to be better on Saturday than Sunday, we decided to do our exploring on that day. There are few cars on the island and most of the transportation is via golf cart or scooter. We rented a golf cart and made our way down the coast.

This is the only proof I have of our golf cart. I guess I was enjoying the moments. 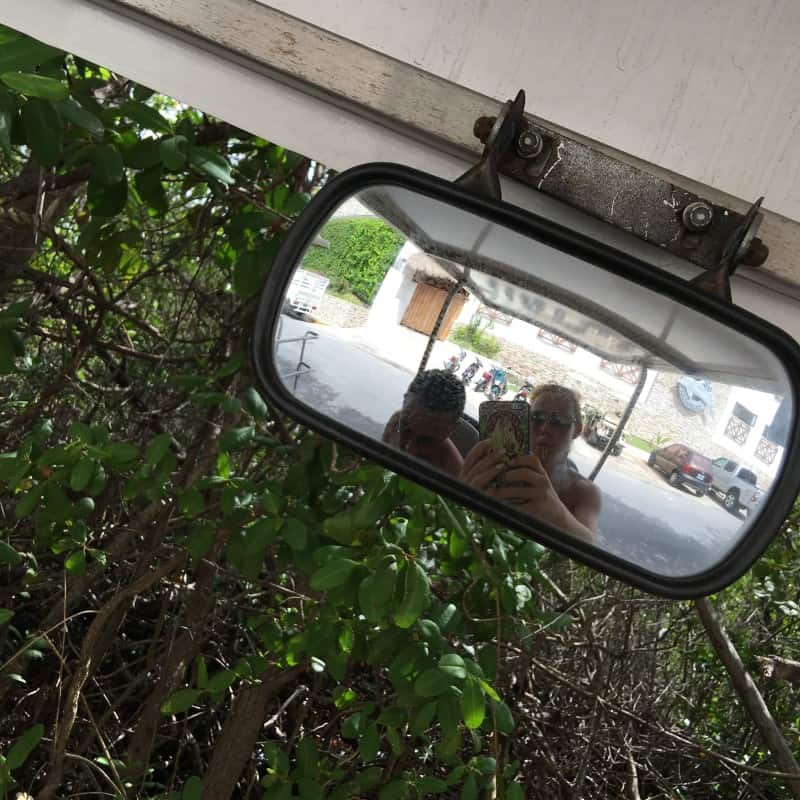 Our apartment was located at the north part of the island, where the majority of the beach area is. The south of the island also held some incredible views, but not as many swimming options unless you wanted to play on these ziplines. 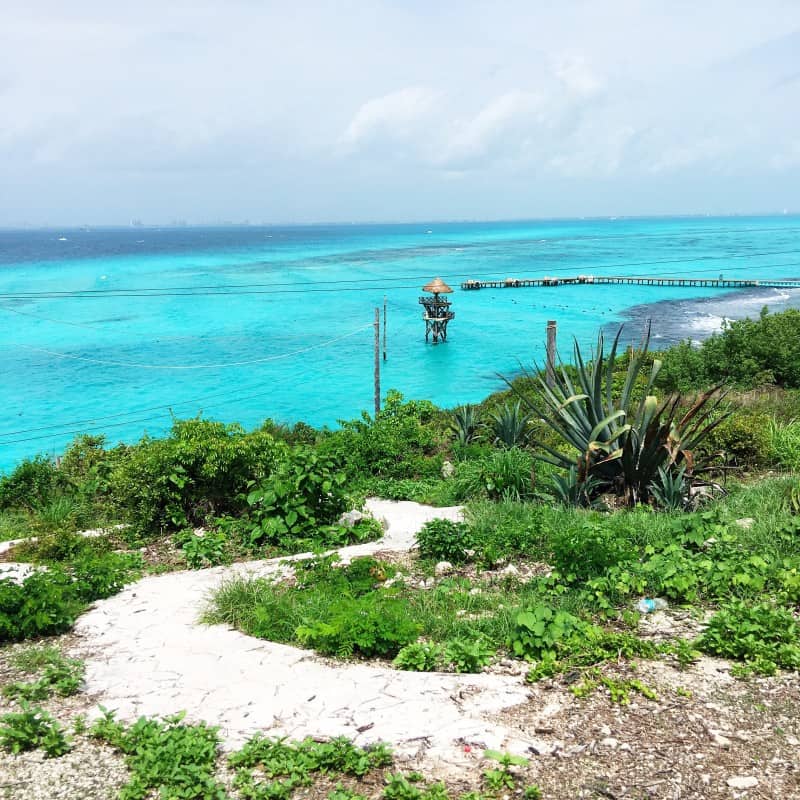 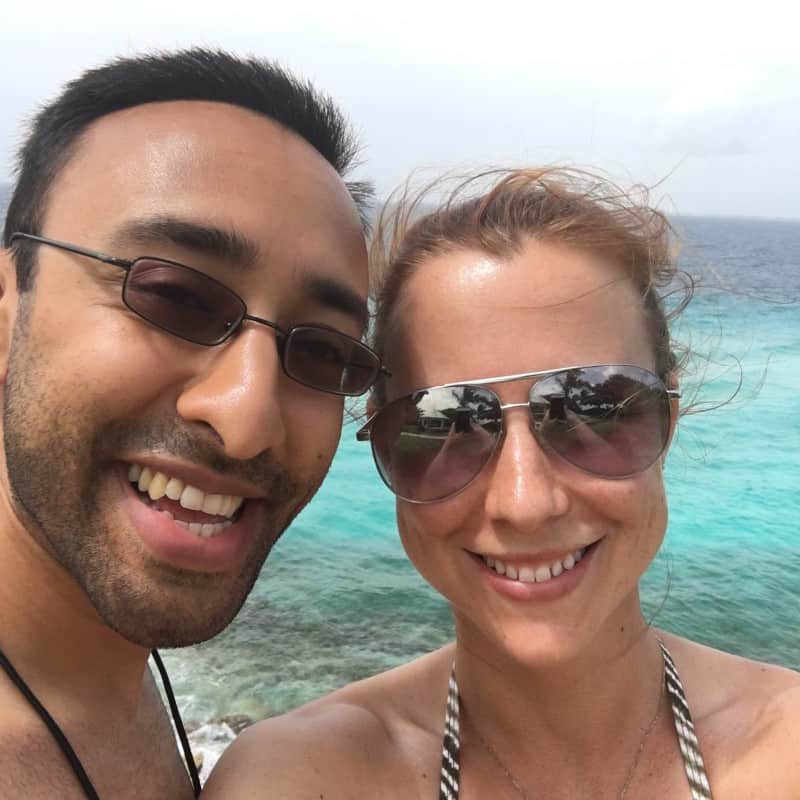 We made it around the island in just over an hour. Upon our return, we were super hungry, so we headed to the place we first ate when we got to the island, Bertha’s.

This was our first eating stop and it really should have been our only stop the entire trip. From Saturday to Sunday, we ate basically the same lunch and dinner: ceviche, ceviche, ceviche. THESE were the kind of fish tacos we were looking for.

At first we split an order of their green ceviche tacos and a bowl of black ceviche with chips, but by Sunday we each had our own plate of tacos and shared the bowl. I’m so hungry just looking at them. 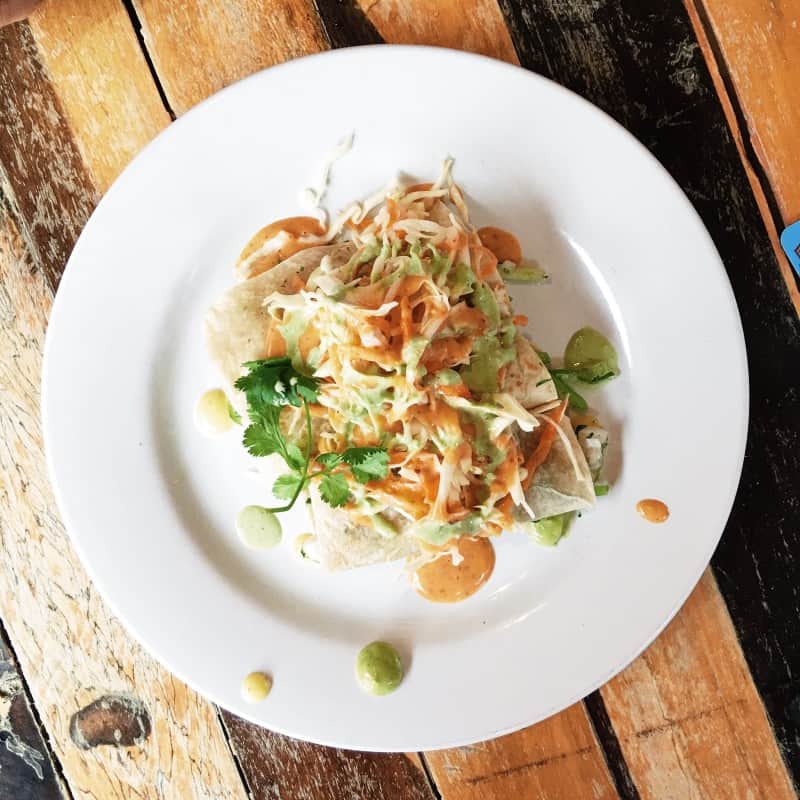 Also after dinner AND lunch both days, I made my way down to the gelato stand where I helped myself to multiple servings a day. I wish these were the portion sizes we had in the U.S. instead of feeling like I’m eating a bathtub full of ice cream. 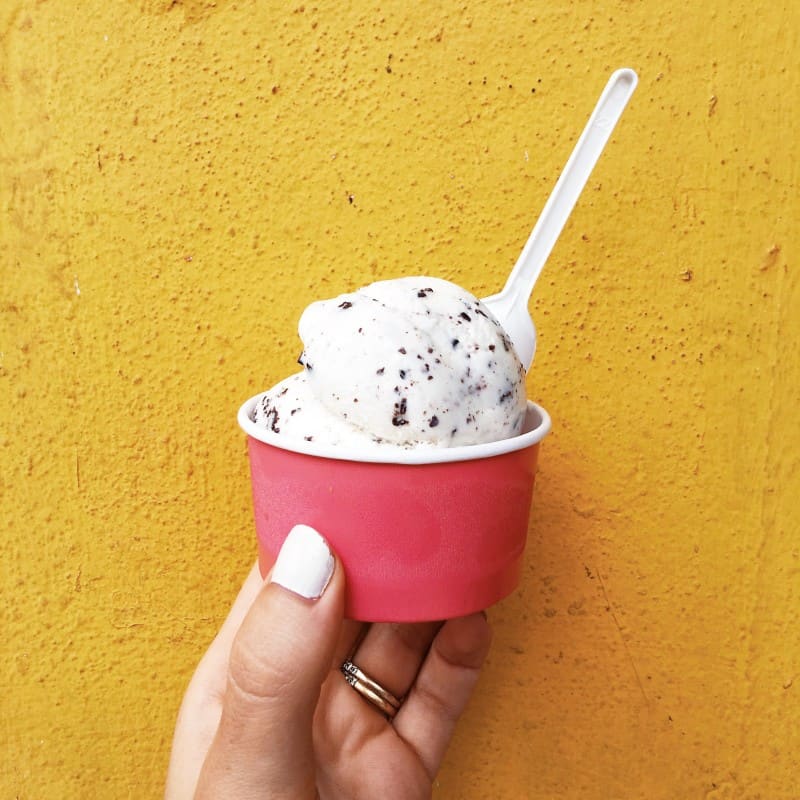 I may have also had one of these for dessert each night. A super thin crepe filled with banana and nutella. It was the perfect combination of chewy and crunchy. 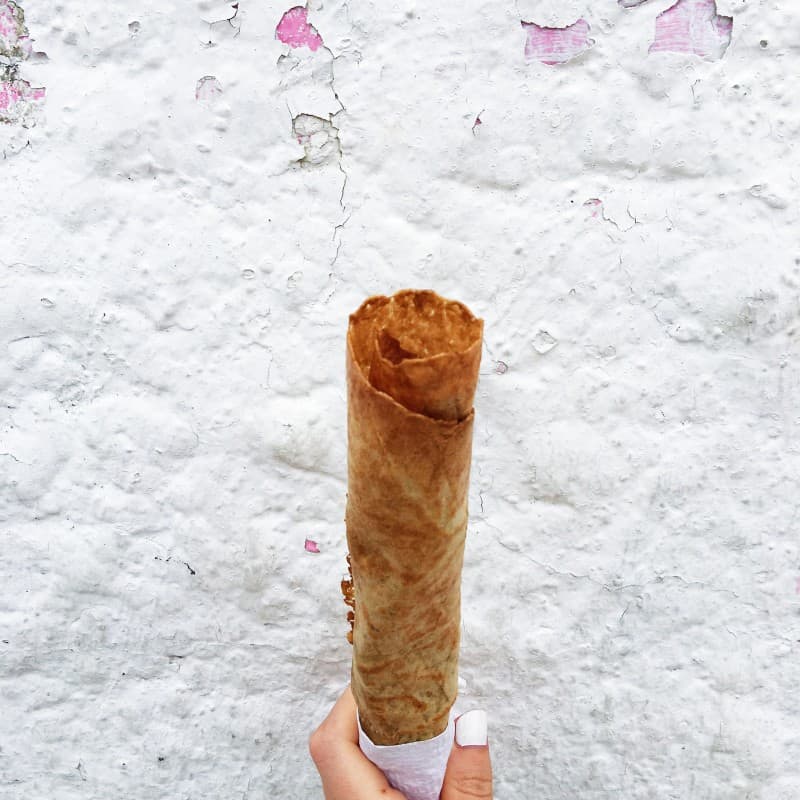 It rained at least once a day while we were there. Luckily, the rain was intense but short, so we just hopped under some shelter for a couple minutes until it passed.

This was Saturday evening, but Sunday, which was supposed to be the worst day of all, actually brought more sun than we’d seen the entire time! 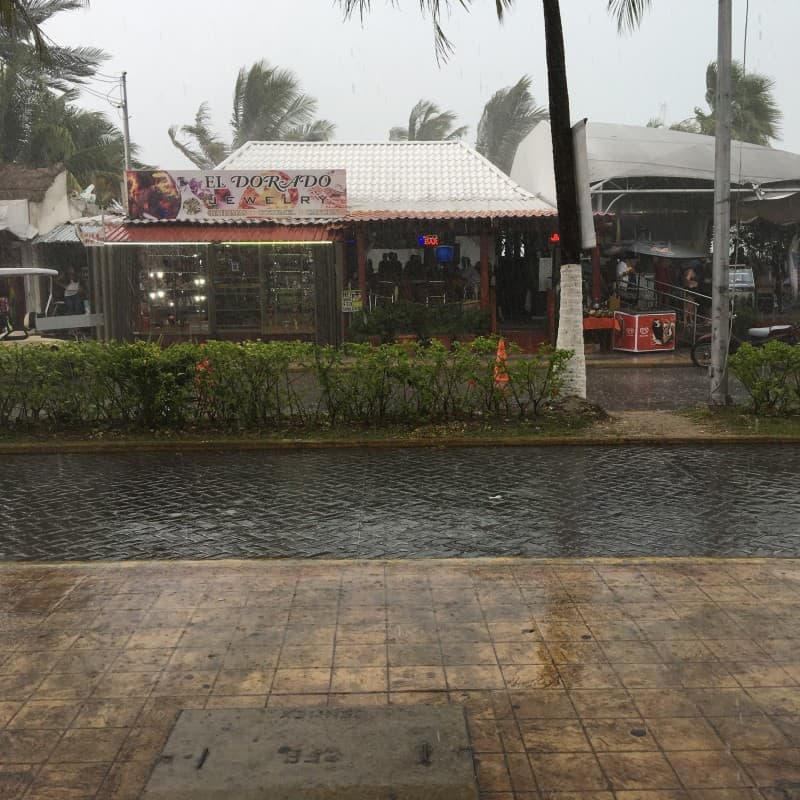 It was a blessing in disguise since I can’t restrain myself while lying in the sun and Mexican sun is NO JOKE. I was slowly getting tanned through the clouds, but Sunday brought some serious skin-scorching rays.

This is what happens when your husband tells you to put sunscreen on and you tell him it won’t matter because you are already slowly tanned by the cloud sun and haphazardly spray some SPF on. 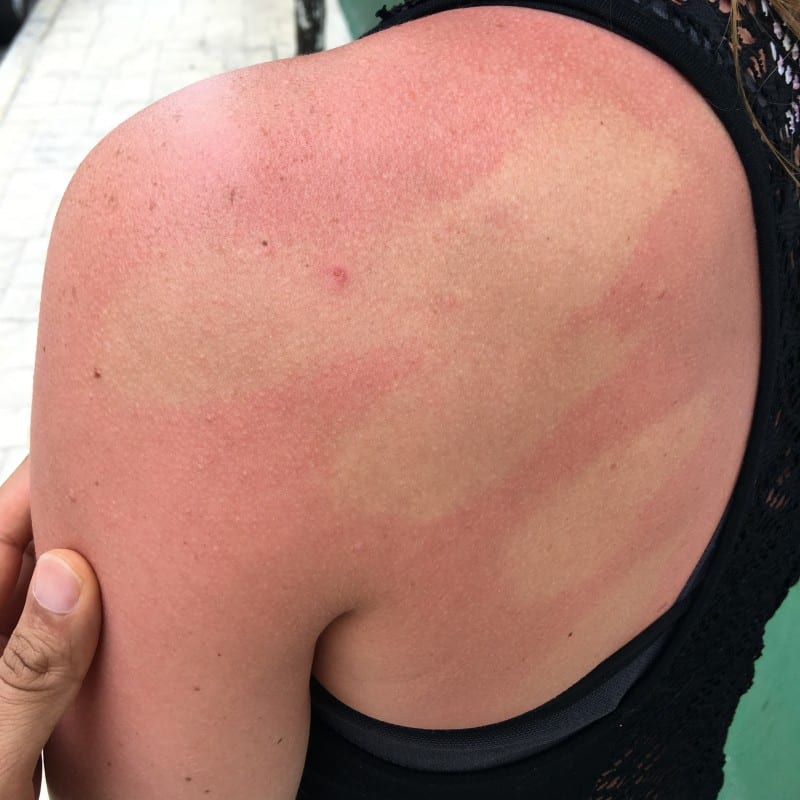 We headed to Bertha’s again for dinner, but this time I opted for their triple cheeseburger. It tasted lighter and more flavorful than any other cheeseburger I’ve had and even though the bun was the size of my head, it was nice and soft. 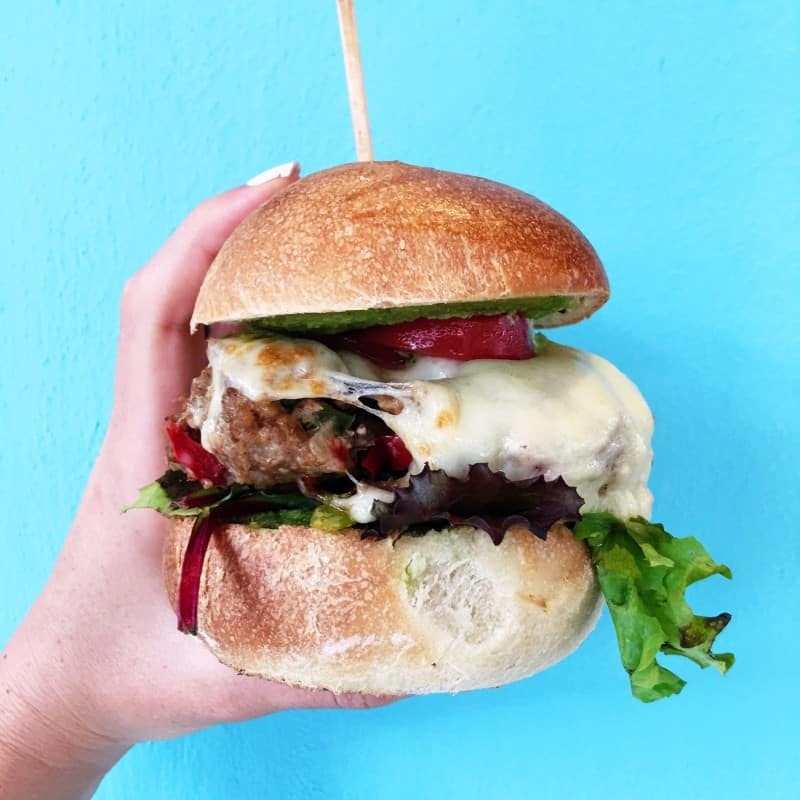 Photo taken by the cutest waitress ever. Seriously, if you’re ever here, go to Bertha’s for some deliciously fresh food. 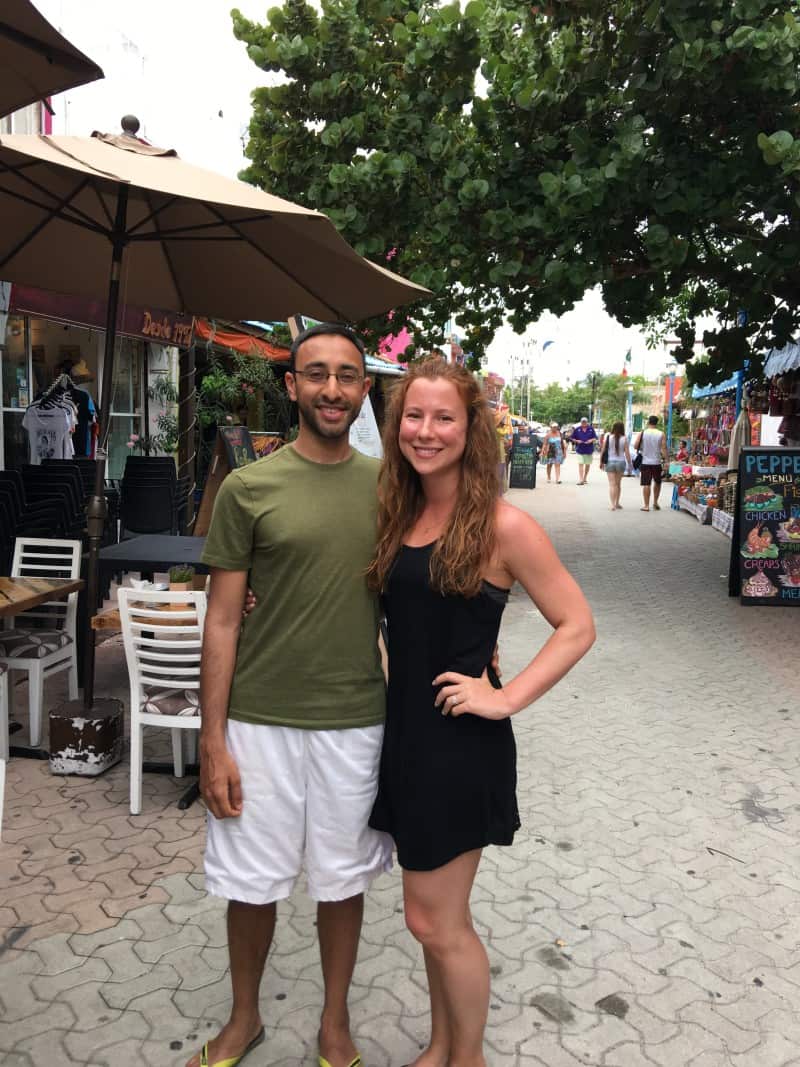 Monday morning we had to catch a 9 am ferry back to Cancun, so we had breakfast at a small yoga cafe. We ate there the day before and they had a great deal on full breakfasts with homemade bread, jam, and all kinds of healthy organic foods.

This cat also seemed to live there (different from previous black and white cat), and really wanted to be friends with Neil. I touched it a little bit, but I didn’t get nearly as much love. Maybe because Neil played cat and acted aloof while I cooed and flopped around like a clumsy child trying to love it. 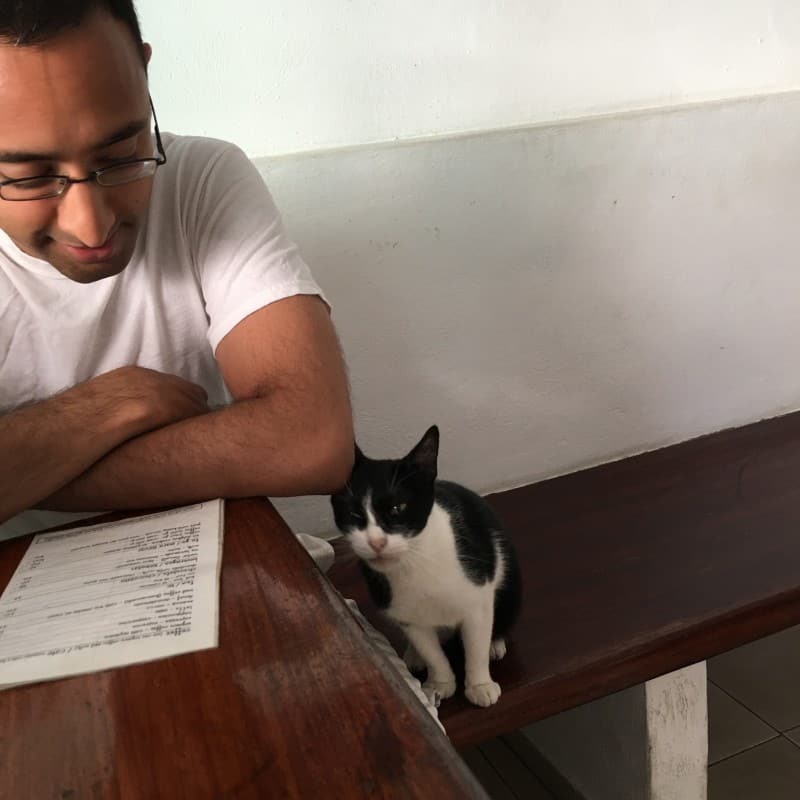 The rest of the trip was pretty uneventful — we made it back to Chicago around 5:30 pm and watched Orphan which freaked us out so much we had to put on 2 Fast 2 Furious and watch half of that before going to bed. This of course meant that waking up at 4:15 am on Tuesday came as quite a shock.

That leaves our next top-ranking options as Punta Cana, Dominican Republic or Montego Bay, Jamaica. Thoughts??