6 Lessons I Learned From 9 Months in Jail

Before we get into today’s post, here is a link to last week’s thinking out loud post. A couple hours after posting I had to put pause on it per a client request, so it didn’t go up again until yesterday. Unless you read it before 10 am you probably missed it, so if you have time, check it out and #speakbeautiful!

If you’re new or just stopping in, a big part of my backstory involves being incarcerated for 9 months as a consequence of thefts I made during my time in active addiction. I’ve talked about the events leading up to it and what happened as I started to build my life up again upon my release, but I realized that I haven’t focused much on the time actually in jail.

I was originally sentenced to 12 months in jail, but due to good behavior and a reconsideration (where you appear to ask the judge to amend the decision), I was released in 9. I served my time in the local county detention center which was limited in about everything. I almost would have preferred going to a prison where you have the opportunity to be released even sooner and are provided with a lot more to pass the time, but I digress.

I wanted this post to be relatable to everyone, so rather than go into detail about the day-to-day process, the focus is more on life lessons that I was able to take away from a negative situation. 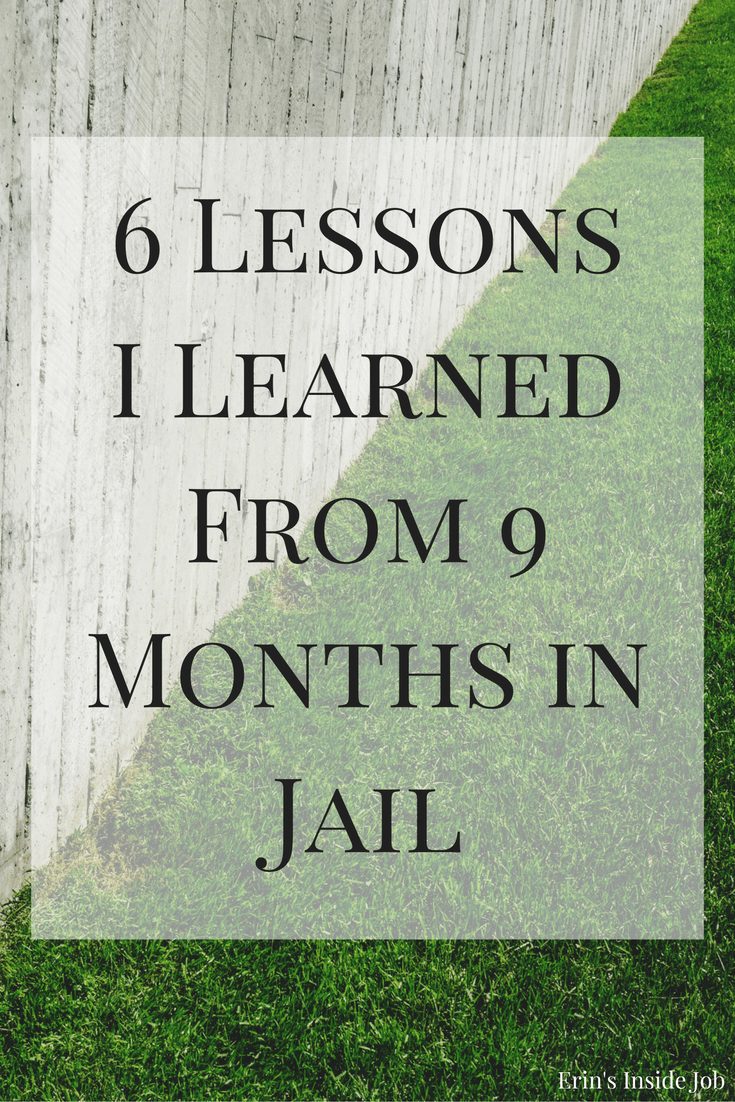 Growing up, I had a pretty big hoarding problem. That, or I was just too lazy to clean my room (or both). I felt like everything was important and I had a hard time throwing things away even if I didn’t play with them or use them very often.

Going to jail changed that. We were limited in the amount of pictures we were allowed to have (10), so if family and friends sent me too many, I had to throw some away, which was hard. Our clothes were taken and we were given state-issued ones unless we bought t shirts with our commissary money. When a girl would be released, it would be like Christmas as we got to go through her clothes (all basically the same shirts) and add something new to our “closet.”

I realized that all the material stuff I had been holding onto as a child and teenager were really just things. I didn’t lose a part of myself by not having toys and knick knacks, in fact, it made me value the few things I actually had. This has made it easier to let go of things as I clean and go through my life today.

2. Everyone has a story

It’s really easy to look at people in jail and write them off. As soon as I got there I told myself I didn’t belong and all of this was a mistake. After some time, however, I realized that everyone there has their own story and a life that has brought them to that point. Some of the stories I heard were heartbreaking and it caused me to have a more empathetic outlook on others in my everyday interactions.

While I was busy judging and setting myself apart from the others in my cell block, I was also failing to accept responsibility for my own actions. Initially, I would think “well yeah, she did drugs and stole, so she’s in jail,” not being able to take the time to realize that that sentence also directly applied to me.

Even though I had been in recovery for over 3 months before being sentenced to jail, I still hadn’t accepted responsibility for what I had done. It took being taken away from everyone I cared about for me to stop blaming the cops, the system, and even my workplace for my own behavior. Once I did that, I realized that these were the consequences for what I’d done and began to accept that.

Related: Stop Playing the Victim and Learn How To Succeed

4. Who your friends are

Megan wrote a similar post about this recently, and I can attest to the fact that once things get hard, you find out who your real friends are. Initially, I received letters from many people in recovery, but as the months went on and they went about their lives, I began to get fewer and fewer.

I don’t harbor any animosity towards those people, and I know it’s hard to keep in touch for so long. The few people I did keep in contact with, however, I still talk to today and I appreciate being there for me during that time.

5. How to make do with what you have

Jail was really boring. Like super boring. We weren’t allowed to have a lot of normal things like nail clippers, razors, pencils, etc. In jail I learned how to thread eyebrows with pieces of string from our jumpsuits and color with deodorant and magazine ads. I’m randomly creative, but this was a whole new level and I loved being able to think outside the box and use things I normally wouldn’t think of to do tasks I normally take for granted.

6. Experiences are what you make of them

I think most people would agree that jail isn’t the most desirable place to be. The biggest lesson that jail taught me was that every experience is exactly what you perceive it to be. I could look back on that time as a huge waste and almost a whole year of my life gone, but I don’t. It taught me to take negative situations and ask what can be learned from them. What positive can be taken away? If I hadn’t learned this lesson, life would be a whole lot more miserable and a whole lot less productive.

The next time life gives you a less-than-ideal situation, stop and ask yourself how you can change your perspective. How can you make it positive? Maybe not in that immediate moment, but how could that event cause you to make changes or improve your life in the future?