What To Expect from Therapy - Erin's Inside Job Skip to content

What To Expect from Therapy

I’ve written pretty openly about my struggles with depression and how going to therapy was crucial in getting through that time.

Although I likely should have gone sooner, I’m one of those stubborn people who thinks that they’ve got everything figured out and if they just think on something long enough, they’ll figure out a solution. I held on for years operating this way, but it was issues with another person that convinced me there are some things I can’t figure out by myself.

The first time I went to therapy it was with Neil. We had reached a point in our relationship where we honestly didn’t know what to do about some long-standing issues we were having. Neither of us could figure out a solution that didn’t seem self-serving, so we decided it was a good idea to bring in a third party.

The second time I went to therapy was in the middle of couple’s therapy with Neil. Our therapist suggested that both of us also start one-on-one counseling since there were things we needed help with individually in order to succeed together.

The third time I went to therapy was when I did a 3-day intensive session that was like 6 months of therapy over a long weekend. The session was also during this same period and to say that the summer of 2015 was a season of mental health would be an understatement.

I went to therapy for several months that year, until Neil and I decided not to separate and I felt more in control of myself as an individual. The thought of going to therapy for someone who has never been or doesn’t particularly see the value in it can be daunting, so this post is to highlight some of the things I discovered and outline what to expect from therapy. Hopefully they will be able to help you if you’re considering it for yourself. 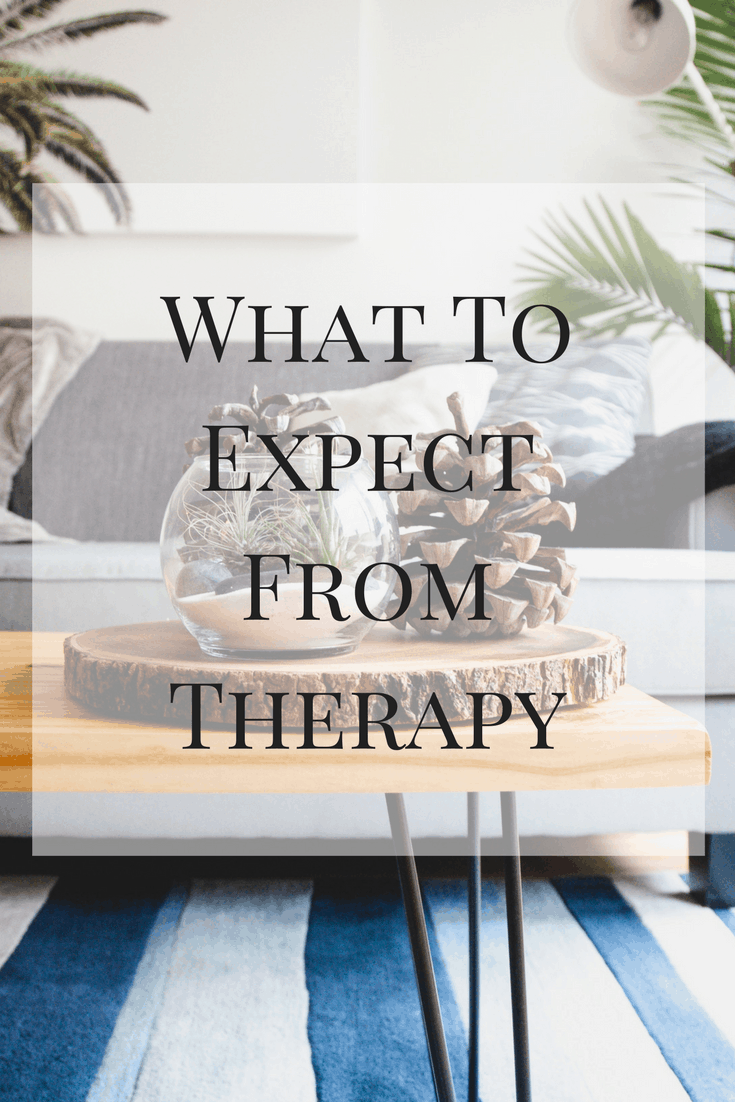 Psychologists and psychiatrists are different

I didn’t know this until I was in college and debating becoming a psychiatrist so that I could help stop the over-medicating of children (in my opinion). A psychologist holds a PsyD or PhD and a psychiatrist is a medical doctor, or M.D.

It’s up to you which one you decide to see. When my psychologist finally suggested I try medication, she was unable to prescribe it to me (although this is not the case in all states). With my insurance, the cost for seeing a psychiatrist to prescribe the medication was astronomical because none near me were in network, so I explained the situation to my family doctor and she agreed to do so. Insurance and providers are different for every person, so choose the option that works best for you whether you need medication or not.

Finding the right one is important

There are many different types of therapy, each with a different methodology to achieve results. Do some research on different types and choose the one that you feel will be the best for accomplishing whatever goals you have.

When Neil and I first went together for our initial session, we didn’t feel particularly great about our assigned therapist. It was nothing against him personally, but it felt like our personalities didn’t quite mesh which meant that had we continued, it would have been hard to feel comfortable opening up about issues we were having. We asked to try another therapist and that one was a much better fit.

Take the time to find someone you feel comfortable with or you’ll likely be disappointed with your results. You should feel like your therapist’s office is a safe space, so if it doesn’t, you may need to keep searching.

It doesn’t have to be for a life crisis

Although that’s what prompted mine, therapy can be as innocuous as talking about things that stress you out on a regular basis. Therapists are equipped with a plethora of tools that you can easily implement in your life for more common issues or they can help you through some serious struggles.

You set the pace and the timeline

Since I’m assuming most you would go see a therapist voluntarily rather than under duress, it means that your therapy is up to you. I’ve heard some people say their hesitation to start is that they will have to go “forever.” While there are certainly people who fall into this group, if you reach a point where you feel like you no longer need help or aren’t getting anything out of your sessions anymore, communicate that with your therapist. I stopped after several months, but I always know that I can go back if I need to.

You’re going to have to work

Therapy is a two-way street. You can’t go in, word-vomit all your problems, and then expect a miraculous cure to solve them all. You’re going to have to complete “homework,” learn coping mechanisms, and potentially have difficult discussions with others. It’s going to get uncomfortable at times. Remember, if it was easy, you’d likely be able to do it by yourself.

One thing that I enjoyed was having an objective party’s opinion. I didn’t always like that opinion, but it helped me gain a different perspective than the one I had, which helped me be more open-minded about what was going on at that time.

Expect a lot of emotions

A lot of things can come up in therapy. This means a lot of emotions can come up as well. For me, I experienced anger, sadness, betrayal, shame, and I’m sure more that I can’t come up with at the moment. While that may scare some people away, keep in mind that I also experienced relief, understanding, forgiveness, hope, and other positive emotions that helped me become the person I am today.

It’s my firm belief that struggles make us stronger and more empathetic, you just have to be brave enough to walk through them.

Struggles make us stronger, but sometimes you need another person’s help

Ultimately, therapy is what you make of it. If you go with an open mind and a willingness to work, your results will likely be more positive than if you remain closed off and defiant. Remember that a therapist’s goal is to help, so try and be receptive to that even though it may be difficult.

I’m interested in your thoughts and opinions on therapy, so feel free to leave them in the comments. As always, if you have any questions that this post didn’t address, send me an email at erinsinsidejob@gmail.com. 🙂

14 comments on “What To Expect from Therapy”