I Want More For Myself - Erin's Inside Job Skip to content

I Want More For Myself

I had a bit of a cathartic weekend.

It was sparked by a book, as most of my catharses usually are.  I have a hard time tuning into my feelings without the gentle nudging of things like literature or movies–something that I am getting better at but still floundering with like a child learning to walk.

On Saturday I received Andie Mitchell’s book It Was Me All Along in the mail. I settled in for a rousing Saturday night of yoga pants and reading, started the book, and finished it 3 hours later. Her book was amazing, no doubt, and in fact you should all go and buy it, but it was the tipping point in what had been rolling over and over in my head for the last week or so. 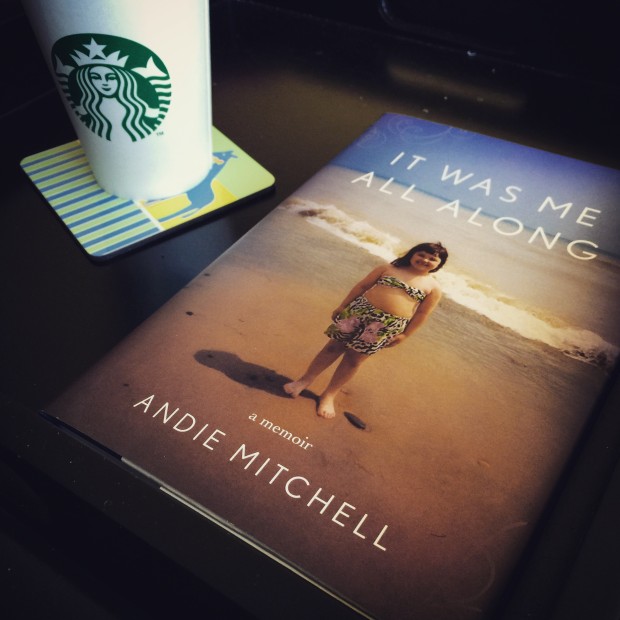 Afterwards, I felt compelled to write, as it is one of my oldest loves, and I was finally able to boil down through writing what I couldn’t conceptualize before.

I want more for myself.

I am constantly in awe of the people I surround myself with–be them real, live human beings that I interact with or those of you whose blogs I follow and admire immensely (but not in a weird stalker way…yet).  I get so much inspiration from you, the risks you take, and your general outlook on life.

I think I turned a blind eye to my potential once I lost my future and my career. Once it became public that I was not the person that everyone assumed me to be, once I no longer recognized who I was, once I lost everything, my desire to excel and achieve seemed to disappear.  I didn’t recognize it at first because getting a job after 9 months in jail is something to be proud of, especially when it’s one outside the only field you have ever worked in and are legally prohibited from returning to. Being able to get any job was a success in my books.

Safety is a funny thing. It stops you from questioning if this is what you really want because there’s the possibility that that could make you feel unsafe. Who wants that? I floated along in my safety bubble for almost 5 years until I made a realization. Then it popped.

My childhood was filled with many achievements, many awards. I don’t say that to be snobby; I say that to emphasize that I was a smart and dedicated child. I was going places. I could accomplish whatever I set my mind to (except physics). In many ways, I was an OVERachiever.

Then my life was turned upside down and I clung to whatever safety and sense of normalcy that I could.  I have had a continuous battle with myself for the past couple years and I haven’t been able to figure out why I can never resolve it. None of the jobs I have had post-jail have made me enough money to support myself. Sure, I could have found some way to get by, but without Neil I never would have been able to live an adult life supporting myself in my own apt/home/whatever.

Now you could say that we are a partnership and that this doesn’t matter. For some people this works fine and I applaud them for it. I tried to join that camp and accept that he is the provider and whatever money I happen to bring in will be icing on the cake, but it isn’t working and hasn’t been working since we started dating.  I told myself that “other people are fine with that arrangement” which meant that I should be too. What I finally realized (for being sharp, sometimes common things take me a loooooong time) was that if I was honestly ok with it, I wouldn’t be experiencing this push and pull for so long.

So, as the title states, I want more for myself. Not because I need to make an obscene amount of money (unless you want to give me some), but because I know I am not working to my full potential and I am taking the easy way out. I am not taking risks because honestly I don’t have to, so why would I want to risk the pain of failure again?  This brings me to my next realization:

I don’t take risks because I’m scared. I’m afraid they won’t pan out, I’m afraid of rejection, you name it. I started this blog because I felt like I had something important to share with people. I spent many years living a double life that came crashing down on me and if I could help one person realize that they didn’t have to live that way, it would be amazing. I wanted to show people that there was another way to live, a healthier way to live, and by changing the way I was living I was able to continuously make amends to myself.

This blog is the thing that I put the most time into. It’s the one thing in my life that doesn’t ever feel like work. For me to say that and to consistently demonstrate it with my actions and then say “if it’s successful that’s cool and if it’s not that cool too” is a cop out.  It’s a way for me to a) not put as much effort into it as I’d like and b) not be let down if it doesn’t work out.  It’s a way to stay safe.

I have always, always loved writing. I want to take time to be more honest with you. I feel like there were many more heartfelt posts in the early days of this blog because things were just spilling out of me.  If I want this to be my livelihood, then I need to commit to that and not back up when I feel vulnerable or that things are getting too hard.  I am still working on all of this, so bear with me, but I wanted to take the time to thank all of you for coming with me on this journey and for sticking around. You make me feel safe (in a good way).

Underachieving and the fear that holds us back: A lesson in wanting more for myself.

20 comments on “I Want More For Myself”