Out of all the emotions out there, I gravitated towards the negative ones for many years.  They made me feel safe and they made me feel in control. I was never more uncomfortable than when I was happy because I spent a lot of my time wondering when it would end than learning to embrace it. I’m continuously learning a new way of life, but negativity is still easier for me to go to since I spent so much time there in the past. For me, one of the most damaging emotions or states of being is that of shame. 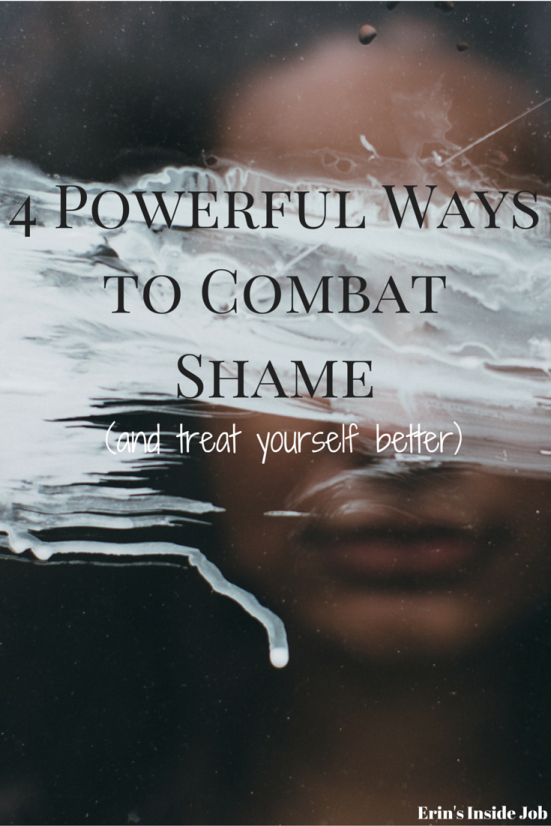 Guilt and shame are often grouped together, but I have learned through recovery and some amazing books that there is a marked difference between the two.

Guilt is an emotion resulting from an action that goes against our morals or values. Cheating on a test, for example, or lying, usually evokes feelings of guilt since both go against our internal sense of right and wrong.

Shame, however, is a lie we tell ourselves that doesn’t even require any action. We tell ourselves we are bad people, failures, never good enough, etc. While it has been shown that guilt can actually be a positive emotion as it causes us to correct our behavior and realign with our values, shame often has no positive follow-up associated with it. We continue to chip away at our self-worth until is it hard to remember anything we do well.

Guilt speaks to outside events or actions, while shame is an internal, sometimes unprovoked battle. It drives right to the core of our humanity and self-worth.

The next time you find yourself having a negative reaction, figure out whether it is a guilt or shame reaction. If it’s shame that’s come to knock you down, try these 4 steps to avoid it:

1. Identify shame as soon as it happens

For me, shame feels like both a heavy, crushing weight and being fully exposed at the same time. When I have a shame reaction, I feel as though the entire world can see every imperfection I have and rather than let them tell me, I am first to run and pick up the bat. If I can shame myself more than you can shame me, somehow I think it won’t be as painful.

Here’s an example from last week. Neil and I have been talking about making more dinners at home. On Sunday, I decided to make a big meal in the crock pot so that we would have leftovers for the week. I quickly pulled up a recipe online, we went shopping, and I threw everything in to cook. When it came time to take out the meat, I shredded it and noticed that it seemed a little dry. I also didn’t cover it entirely after shredding which dried it out even more. When it came time to try and eat it, it was edible, but not soft and tender like most crock pot meats are. Neil was disappointed and I immediately went into a shame spiral.

“I can’t do anything right.”

“I can’t even put meat in a pot which does all the cooking for me!”

“I can’t cook ANYTHING so why would someone want to be with me??”

All of these things are ridiculous, but in the moment it was where I went because it is what I know. It’s what is familiar to me. Neil neither said any of these things, nor thought them. He just wished he didn’t have to eat pork jerky for dinner and truthfully, who would? Since it took me awhile to follow these steps and wade out of the shame, however, a meaningless disagreement followed because rather than laugh about it, I decided to turn it into a mini melodrama.

What’s funny is that most people aren’t out to shame me. When I make a mistake, most people end up standing around quizzically looking at each other as I shove them out of the way and frantically grasp for that bat they can’t even see.

2. Pay attention to the words you are using to talk to yourself

The negative things we say to ourselves can sometimes become so normal that we don’t even realize we are doing it. Once you have identified your reaction, stop and pay attention to what words or phrases  you are actually using. Write them down if you have to. Notice how damaging those thoughts can be. Can you imagine saying them to someone you care about? Why are you saying them to yourself?

3. Tell yourself the opposite of what you are thinking

Sometimes it is easy to see how irrational our self-talk can be, but other times it has become so ingrained in us that we truthfully believe it. Thankfully, I have gotten better at understanding the absurdity of what I tell myself, but in the beginning there was such a lack of connection between what I was feeling and thinking that I didn’t even know to question it.

When I tell myself that I am a failure, I point out how many accomplishments I have achieved.

When I tell myself that no one should love me because I’m not perfect, I remind myself that there is no perfect and that being so would take away what makes us unique and individual.

Sometimes it takes actually saying these things out loud for them to register. Don’t just say them once; yell these messages to yourself! If any kind of negative self-talk has been a pattern for you, it’s going to be hard to drown it out. Every time a negative message comes up, be prepared to flip it around.

Battling with yourself is exhausting. Take some time to breathe and slow down. Everything will be ok. Everything IS ok. You. Are. OK.

Try these 4 tips to combat shame and learn to treat yourself better!