My Struggle For A Healthy Lifestyle

My health journey spans well over 10 years. There have been ups, downs, and lessons every step of the way. It can be easy to jump into reading healthy living blogs or look at fitness instructors and think that that drive and motivation comes naturally, but that isn’t always the case. I wanted to take time today to chronicle my own journey so that you are able to see how this is always a process and with each setback there is a lesson to be learned and an opportunity for growth. 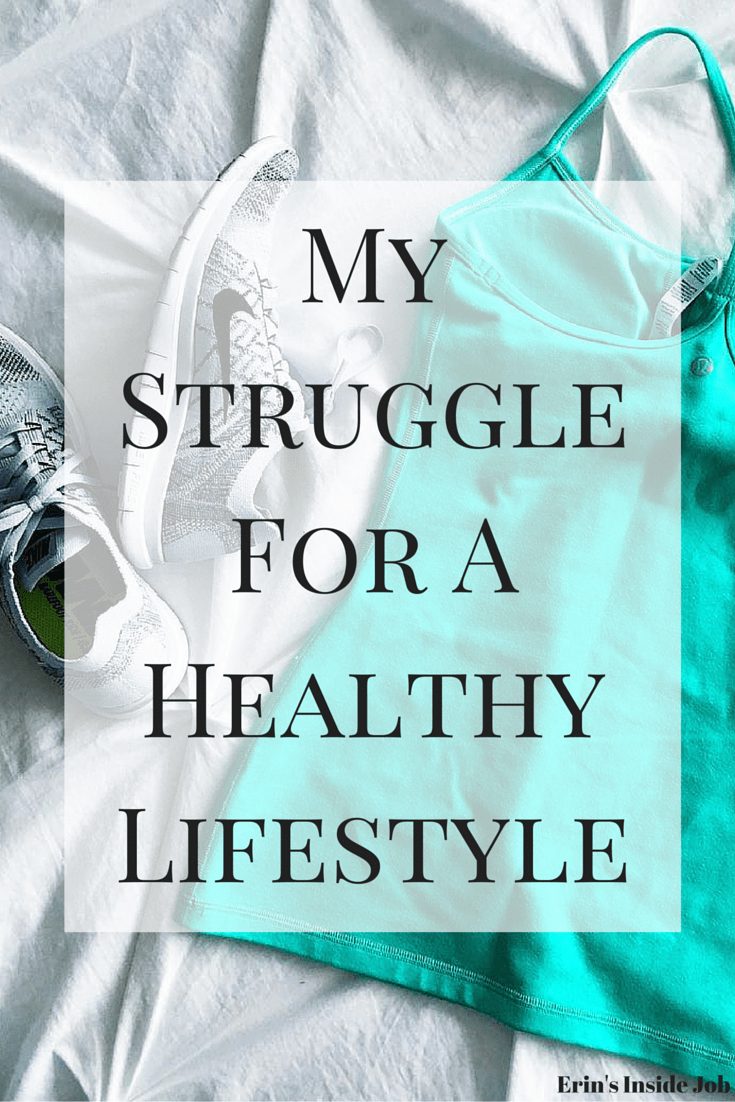 1998-2002: I first became cognizant of my health when I was in high school, but it wasn’t a huge focus and I wasn’t exactly sure what I was doing. I was on the soccer and swim teams for a couple years, so I was forced to exercise on a regular basis. It was awful (at the time). I realized I was horrible at running so I tried making myself run until I got better.

2002-2005: I entered college and had no interest in sports or exercise. It was at this point that I discovered drugs and alcohol, so a lot of my free time revolved around that. I stayed up far too late and definitely didn’t get 8 hours of sleep (unless I skipped my early classes). 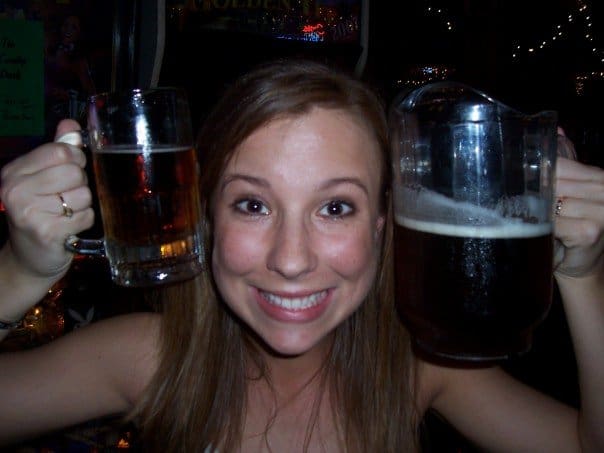 2005-2007: I graduated college, but decided that I wanted to go to pharmacy school. That meant I had to go back to school to take two years of science prerequisites to apply. During this time I moved back into my mom’s house and developed a routine of exercise, class, and work. I would wake up at 4:45 am, drive 20 minutes to the gym, run 5 miles, then lift for 30 minutes. I did this Monday through Friday. It wasn’t always unhealthy at this point, but I would get upset if I wasn’t able to get a workout in. 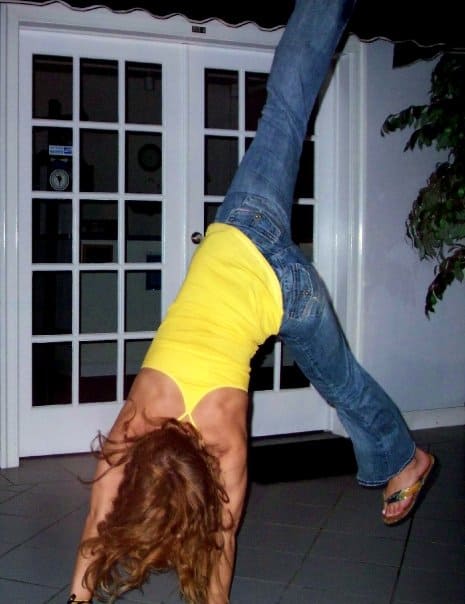 2007-2008: When I was accepted to pharmacy school, I moved out of my mom’s house into my own apartment. I wanted to keep up a healthy lifestyle, so I started using the fitness center at the complex and buying healthy groceries at Whole Foods and Trader Joe’s. At some point after relocating, my health obsession went too far. In retrospect, I believe I was scared and uncomfortable living on my own for the first time and my way to cope with that was searching for control wherever I could.

I worked out every day, only ate healthy foods, and would often wake up in the middle of the night to exercise if I was having trouble sleeping. Again, I ended up in good shape, but the way I got there was very unhealthy. I also don’t have many pictures from this time in my life because I was beginning to isolate myself from everyone.

2009: I did a complete 180. I had started to get deeper into my drug and alcohol addiction which meant there was no time or interest in working out. I picked up smoking again which I had started in college. I was drinking every day and eating whatever was quick and convenient. This meant a lot of Wendy’s which was right across the street and Taco Bell because, well, it’s delicious. I would also buy gallon cartons of Cold Stone ice cream and eat them on the couch while watching TV most of the day.

I know that heroin is supposed to make you lose weight, but apparently that effect was lost on me. Those cheeks tho.

2010: I got clean on May 20, 2010. Simply stopping all my drinking, using, and lethargy helped me lose some weight. I wasn’t ready to tackle an exercise plan just yet, however, and in three months I would end up being sentenced to 12 months in jail.

2010-2011: Obligatory incarceration for 9 months. Sorry, no pictures 🙂 My nutrition suffered terribly because I hated the food and I obviously wasn’t happy about where I was. I would sleep through breakfast, sometimes each lunch if it was something I could tolerate, and sometimes eat dinner. Most of the time I would rely on the food I bought from commissary which consisted of 25415677 brownies and other sweets. By the time I was released, the clothes I came in with were way too big for me.

2011-2012: After being released from jail, I gained back some of the weight I had lost. I wasn’t working and had very little money, so again my eating habits were awful. I loved getting $1 bags of animal crackers at the Dollar Store and going to town. I smoked around a pack of cigarettes a day (again) and decided that if I wanted to exercise it wouldn’t make sense for me to do so while I was smoking, so I didn’t bother. I moved in with Neil in September and quit smoking later that month.

We joined a gym in November and when I discovered they had a cardio cinema, I would lose myself for hours at a time on the treadmill.

2012: The end of 2011 and beginning of 2012 started my struggle with obsessive exercising and food control. It developed slowly and ended when I injured myself running two 12 mile days back to back. I had learned to abuse food and exercise the same way that I did drugs and alcohol, and it took reaching out to others for me to get the help I needed. You can read about this struggle more here and here.

I was in good shape, but the obsession with it was very unhealthy and eventually left me injured. You’re welcome for this face. 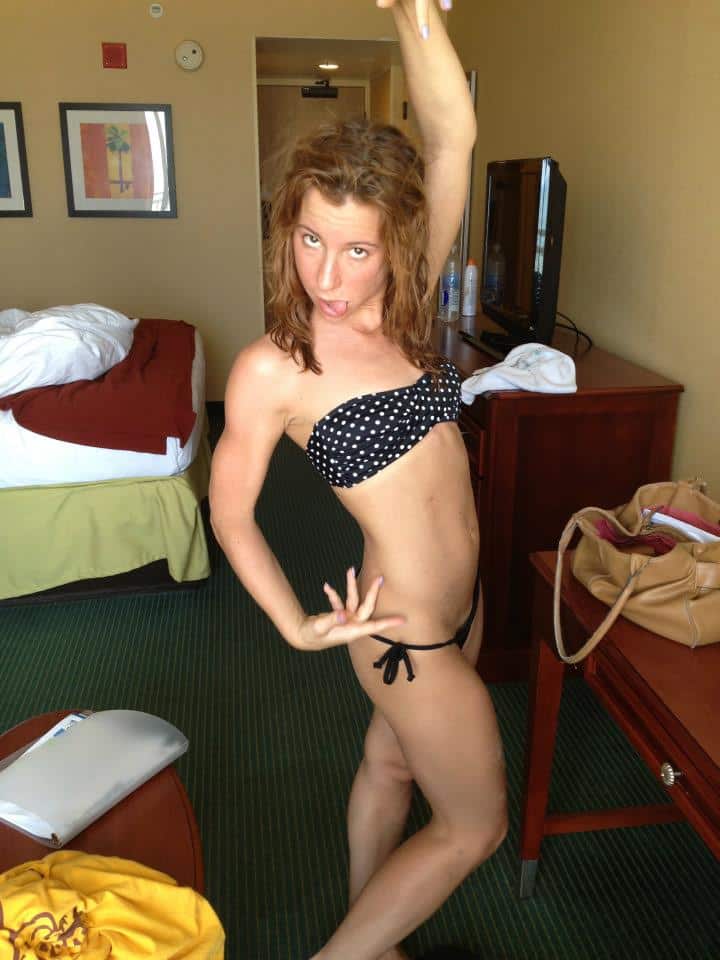 As you may be able to see, I had bags under my eyes and my arms were much thinner than they normally are. 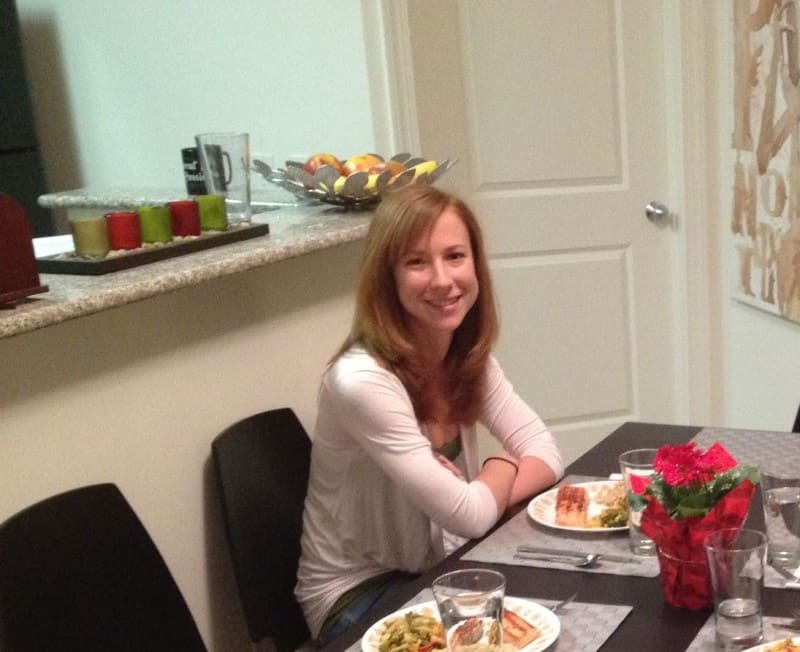 2013: By the end of 2012 I had stopped my obsessive exercising and food control and took a much more manageable approach to exercise. I cut back on the number of days I worked out and I made sure to check in with others about what I was doing. I focused mainly on running and took it easy to make sure that I didn’t start abusing it again. I got in shape for my wedding, but did it in a reasonable and healthy way.

I don’t know what was happening here. I think I was saying things? 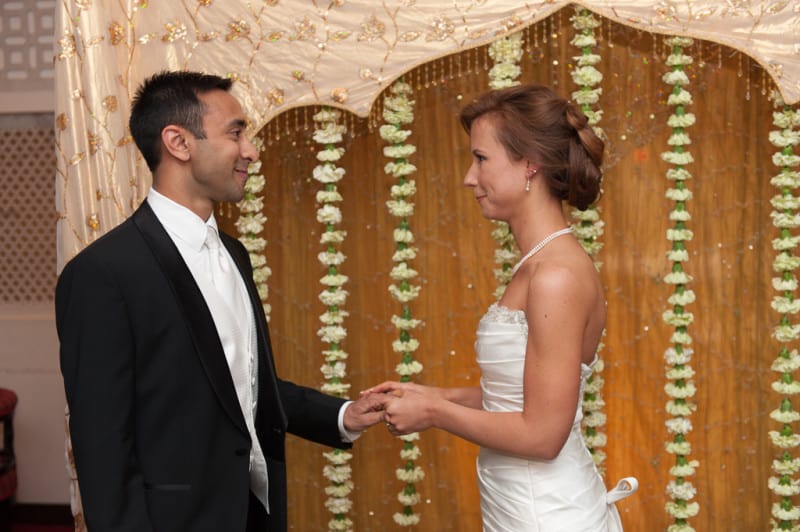 2014: I really enjoyed running despite my high school self hating it and I ran a couple races in 2014. I started out with a 10K, then a 5K, and finished it up with my first half marathon that September! 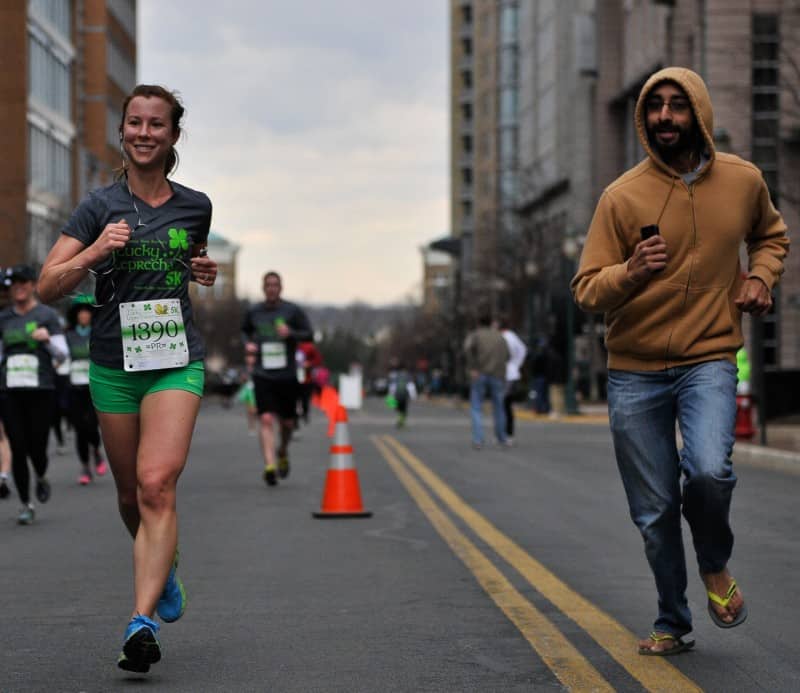 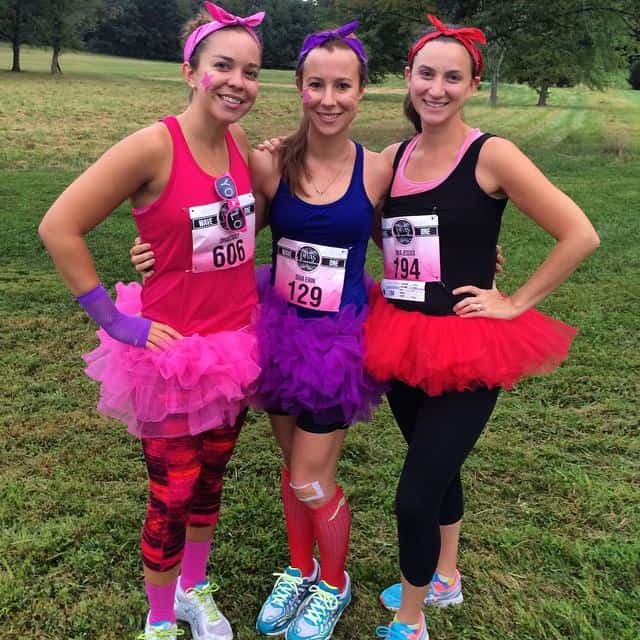 2015: Last year brought a whole new understanding of health fitness for me. I became certified as a personal trainer, started coaching at Sweat, and FINALLY figured out a balance in my eating habits. I decided to take a break after three half marathons (two of which I intelligently didn’t prepare for), and since then I’ve found my favorite workouts in high-intensity and strength training.

I know from experience that restricting what I eat only leads to obsession, compulsion, and bingeing on those things, so I find a balance between what is reasonable in my weekly meals. I give myself maybe a little more leeway than some people because it could be so easy for me to slide back into unhealthy behaviors. If it’s between a donut or the possibility of obsessing over whether or not I should eat it, I’m going to eat the donut. 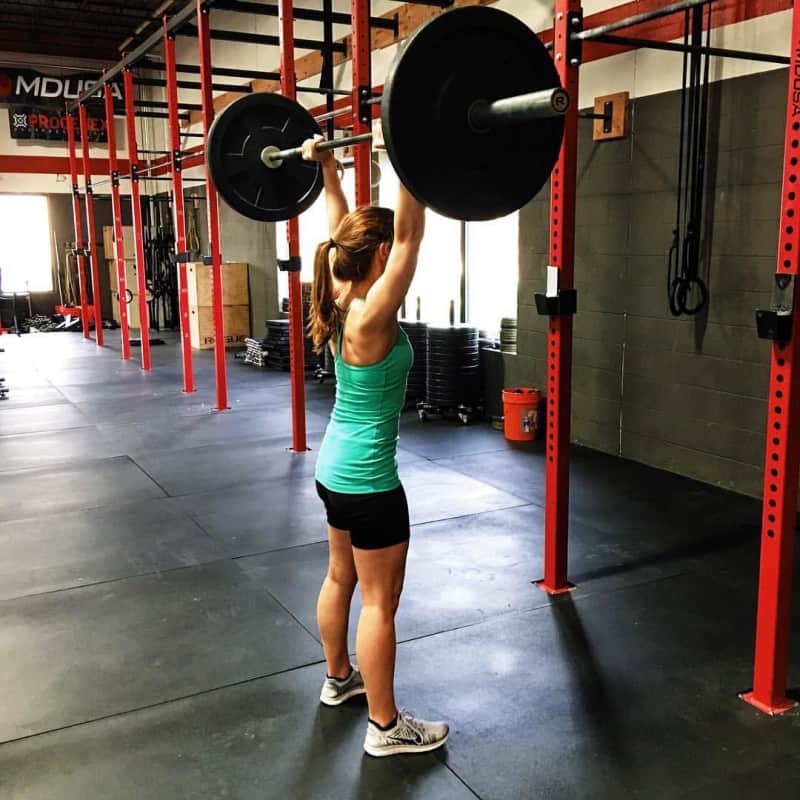 2016: Going forward, I can only hope that I’ve learned from my mistakes and struggles. I can’t say for certain that I won’t ever get off balance again, but I think I am in the healthiest place mentally and physically than I have ever been. I know what my triggers are and how to examine what is going on internally to make sure that I don’t fall off track. As long as I continue to stay vigilant about those things, I can only see positive improvements in the future.

I know that my story may be a little more extreme due to my struggle with addiction, but I wanted this timeline to illustrate that it’s usually never a linear path to a whole and healthy life. Everyone has struggles and everyone has setbacks. It’s how you approach them and choose to proceed that matters. No matter where you are in your journey, there’s always something to learn about yourself and there’s always a way to improve. Keep working!

It’s not always easy. See the ups and downs of a healthy lifestyle. #sweatpink #fitfluential

DON’T FORGET! The DAVIDs TEA giveaway ends tonight at midnight. Get your entries in here!

41 comments on “My Struggle For A Healthy Lifestyle”